It is not that unusual in Europe to come across old, medieval, or even ancient archaeological sites during construction work. However, it is unusual to find ancient sites in virtually untouched condition. This was the case recently in Rome, Italy.

Logically, the older a site, the less likely it is to have survived wholly intact. Soil conditions, weather, agriculture, later settlements, and simply the passage of time all play a part in the erosion and disappearance of evidence of our collective past.

So archaeologists were particularly excited when this most recent site was exposed in Case Rosse, an area to the west of central Rome. A bulldozer was being used to lengthen an aqueduct when the discovery was made. Workers found what is now being called the “Tomb of the Athlete”: the undisturbed remains of four people including 3 men in their 30s to 50s and a woman of unknown age. 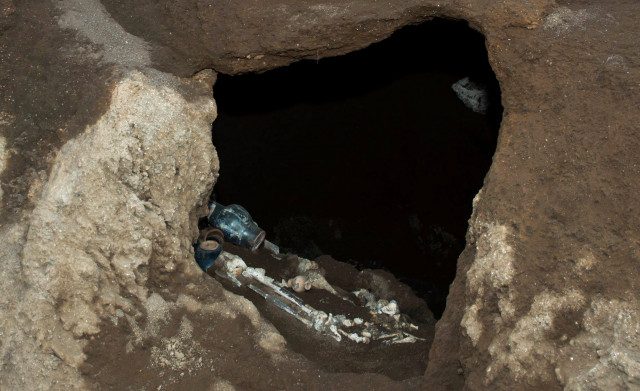 Entrance to the tomb. Photo by Soprintendenza Speciale di Roma

The earthmover had opened a hole in the side of a burial chamber. According to Rome’s special superintendent with archaeological oversight, Francesco Prosperetti, “had the machine dug just four inches to the left, we would have never found the tomb.” Being a nation with ancient roots, all significant construction projects in Italy require the presence of an archaeologist. Fabio Turchetta had been onsite with the project for around a year, but almost nothing had been dug up until the discovery of the tomb. And it had definitely been worth the wait.

It is estimated that the site dates from between 335 and 312 B.C. – when the Roman Republic was in its prime – based on a coin that was found next to one of the skeletons. The coin shows the head of Minerva on one side, and a horse’s head on the other with the word “Romano.”

In addition, there were a variety of dishes and jugs, as well as what would have been offerings of food such as rabbit, lamb or goat, and chicken. Two strigils were also found. These hook-shaped objects were used by Romans to remove dirt and excess oil in the baths. Moreover, they are strongly associated with athletes to scrape perspiration from the body, hence the name of the tomb. 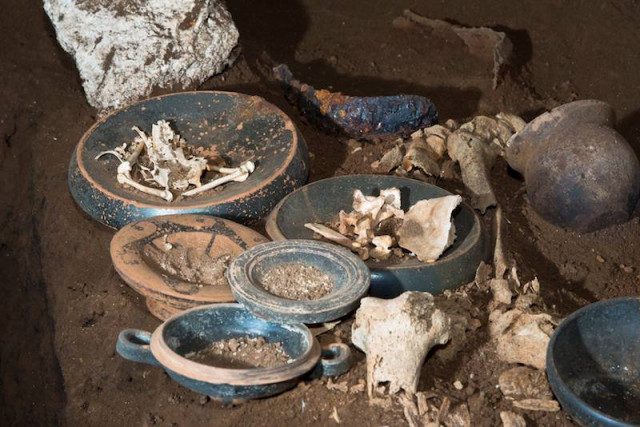 The quality of the black-glazed pottery found inside the tomb suggests that the occupants may have been quite privileged, according to Stefano Musco, the scientific director of the archaeological dig.

Researchers are in the process of retrieving the bodies from the tomb, after which they will be analyzed and have their DNA tested in a lab to establish whether or not they are related to one another. Alessandra Celant, a paleobotanist from the University of Roma La Sapienza, has taken pollen and plant samples from the tomb to determine the flora of the area when it was built. The site has been mapped with a laser scanner, and once excavations are complete it will be sealed up. 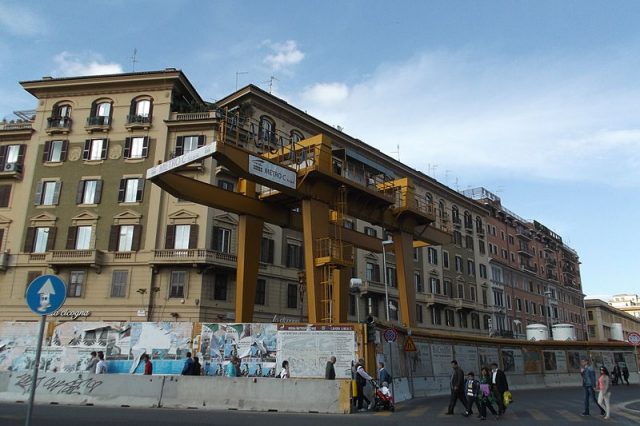 That the tomb was untouched is unusual, particularly as this area of Rome had been heavily surveyed and excavated in the past. What is more, the volcanic rock typical of the area in which it was found is quite porous. The organization in charge of looking after Rome’s heritage, the Soprintendenza Speciale di Roma, plans to go over the newly discovered contents in detail.

Read another story from us: Construction of a new subway line in Rome brings thousands of precious artifacts to light

In the past, construction work in other areas of Rome has uncovered frescoes, catacombs, and even entire buildings. During work on the Metro Line C, a military barracks and what might be Rome’s first university were exposed. Some of the artifacts found can now be seen as commuters ride the metro in the San Giovanni subway station – proof that we never know what is under our feet in these ancient, and historically rich, cities.

« McKamey Manor: “Extreme Haunted House” is not for the Fainthearted
The Ancient Tribe that Defeated Cyrus the Great had Seriously Barbaric Rituals »