Italians are generally renowned as excellent shoemakers throughout the world. Their products are usually placed in a more luxurious category as their designer shoes tend to cost a bit more an average person can afford.

However, their predecessors on the Italian Peninsula ― the Romans ― were known as gifted shoemakers as well, apart from being ingenious engineers, architects, and sculptors.

Moreover, Roman footwear wasn’t only functional but was fashionable in a sense to which we today can relate. 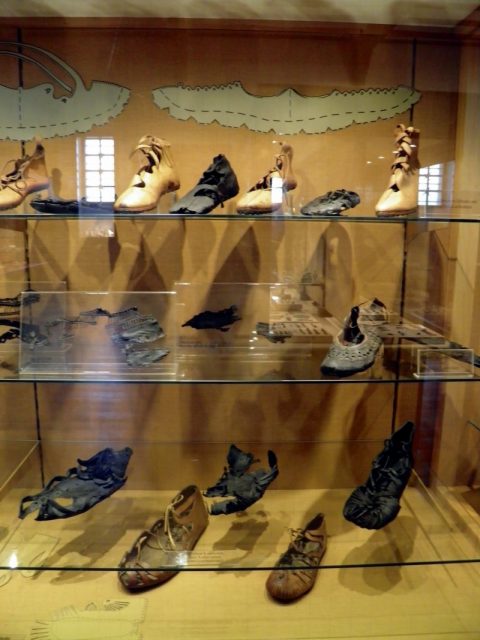 A recent discovery from an archaeological locality of Saalburg, Germany, confirms that the Romans indeed neatly crafted women’s shoes, which, apart from providing protection and warmth, were also very stylish and presented a status symbol among citizens.

The discovery at Saalburg is just one among many, for this site used to be a significant Roman border outpost on the very frontier of the Empire. Built around 90 AD, it also served as a settlement that at its height reached around 2,000 inhabitants who lived both within the fort’s walls and in the village which grew around it. The fort remained active until 260 AD. 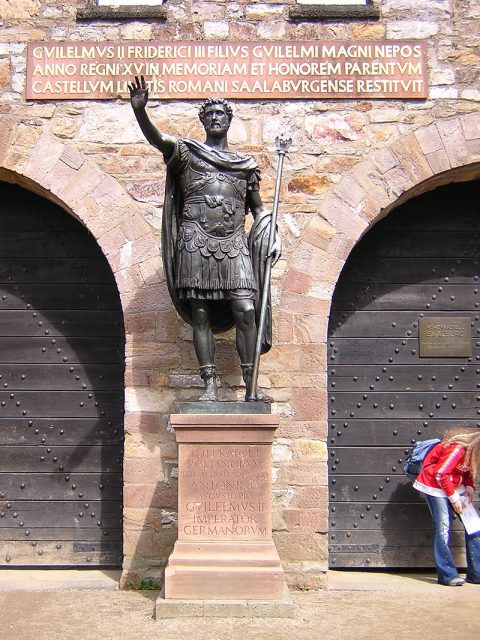 Statue of Antoninus Pius at the entrance of Saalburg. Photo by Dominic Z GFDL-CC-BY 2.5

Since 2005, Saalburg has been put under UNESCO’s protection as a World Heritage Site and the fortress has been reconstructed using known data about its prior shape and form.

As for the shoe, it was found in what used to be a well within the ancient settlement. Today the 2,000-year-old piece of footwear stands as part of a regular exhibition in the Saalburg museum.

Based on the standard-issue Roman military sandal/boot, called the caligae, the Saalburg shoe has a heavy sole, implying it was made for outdoor use, as opposed to the more lightly-soled indoor slippers which were also known to be popular among the wealthier inhabitants of the Roman Empire. 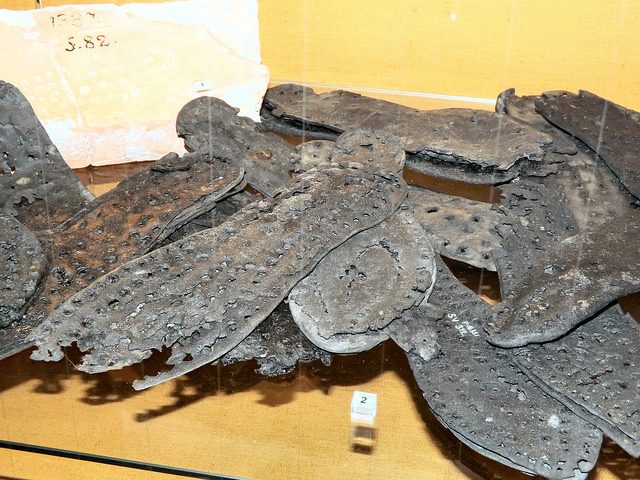 The design is similar ― apart from the sole, the Saalburg shoe includes holes for laces, which were predominately used by women. As is typical for most Roman footwear, it has a leather upper and a hobnailed sole, providing both comfort and functionality to the wearer.

The embroidery is crafted in great detail, once again implying this was most probably a shoe belonging to a wealthy person. Patterns including triangles and circles add to the beauty of this shoe from another time, displaying its maker’s skill, but also its owner’s social status, as merchandise of this standard certainly came in a steeper price range. 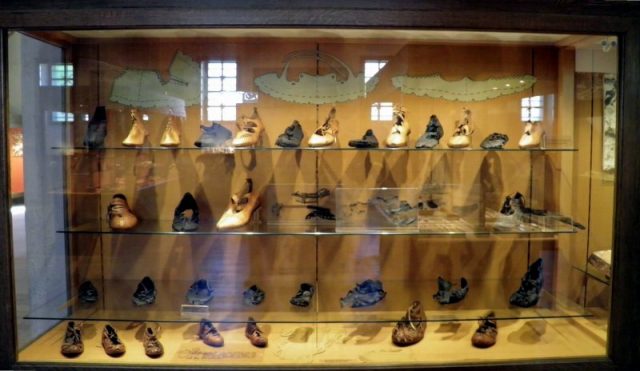 According to Rome Across Europe, a blog dedicated to Roman culture, the ancient civilization of Julius Caesar, Cicero and many others actually introduced the Mediterranean world with the first entire-foot-encasing shoe:

“Many had large open-work areas made by cutting or punching circles, triangles, squares, ovals, etc. in rows or grid-like patterns. Others were more enclosed, having only holes for the laces. Some very dainty women’s and children’s shoes still had thick nailed soles.” 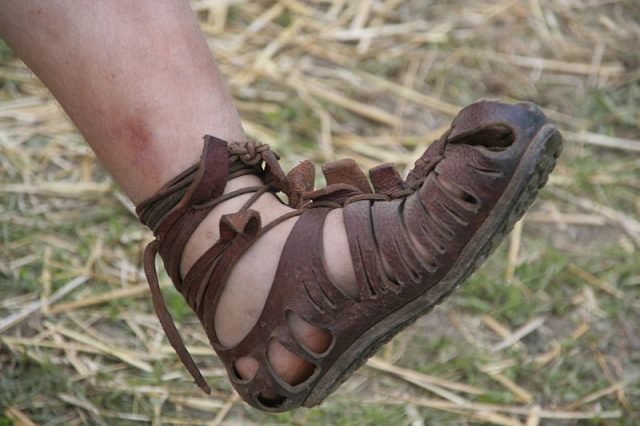 Pioneers in their own right, Roman shoemakers were known as sutors and their craft was highly praised throughout ancient Europe and beyond. The style obviously traveled together with conquest, as this example was discovered in the very outskirts of the Empire.

In an age of manufacture, a gifted sutor could easily earn the respect of Roman patricians ― the ruling elite ―enabling them to rise in the social hierarchy. 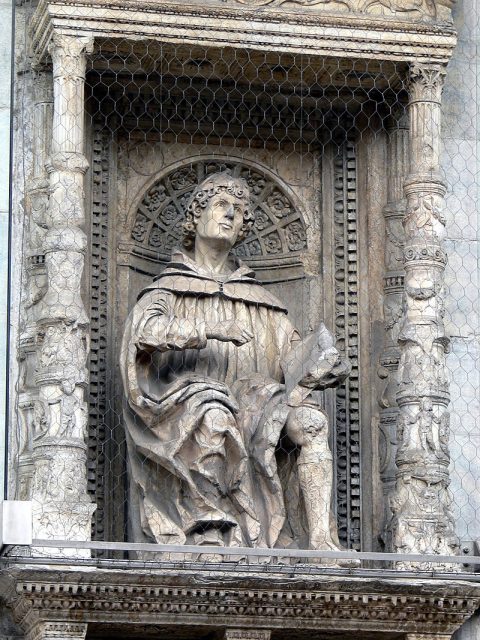 Statue of Pliny the Elder on the facade of Cathedral of S. Maria Maggiore in Como. Photo by Wolfgang Sauber CC BY-SA 3.0

Apparently, their meddling with other trades gave birth to an ancient Roman expression, attributed to Pliny the Elder ― “Sutor, ne ultra crepidam,” meaning “Shoemaker, not beyond the shoe.”

The expression originated from an anecdote in which a shoemaker complains to the painter, Apelles of Kos, by pointing out that his rendition of a shoe on one of his paintings wasn’t correct. Apelles changed this detail, but in return received a number of other objections by the shoemaker, concerning things that weren’t in his area of expertise. 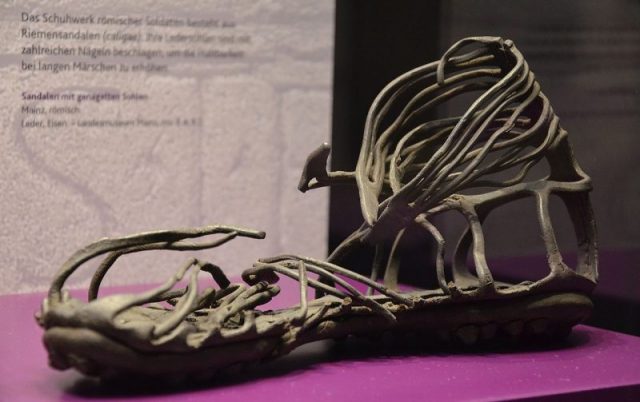 Thus came the saying by which everyone should stick to what they know, and remain restrained in passing judgment beyond their profession.

Read another story from us: Treasure – Roman Gold Ring Found with a Metal Detector in an English Field

On the other hand, when it came to shoes, the Roman sutors clearly were masters of their trade, as confirmed with this lovely piece of footwear which stood the test of time for almost two millennia, to be discovered and admired today.