Aftermath: France Under the Third Reich

“I cannot bear to be far from those who are hungry,” wrote Antoine de Saint-Exupéry in 1940, a few years before he coined his masterpiece The Little Prince, the charming children’s book that he dedicated it to his favorite grown up, Leon Werth, “the best friend” he had in the world.

France declared war on Germany on September 3, 1939, shortly after their hostile neighbor invaded Poland. They were among the first alongside Great Britain to stand up to the menacing Nazi regime. Yet, without any significant battles, by June 1940 the northern part of the country including Paris was already under Nazi occupation. 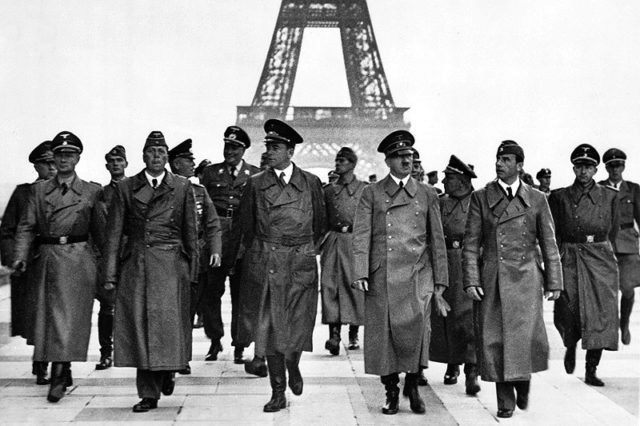 Some wrongful decision making and series of tactics poorly administered made the country vulnerable and open to conquest. Traitors from within allowed for a swift defeat.

The Nazi troops marched into France without a fight, and their abrupt advance led to one of the most extensive mass migrations ever recorded. To escape the Wehrmacht, 8 million souls in a desperate quest for survival were forced to leave their homes and flee south to safety. 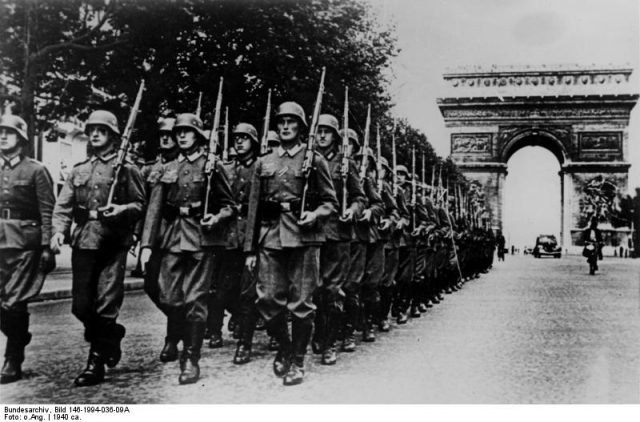 One of them was Leon Werth, a renowned novelist, acclaimed journalist and a Frenchman of Jewish descent who, at the time when de Saint-Exupéry dedicated a book in his honor, was hungry, cold and in dire need of comfort.

Millions were as a matter of fact.

On June 22, 1940, France signed an armistice with Hitler’s Germany, and First World War hero Marshal Henri Philippe Pétain was appointed as the new Head of State After the deal struck between the two parties and according to the terms of the surrender, France was literally cut in half. 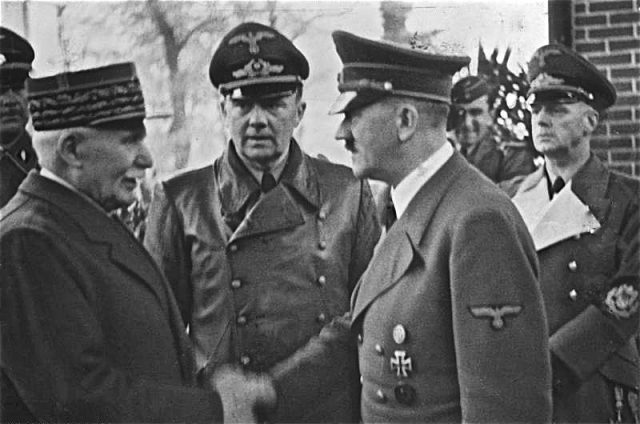 While the Germans remained and governed the north, Pétain was in charge of Vichy France, the alleged “free zone” that stretched through the southern two-fifths of the country.

France saw a savior in him, believing that by signing the treaty he had spared the nation from further bloodshed and found a nonviolent way out of a difficult situation. A lot of Frenchmen lost their lives in the clashes with the German Army during the First World War, and their sons were not in the mood to fight this time around. And he? He understood, declaring “France is a wounded child. I hold her in my arms.” 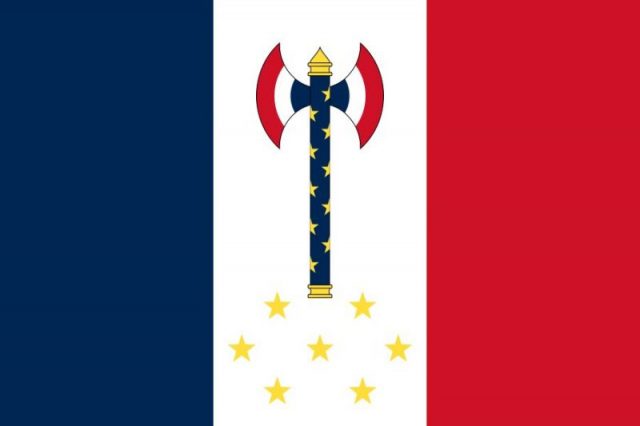 His embrace was not warm though, nor as protective as Frenchmen expected it would be.

Within a month — right after die-hard socialist and previous Prime Minister of the French Republic Pierre Laval joined in — the newly formed National Assembly was persuaded by Laval to grant Pétain full legislative and executive powers. A new constitution was promulgated that paved the way for an authoritarian regime in France.

Under the disguise of “National Regeneration,” liberté, égalité, fraternité (liberty, equality, fraternity), the three values by which the republic was founded upon were replaced with travail, famille, patrie (work, family, fatherland). Men were soldiers and a workforce. Women child bearers above anything else. Those souls who fled from the north to the southern “free zone”? They found themselves trapped in hell instead of the safe haven they were expecting. 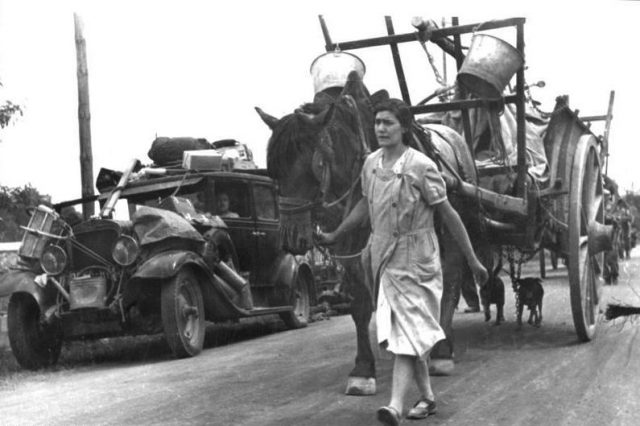 Pétain’s government was seen as a puppet of the Third Reich. The Vichy regime forbade almost every enjoyed personal freedom there was. He restructured the economy and every aspect of living to the extent that nearly everything anyone was doing was under tight supervision.

It started off with the Jews and strictly employed antisemitic propaganda. Synagogues were required to hand over lists of their congregation to the state, who were in quick succession deprived of everything. 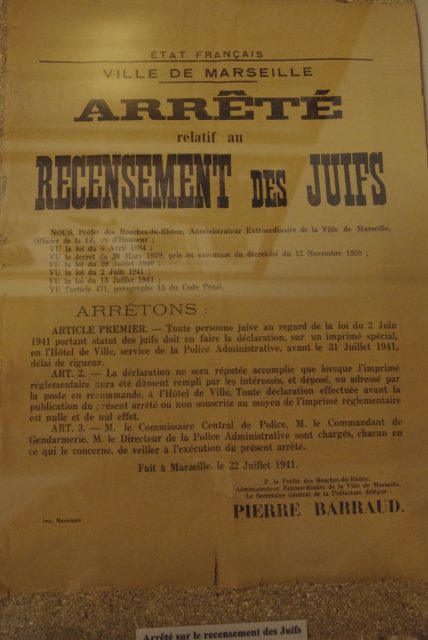 1941 poster from Marseilles, France, announcing the order for Jews to register. Photo by Olevy CC BY-SA 3.0

Their freedom of movement was limited and their savings confiscated by the authorities. Tens of thousands of apartments were taken from the French by the French and stood vacant across the state, while even more shops and business run by Jews closed for good.

All Jews were first fired from their public posts then banned from using them altogether, or any other privately owned shop for that matter including a food store. Finally, by March 1942, all those tracked down were captured, detained and — in collaboration with the Germans — sent to the concentration camps. 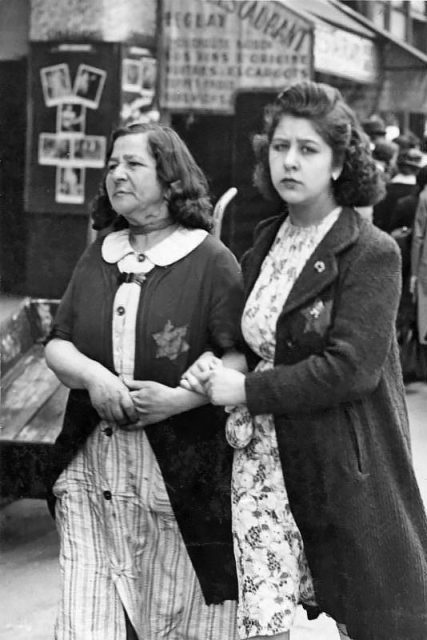 Approximately 75,000 Jews were either deported from France to Germany or sent to camps in their own country built by their own government. And it wasn’t only the Jews who suffered under the Vichy regime.

Anyone that stood in the way of what was going on or was deemed fit enough to be labeled as such for any other “wrongdoing” was declared an enemy of the state and prosecuted for imprisonment or execution. 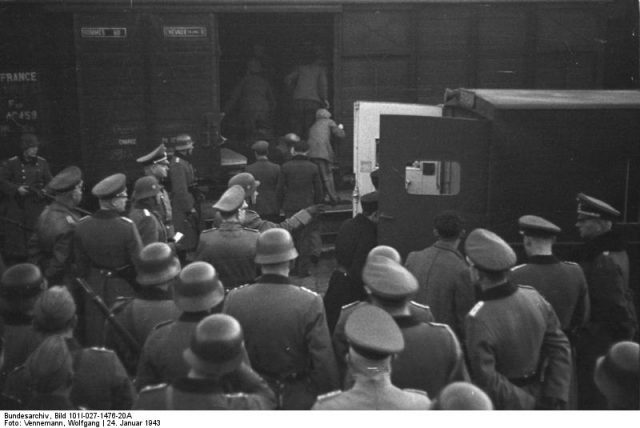 Every soldier, doctor, reporter and every other artist, scholar, teacher, or freethinker. For as Dame Jean Iris Murdoch later wrote, “a good society contains many different artists doing many different things, a bad one coerces artists because it knows that they can reveal all kinds of truths.”

And the truth some wished to conceal was utterly horrifying. According to some official reports, only 2,500 of the 75,000 people sent to the camps survived.

Crimes of the worst kind were carried out against Frenchmen, by Frenchmen. And the ones on the receiving end who survived the horrors never forgot. Nor did they forgive those who orchestrated them, or collaborated somehow in this treachery.

The Allies invaded Normandy in June 1944, and by August 19th the majority of France’s occupied territory was freed. Six days later, on August 25th, the last remaining German troops in the capital surrendered. By September Paris was liberated, a new government led by General Charles de Gaulle nullified Pétain’s French State and ended his regime, along with its inhumane laws. 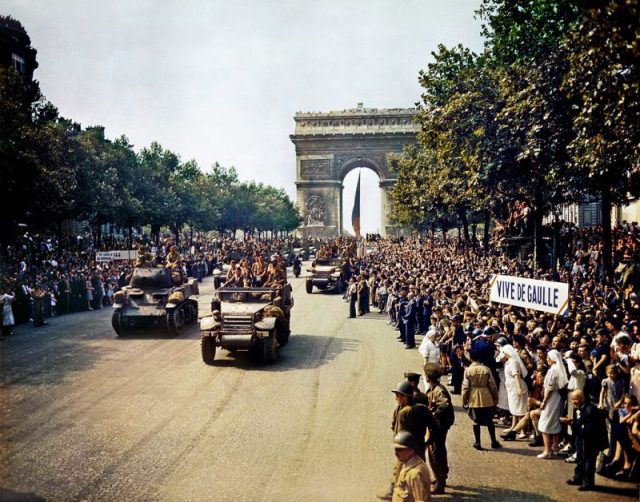 Crowds of French patriots line the Champs Elysees to view Free French tanks and half tracks of General Leclerc’s 2nd Armored Division passing through the Arc du Triomphe, after Paris was liberated on August 26, 1944. Among the crowd can be seen banners in support of Charles de Gaulle.

The French Resistance that had formed over the course of the two dreadful years began a relentless pursuit of traitors, conducting executions of everyone who had ties to the Nazi regime. It was the first of what many historians label as three phases of the “Nazi Hunt.”

It came to be remembered as the “wild phase,” and for a good reason. Suspects and known collaborators were convicted without a trial and many of them, humiliated and tortured, were executed publicly without any remorse. Around 6,000 of them according to some unofficial reports. 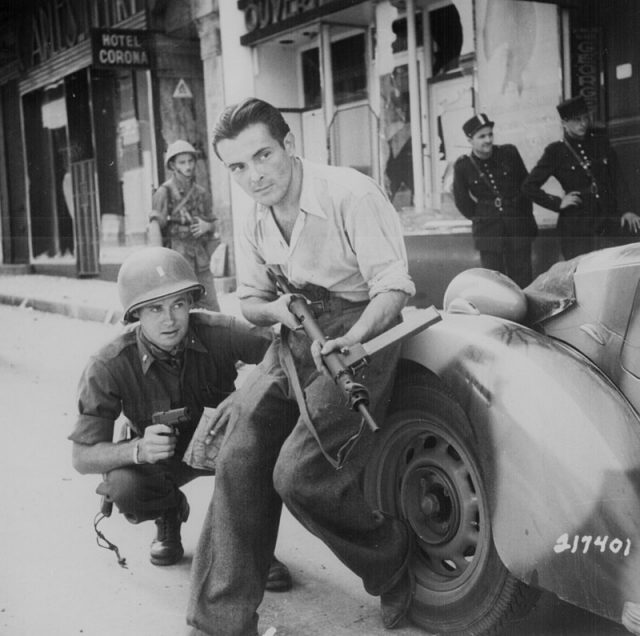 Resistance fighter during street fighting in 1944.

Women who housed or had romantic relations with German soldiers (most of whom probably did so to survive) were shaved publicly and after enduring the humiliation of a public head-shaving, often would be paraded shamefully through the streets for everyone to see. Some of them were killed, just like any other traitor was.

Soon afterwards marked the beginning of the second phase, labeled as the legal purge. Charles de Gaulle, head of the Provisional Government of the French Republic after the liberation, banned unauthorized execution and set in motion legal pursuits of known or suspected collaborators. Very briefly, 120,000 people found themselves behind bars, imprisoned for their crimes against the nation, its people, and most of all against humanity. 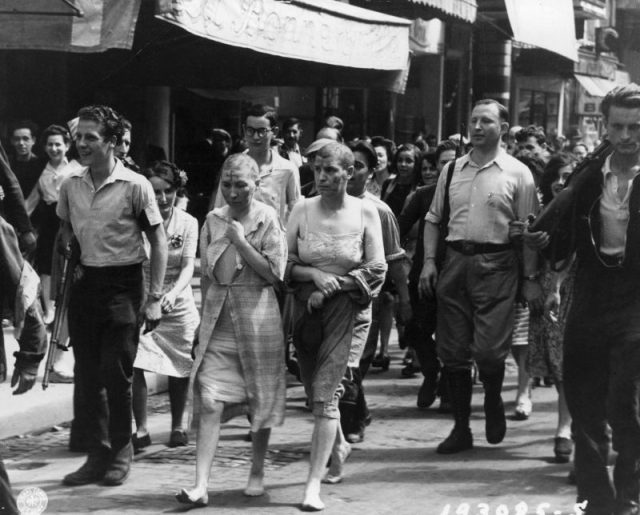 August 27, 1944: Two women, partially stripped, their heads shaved and with swastikas painted on their faces, are marched barefoot down the streets of Paris to shame and humiliate them for collaborating with the Germans during the Second World War. Photo by Three Lions/Getty Images

The third phase began in 1945 when Philippe Pétain and Pierre Laval were tried for high treason and sentenced to death. While Laval was executed after his trial, Pétain was not. Despite Paul Reynaud who served briefly as prime minister before Pétain telling the court that “never has one man done so much damage to a nation as Maréchal Pétain has done to the French,” instead of execution by firing squad, his death sentence was commuted to life in prison. Pétain was exiled to l’Isle d’Yeu where he died in 1951.

In the following years until 1951, 6,762 high ranking officials were brought to justice and sentenced to death by the official French courts, but only 791 of them were actually executed. Many who fled never to be found again were tried in absence, and some who were found, subjected to the National Degradation punishment laws, were given a lesser punishment later on. 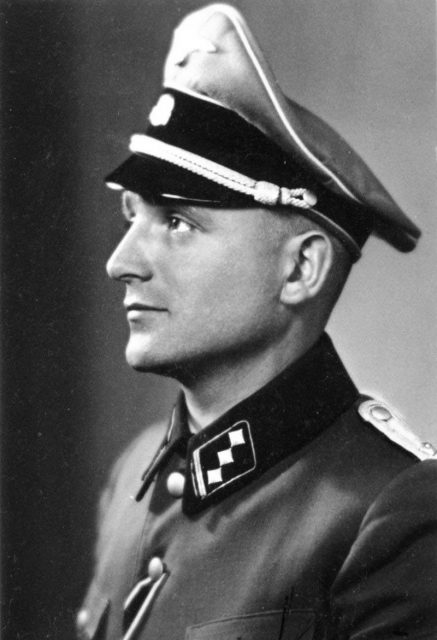 Many Nazi-hunting groups formed solely to collect information, track down suspected former collaborators and bring them to justice never gave up. The husband-and-wife duo Beate and Serge Klarsfeld for instance, were ultimately responsible for the arrest and sentencing of many war criminals, including Maurice Papon, Jean Leguay, Paul Touvier, and Klaus Barbie, also known and feared as the Butcher of Lyon.

Read another story from us: Operation Dragoon – the Liberation of Southern France, Spearheaded by the Free French Armed Forces

It took a while for France to admit its part in the crimes and that it was not just Germany at fault. In 1995, the year he became president, Jacques Chirac stated for the first time that “France, home of the Enlightenment and the Rights of Man . . . broke her word and delivered the people she was protecting to their executioners,” adding “the French government had given support to the criminal madness of the occupiers.”

Martin Chalakoski is a freelance writer drawn to history and fascinated by oddities. He has contributed to Abandoned Spaces and is steadily contributing to The Vintage News.

« Sea Serpent – Can the Giant Oarfish Predict Earthquakes?
Rage Against the Machines: The Beginnings of the Anti-Industrial Movement »