The year was 67 AD. The Olympic Games were in full swing. The amphitheater was packed with thousands of breathless fans who gazed on as the chariot racers took the starting line.

Among them stood a foreigner who loved the heroes of the Greek Culture so much, he was determined to share in their glory and admiration. In defiance of the Olympic regulations, he stood behind his 10 horse chariot, while his opponents manned only four steeds.

The Olympic officials were enraged at the defiance, but they dared not question him. He was Nero Claudius Caesar Augustus Germanicus, and he was the emperor of Rome. 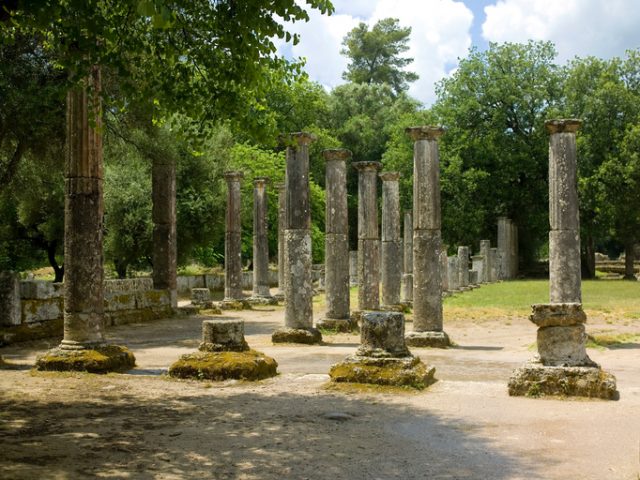 The race began. The charioteers burst from the starting line. As they rounded the first corner, the slightly overweight Nero found his ten horse vehicle too bulky to maneuver. He was thrown from the chariot and injured so badly, he almost died. But that would come later.

Nero had no business competing in the Olympics. He was no athlete. And while he loved and admired the romance and the valor of the Greek heroes, his love would prove no match for his insatiable vanity. 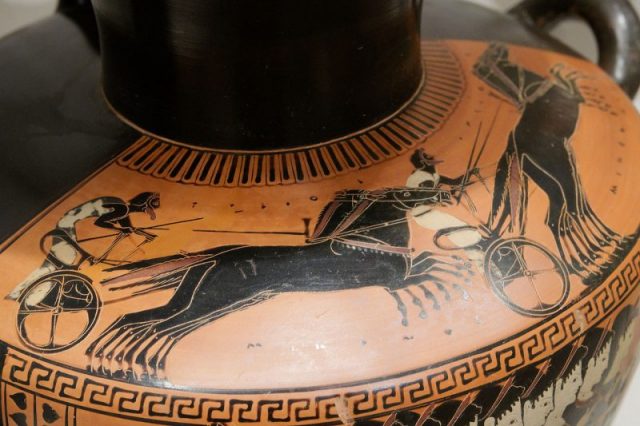 According to the Encyclopedia Britannica, Nero was born Lucius Domitius Ahenobarbus on December 15, 37 AD, in Antium, Latium. Though not of Greek origin, he was captivated by the Greek culture from the time he was a boy.

He spoke fluent Greek and considered himself a great poet and performer. As a young kithara singer, he began performing for his close friends. While he loved the applause of being an artist, for years he had watched the Olympic contenders and dreamed of becoming one himself. 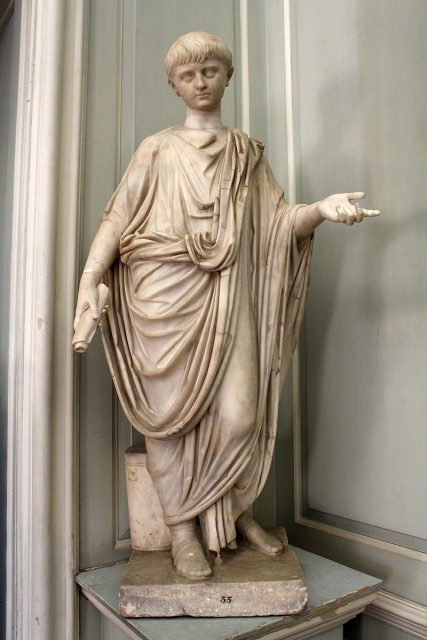 Statue of Nero as a boy. Photo by Prioryman CC BY-SA 4.0

Lacking in athletic capability, Nero’s opportunity to compete in the Olympics would come as a result of his political power, not his talent. He started by establishing the first Greek games in Rome. Calling the games “Neronia,” he required that the victors dedicate their victory crowns to the emperor.

Next, since Nero was a poet and a singer, not a trained athlete, he would need to change the nature of the games to accommodate his own talents and tastes. So he introduced competitions which involved acting and singing, lyre-playing and trumpeting. 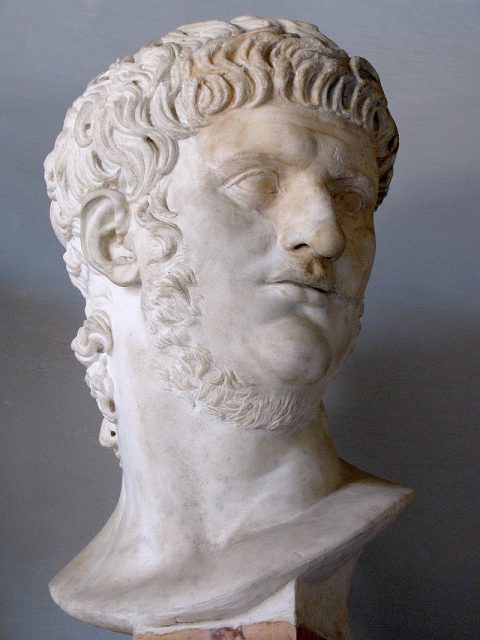 He also bribed his way into the Olympic Games. No doubt, his influence as the emperor (an office he held from 54 to 67) might have helped him as well. But it was also the bore of political life that made Nero seek the applause and admiration he desired through becoming an Olympic competitor.

His first participation was in 64 AD in the Naples Sebasta. In 65, he performed as a poet and kithara singer during the second Neroneia. Finally, he appeared as a ten horse charioteer in the Circus Maximus.

Each appearance and many of his victories came as a result of him using his wealth and political power to literally change the rules of the game. 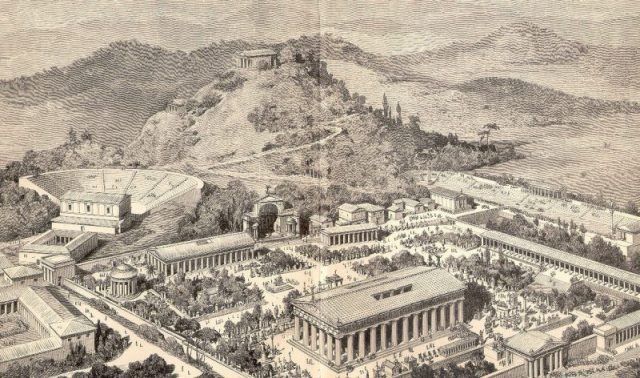 An artist’s impression of ancient Olympia.

But that was not the worst of his offenses against the games. Nero also forced the Olympics to be held in 67, during his final tour of Greece. This way, he could participate in the games as part of his grandstanding abroad.

His vanity also caused him to disregard the opponents who had fairly defeated him in the chariot race. Instead, he proclaimed himself the winner, claiming that he “would have won,” if it were not for his accident. 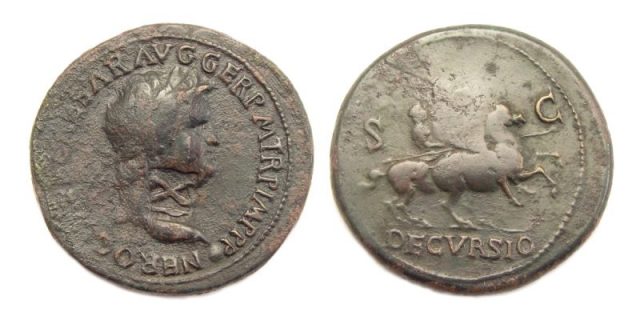 All of this was a great offense to the Romans, who considered the Olympic Games sacred ceremonies full of spiritual and religious significance. In his quest for victory and admiration, Nero had trampled these traditions. But his victory would be short-lived.

Nero’s self-indulgent tour through Greece was cut short when his advisors warned of a plot against his life which was unfolding. The Roman elite despised Nero’s finagling with the ceremonies and they disapproved of his very appearance in the games.

Weary of Nero’s indulgences, many of them had plotted to kill him upon his return. Forced to enter his own city in disguise, Nero soon found himself in a perilous situation. 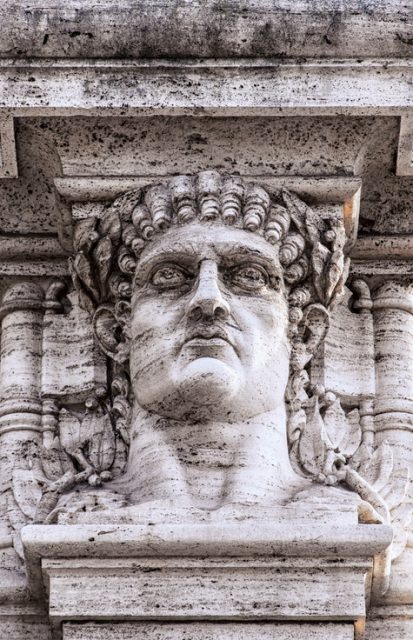 A statue relief of emperor Nero’s head on the gateway entrance to the park that contains the ruins of his golden palace at Domus Aurea in Rome.

Would he risk the pain and humiliation of a public execution at the hands of the people who had grown to hate him? In the end, he chose death as a way out. He delegated the “task” to a trusted advisor, who agreed to quietly slit his throat and call it a “suicide.”

“What an artist dies in me!” Nero grieved, as the advisor raised the knife. Shortly after, Nero’s name was removed from the list of Olympic champions.

Thus passed the man who admired the valor of the Greek heroes, but who clung to his own vanity until the end.

« Legendary Gangster Al Capone was one of the First Recipients of Penicillin in History
Back to the Future – The First Time Machine was a Refrigerator, not a Delorean »