“Hunger Stone” Warnings – Haunting Messages From the Past Uncovered by Drought

As Europe faces one of its harshest summers in years, droughts threaten agricultural productivity. Traditionally, the area of Central Europe, which includes parts of Germany, Czech Republic, Slovakia, Austria, and Hungary relied on its fertile ground for food production.

Throughout history, droughts have been the main culprit for famine in the region, and as such have been well-documented by various sources.

Although books from various periods serve as a testimony of drought-induced devastation, some landmarks provide us a much deeper and emotional insight into the horrors of everyday life plagued by famine and economic crisis. 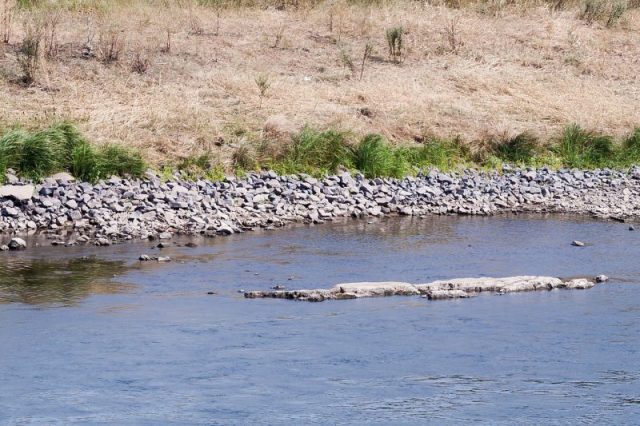 These landmarks are placed as boulders in riverbanks with inscriptions that refer to historical droughts when water levels were at a record low.

Once the river’s water level drops below that point, the eerie boulders reappear, reminding the local population of a harsh period in the past.

These particular boulders are known as “Hunger Stones” and they are typical for the area in around the town of Děčín in the northern part of the Czech Republic. 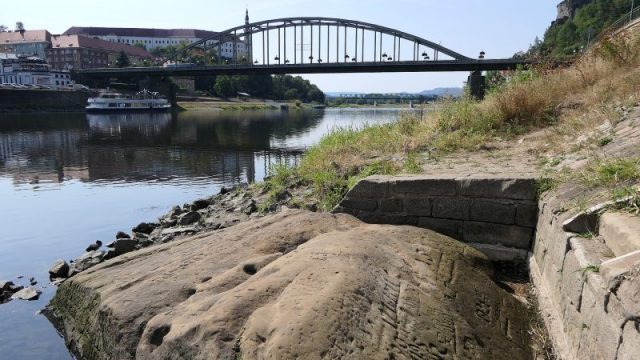 The town is near the German border and has traditionally been inhabited by Germans, so it comes as no surprise that the inscriptions on these famine memorials are written in German.

As of summer 2018, more than a dozen hunger stones had appeared along the Elbe river due to the prolonged drought, delivering sinister messages.

The hunger stone at the left bank of the River Elbe at Decın-Podmokly. Photo by (Br´azdil and Kotyza, 1995) ResearchGate CC BY SA 3.0

Another one, going back as early as 1417 warns the future viewer of the horrors caused by low water level:

“If you will again see this stone, so you will weep, so shallow the water was in the year 1417.” 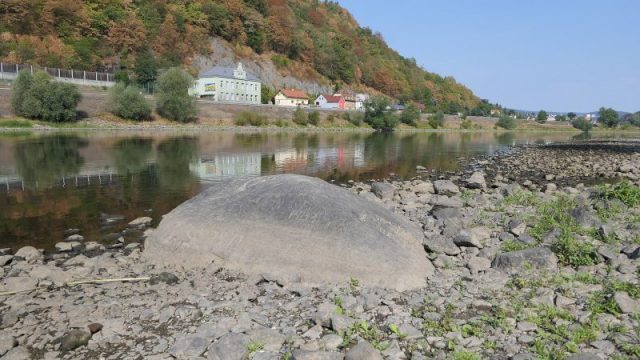 The relation between the retreating river and tears seems to be a common trait of all hunger stones, for other inscriptions include weeping and crying as well as an apocalyptic undertone:

Even though droughts are still capable of disrupting the economy, the periods in which these inscriptions were made were far more vulnerable to such natural disasters. 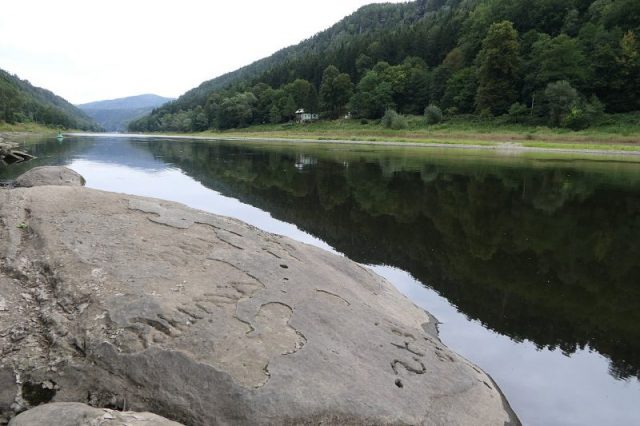 The town of Děčín, in particular, relied on the Elbe river as its lifeline ― not only did the drought affect the crops, it also made river transport impossible, as boats couldn’t sail in such shallow waters. 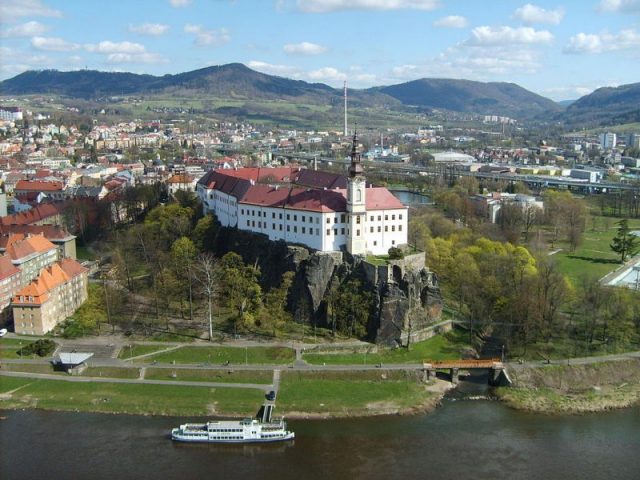 Such interruption of traffic affected a lot of people, for trade would come to a halt. This further caused famine and other economy-related issues.

Thus the town would be deemed to a slow and painful decay until nature decided to relieve it with rain. There are dozens of such stones, and according to the town’s archives there might be one dating back to the year 1115, but its exact location remains unknown. 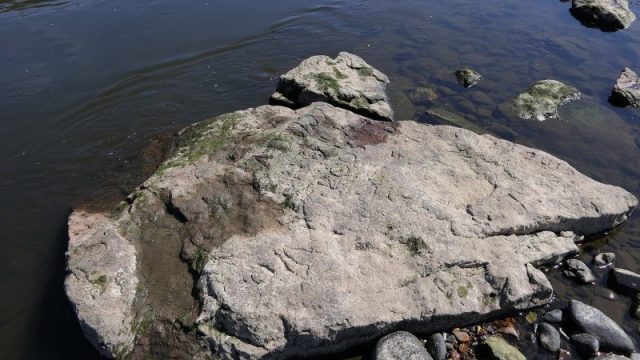 However, these stones lack the sinister messages of their medieval predecessors. It goes to show how the river lost its importance among the people who once completely relied on its unpredictable nature in order to survive. 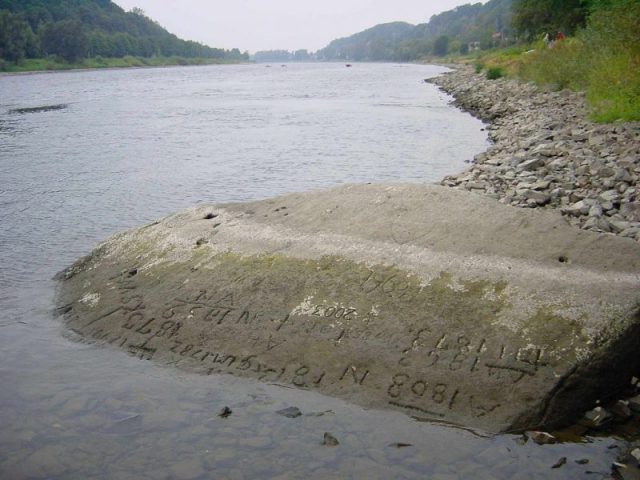 As technology progressed, the boulders became nothing more than landmarks which honor the tradition, but once they were the bearers of bad news and reminders of hardships endured during droughts.

Some of them hold the initials of their makers, adding a personal note to the suffering caused by low water levels. 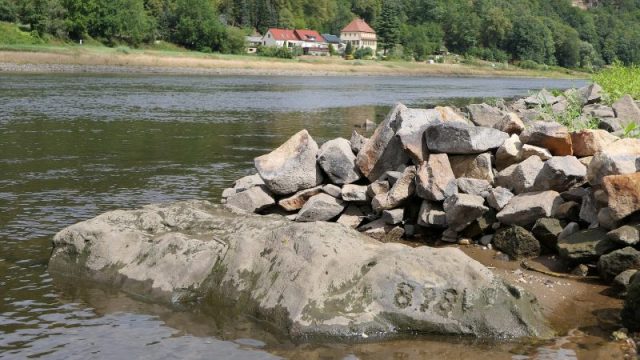 As the Elbe river hits a record low, hunger stones just keep appearing along its bank. But that isn’t the only thing reappearing. Relics of WWII have also come back from the past, to remind the locals of yet another hardship, which was caused by man instead of nature. 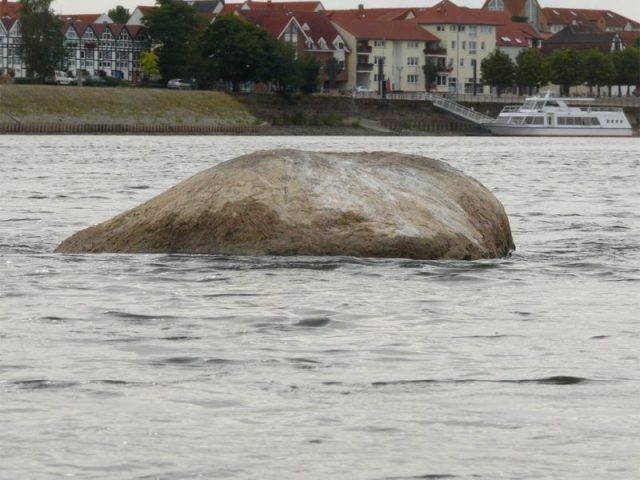 Hunger stone in Schönebeck. Photo by Radionaut CC BY SA 3.0

Unexploded bombs and hand grenades, as well as other artifacts, can be seen along the riverbank, laying rusted and embedded in the sand. 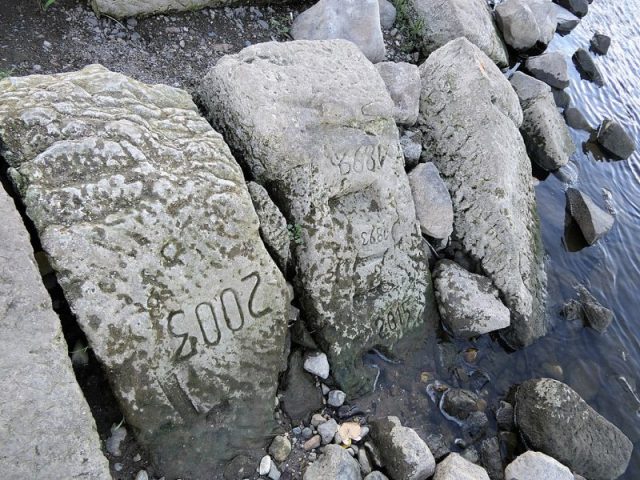 As the inscriptions on the boulders induce a rather unpleasant feeling with their sad warnings belonging to times long passed, someone decided to put in a dose of optimism. So, an unknown author recently made an inscription on one of the boulders that read:

Read another  story from us: Vikings in Minnesota? The Mystery of the Kensington Runestone

So the next time the Elbe river hits rock bottom, at least it won’t feel like the world’s ending.