All of us have farts that bubble through our system in what polite science calls “breaking wind” or “flatulence.”

Yet we look accusingly at other people when we drop one in an elevator, despite the fact we are contributing to global warming alongside the cattle that give us methane in a final act of defiance. However pretending we are innocent of farts seems a recent custom when we look at literature down the ages.

William Shakespeare was unusually polite when he wrote in The Comedy of Errors, “A man may break a word with you, sir, and words are but wind. Ay, and break it in your face, so he break it not behind.”

The Japanese He-gassen art scroll has been digitized by the Waseda University Library.

However our own Lyndon Johnson was somewhat more direct when he said, “Jerry Ford is so dumb he can’t fart and chew gum at the same time’” and so brought the subject out in the open. Although whether he dropped one in the Oval Office is, of course, Top Secret.

Rumors abound of military recruits lighting farts on troop trains where this may be socially responsible. This however fades into insignificance when we investigate the fart battles that took place in Japan’s Edo Period. 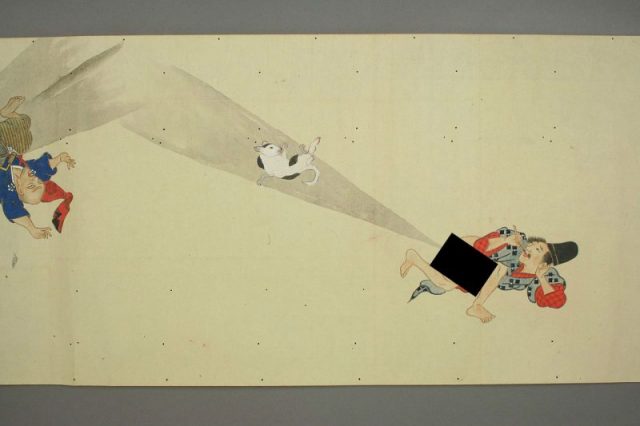 He-gassen scroll segment 33. A fart master propels a rat into the stratosphere.

Relative peace and stability prevailed between 1603 to 1868. This was a hedonistic, pleasure-seeking era when sophisticates patronized poetry and theater, while red-blooded males sought the pleasures of geisha girls in red light districts.

It was said the powerful gusts of human wind could break through wooden boards and traverse wide battlefields through the sophistication of Japanese fart technology.

Fart wars were also used by artists to show disdain for the increasing European influence in Japan, with depictions of Westerners being blown home on an unpleasant ‘wind.’

Students at Cornell University wearing facemasks decided to quantify fart velocity in 2009. They developed a fart intensity detector able to rank broken wind on a scale of 0 to 9 in terms of sound, temperature, and gas concentrations.

They discovered the most dangerous farts contained hydrogen sulfide, and the gases moved faster when the temperature was warmer. 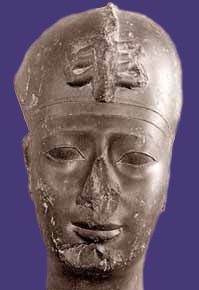 As a matter of passing interest, hydrogen sulfide-producing foods include eggs, meat, fish, beer, beans, broccoli, cauliflower and cabbage, in case you are planning to enter a farting competition. Although leafy green vegetables may counter this, if true-blue carnivores can stomach the fact. 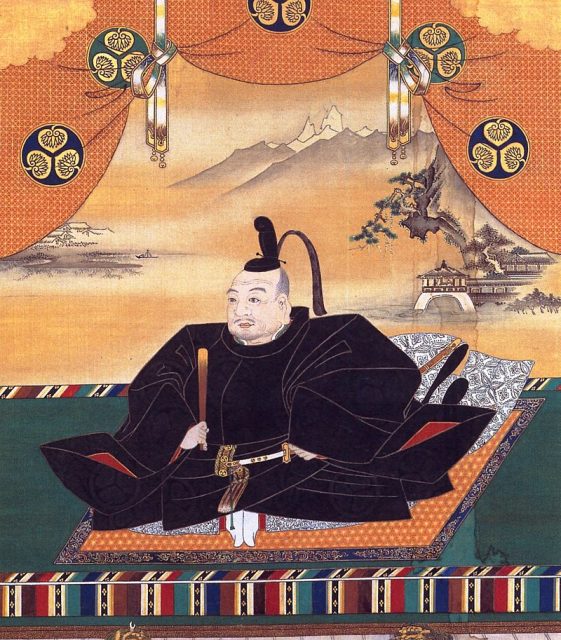 Getting back to fart battles, Japanese historians from the Edo Period called them He-Gassen — as in hello, gas alert, presumably. An unknown artist showed a fart master propelling a cat into the stratosphere that could have NASA wanting to know more. However, were the Edo Period fart battles real, or were they the outpourings of a vivid imagination?

Well, for starters would a library with 4.5 million volumes and 46,000 serials risk its reputation by displaying digitized versions of the farting scrolls if this was pure baloney? Waseda University was founded in 1882, fourteen years after the closing of the Edo Period, and should have been in a perfect position to verify the scrolls. 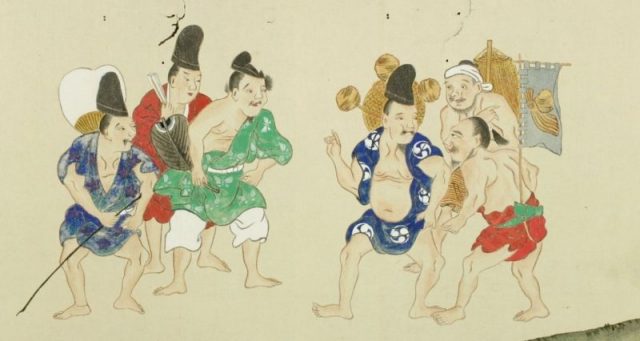 The scroll may have been painted as a satirical take on political events of the era.

Moreover, using farts to gain military advantage is a much older tradition. No less than Google Books curates the story of the fart that launched a war that killed 10,000 souls according the historian Herodotus. Herodotus goes by the name “The Father of History” since was the first to look for critical evidence to sift truth from legends.

He writes of Egyptian King Apries facing a military revolt in 570 BC, that’s 2,588 years ago. He sent his sidekick Amasis to reason with them, however they suggested he assume the kingship instead. Apries sent Patarbemis to tell him to sort himself out. 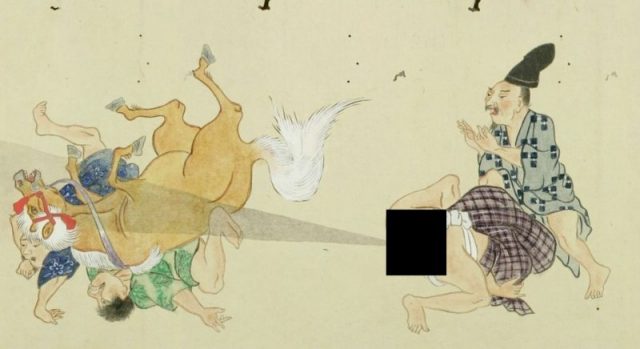 It was said the powerful gusts of human wind could break through wooden boards and traverse wide battlefields.

When he arrived, Amasis – who happened to be on horseback – “raised himself up in the saddle, farted, and told him to take that back to Apries.”

So there you have it. In a nutshell the He-Gassen fart battles existed because we have documentary proof in a famous library. Moreover, they were a marker on a timeline at least 2,588 years old.

The tradition lives on in school dorms around the world. How could you have ever doubted the truth?