Did Michael Rockefeller Meet His End at the Hands of a Native Tribe?

At the age of only 23, Michael Rockefeller, born to the New York State governor Nelson Rockefeller in one of the wealthiest families ever, had gone missing off the coast of then-Dutch New Guinea. The date was November 21, 1961.

The young man was conducting an anthropological expedition in this remote corner of the planet along with his mission companion René Wessing. 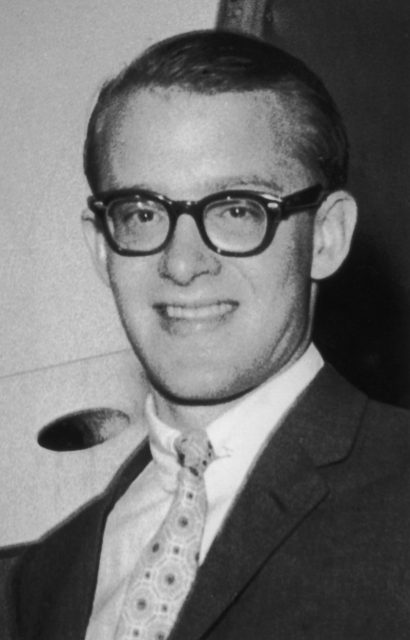 Michael Rockefeller (1938 – 1961?), who disappeared during an expedition to New Guinea in 1961. He was the youngest son of New York Governor Nelson A. Rockefeller. Photo by T. Nielsen/Keystone/Hulton Archive/Getty Images

The two men had an accident with their boat, which capsized some 12 miles from the coast.

Stranded in the sea, Michael told René he would swim to reach the coast. Even though his friend advised him not to do so, the 23-year-old tied gasoline cans on his belt and started swimming… towards his death. 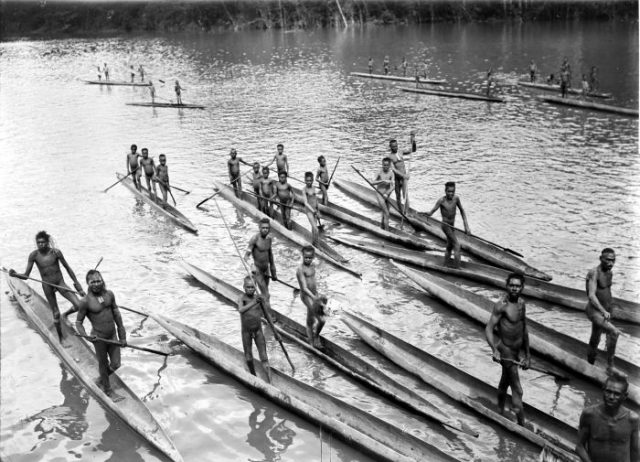 Asmat on the Lorentz River, photographed during the third South New Guinea expedition in 1912-13.

While Wessing was eventually saved, not a word was heard nor a hair was seen from Michael Rockefeller again. A thorough search mission to find him entailed both aircraft and ships.

No resources were spared as this concerned a member of the wealthy and politically powerful Rockefeller family. In the 1970s, Nelson Rockefeller went on to serve as the 41st Vice President of the United States. 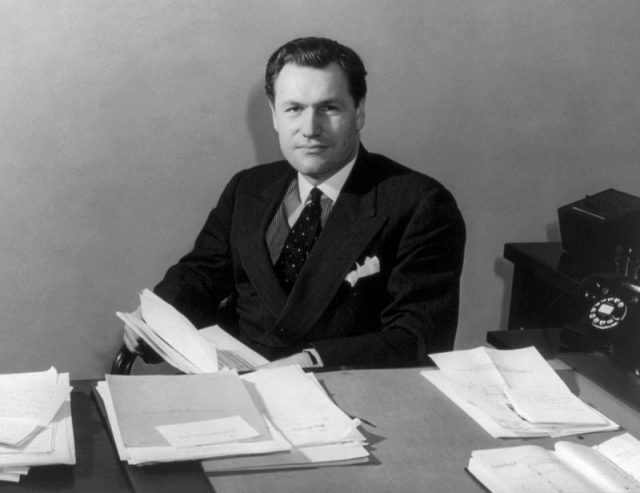 The strange disappearance filled the news, and various stories popped up explaining what had happened. Did a shark eat Michael? Did he drown? Did he retreat from a life of fame and fortune, finding refuge among the woods and tribesmen of New Guinea?

Nelson and his wife came to the remote island country in person to support the hunt for their son, but almost ten days had passed and, as the Dutch interior minister himself stated, “There is no longer any hope of finding Michael Rockefeller alive.” 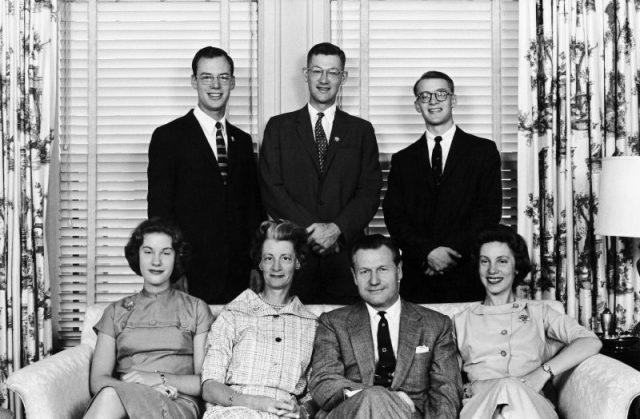 The Rockefeller Family. From left to right: Nelson A., Ann. Standing, Steven, Rodman and Michael on November 18, 1958. Photo by Keystone-France/Gamma-Keystone via Getty Images

According to the 2014 book penned by National Geographic’s Carl Hoffman, entitled Savage Harvest: A Tale of Cannibals, Colonialism and Michael Rockefeller’s Tragic Quest for Primitive Art, the statement that Michael Rockefeller was no longer to be found alive sounded about right.

Besides a Harvard degree in history and economics, Michael Rockefeller was not the kind of guy who would see clients and conduct meetings as part of his father’s business empire. Instead, he garnered a love for ancient cultures and art, which is why he came to New Guinea in October 1961 — to explore the indigenous Asmat people. 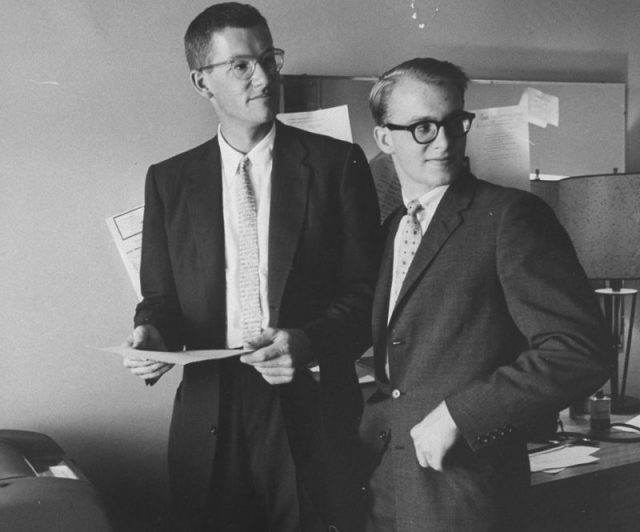 He had already collected a trove of artifacts from visiting different Asmat villages, which today can be seen in the Metropolitan Museum of Art. In November 1961, the young Rockefeller had returned for more adventures and more exploration. His thirst for new knowledge and experiences proved fatal, however.

According to Hoffman’s book, Dutch investigations at the time turned up evidence that Michael’s life was claimed by the Asmat people. 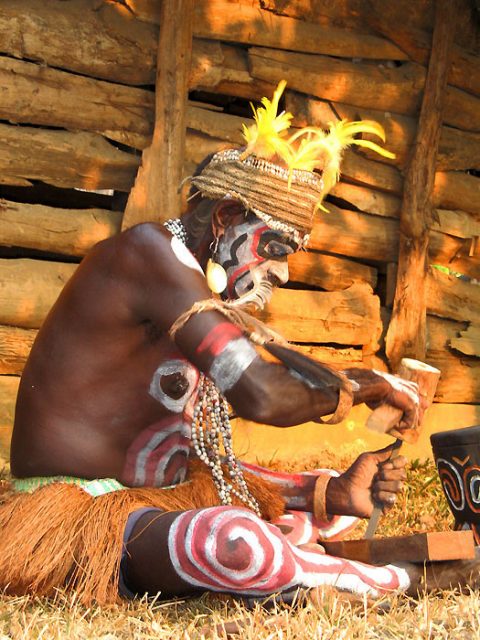 Namely, two Dutch missionaries who lived among the tribesmen and were able to understand the Asmat language pieced together a curious tale from conversations they overheard. The locals also wanted to keep the story a secret, in fears that the ‘white men’ might get angry and come for revenge.

Supposedly the missionaries shared the story with local authorities, but the report must have been classified and not followed up. The reasons to do so were political as by the early 1960s, the Dutch were fearful of entirely losing control over New Guinea as a territory.

For the purposes of the book and to verify these claims, Hoffman traveled to the island of New Guinea and visited the Asmat villages to investigate further. According to his book, Michael Rockefeller’s death was indeed a well-known story among the native people, who were reluctant to discuss it with an outsider.

If it was really true, then the young Rockefeller was killed and butchered in retribution. The case involves an earlier incident as of 1957 when different groups of Asmat tribes fought and killed dozens among each other.

The Dutch then engaged in an intervention to calm the two groups, and this resulted in another incident where several leaders of the Otsjanep people (one of the involved groups), were shot and killed. It would have been the first gunfire the locals ever saw, probably leaving them in deep shock. 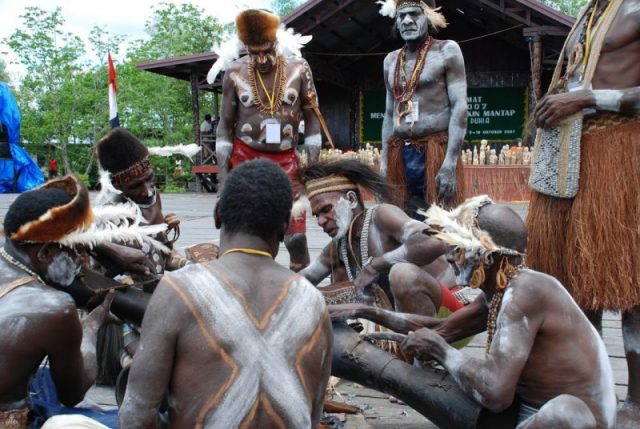 So, when the sons of those fallen leaders one day saw a white man swimming towards the coast of their home island, they decided to have their revenge. That man may have been Michael Rockefeller, and what happened next, though abhorrent, is entirely in place with the tribal customs and beliefs.

The Otsjanep would have quickly come to regret their deeds. The quest which followed after Michael Rockefeller had gone missing must have been a dreadful experience. Most of the Asmat didn’t know what an aircraft was. A subsequent outbreak of cholera in their villages was another dreadful event that many of them further perceived as a punishment for their killing.

If this story was really how Michael Rockefeller’s life came to an end, then one thing would be certain anyway. He would have been unfortunate to face such a death after swimming those miles in the sea. A great irony.

Read another story from us: The Spooky Unsolved Mystery of the Flannan Lighthouse Disappearances

As for Michael’s family, they accepted the only explanation for their son’s death was because he drowned. Drowning was also cited as the reason for his death when the official search for Michael’s body concluded in December 1961.