May 8, 1945, was a day of celebration for everyone in England, and, not surprisingly, among the hordes of joyful was Princess Elizabeth, the future Queen.

Her chosen form of celebrating England’s hard-won victory over Germany on that night has been the subject of articles, a documentary, and even a movie, called A Royal Night Out.

The Queen reflected on the special night in a BBC recording from 1985, which the palace released to mark the 70th anniversary of VE Day. 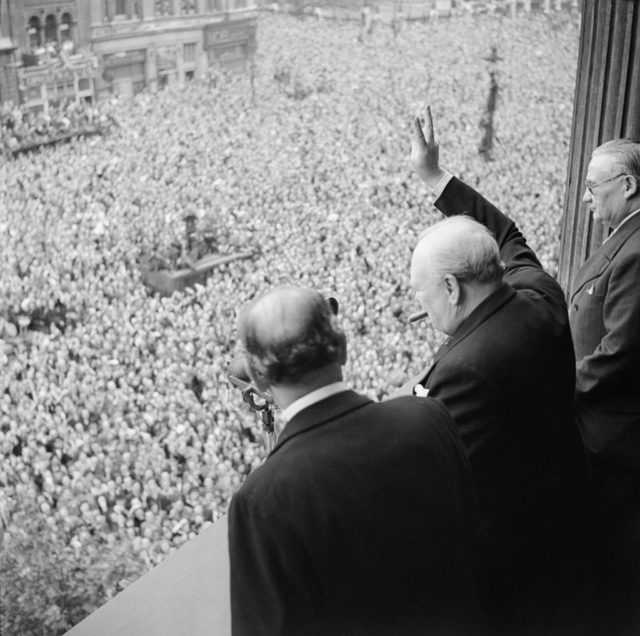 Winston Churchill In The Second World War, Churchill waves to crowds in Whitehall on the day he broadcast to the nation that the war with Germany had been won, 8 May 1945 (VE Day). (Photo Credit: Major Horton/ Imperial War Museums via Getty Images)

After waving to the crowds massed in front of the balcony at Buckingham Palace, Princess Elizabeth, 19, and her sister Princess Margaret, 15, went incognito to mix in with the crowds of London. Of course, two princesses don’t just sneak out the side door on their own.

After they finally persuaded their parents to let them go, a 16-strong group of trusted members of the royal household was put together to surround the two young women, including King George’s equerry, Peter Townsend, an RAF war hero who would later fall in love with Princess Margaret. 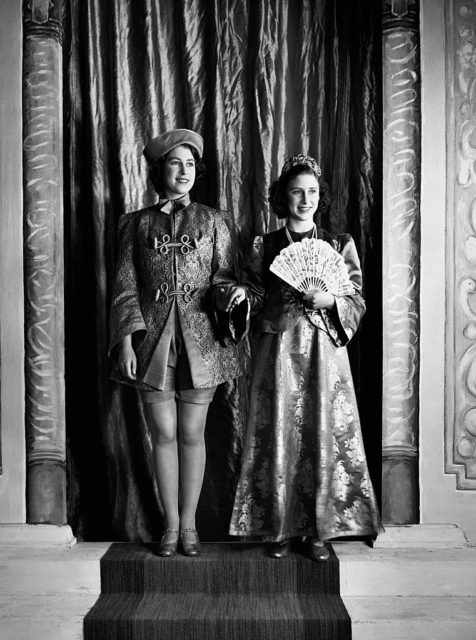 According to The Telegraph, the party “slipped out of the palace, Princess Elizabeth in the uniform of the Auxiliary Territorial Service, with whom she had served as a mechanic, and Princess Margaret in glamorous civvies.” 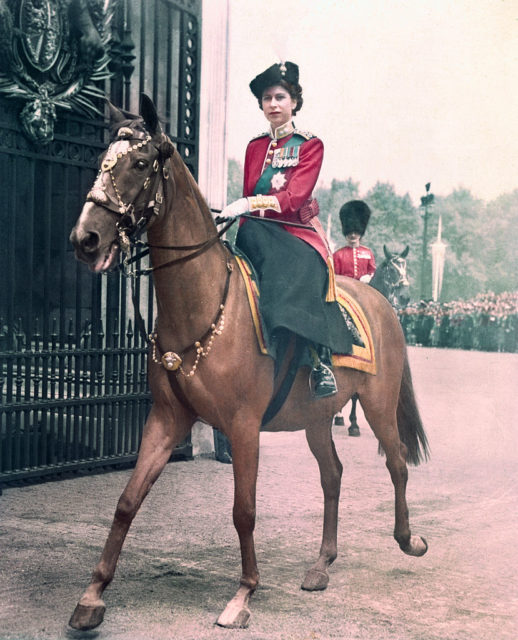 Princess Elizabeth of England represents the King at colorful trooping ceremony, photographed on her arrival back at the Palace ceremonies. (Photo Credit: Bettmann / Contributor)

Margaret Rhodes, the cousin of Queen Elizabeth, said, “We crossed the forecourt at Buckingham Palace and got to the railings and there were these masses and masses of people. There was a general thing of, ‘We want the King and Queen,’ which we all frantically joined in with and were amazed when, five or 10 minutes later, the windows opened and they came out onto the balcony. It was like a wonderful escape for the girls. I don’t think they’d ever been out among millions of people. It was just freedom – to be an ordinary person.” 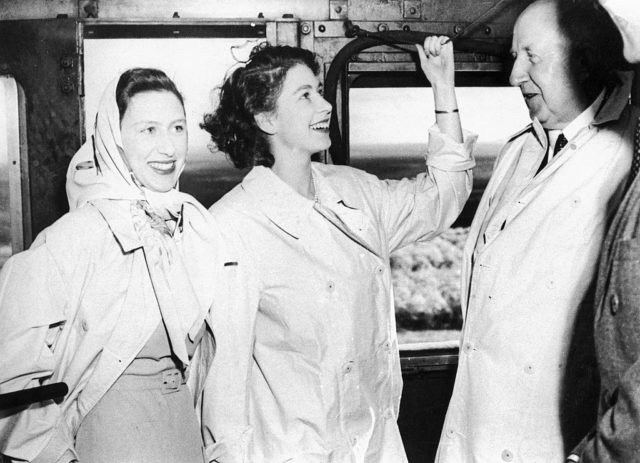 Princess Elizabeth sounds the whistle of a Beyer-Garratt locomotive watched by her sister, Princess Margaret and the South African Minister of Transport, F C Sturrock, during the Royal family’s tour of South Africa in 1947. (Photo Credit: SSPL/Getty Images)

The Queen told the BBC, “We were terrified of being recognized, so I pulled my uniform cap well down over my eyes. A Grenadier officer among our party of about 16 people said he refused to be seen in the company of another officer improperly dressed. So I had to put my cap on normally.” 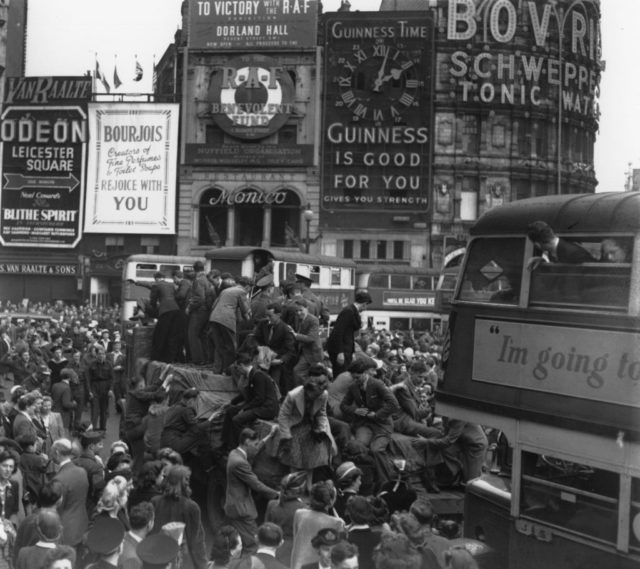 8th May 1945: Crowds clamber on trucks and buses during the VE Day celebrations in Piccadilly Circus. (Photo Credit: Keystone/Getty Images)

The Queen cherished her memory of seeing people linking arms and walking — “all of us just swept along on a tide of happiness and relief.”

Margaret Rhodes remembers Elizabeth and her companions doing the conga through the front door of the “stuffy and formal” Ritz. “We rather electrified the stuffy individuals inside. I don’t think people realized who was among the party – I think they thought it was just a group of drunk young people. I remember old ladies looking faintly shocked. As one congaed though, eyebrows were raised.” 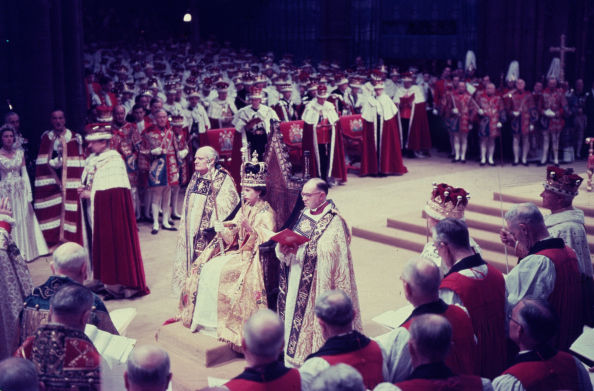 Not too long after midnight, the two princesses were back at the palace. The Queen has called it, “One of the most memorable nights of my life.”

In 2015, the film A Royal Night Out was released, starring Sarah Gadon, Bel Powley, Rupert Everett, and Emily Watson. In it, Princess Elizabeth slips away from the royal party and meets an airman absent without leave and Princess Margaret ends up in a nightclub. The filmmakers say it is a fictionalized account.

The Washington Post review said, “For the most part, the movie keeps things light with a jazzy brass score and a parade of fish-out-of-water scenarios… Most likely, the real Elizabeth never had such a memorable, action-packed evening. But it’s fun to imagine, if only for a moment, that behind the facade of stately hats and matching suits, the queen is hiding some wacky stories.”

The Trafalgar Square scene of A Royal Night Out was filmed on May 8, 2014, the 69th anniversary of VE night.