Julia Pastrana was billed as “the ugliest woman in the world,” “the bear woman,” “the link between mankind and the orangutan,” and “the ape woman.” She was born in 1834, in rural Mexico, in the state of Sinaloa, and was doomed from birth by her physical appearance to a life of dehumanization and denigration.

She grew to just 4 feet and 5 inches tall and, except for the palms of her hands and the soles of her feet, Pastrana’s body was covered with hair. She had a large nose and jaw, and abnormally thick lips and gums. Hence her nickname of the Ape Woman. 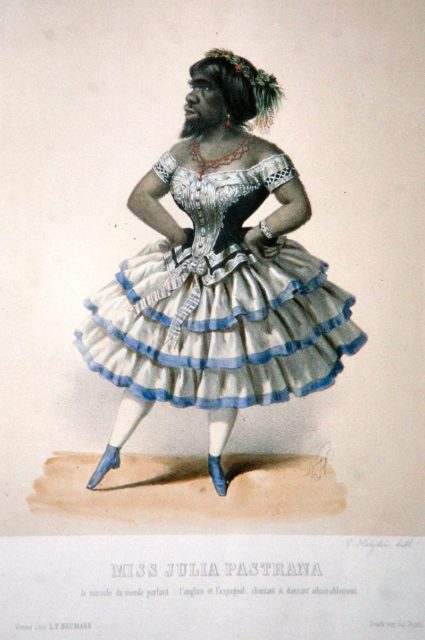 Even though she had a rare congenital condition known as acromegaloid hypertrichosis syndrome, in the 19th century, Pastrana sparked people’s curiosity and was exhibited for their entertainment all around the world, while Victorian pseudo-scientists claimed that she was a half-human, half-ape hybrid.

Despite her gentle character, her talents for singing and dancing, and her ability to speak multiple languages, nobody saw further than the hair all over her body. People didn’t see a human under her “fur.” 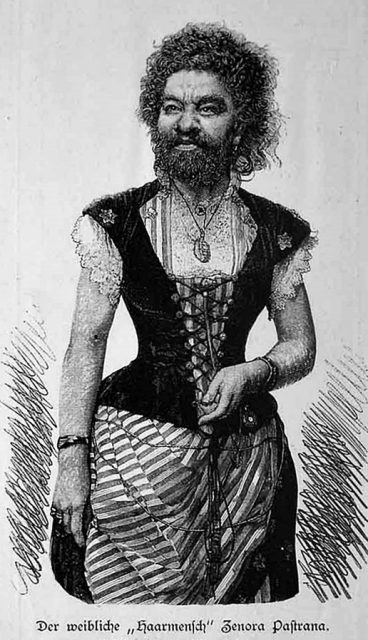 Until the age of 20, Pastrana worked as a maid and entertainer in the house of a Mexican state governor, who adopted her. Somehow, she got in touch with M. Rates, an American showman, and became a freak show star traveling around the U.S. and Europe.

Julia Pastrana was immensely popular. Not only among the audience who sought entertainment and amazement, but also among scientists and doctors who wished to study her. She was always advertised as half-animal, with many people degrading her as an orangutan. 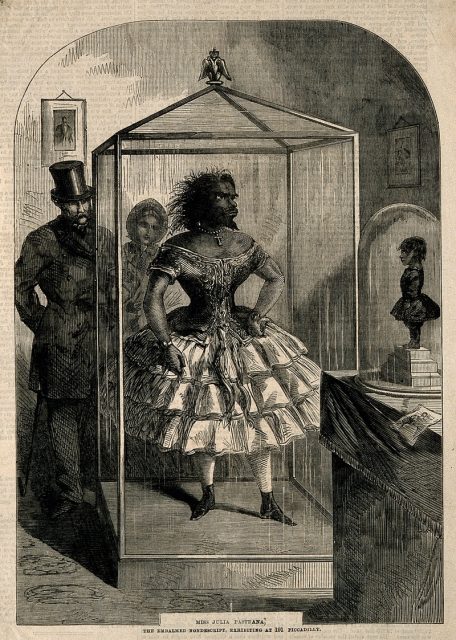 Julia was very nice and polite person who enjoyed all the traveling, cooking, and sewing.

She was also always willing to help the doctors puzzled by her appearance and submitted herself to medical tests. Pastrana was a curious person who managed to learn and speak three languages, including English.

Charles Darwin described her as “a remarkably fine woman,” albeit with “a thick masculine beard and a hairy forehead.” 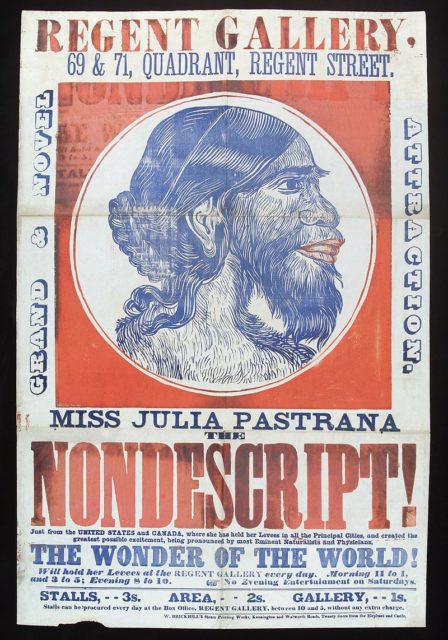 “Miss Julia Pastrana the Nondescript,” advertised for an exhibition of the famous Bearded Lady. Photo by Welcome Images CC BY 4.0

In the 1850s, Pastrana secretly married her manager, Theodore Lent. Many people believed that she was very fond of him, while Lent married her out of fear of losing his most famous star due to Pastrana’s popularity.

In one interview for the press, she declared to have turned down more than twenty marriage proposals because of the candidates’ low financial status. 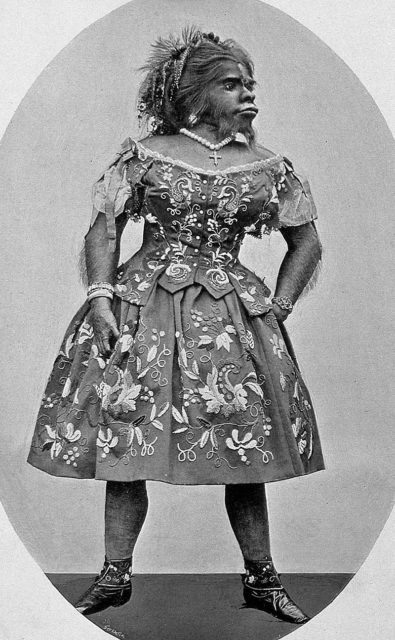 And yet she married, and probably loved, only Lent, the man who arguably degraded her more than anyone else. In 1860, after giving a birth to a baby boy, Julia and her son both died. Julia’s last words on her deathbed were: “I die happy. I know I have been loved for myself.”

Unfortunately, she was dehumanized in death as she was in life. Lent sold the bodies of Julia and her son to a Russian anatomy professor named Sokolov, who embalmed and publicly displayed them.

When Lent found out, he did everything to regain control over the bodies, so that he could profit from displaying them. He exhibited the bodies of his wife and son in glass cabinets all around the world.

And then he met Marie Bartel, a woman who suffered from the same rare condition as Julia, and who also resembled her. So, Lent sought money in that too. After marrying Bartel, he hid the embalmed bodies, renamed Bartel as Zenora Pastrana and exhibited her as Julia’s sister. After Bartel’s death, he returned to exhibiting the embalmed bodies.

Someone stole the bodies from Lent and they were later disposed of in Norway. In 1967, they were finally recovered by the police and kept in storage in the university in Oslo until 2005. Then the Mexican artist Lauren Anderson Barbata brought Julia’s body back to Mexico.

Read another story from us: The Royal Dwarf “Wedding” Which Ended in a Drunken Brawl

She told the New York Times “I felt she deserved the right to regain her dignity and her place in history and in the world’s memory.” Finally, on February 12, 2013, Julia Pastrana was buried and laid to rest.