The Russian “Dog-Faced Boy” who Became a Global Sensation

In 1884 the celebrated showman P. T. Barnum introduced to the American public what he called “The most prodigious paragon of all prodigies secured in over 50 years.”

It was indeed remarkable and caused a great sensation in the U.S. The curious public gathered to glance at the wonder discovered in a distant forest of Russia.

As soon as the curtain lifted, the audience saw a young man, dressed in a neatly tucked Russian military uniform. 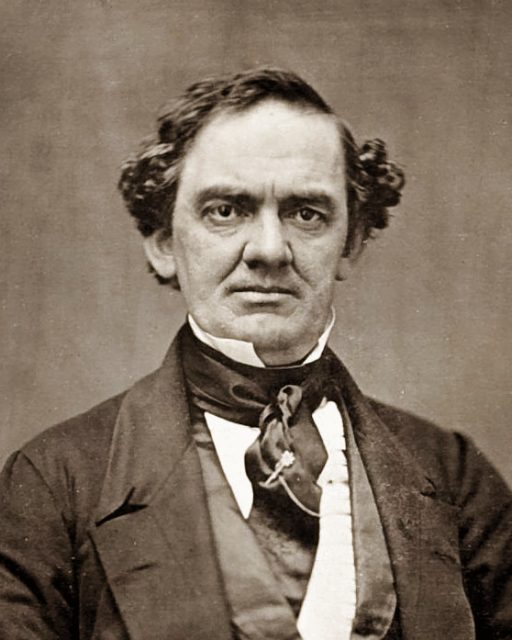 His entire face was covered with silky brown hair and resembled that of a dog rather than a human being.

The marvel was standing still, observing the anticipating crowd and suddenly released a deep growl.

Ladies gasped, gentlemen gazed with their mouths open, and finally, the audience burst into applause. Jo-Jo, “The Dog-Faced Boy” was a success. 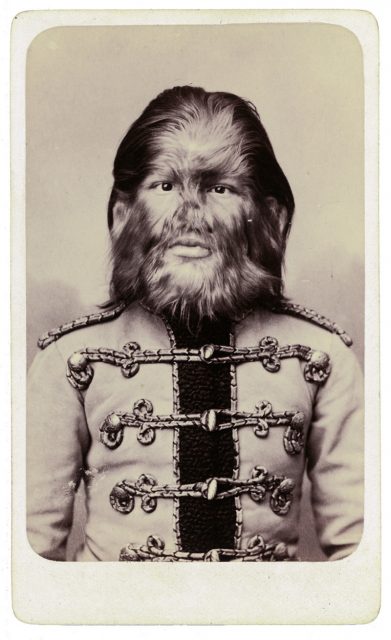 Jo-Jo’s real name was Fyodor Yevtishchev. His father Adrian suffered from hypertrichosis, a hereditary disease that manifested itself in excessive hair growth all over his face and body.

Adrian and Fyodor were discovered in a Russian forest by two hunters who took great interest in the unusual family and brought them to a local fair. 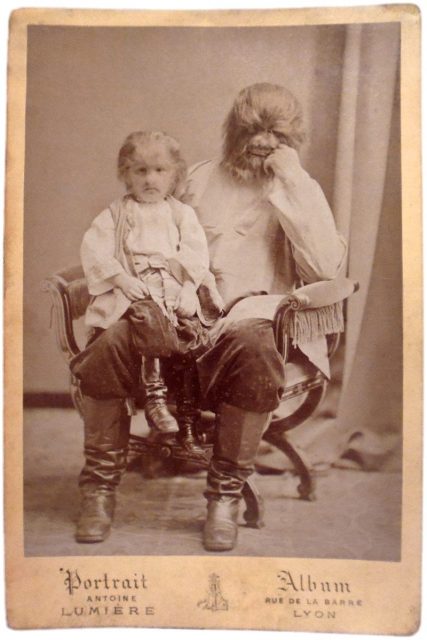 Fyodor with his father.

Adrian could barely speak and tried numerous times to escape back to the wilderness, however, he was prevented from doing so by being carefully watched and kept in comfortable conditions.

In 1874 The Liverpool Mercury provided a detailed article on the story of the “Hairy-faced people” and their journey to Europe. According to the tabloid, Adrian and Fyodor were treated by their captors with great care and attention. 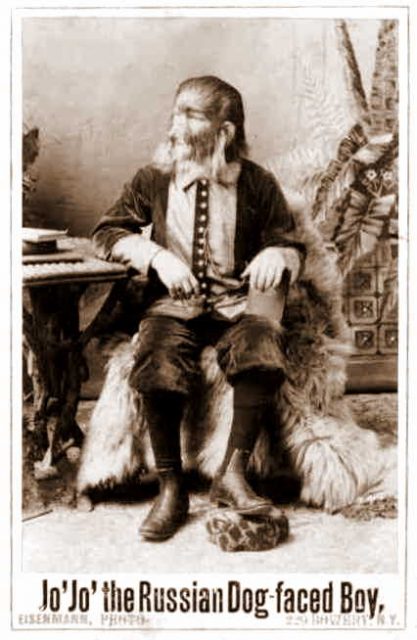 The two were exhibited around Russia and even introduced to the Tsar himself, who regarded them with great interest. Later on, they were brought to Europe, where their appearance caused a great stir.

On arrival to England, the family was placed in a luxurious hotel and examined by a number of doctors. They agreed that Adrian was about fifty years old and had five teeth in total, while his son possessed only four. 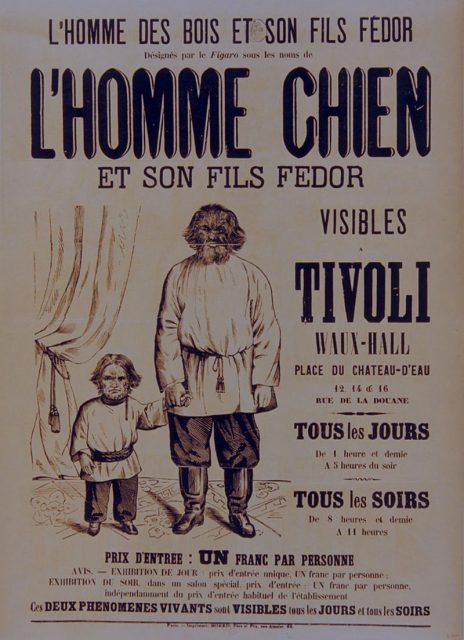 Poster : The Dog Man and His Son Fedor.

The physicians came to the conclusion that Fyodor was about two or three years old and inherited the unique condition from his parent. As to the boy’s mother, the only thing Adrian could remember was that his wife was dead.

One of the hunters that brought the family to England mentioned that he had interviewed some peasants from the village near the forest where the marvels were discovered. Many of them claimed that they had seen a dog-faced woman nursing a baby in the woods. 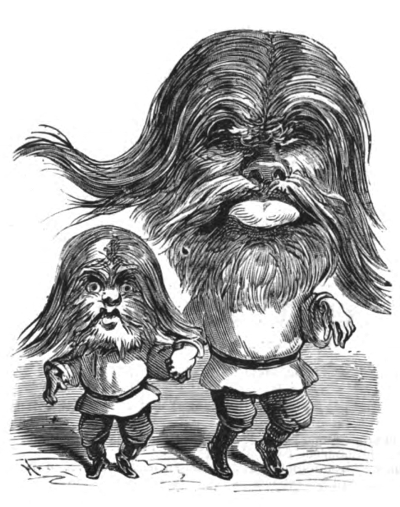 The question remained among the experts was whether the two presented were a biological joke of nature or the last descendants of a hairy-faced race of people.

Jolly little Fyodor, who appeared to be very active, playful and curious, charmed those around him. He spoke broken Russian and was very much amused to see the experts examining his father. When one of the senior doctors approached young Fyodor, the boy pointed merrily to the physician’s bald head and then to his own face, suggesting to share some of his silky hair with the old man. 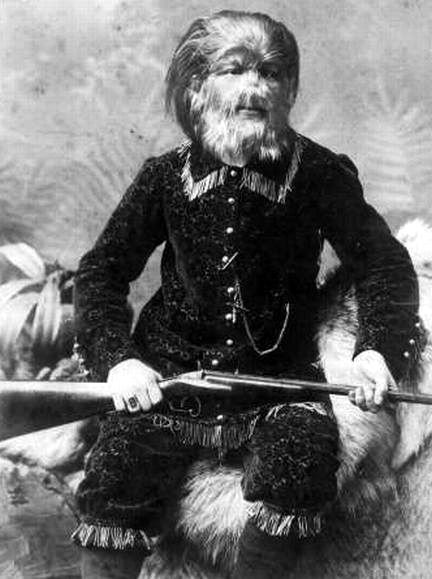 It seems that wherever life placed him, Fyodor would instantly become everyone’s favorite. Another English newspaper called The West Cumberland Times introduced him as a happy child with a very nice face and very playful manner.

Traveling around Europe at an early age allowed the boy to learn foreign languages. Later, he would amaze his audience by addressing them in German or French.

According to the periodical, Fyodor’s hair was parted all the way down his face, and could be brushed from each side of the nose, just like that of a Skye terrier. 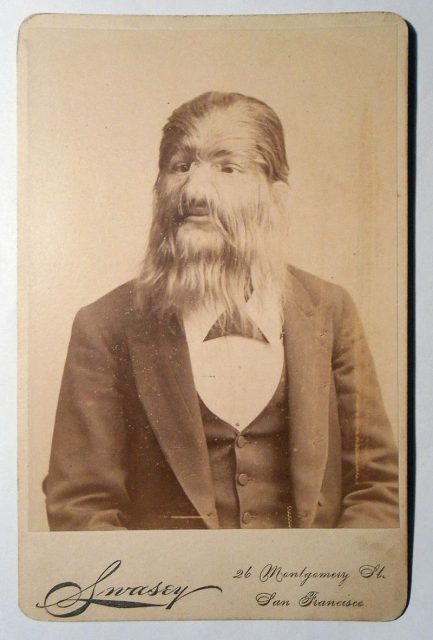 English newspapers were kind to the unusual visitors. Many of them stated that there was nothing repulsive in Adrian’s appearance and described the two as an extraordinary and wonderful phenomenon. Adrian seemed to enjoy the comfort of civilization and, in particular, cognac. He died supposedly succumbing to a liver disease he had developed due to excessive drinking.

At the age of 16, Fyodor met one of Barnum’s talent agents and signed a contract with the famous impresario.

Phineas Taylor Barnum possessed the exceptional talent of promoting his performers. Some of the advertising techniques he came up with have been used in marketing ever since. 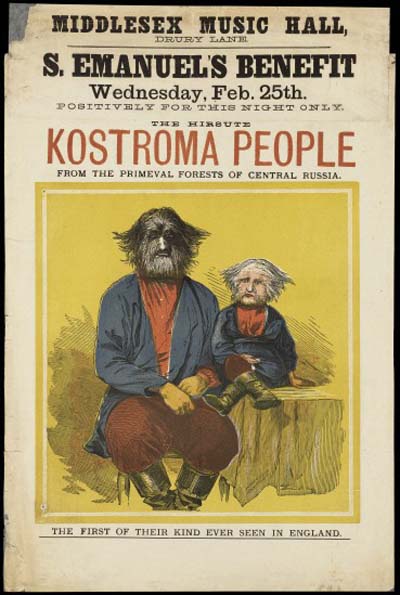 He knew that in order to attract more spectators, Jo-Jo needed an impressive story behind his character, so he created one without hesitation. According to the legend, the boy was discovered by hunters in a remote forest of Russia along with his dog-faced human father who turned out to be so violent and wild, that the hunters had no choice but shoot him right away.

With a mysterious and horrifying background of this kind, Fyodor attracted crowds of people in New York and all around the States. An agent from the Russian Government would accompany Jo-Jo during the American tour to ensure his safety and comfort.

According to The Marion Star newspaper, Jo-Jo spoke Russian and German tolerably well and sometimes made himself understood by using basic English, which the American public enjoyed very much.

Read another story from us: The Multi-Talented ‘Bearded Lady’ who Became a Victorian Sensation

During his career, Fyodor would travel with Barnum’s show all over the world. His last performance took place in Greece, where he contracted pneumonia and died in the city of Saloniki in 1904.