Oktoberfest is in full and frothing swing over in Munich. This celebration of Bavarian culture, with the emphasis on sausages and of course beer, has traveled around the world.

However, the German version is the original and the best.

It’s been running since 1810, and those 200 + years have witnessed events from horse racing to tree climbing, not to mention the vast parades of people and businesses resplendent in their historic dress. This worldwide wonder has only been stopped a handful of times, for wars and even a terrorist attack in 1980. 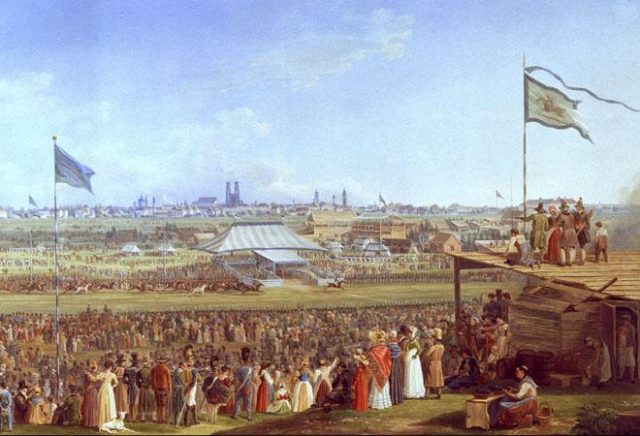 Horse race at Oktoberfest in Munich, 1823.

While the festival is a long-standing tradition, with its origins in the wedding of Crown Prince Ludwig to Princess Therese of Bavaria, that certainly doesn’t make it staid or boring. Oktoberfest has a wild side that isn’t just to do with a constant supply of alcohol…

A big part of Oktoberfest is the fairground and one of the most sought-after attractions is the Mondlift, which translates as “Moon Lift.”

The ride is like a big wheel, though one with a difference! The experience was described by author Bradley Howard in his 2014 book The Cycle Touring Diaries – Diary 2. 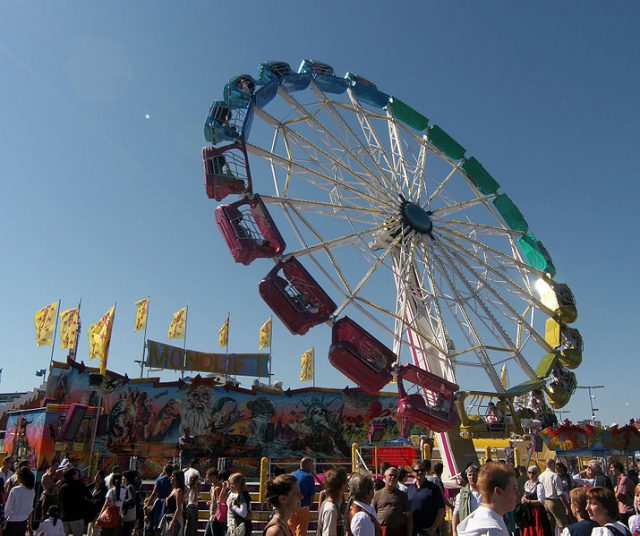 When touring the Munich Olympic village he found himself “in a buggy attached to a large spinning wheel. The wheel begins parallel to the ground, but during the main part of the ride, is at a ninety degree angle to it. The Mondlift…was 3 Euros for a go on it, and was more than worth that given all that pleasure that I got from being sucked back into my chair, whilst being propelled around on it.” 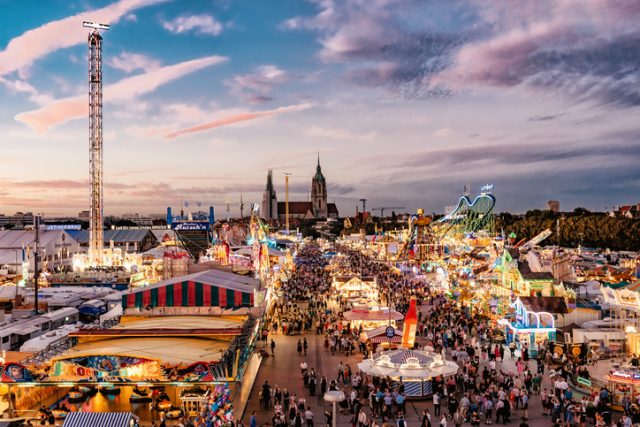 Not the wisest course of action after a plate of sausages washed down with beer but definitely something for adrenaline junkies. In fact, organizers are upping the ante this year with a ride named after the movie Predator. The Telegraph writes about a “gondola-like constructions which flip and tumble on two hydraulic poles.”

Whirling through the air on a fairground ride is small beer, pardon the expression, compared to wielding a weapon. Armbrustschützenzelt translates as “crossbow firing tent.”

Though it’s just one of the many tents found on site, it must take the crown for wildest and most dangerous. 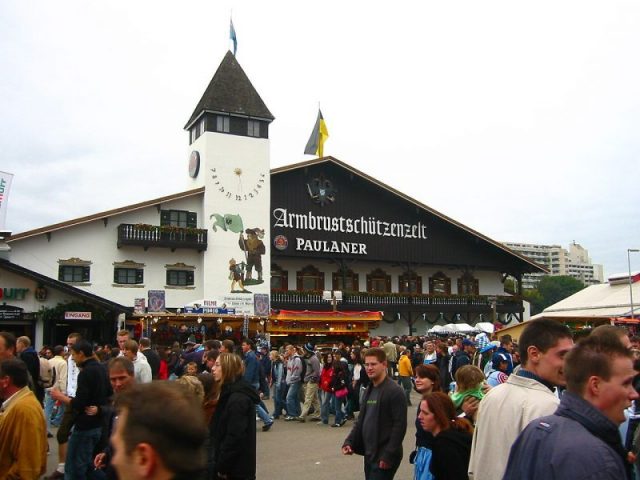 The website Oktoberfest.info dates this part of the fun back to 1895. They refer to the “crossbowmens guild ‘Winzerer Fähndl’” which “built the first tent at the Oktoberfest to entertain riflemen and visitors but also to hold shooting championship competitions.”

The Fest has a keen interest in security, particularly in the current climate, so personal safety should be paramount. Having said that, it might be worth patrons practicing a ducking motion before they head inside…

Sausages and pretzels are the order of the day at Oktoberfest but they aren’t the only game in town when it comes to grabbing a snack. Attention is certainly drawn by the Steckerlfisch, which means “fish on a stick” in the Bavarian dialect. 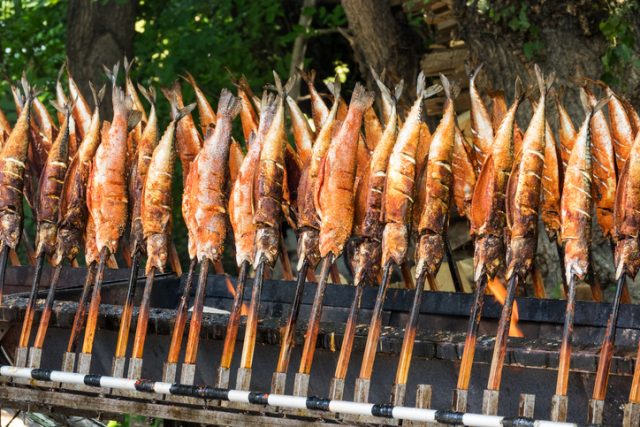 Travelsignposts.com describe the preparation and cooking of this tasty treat, saying “The steckerl or stick is thread lengthwise through the gutted whole fish and arranged head-down, at an angle over the charcoal fire… The fish is brushed with butter or marinade to make the final cooked product crispy. And, the reason for having the Steckerlfisch placed at an angle is so that the fat drains down the stick and not into the fire.”

Typically a mackerel is used in the recipe. It doesn’t win any points for attractiveness but this strange-looking stomach filler remains enduringly popular with attendees.

While performing fleas are entertainment from another era, they still make an appearance at Oktoberfest. Indeed the festival is one of the last places people can see a fully-fledged circus complete with tiny (yet strangely invisible) performers in operation. 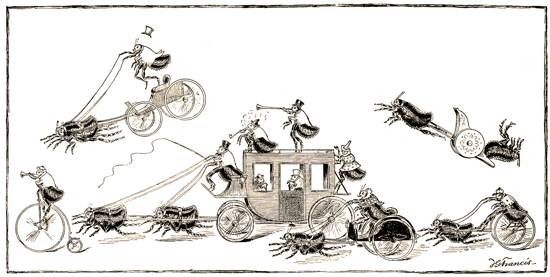 A flea circus: “The Go-As-You-Please Race, as seen through a Magnifying Glass,” from St. Nicholas Magazine, USA, 1886.

However, the crazier side of carnival attractions can be laced with tragedy. A 2013 Metro article relayed the sad demise of a 300-strong “troupe,” who were a fixture at Oktoberfest. The fleas were killed off by cold weather and the details just so happened to be published on April Fools Day.

According to the paper, “The circus director Robert Birk was left devastated after making the grim find, despite the fact the story was initially ridiculed by many due to its timing… He managed to fulfill his engagements at an open-air fair in Mechernich-Kommern thanks to help from Professor Heinz Mehlhorn, who was able to provide 50 more fleas in his capacity as a parasite expert.”

Apart from all the alcohol consumption, games and activities at Oktoberfest, there’s a naughty side to proceedings that revolves around the unlikely subject of apron tying. Those wearing the Dirndl form of traditional dress may be trying to send signals as to their availability.

Oxford Dictionaries writes that the outfit “consists of a bodice, blouse, skirt, and apron, and the name originates from the south German diminutive term Dirne, meaning ‘girl’.” 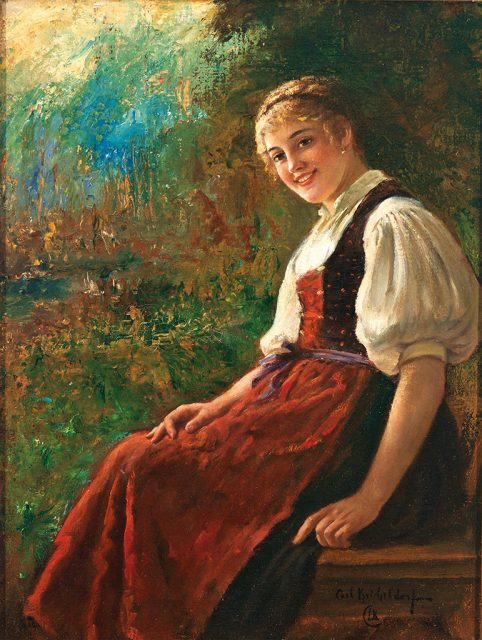 Portrait of a girl wearing a dirndl dress.

It’s all a matter of knowing how to spot the signs. The Oktoberfest.de site claims that if the apron bow is tied to the left, then the wearer is unattached. If it’s tied on the opposite side a potential suitor is playing with fire!

Being tied in the middle indicates a “‘somewhat taken but maybe single’ or some other confusion about the wearer’s relationship status.” Surprisingly the article goes on to add: “It’s the traditional sign to tell you: Virgin!”

Finally a bow tied at the back means two things. That “Either the lady is a widow or a waitress. Try and assess the situation properly before offering your condolences to the waitress or tipping a widow.”

Read another story from us: 7 Popular Wedding Traditions with Fascinating Origins

It’s certainly a challenge to have, particularly when the woo’er is under the influence. As Oktoberfest situations go, that is one of the wildest!