The Creepiest Halloween Costumes from a Century Ago

Every year on October 31st, people all over America dress up in scary costumes, throw crazy parties, or take their kids trick or treating around the neighborhood. But it wasn’t always the fun, candy-fueled time it is seen as today.

Halloween originates from the Gaelic festival of Samhain which is celebrated from October 31st to November 2nd, marking the end of the Celtic year and celebrating the start of a new one. According to Gaelic tradition, it not only marks the division between the lighter half and darker half of the year, but it’s also a festival of the dead.

Samhain is believed to be the time when the division between this world and the spirit world is at its thinnest, allowing spirits of the deceased to return to their original homes.

As Christianity spread through Europe, it adapted many pagan traditions. Samhain became All Saints — or All Hallows — and All Souls in the Christian calendar, days that were still a celebration of the dead but the festival lost significant parts of its pagan roots. 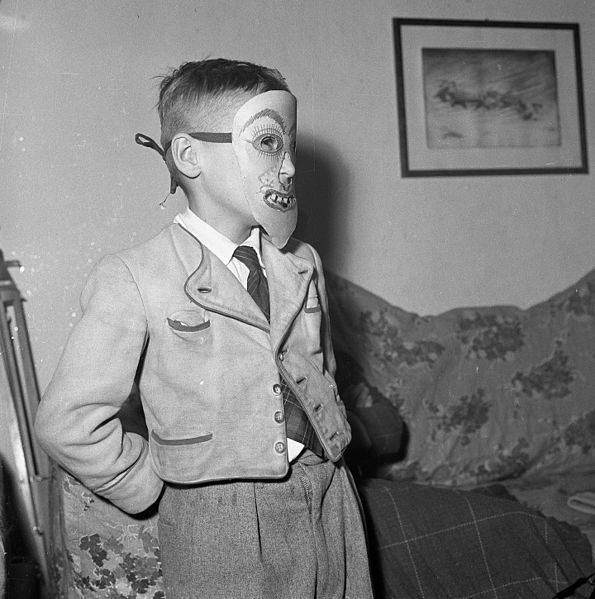 Boy with a creepy mask. Photo by Fortepan CC BY SA 3.0 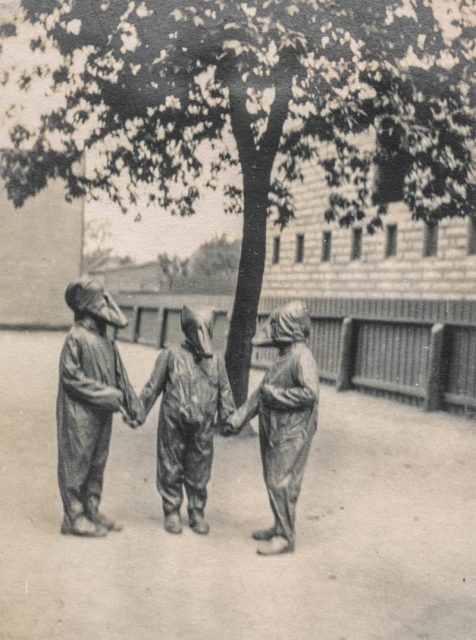 Children in costume, dressed up as rats, 1908. Photo by SimpleInsomnia FLickr CC BY 2.0 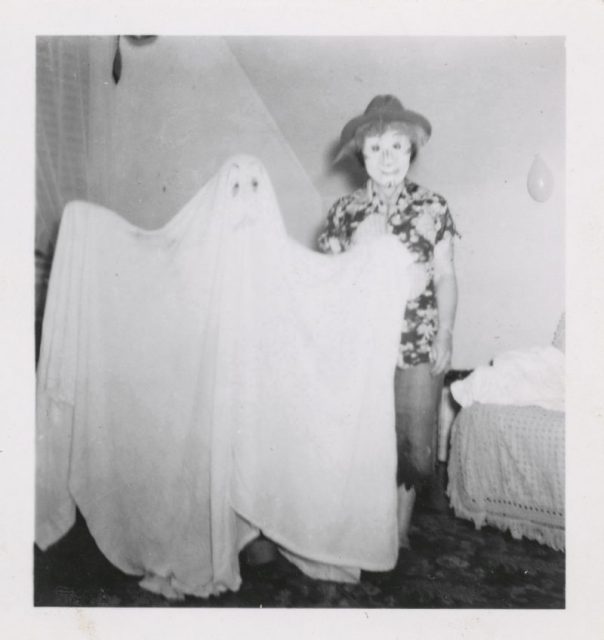 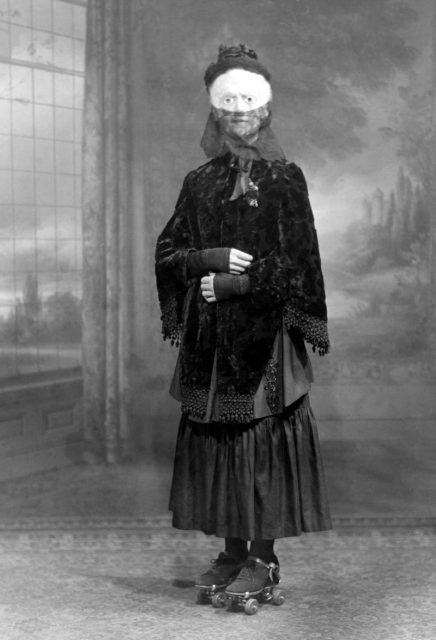 Woman in a costume – wearing roller skates so she can glide along like a ghostly spirit. Photo by Getty Images 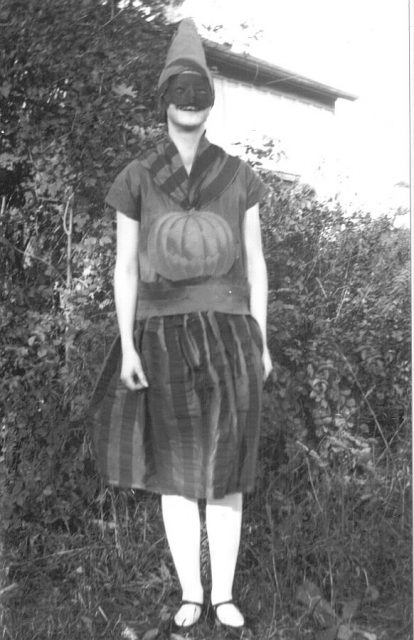 Girl in a Halloween costume in 1928, Ontario, Canada. Can you make out the scary face in the pumpkin?

Some of the earliest Puritan colonists from England brought their version of “play parties” to the New World of America, which they held on the evening before All Hallows. These were a celebration of the harvest, but often also incorporated echoes of Samhain with guests sharing spooky stories and telling fortunes.

During the Irish Potato Famine in the mid-1800s, an estimated 1 million people fleeing starvation arrived in the United States, bringing with them Celtic Halloween traditions, such as asking neighbors for food or money and pulling pranks.

Gradually, Halloween shifted from being a religious celebration to more of a communal celebration. At the turn of the century, women and children would create papier-mâché masks and handmake all of their costumes.

Considering Halloween more of a rustic holiday, many costumes were inspired by utilizing material collected from nature such as antlers, corn stalks, tree branches, leaves, and more. Meanwhile, other people dressed in witch, ghost, clown, and sorcerer costumes to reflect their interest in spirits and magic. 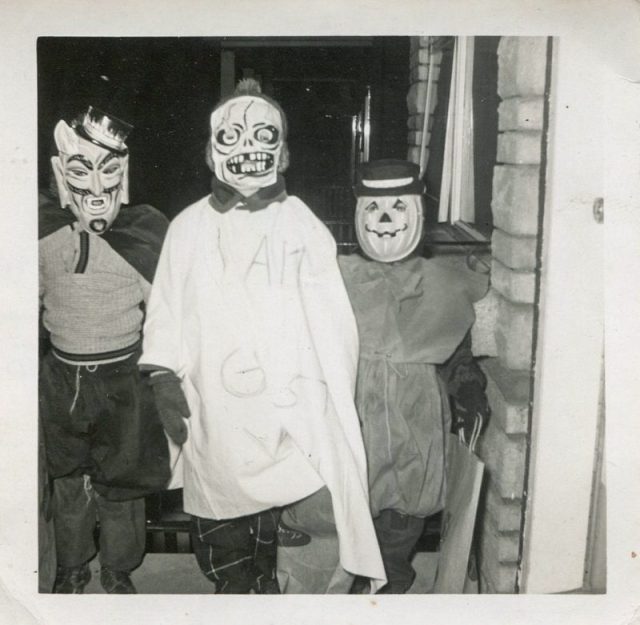 Group of children in Halloween costumes. Photo by Oakenroad Flickr CC BY 2.0 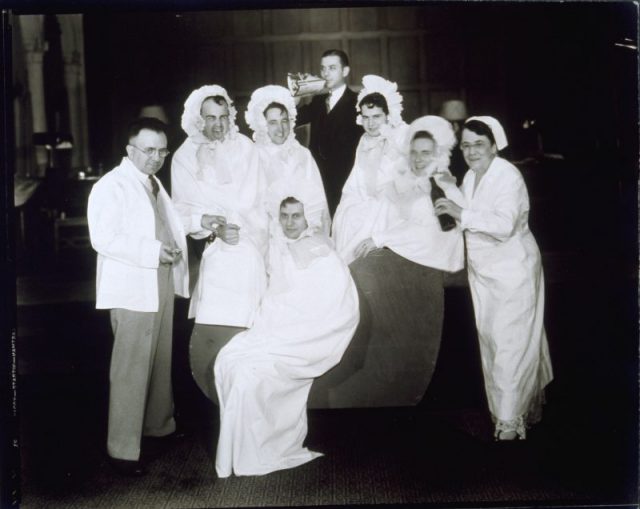 Jessie Tarbox Beals (dressed as a nurse) and seven unidentified men dressed up as babies and doctors. 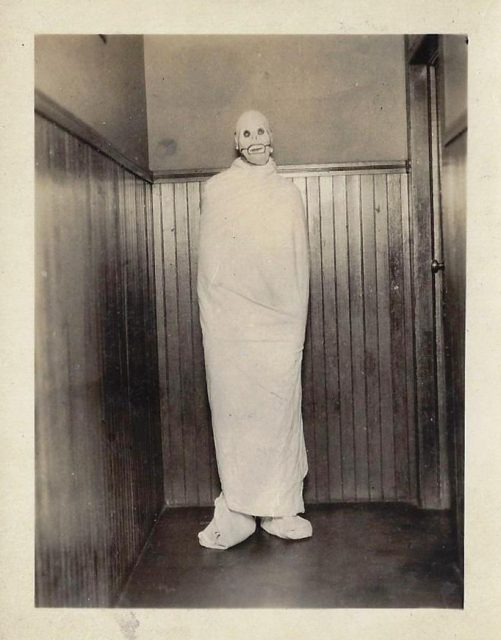 Today you can find virtually any costume you’re looking for in stores or online. However, none of our modern ready-made costumes seem to compare to the creepy handmade costumes from a century ago.

Read another story from us: The Harrowing True Story Behind the “Dingo Ate My Baby” Saying

Many of these Halloween costumes from the 1900s that were intended to be mildly scary now seem eerily spooky. Thanks to the old black-and-white photos you see here, even the costumes that were meant to be “cute” are undeniably terrifying.