Alexander the Great, the man who conquered vast empires and brought in a completely new chapter in the history of ancient times, remains to this day a household name related to glory, conquest and power, but also to youth and pride. Among his peers he was all of this, but also a lot more.

Alexander was, to put it in today’s terms, the life and soul of the party, well known for his hedonistic lifestyle and above all ― an insatiable taste for wine. 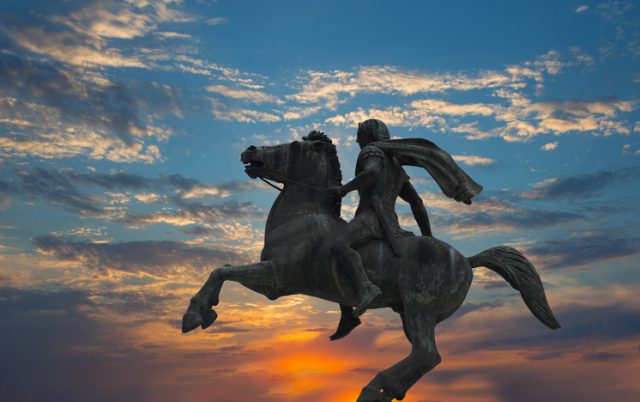 The origins of what some consider his excessive use of alcohol are to be found in his family and the culture to which he belonged.

Ancient Macedonians were known to drink wine undiluted with water ― a trait which their southern neighbors in Greek city-states like Athens considered barbaric.

Alexander was a fairly heavy drinker in his youth, partly due to the pressure to which he was exposed by his over-demanding parents. 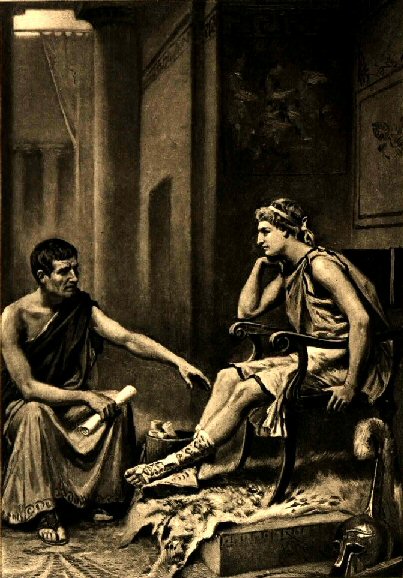 Aristotle, a philosopher from the Macedonian town of Stageira, tutoring young Alexander in the Royal Palace of Pella.

On the other hand, the young ruler of Macedonia was also known as a wise man, educated by one of the founding fathers of philosophy: Aristotle. So since Alexander was no stranger to philosophy, he was accompanied on his conquest by an entourage of thinkers, who served as his advisers.

While stationed in the Persian city of Susa in 324 BC, one of his advisers, a 73-year-old gymnosophist (literally meaning “a naked philosopher”) called Calanus reported that he was feeling mortally ill and that he planned to commit suicide rather than face a slow death. 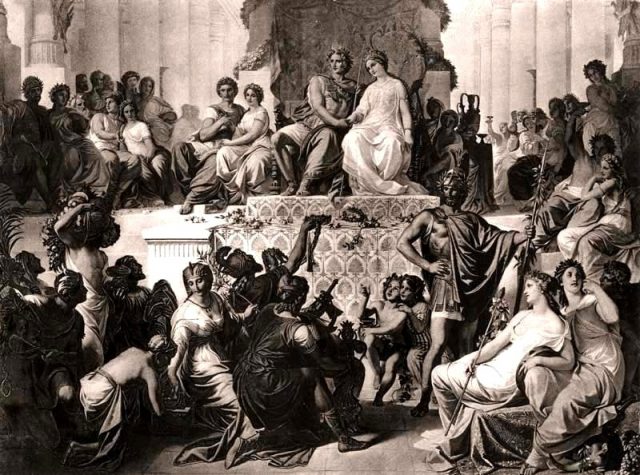 The marriages of Stateira II to Alexander the Great of Macedon and her sister, Drypteis, to Hephaestion at Susa in 324 BC, as depicted in a late-19th century engraving.

Alexander reportedly tried to convince him otherwise, but Calanus had already made his decision. He chose self-immolation as his means of euthanasia and followed his decision through.

One of Alexander’s top military officers wrote about Calanus’ death, describing it as a true spectacle:

“…at the moment the fire was kindled there was, by Alexander’s orders, an impressive salute: the bugles sounded, the troops with one accord roared out their battle-cry, and the elephants joined in with their shrill war-trumpetings.” 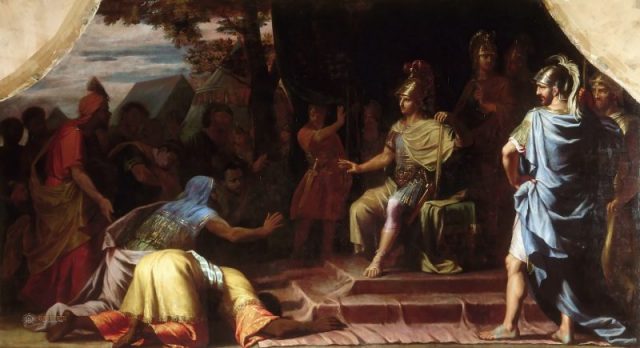 Alexander the Great Receiving News of the Death by Immolation of the Indian Gymnosophist Calanus by Jean-Baptiste de Champaigne, 1672.

After the philosopher was completely consumed by flame, Alexander was struck with sadness ― he had lost a good friend and companion and felt an urge to honor the late philosopher with an event worthy of his mention.

At first, he considered organizing an Olympic Games, right there in Susa, but had to back down from the idea since the natives knew very little of Greek sports. 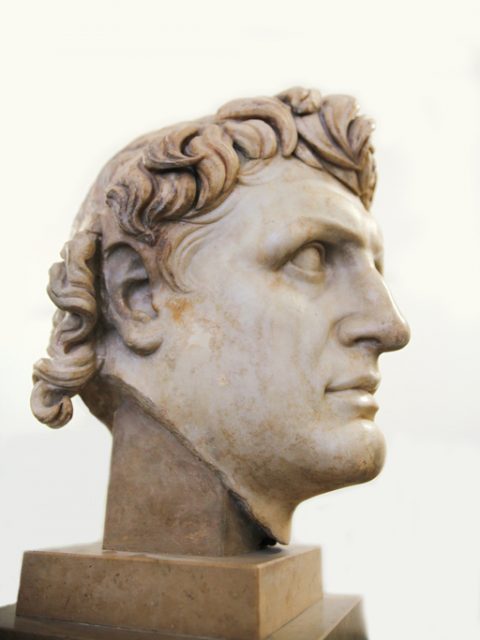 It is important to note that the secret to Alexander’s greatness was his ability to merge different cultures, more precisely Greek and Persian, and to represent this cultural and political merging, he married Roxanna, the daughter of a powerful chieftain of the Persians.

Furthermore, it was in Susa that the young Emperor arranged for a massive wedding between members of the Persian nobility and his trusted officers and soldiers be held ― all in the purpose of legitimizing his conquest, and himself for that matter, as the true successor of Persian Shahs. 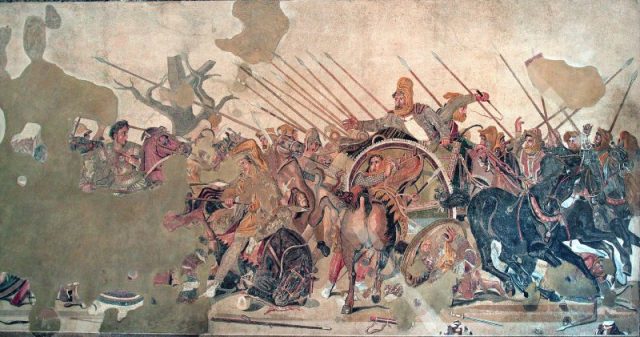 Detail of Alexander Mosaic, showing Battle of Issus, from the House of the Faun, Pompeii. Photo by Magrippa CC BY-SA 3.0

However, since his attempt to bestow Susa with the honor of holding the Olympics failed, Alexander had to come up with a different discipline, which would both serve as a suitable wake, as well as yet another event that would bring Greeks and Persians together. Well, what better way of bringing two cultures together than organizing a drinking competition? 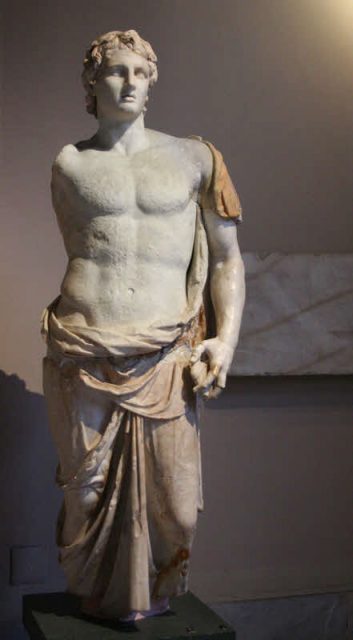 That’s what Alexander must have thought as he gathered the crowd to announce the competition. Very soon 41 contenders were chosen, some hailing from the ranks of his army and others belonging to the local population.

The rules were simple. Whoever drank the most wine was the winner and was to be awarded a crown worth a talent of gold. For those unfamiliar with ancient Greek measures, a talent was equal to around 57 pounds, or 26 kg.

So, a prize worthy of the endeavor for sure. The only problem was, the locals weren’t accustomed to alcohol that much ― well certainly not as much as Macedonians who even made the worshipers of Dyonisus, the Greek god of wine, shiver. 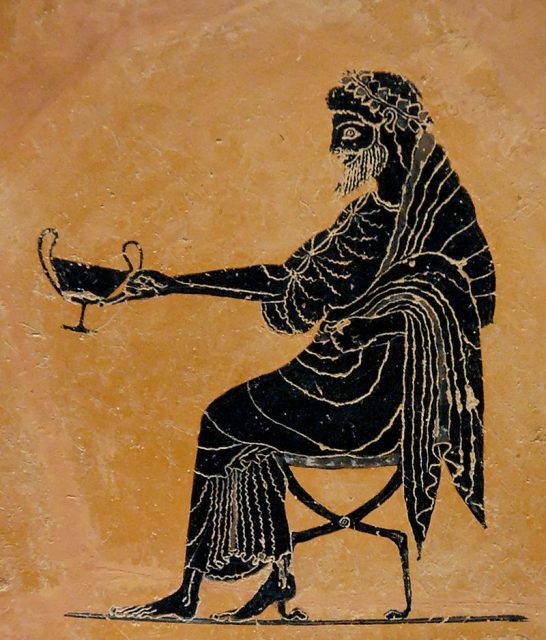 Naturally, the winner was one of Alexander’s foot soldiers by the name of Promachus, who managed to drink 4 gallons of the infamous unmixed wine.

Unfortunately signs of alcohol poisoning appeared during the competition, turning the whole party sour. Around 35 contenders died on the spot, while still trying to drink more wine, and the others, including the victor, died in the following days.

Thus a celebration held to honor the passing of one person soon turned into the burial of 41 people. According to ancient chroniclers of Alexander’s life, all of the contenders died and the entire event was branded a fiasco.

Read another story from us: Alexander the Great was Declared a “Son of God” by Ancient Egyptians

As a bad omen of sorts, the event foreshadowed Alexander’s own death, which happened less than a year after the doomed drinking contest.