Gone But Not Forgotten: 10 Weird Events Of Olympics Past

The 2020 (2021) Tokyo Olympics saw the addition of five new sports — baseball/softball, karate, skateboard, sports climbing, and surfing — to its sports program. These additions may not have been the traditional Olympic sports we’re used to, but they are certainly less weird than some of the events featured in past Olympics Games. Here we break down some of the quirkiest events in modern Olympic history. 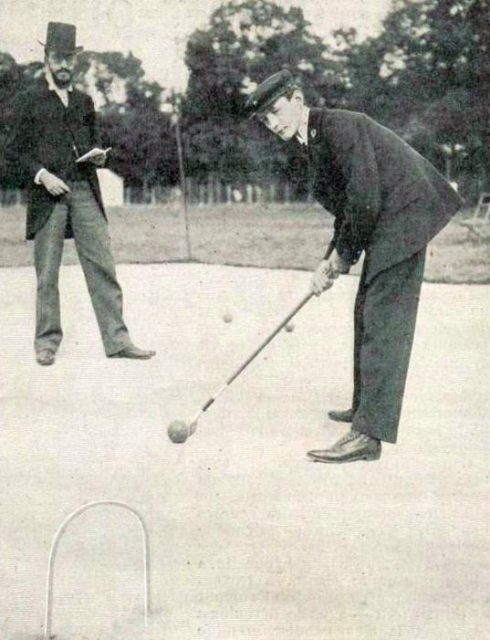 Perhaps not the most exciting sport of all time, croquet was revolutionary in the Olympics because it was the first sport to allow women to compete. It appeared in only one Olympics — Paris 1900 — and only a single spectator purchased a ticket to watch the event.

Although the event was quickly scrapped after this Olympics, perhaps because the official report of the Paris Olympics called the sport “a game with hardly any pretensions to athleticism,” it nonetheless paved the way for female athletes to compete in the Olympic Games. 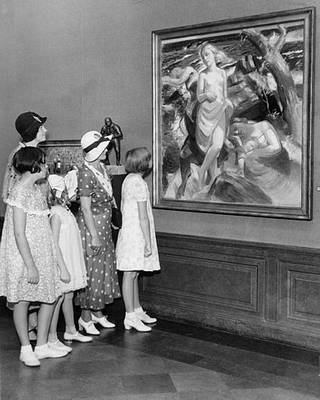 Visitors admiring “At the Seaside of Arild” by artist David Wallin of Sweden at the 1932 Los Angeles Olympics. This painting won the gold medal. (Photo Credit: Wikimedia Commons, Public Domain)

Art competitions were an Olympic “sport” from 1912 to 1948. A total of 151 medals were given to competitors in five different categories — architecture, literature, music, painting, and sculpture. The founder of the International Olympic Committee (IOC) and modern Olympic Games, Pierre de Coubertin, saw artistic competitions as an essential component of his Olympic vision. De Coubertin felt that a true Olympian was not just someone who was athletically talented by also artistically skilled. 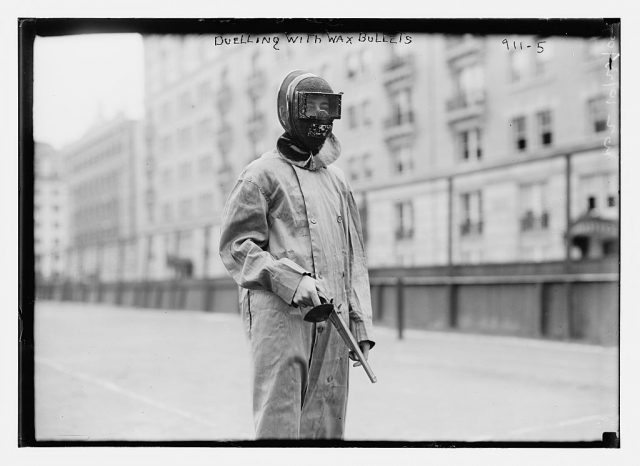 Pistol dueling was only around during the 1906 and 1908 Olympics. At the 1906 Intercalated Games (which at the time was considered to be the Olympic Games but is not officially recognized by the IOC), male competitors fired dueling pistols at plaster dummies from 20m and 30m away.

The event was revamped at the 1908 Olympics held in London, England. During this Olympics, competitors were shooting at each other rather than at a dummy. Competitors wore heavy clothing and a metal mask with goggles to protect themselves, and their pistols were modified with a hand-guard to protect their fingers. A wax bullet was used — for obvious reasons — instead of a real bullet during this competition.

After the 1908 Olympics, the event was dropped. Interestingly enough, an Australian poll held before the 2000 Olympics in Sydney found that 32% wanted to see the sport revived at the Olympic Games. 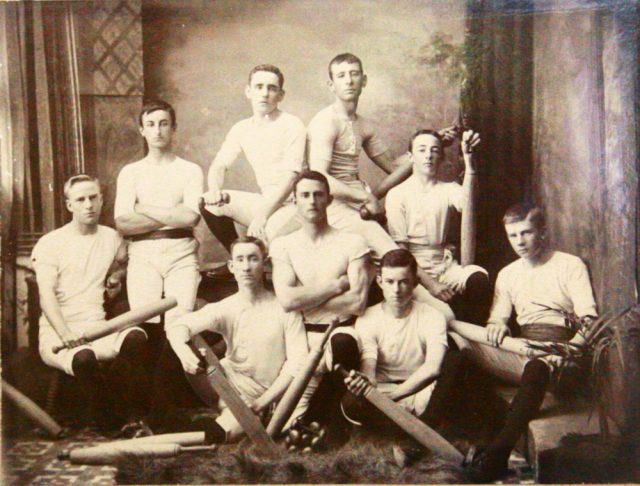 Picture thin bowling pins being whirled around athletes’ bodies, and you’ve got club swinging. Club swinging made an appearance at the 1904 and 1932 Olympic Games. Although the competitors used clubs that are visually similar to juggling clubs or bowling pins, unlike juggling, the club was never allowed to leave their hands.

The sport was retired after 1932, but it can be seen as a precursor to rhythmic gymnastics, first introduced as an Olympic sport during the 1984 Olympics in Los Angeles. 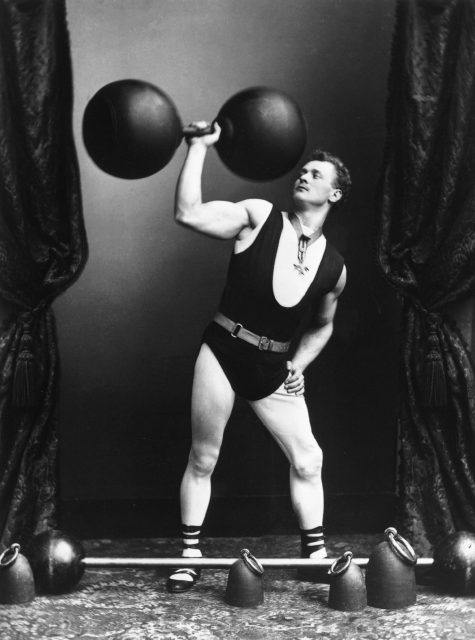 If you wanted to prove you were the ultimate strongman in the early twentieth century you should enter into the one-hand weight lifting competition in the Olympics. The weightlifting one-hand lift was an event in the 1896, 1904, and 1906 Olympic Games.

Only one hand was allowed to lift the weights. Judges scored competitors for their lifts with each hand, and the winner was eventually determined from the combined score of both hands. Each competitor was permitted three attempts. The top three competitors were then allowed an additional three lifts after everyone had gone. We cannot begin to imagine how sore the arms and shoulders of the competitors were after the one-handed weight lifting event wrapped up. 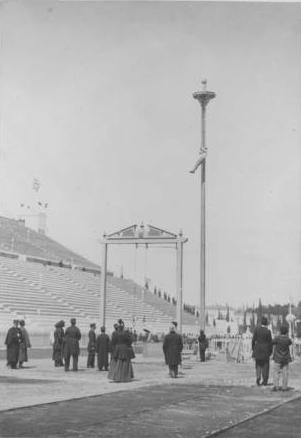 Rope climbing often conjures up terrible memories of gym class in high school for many people, but believe it or not, the activity was once an official Olympic sport. The event appeared in the first modern Olympics in Athens in 1896 and remained on the roster after the 1932 Olympics in Los Angeles.

The ultimate test of upper body strength, competitors in rope climbing raced to the top of the rope in the shortest time possible. They started in a seated position on the floor and were only allowed to use their hands and arms to climb up the rope. At the 1896 Olympics, the rope was 14 meters long but it was eventually shortened to be about 25 feet (or 8 meters).

Arguably the most impressive rope climbing win happened in 1904 when American George Eyser won the event. Eyser had lost his left leg prior to the Olympics in a train accident and competed using a wooden leg. Eyser didn’t just win the rope climbing event at the 1904 Olympics, but also a gold in the parallel bars and long horse vault, a silver in the pommel horse, and a bronze in the horizontal bars. 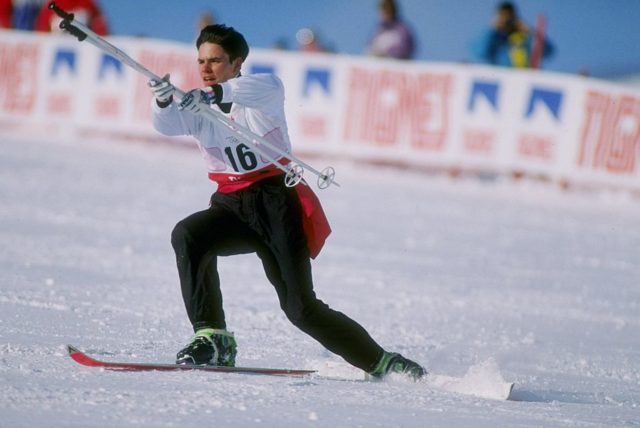 Fabrice Becker of France does his routine during the ski ballet competition at the Olympic Games in Albertville, France. (Photo Credit: Chris Cole / Allsport)

Ski Ballet made an appearance as a demonstrative sport during the Calgary Olympics (1988) and the Albertville Olympics (1992). The event is just as it sounds- ballet but done on skis. Athletes would perform a routine to music for 90 seconds, incorporating spins, jumps, and leaps.

Sadly, by the year 2000, the sport had been almost entirely discontinued. Luckily enough for us, we still have videos of memorable routines to review! 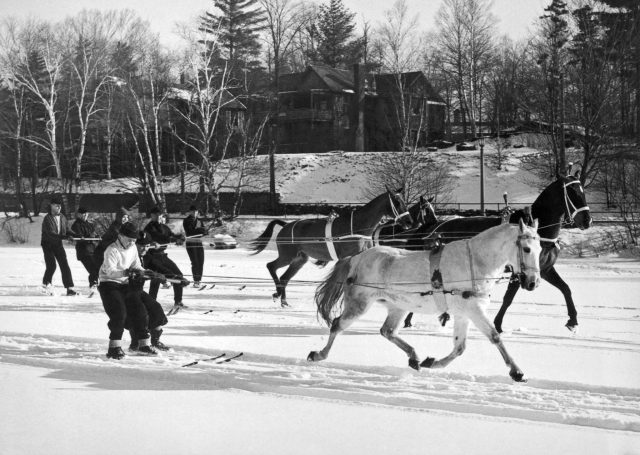 If you have never heard of skijoring, that’s alright, because we have never heard of it either. Skijoring appeared only once during an Olympic competition, during the 1928 Winter Olympics in St. Mortiz, Switzerland. In the Nordic sport of Skijoring, one person on skis is pulled by a dog, horse, or a form of mechanized transportation such as a snowmobile.

During the 1928 Olympics, athletes on skis were pulled behind horses over a frozen lake. There were no riders on the horses and all the athletes competed in the competition simultaneously. Although skijoring was scrapped as an event after the 1928 Olympics, dog sled racing — which is very similar to skijoring — was included in the 1932 Olympic Games. 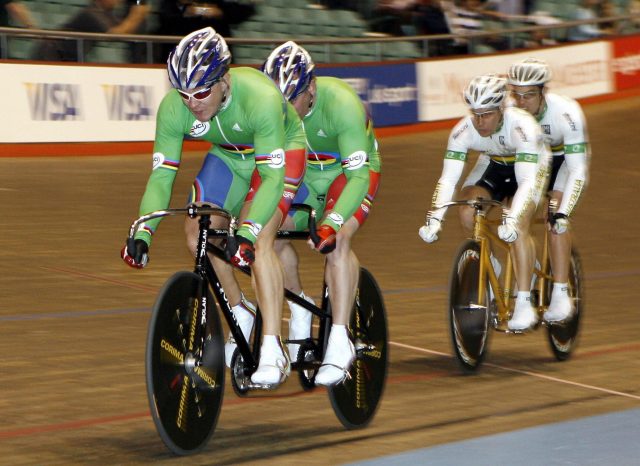 A bicycle built for two was memorialized in the 1892 song “Daisy Bell.” While that song describes a leisurely bike ride, the tandem bicycle sprint event in the Olympics was anything but relaxing. Surprisingly, the tandem bicycle sprint was around for a while. The 2000 meter event was introduced at the 1896 Olympics, with its final appearance being the 1972 Munich Olympics.

One of the most interesting stories involving the tandem bicycle sprint happened at the 1952 Helsinki Olympic Games when two Australian cyclists, Lionel Cox and Russell Mockridge, decided to compete in the event. Although this doesn’t seem like a big deal, the two cyclists had never ridden on a tandem bike together, had never practiced together, and didn’t even have a tandem bike to compete on. Nonetheless, the Australian duo went on to win gold in the event.

Tandem cycling was discontinued after 1972, but a similar event still exists today in the Paralympics. A blind or visually impaired person is seated on the rear seat of the tandem bike, while a sighted person who is not a professional cyclist sits on the front seat. 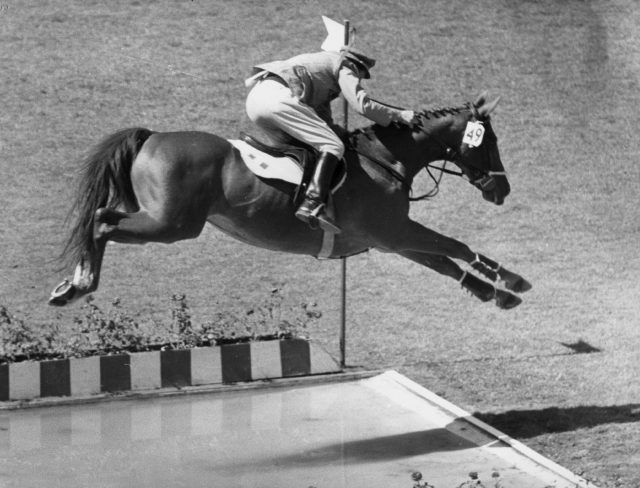 Is it really an Olympic sport if the animal does all the work? Horse long jump made its one and only appearance at the 1900 Olympic Games as part of the equestrian event.

More from us: It involved cars: The disastrous & ridiculous marathon at the 1904 Summer Olympics …

Perhaps it only lasted one Olympics because these horses were not quite the jumpers spectators thought they would be. The winning leap came from Belgium’s Constant van Langendonck and his horse Extra Dry. This just only measured 6.10 meters. To put this in context, the longest long jump made by a human is 8.95 meters — almost three meters longer than Extra Dry’s 1900 jump.