World-famous motorcycle stuntman Knievel was the 20th century’s ultimate daredevil. But what made him so inspiring, not to mention death-defying? Find out with these fun-fuelled facts…

His life had “Evil” beginnings 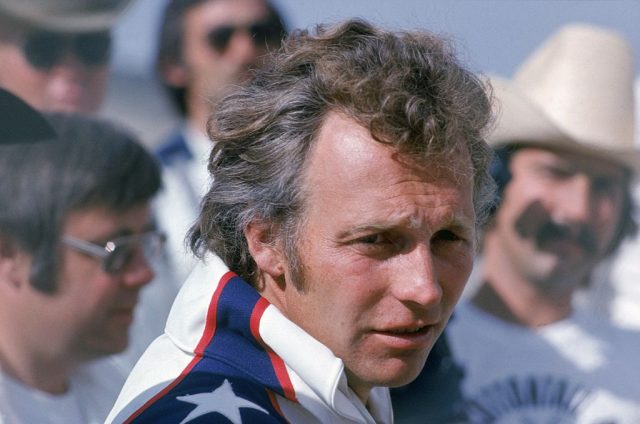 Where does the name Evel Knievel come from? It’s a memorable one for sure.

The surname was all his own. Born Robert Craig Knievel in Butte, Montana, the young man lived an active life and wanted to do stunts from an early age. Falling foul of the law, he spent the night in prison.

There, he met Arthur Knauful, who had the alternate first name “Awful”. According to ABC Balancing Beads, the cops christened Robert “Evil” Knievel to complement Knauful. He changed it later to the more distinctive “Evel.”

He made the earth move… literally

After high school, the future bike wrangler worked for the Anaconda Mining Company. They put him at the controls of an earth mover. Big mistake.

Knievel shut down the city’s electricity after performing a wheelie and hitting the power lines. America had its first taste of a danger-craving legend.

He was nearly a daredevil of insurance 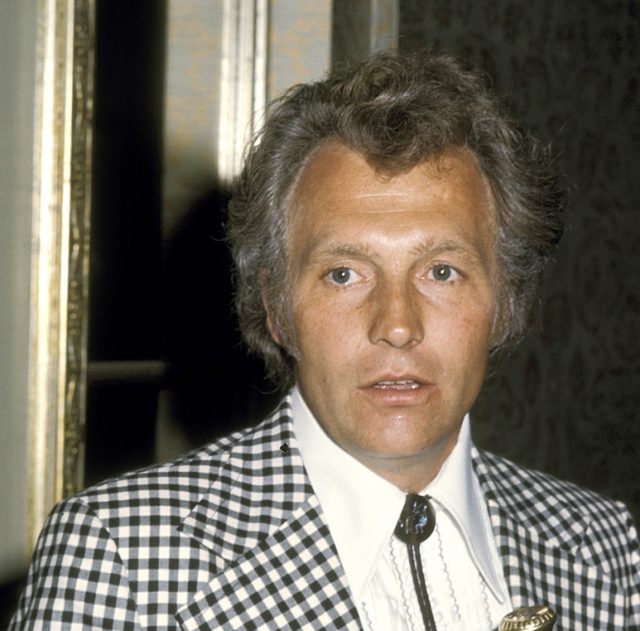 Before entering stunt riding full time, Knievel pursued a more stable occupation – selling insurance. He did well apparently. But his ambition outstripped the needs of his employers.

Website TV Over Mind writes “when he was told that he wouldn’t be getting what he wanted he up and quit and headed off to sell motorcycles.”

Evel Knievel’s first public stunt in 1965 was also a promotional one. Being co-owner of a Honda dealership proved the perfect launchpad for motorcycle mayhem.

Reports differ slightly about the danger involved. Some mention cougars. Others mention lions. Rattlesnakes were certainly involved. Whatever members of the animal kingdom made an appearance, the objective was dramatic. Knievel wanted to execute a full-throttle jump at Moses Lake, Washington.

Mental Floss highlights an interview where the motorized maestro told what happened next. He avoided injury, but “smashed into the edge of the box. All the snakes got out and the people had to run down the mountain”. 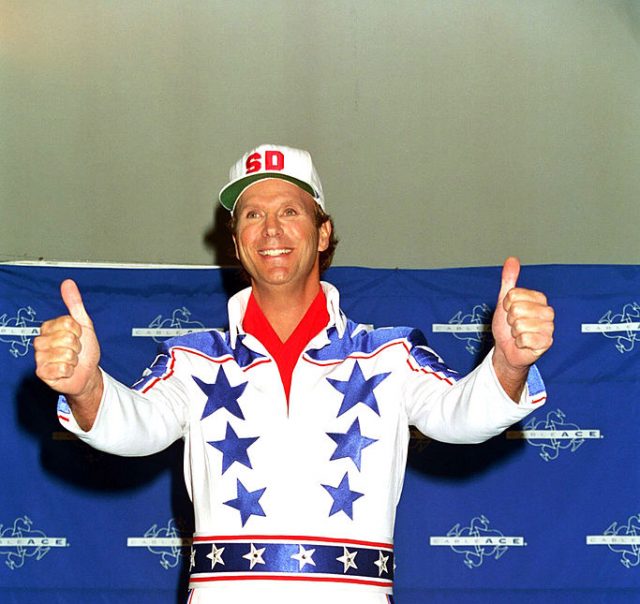 Knievel has been famously spoofed over the years. Comedian Bob Einstein dressed in white as “Super Dave”. And The Simpsons introduced daredevil menagerie jumper Lance Murdock in an early episode.

2007 – the year of Knievel’s passing – saw the staging of a theatrical spectacle based on Knievel’s life. Director/actor Keythe Farley and composer Jef Bek gave him the Meat Loaf treatment.

The jaws of victory 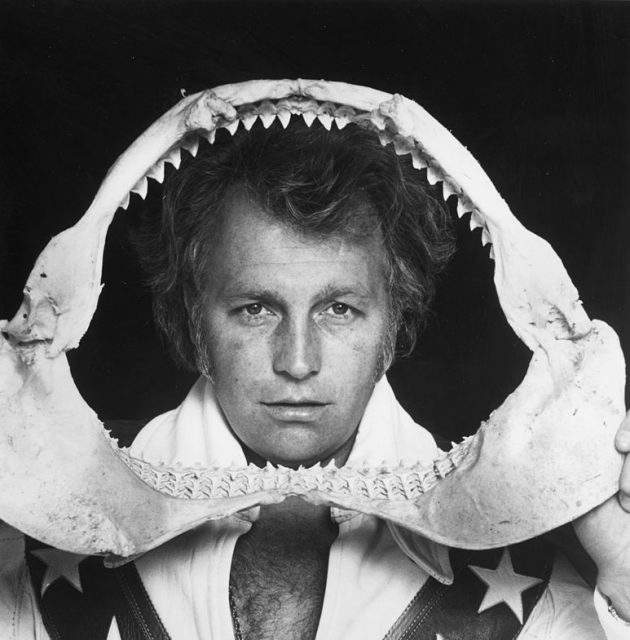 Their antics were ludicrous but not far removed from the man himself. For his final high-profile stunt, he sought to clear a tank full of sharks. This was part of a 1977 TV special.

As described by History, the nail-biting event was more an attention grabber than Evel’s greatest cheating of the Grim Reaper. Apparently, the jump was relatively straightforward, and it’s likely the sharks would have been scared had he fallen in the drink.

It was the cameraman who needed to worry. Knievel crashed after the jump and went into him. Although the Jaws-baiting rough rider did suffer a broken forearm and collarbone!

According to History, the sharks lacked bite, for reasons beyond their control: “They were also sedated as an added precautionary measure”. 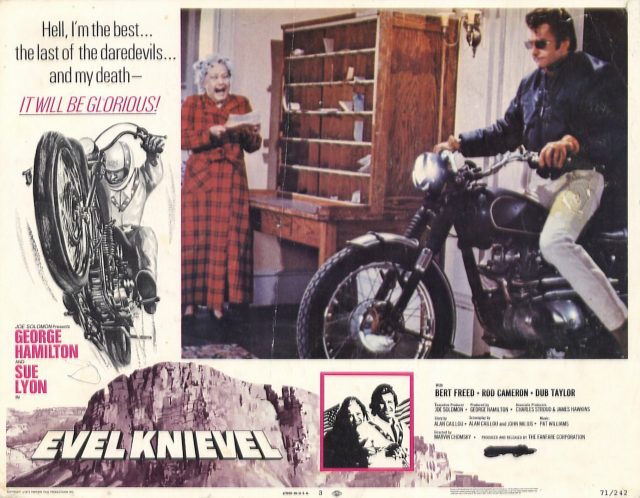 Hollywood star George Hamilton thought it would be a good idea to play Knievel in a 1971 biopic. Evel needed some convincing.

Not one for subtlety it seems, the film’s subject pointed a gun at Hamilton and got him to read the lines, just to check he could handle the role. What would have happened if he didn’t pass the audition…?

He took his name after some brief prison time. Yet Knievel wasn’t a stranger to incarceration during his colorful life.

ABC Balancing Beads wrote he acted like an A-Lister even then, “commuting from prison to his job in a chauffeur-driven Stutz convertible and providing other inmates with limousine transportation to their work-release jobs.”

He picked up a paintbrush in later years

There was a soulful side behind the sparkly outfits and gas-guzzling engines. Knievel spent time “creating and selling paintings of wildlife and western scenes”, as mentioned by 22 Words.

He had beef with the Hells Angels 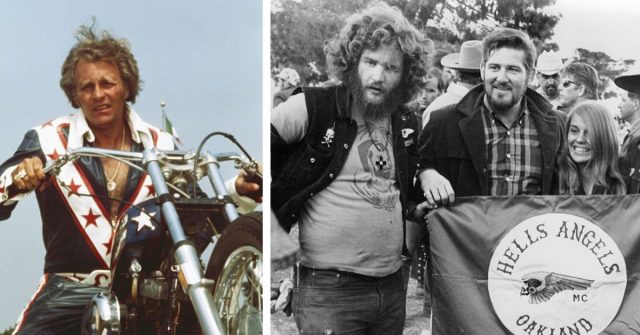 Evel Knievel may have loved revving his engine. However, not all bike fans were his friends. The Hells Angels, in particular, appeared to hit a sore spot.

Tensions boiled over in 1970, when Knievel jumped over 11 cars at the Cow Palace arena, in Daly City California. The idea was to break a record. Instead, some heads got busted.

More from us: “Stone Face” Buster Keaton – King of Early Stunts Who Broke His Neck Without Even Knowing

Trouble started when something was reportedly thrown at Knievel, by an Angel unbefitting of the name. The Six Fifty writes this was possibly “a beer bottle, a wrench… or, more likely, just some expletive-laced insult.” Fists flew and rough house bikers paid the price.

« From The Unexpected To The Bizarre: Birthing Practices Throughout The Ages
Gone But Not Forgotten: 10 Weird Events Of Olympics Past »