What is the correlation between the TV show Happy Days and the popular expression “Jumping the Shark”? Happy Days premiered on television on January 15, 1974. Within a few weeks, kids were at school giving Fonzie’s (Henry Winkler) “two-thumbs up” sign to everyone about everything, and for a while, it seemed like every other sound out of kids’ mouths was the character’s trademark “Ayyyyyy!”. Happy Days was wildly popular – until it “Jumped the Shark”. Yes, Happy Days is the origin of that saying. 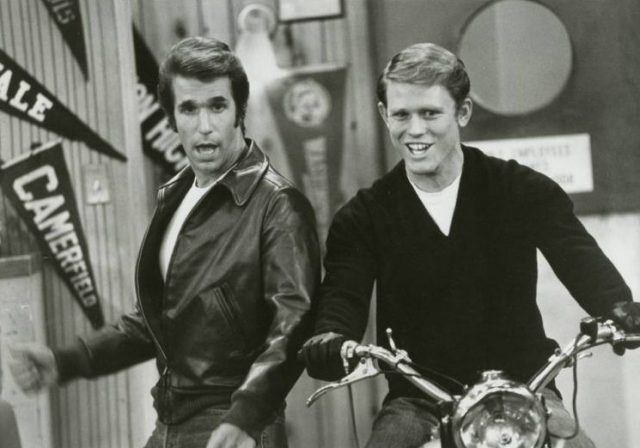 Some of the other characters in the show rubbed off on the kids too, or at least their trademark sayings. Much like “Bazinga!” from The Big Bang Theory when it first aired in 2007, people (meaning adults and children) told each other to “sit on it” when they wanted to tell them off – mostly it was joking.

Sometimes people said “You’re a real Potsie”, after the character played by Anson Williams, but that was kind of rare. Some older boys, who wanted their peers to think they had gotten somewhere with a girl, would take after the character Richie Cunningham’s (Ron Howard) singing the first lines from Fats Domino’s 50s hit Blueberry Hill – “I found my thrill on Blueberry Hill…” 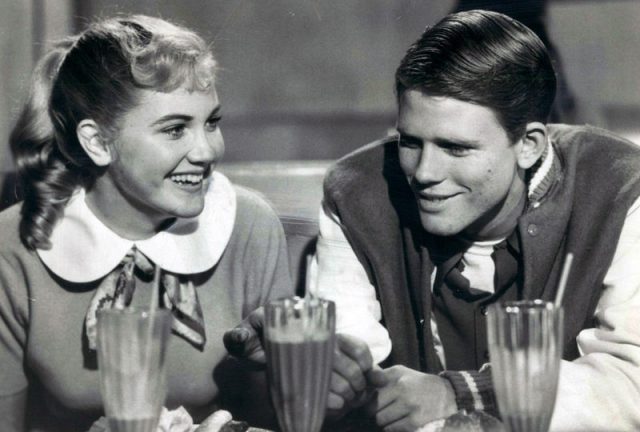 Photo from the premiere episode of the television program Happy Days. Richie (Ron Howard) is on a date with a pretty classmate (Kathy O’Dare) his friend, Potsie (Anson Williams), pushed him into asking for.

High schools held “sock hops,” again in imitation of the show, and some girls would occasionally put their hair in a ponytail, wear their boyfriend’s varsity jacket and borrow some of their mom or grandma’s old poodle skirts. When Fonzie’s one great love Pinky Tuscadero (of course, with her “gang”, the Pinkettes) was introduced, some girls in school began to snap the fingers on both hands in the way the character did on TV – thankfully, Pinky was only on three shows.

The show was one of the biggest hits of the 1970s, and for the first few years of its run, it, along with the ground-breaking series All in the Family, dominated the Nielsen ratings. Beyond the 50s theme, the show did delve into some current issues, but not too deeply. However it did include some interesting and poignant moments when Richie’s father or mother would teach him, or his sister Joanie about growing up. 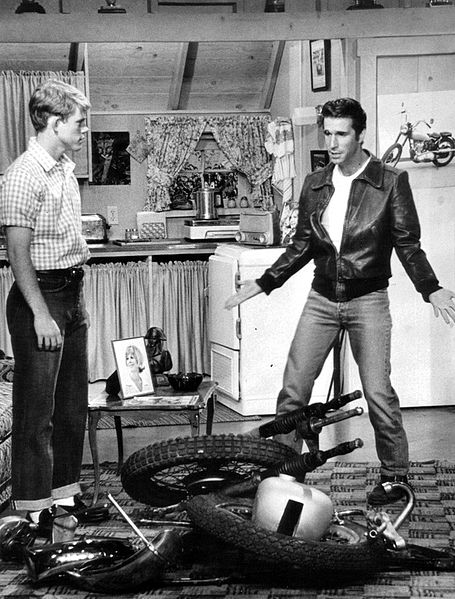 One of the trademarks of the show was that Fonzie, the “greaser”, would not allow himself to be called “chicken”. Early in the show, we learned that he liked to jump motorcycles (which neatly played off the popularity of the sport because at the time, daredevil motorcycle jumper Evel Knievel was planning to jump the Snake River Canyon in his steam-powered Skycycle X-2. In the episode, which is a two-parter, Fonzie breaks his leg trying to set a new record but comes back after much doubt to do it successfully.

Fast forward a couple of years later, and we have Fonzie in California with the Cunningham family and friends. He was recruited by a Hollywood scout to be in the movies and goes to LA, taking his adopted family with him. While there, his leather jacket and jeans on the beach draw the attention of a California golden-boy who calls himself “The California Kid”. Fast forward a bit and the Kid has challenged Fonzie to a water-skiing duel. Part of the reason for this was that Winkler (whose character was so popular he could make “suggestions” to the storyline) wanted to show off his water-skiing skills – at which he was quite good. 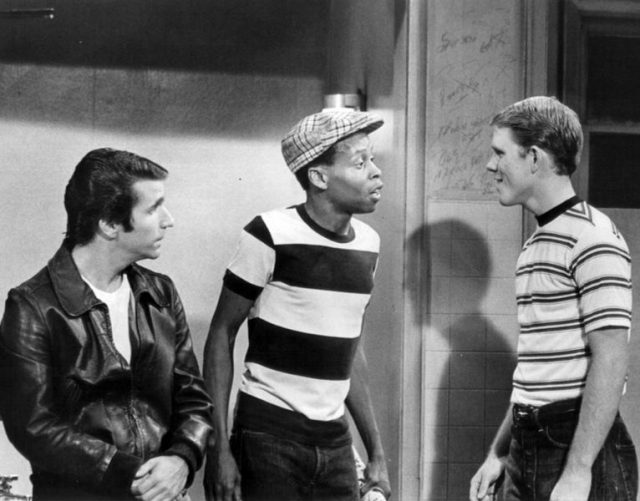 Publicity photo from Happy Days. Pictured are Fonzie (Henry Winkler), John Anthony Bailey, and Richie (Ron Howard), in “Fonzie’s Office” (the men’s room) at Arnold’s drive-in. The episode deals with Fonzie’s new friend and intolerance. When parents learned that Fonzie’s friend, Billy “Sticks” Downey, would be a guest at Richie’s party, they wouldn’t let their teens attend it.

The key to all of this is that the jump isn’t going to be for distance, or over buoys, but over…a TIGER SHARK!!!”, and boy, was that played up in the time that people were still scared about Jaws. Much later, Ron Howard was talking about the show on a podcast, and related how he and Donnie Most (who played “Ralph Malph”) were looking over the script for the show. Most asked Howard: “What do you think of the script?”, to which Howard replied, sort of resignedly, “people like the show – it’s hard to argue with number one.” Then Most looked up and said, “He’s jumping a shark now?”

And with that, a phrase was born, though it would take a few years for someone to come up with it on his own to describe the exact time when anything (especially a TV show) had lurched from success into decline. A student named Jon Hein and his roommate, Sean Connolly were whiling away the hours one day in 1985, when they remembered Happy Days and how it got worse from the moment that Fonzie literally jumped the shark. Hein later wrote two books about the “jumping the shark” moments of TV shows, movies series’ and more, and the phrase became part of the lexicon. 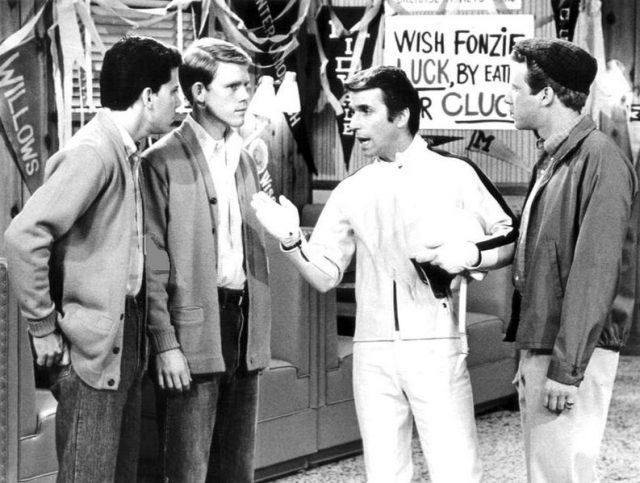 Publicity photo from Happy Days. Pictured are Potsie (Anson Williams), Richie (Ron Howard), Fonzie (Henry Winkler) and Ralph Malph (Donny Most) at Arnold’s drvie-in. The episode deals with Fonzie’s attempt to set a record by leaping over 14 garbage cans with his motorcycle.

Lately, another phrase found its place next to “jumping the shark”, and that’s “nuke the fridge” from the last installment of the Indiana Jones series, Indiana Jones and the Kingdom of the Crystal Skull, when the hero climbs into a fridge and survives an atomic blast. Critics blasted the moment. 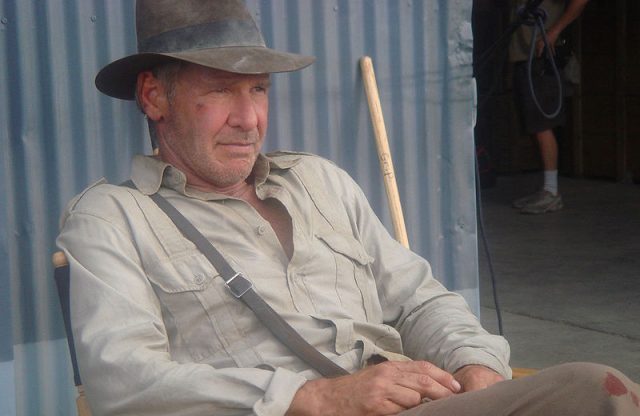 Harrison Ford in Indiana Jones and the Kingdom of the Crystal Skulls. Photo by John Griffiths CC BY-SA 2.0

As for us viewers in 1977, I don’t know what we were thinking. Actually, I was 14 and I do kind of remember being suckered. Making it worse, Fonzie was wearing his leather jacket while water-skiing. The end of the first segment left you hanging while you watched documentary clips of a tiger shark with ominous Jaws type music. “Is Fonzie gonna make it??” I know, in talking to my friends, that we all knew that he was going to – as if ABC was going to have its most beloved character eaten!

But there was part of all of us that thought that would’ve been kind of cool, especially when the show kept going and going. It ran too long, until 1984, and it’s ratings were never the same after Fonzie was caught “jumping the shark”.