Earliest Known Painting of an Animal Found in a Remote Cave

Archaeologists have discovered a wall painting in a cave in Indonesia that could be the oldest figurative painting ever found. It’s more than 40,000 years old … and it’s a cow.

The drawing is even older than the famous images of animals found in caves in France and Spain. The newly discovered one was seen in a remote cave in Borneo by a team of archaeologists from Australia and Indonesia.

“The oldest cave art image we dated is a large painting of an unidentified animal, probably a species of wild cattle still found in the jungles of Borneo,” said Maxime Aubert, the study lead author and an archaeologist and geochemist in Australia, in a statement. “It is now the earliest known figurative artwork.” 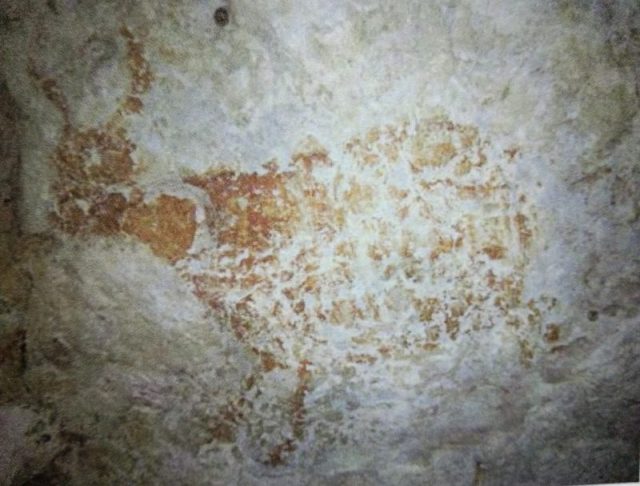 In an article published in November 2018 in Nature, the scientists said that it now seemed certain that rock art emerged in Borneo at around the same time as the earliest forms of artistic expression appeared in Europe connected to the arrival of modern humans. “Thus, similar cave art traditions appear to arise near-contemporaneously in the extreme west and extreme east of Eurasia,” the Nature article said.

“Whether this is a coincidence, the result of cultural convergence in widely separated regions, large-scale migrations of a distinct Eurasian population or another cause remains unknown.”

Aubert told NPR that this painting is one of thousands of drawings and stencils in a group of limestone caves within remote mountains at the edge of the island of Borneo, a part of Indonesia called Kalimantan. 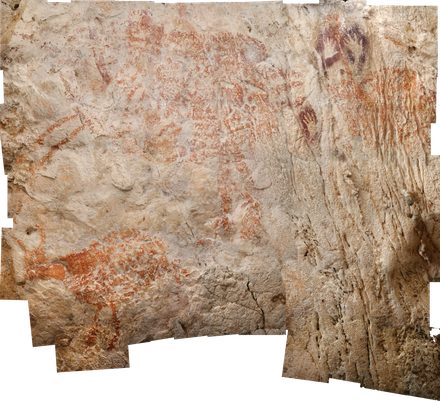 Archaeologists went there in the 1990s looking for cave art. When they showed local people photos of art, the locals responded, “Oh, yeah, we’ve seen something like that in the caves.”

However, it wasn’t so easy to get into those caves.

To reach them, Aubert and the team “used machetes to hack through thick jungle in a verdant corner of the island,” according to AP News.

“Strapping on miners’ helmets to illuminate the darkness, they walked and crawled through miles of caves decorated with hundreds of ancient designs, looking for artwork that could be dated,” continued the AP. “They needed to find specific mineral deposits on the drawings to determine their age with technology that measures decay of the element uranium.” 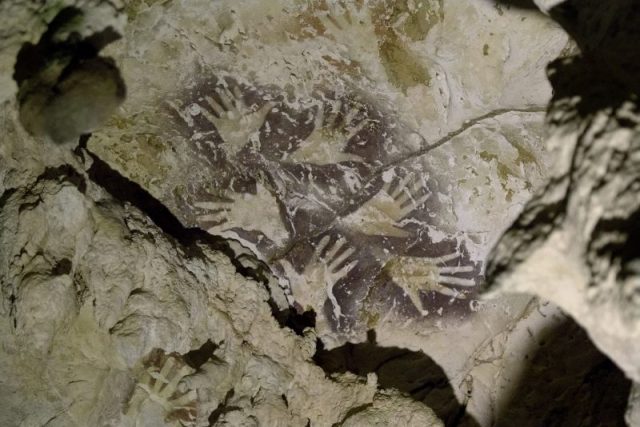 Aubert said, “Most of the paintings we actually can’t sample.”

To date the painting, they used a form of technology that measures the elements uranium and thorium in the rock underlying the paintings. This way, they found that the oldest art was anywhere from 40,000 to 52,000 years old.

Small, thin spall flakes of pigment were collected for complementary analyses during sampling for the dating of the painting. Very small chips of rock art paint (micro-spall) were crushed into homogenized powders manually using an agate mortar and pestle.

Some of the work was clearly representational art and “not just … an abstract design,” Aubert says.

“Someone decided to depict what they saw, like an animal or like another human,” Aubert says. “And they made that, they did that on purpose.” 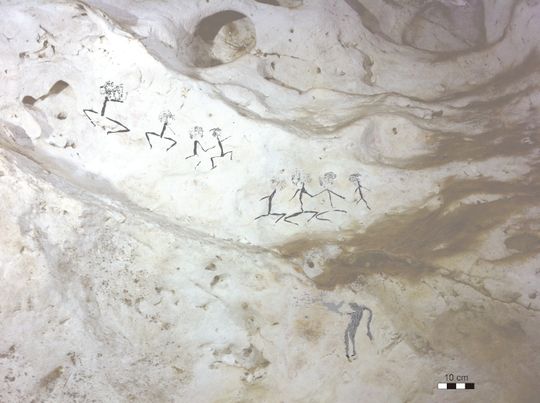 The experts believe that painters kept returning to the caves and adding new work until about 20,000 years ago, with their work getting more complicated over time.

Borneo was connected to the mainland of Southeast Asia when the first figurative drawings were made about 40,000 years ago, and scientists believe that this is also the time when modern humans arrived in Europe. The drawings of animals in the French cave of Chauvet have been dated to about 33,500 to 37,000 years ago.

“Whether new waves of people migrating from Africa brought the skills of figurative cave painting with them, or whether these arts emerged later, remains unclear,” according to AP.   The earliest cave etchings have been found in Africa. They are abstract designs, like crosshatches, and they date to around 73,000 years ago.

The next stage in Indonesia will focus on excavations to learn more about the people who created these paintings.

But the red bull is a bit of a mystery.

“We think it wasn’t just food for them — it meant something special,” said Aubert.