When you live in an area that’s been home to ancient civilizations, sometimes you stumble on remarkable pieces of long-forgotten history. That’s what happened to one Greek farmer living in Crete, not far from the town of Ierapetra, according to Smithsonianmag.

The farmer was parking his truck under some olive trees on his property when the ground beneath him started to give way. After the farmer moved his vehicle to a safer location, he saw that a four-foot-wide hole had opened up in the ground. When he peered inside, he realised this was no ordinary hole. 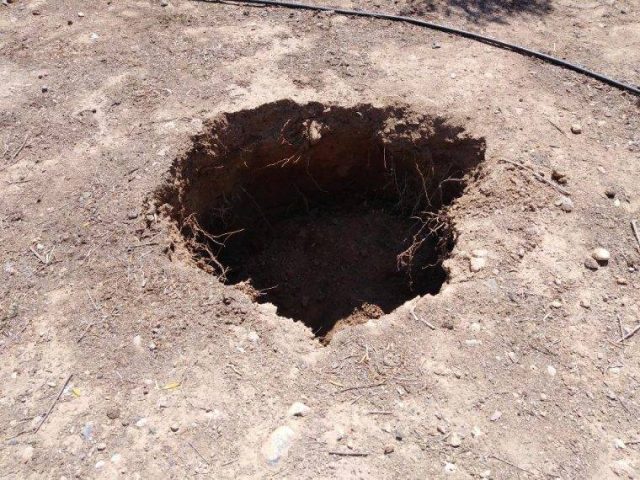 The hole in the ground led to a Minoan Bronze Age tomb. Photo by Greek Ministry of Culture

The farmer called in archaeologists from the local heritage ministry to investigate, and they began excavating what turned out to be an ancient Minoan tomb, carved into the soft limestone, which had been lying hidden for millennia.

Two adult Minoan men had been placed in highly-embossed clay coffins called “larnakes” which were common in Bronze Age Minoan culture. These, in turn, were surrounded by funerary vases which suggest that the men were of high status. 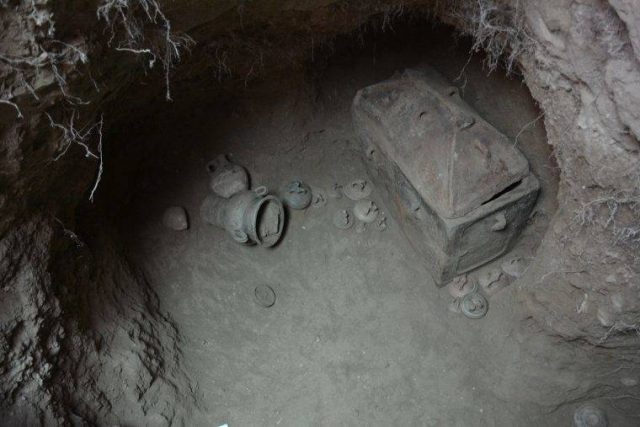 The ancient chamber tomb was entirely intact and undamaged by looters.

The tomb was about 13 feet in length and eight feet deep, divided into three chambers that would have been accessed via a vertical tunnel that was sealed with clay after the tomb’s occupants were laid to rest. One larnax was found in the northernmost chamber, with a number of funerary vessels scattered around it.

The chamber at the southern end of the tomb held the other larnax coffin, along with 14 amphorae and a bowl. The tomb was estimated to be about 3,400 years old, and was preserved in near-perfect condition, making it a valuable find. 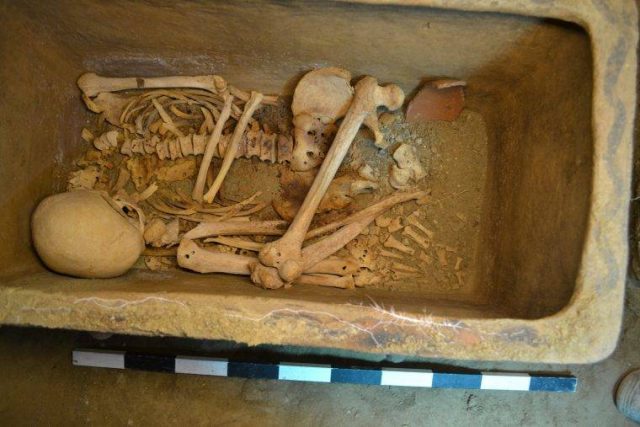 The skeletal remains were found inside two larnakes (singular: “larnax”) – a type of small closed coffin used in the Minoan and Greek Bronze Age. Photo by Greek Ministry of Culture

Kristina Killgrove, a bioarchaeologist, wrote for Forbes that the ornamentation on the artifacts found in the tomb suggest that its inhabitants were men of wealth. The fanciest tombs from the same period, however, had massive domed walls in a “beehive” style, which this tomb doesn’t, so they probably weren’t among the wealthiest.

The find dates from the Late Minoan Period, sometimes called the Late Palace Period. In the earlier part of that era, Minoan civilization was very rich, with impressive ceramics and art, but by the later part of the period there is an apparent decline in wealth and prestige, according to Killgrove.

It’s believed that the civilization was weakened by a combination of natural disasters, including a tsunami triggered by an earthquake, and the eruption of a nearby volcano. This made it easier for foreigners to come in and destroy the palaces. 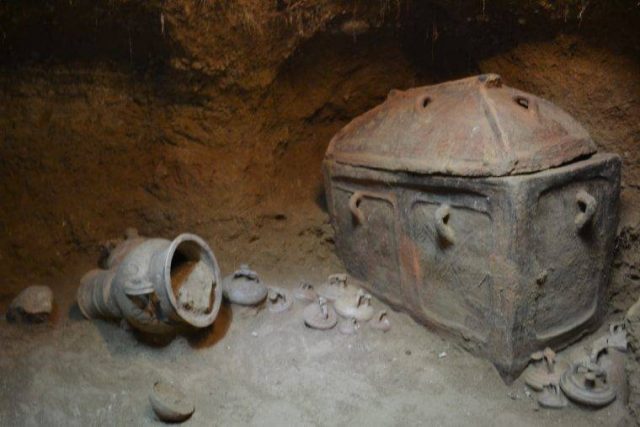 The ornate pottery vessels found inside the tomb were all in good condition. Photo by Greek Ministry of Culture

Locals don’t anticipate the discovery of any more tombs of this type, but the area is known to be the home of a number of antiquities, and a great deal of them have been found by coincidence, as with this find.

The Deputy Mayor of Local Communities, Agrarian and Tourism of Ierapetra pointed out that the tomb had never been found by thieves, and went on to say that it would probably have remained undiscovered forever, except for the broken irrigation pipe that was responsible for the softened and eroded soil in the farmer’s olive grove. 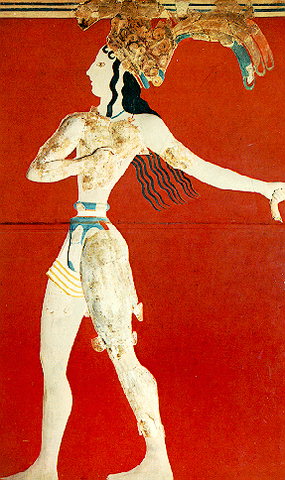 Minoan fresco commonly known as the ‘Prince of the Lilies.’

He went on to say how pleased they were with having the tomb to further enrich their understanding of their ancient culture and history, and that the tomb was proof for those historians who didn’t think that there had been Minoans in that part of Crete.

Previously, it had been thought that the Minoans only settled in the lowlands and plains of the island, not in the mountains that surround Ierapetra, although there was an excavation in 2012 that uncovered a Minoan mansion in the same area.

Killgrove will be analyzing the skeletons, to see what further information can be gleaned from them. She said, “As a bioarchaeologist, I routinely pore over the skeletons of ancient populations so that I can learn about their health, diet, and lifestyles.” It’s also hoped that analysis can contribute more information into the research on Minoan and Mycenaean origins.

« 4,000-yr-old Tablet is the World’s Oldest Customer Service Complaint
A Test of Gullibility – One Magician’s Famous Hoax to Draw a Crowd »