Following the unusually hot, dry summer, the water levels in a reservoir in Derbyshire, England, have recently dropped low enough to reveal two drowned villages. Winter rains have arrived, but it will take some time before the waters rise to reclaim the long-abandoned ruins.

Ladybower Reservoir is located where the villages of Derwent and Ashopton used to be, next to where the A57 Snake Pass road that winds through the Pennine Hills once passed through Derwent Valley.

While the name “Derwent” is still in use thanks to the river of the same name, the only places now bearing the name of Ashopton are the viaduct carrying the A57 over the reservoir along with a few cottages and other buildings around the area. 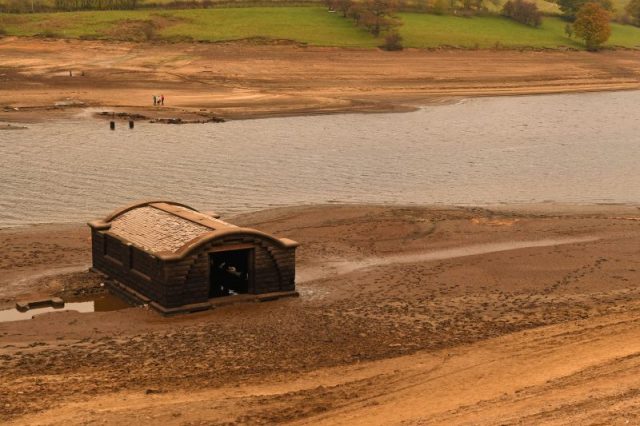 Ladybower reservoir’s low water level has revealed the pump house from Derwent village, flooded to create the reservoir in 1943, in the Upper Derwent Valley in Derbyshire, northern England on November 6, 2018. The reservoir’s water level is particularly low after the dry hot summer in the UK. Photo credit PAUL ELLIS/AFP/Getty Images

The Ladybower reservoir was constructed between 1935 and 1943. The reservoirs of Howden and Derwent had supplied Derby, Sheffield, Nottingham, and Leicester with water up until that point, but the populations were growing and a new reservoir was needed.

Ashopton used to have 100 inhabitants and was larger than Derwent, which started out as a hamlet. But in 1867, Derwent’s local chapel was replaced by a steepled church, and it was upgraded to a village. This meant it was able to have a graveyard in which the parishioners could be buried. 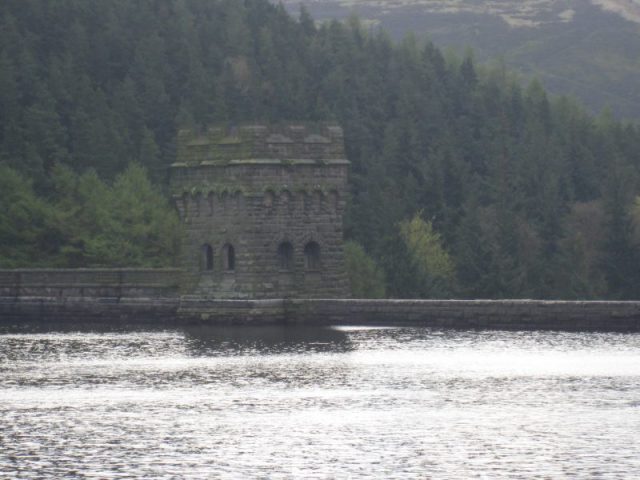 However, this provided its own problems when the village was due to be flooded because all the bodies within Derwent graveyard had to be transported to the nearby Bamford church graveyard instead.

By 1943, the residents of both villages had been moved on and most of the buildings in Derwent and Ashopton had been demolished. The valley was empty and the reservoir was ready to be filled.

Ashopton and Derwent aren’t the only places to have vanished from that area. While the dam was being constructed, Derwent Valley Waterboard built Birchinlee village. This was a temporary village, designed to house those who were working on the dam, as well as their families. 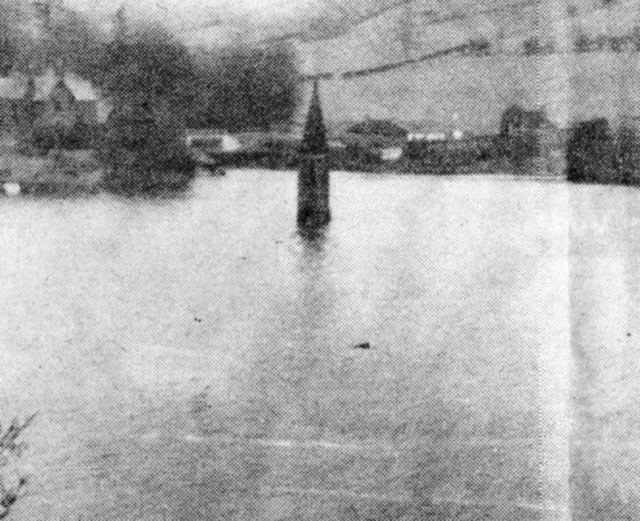 The church tower of Derwent slowly disappearing below the water as the reservoir was filled in 1946. Photo by Rcsprinter123 CC BY 3.0

The temporary village was nicknamed Tin Town because it was made of easily dismantled iron and wooden buildings. Despite its temporary nature, it had everything that the workers and their families might need: a hospital, school, shops, a pub, even a police station and a railway station. Dances and other events were often held at the recreation hall which boasted two billiard tables as well as a library.

The layout of Birchinlee was carefully thought out, with the foremen and many of the families having accommodation which was separate from that of the single workers. Information signs at the site even report that there was a type of “suburb” for village officers. 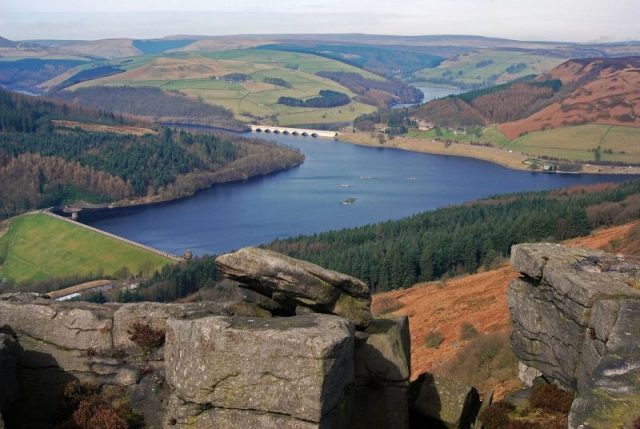 When construction was completed, the workers were sent away and the temporary village was dismantled. The railway track is now a footpath.

The reservoir was officially opened by King George VI on September 25, 1945. However, it still took two years to fill it completely. One can only imagine what an eerie sight it must have been to see the ruins of a well-known and recently inhabited place slowly disappearing under the water.

The spire of Derwent parish church was the last thing to disappear since the church tower was left standing while the rest of the building was demolished. Pictures exist of the church tower jutting out of the water. 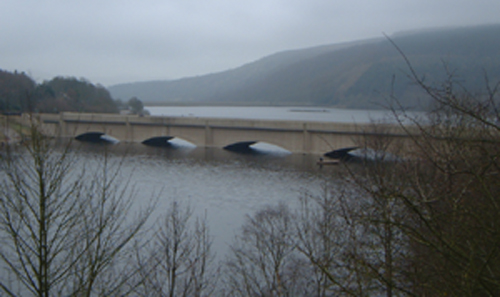 The Ladybower Viaduct which carries the A6013 road to Bamford pictured in 2005. Photo by Mick Knapton CC BY-SA 3.0

For a while, even when fully submerged, the very tip of the spire would appear again when the water levels were getting low. However, it was demolished in 1947 for safety reasons.

The Methodist Chapel at Ashopton will never re-emerge as it was fully demolished along with most other buildings.

According to Silent Valley: The Story of the Lost Derbyshire Villages of Derwent and Ashopton by Vic Hallam, the final church service took place on September 25, 1939 and the last song sung was “The Day’s Dying in the West.” 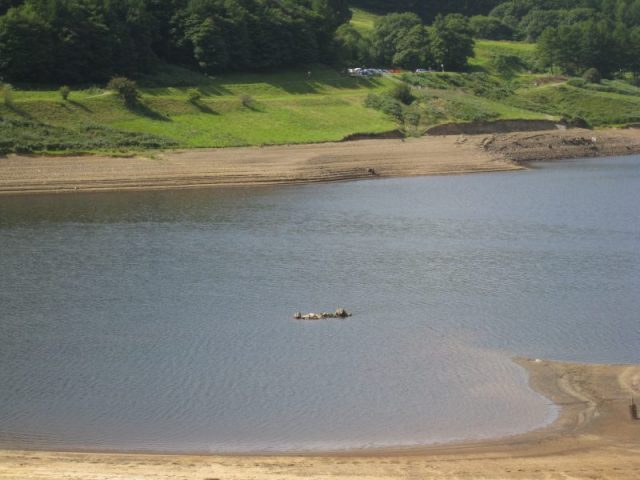 During the Second World War, RAF 617  Squadron practiced on its sister reservoir – the Derwent Reservoir for Operation Chastise, otherwise known as the “Dam Busters Raid.”

The Operation, which began on May 17, 1943, involved the Squadron using the “bouncing bomb” to take out the Möhne and Edersee dams in Germany. The bomb was the creation of Barnes Wallis and was so revolutionary that multiple tests were carried out at various sites (including the Ladybower Reservoir) to see how the concept worked in practice. 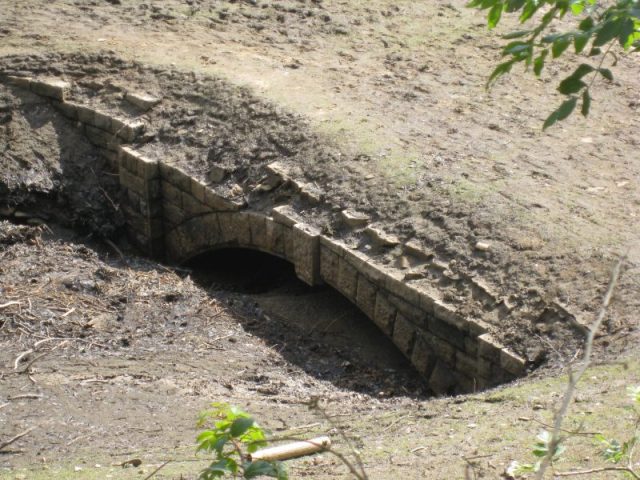 It is rare that the water level at Ladybower gets low enough for the buildings to be exposed. The BBC reported that the last time this happened was in 1995, and before that in 1976, according to Dave Aston of the Peak District’s Upper Derwent Visitor Centre. However, glimpses of the lost village have also been noted in 1989 and 2003.

The remains have enticed visitors to walk across the dried-up reservoir bed to have a closer look. However, the Edale Mountain Rescue Team urged people to view the village from solid ground after a man got stuck in the thick mud.

On their Facebook page, the Rescue Team reported that it took approximately 30 minutes of digging with “specialist equipment designed to spread an individual’s weight over a muddy surface” to get the man back to safety.

Read another story from us: The Red House – Italy’s Most Haunted Villa Which Lies Abandoned and Off Limits

They warned people to view the remains from solid, dry ground, emphasizing that this rescue “was just the most recent in a number of similar incidents this week.”

« The Troubled Love Story of a Famed Artist and the Life-Sized Doll of his Ex-Girlfriend
Don’t Look Down! Harrowing Photos of Early High-Rise Workers Way Up in the Sky »