Ned Kelly was an Australian outlaw, and although the Aussies know him as their version of Robin Hood, he was, first and foremost, a criminal.

Whether true or not, the criminal tale of Ned Kelly is a folktale in Australia, and here’s what we know.

Ned Kelly’s profile as an outlaw appeared before he even started his journey into the world of crime. 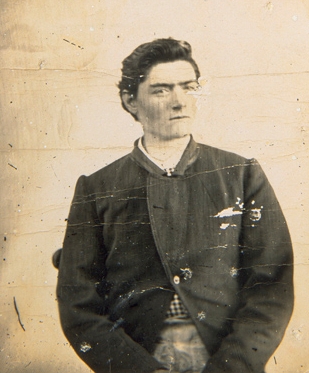 His father, John Kelly was an Irishman who was convicted of stealing two pigs in his homeland and transported to Tasmania. He later settled at a small farm in the north of Melbourne where Ned and his siblings grew up.

After the gold rush, John Kelly made a living off cattle theft for a while, before being imprisoned and sentenced to hard labor — which affected his health and caused his death soon after being released in 1866. 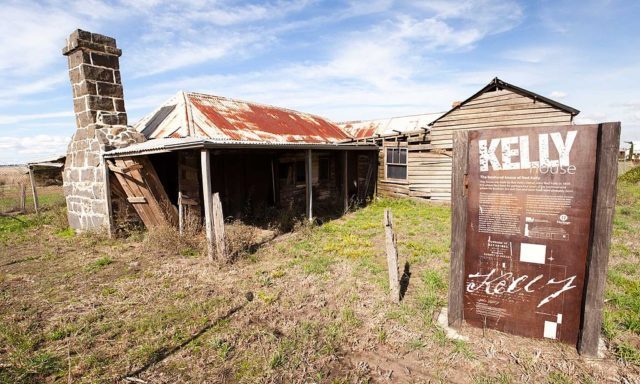 Kelly House at Beveridge. Photo by David.moreno72 CC BY SA 3.0

Living in the Australian countryside, Ned was a capable tracker and an excellent swimmer, but his childhood was far from pastoral and idyllic.

Due to his father’s charge sheet, Ned was often targeted as a usual suspect for any crime, even before he became a criminal. 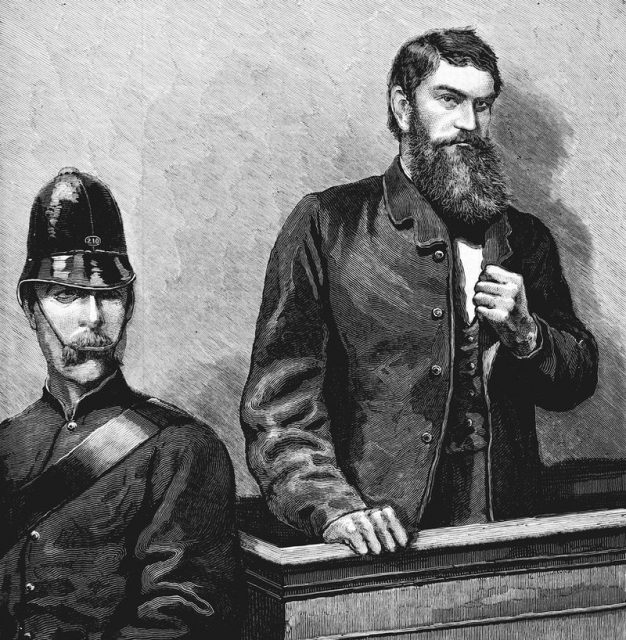 Ned Kelly in the dock.

In 1869, when he was 14, Ned was accused of robbing Ah Fook, a Chinese merchant. The complainant claimed that Kelly jumped him with a bamboo stick and robbed him of 10 shillings. Kelly’s version of the story, supported by his sister and two other witnesses, was that Fook attacked him and he ran away.

The most likely truth is that neither version of the story is true — probably Fook attacked Kelly, while Kelly responded twice as hard. There was no legal action against the boy but the incident marked him as a troublemaker. 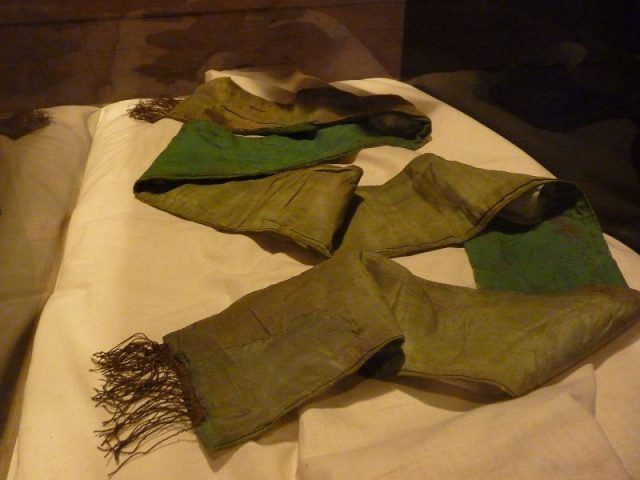 At age 11, Kelly saved a young boy from drowning in a creek and was awarded this green sash in recognition of his bravery. Kelly wore the sash under his armour during his last stand at Glenrowan. It remains stained with his blood, on display at Benalla Museum. Photo by bronzebrew CC BY 2.0

Eventually, the two of them got arrested and served a short term in prison. Upon release, Kelly continued his criminal career. 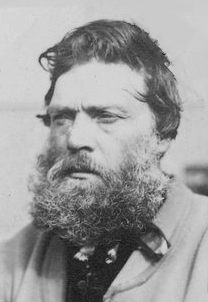 Harry Power has been described as Kelly’s bushranging mentor.

Although he was often guilty of the crimes he was accused of, sometimes they were false. For example, once, Isaiah “Wild” Wright, another petty criminal, gave Kelly a stolen mare.

When the police found out the mare, a fight broke out as Kelly tried to prove his innocence. It ended up with Kelly shooting the police officer. He was sentenced to three years in prison. 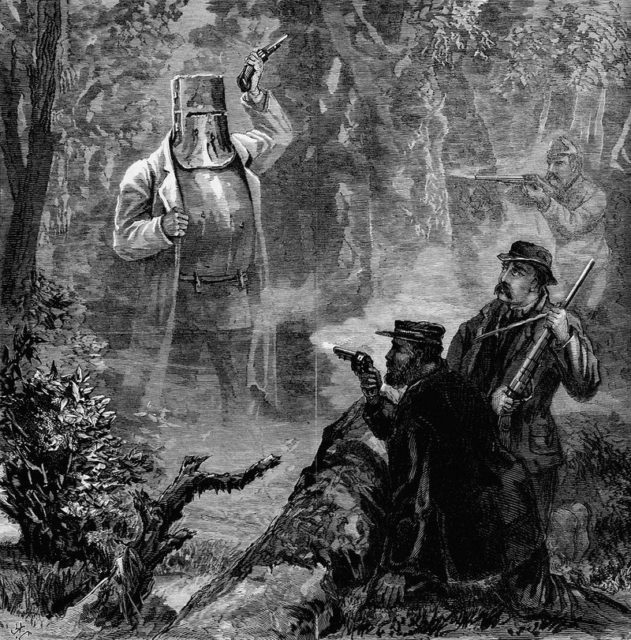 “A strange apparition”: when Kelly appeared out of the mist-shrouded bush, clad in armour, bewildered policemen took him to be a ghost.

Upon being released, Kelly challenged Wild Wright to a bare-knuckle boxing match which lasted for 20 rounds and ended with Kelly’s victory.

Ned’s brother joined him in his war against law enforcement and together with two other friends, Steve Hart and Joe Byrne, they formed the Kelly’s Gang.

In 1878, Constable Alexander Fitzpatrick came to Kelly’s house and attempted to arrest Ned’s brother for horse theft. Ned shot the Constable in the left arm and he quickly lost consciousness. He woke up in unbearable pain as Ned was trying to remove the bullet from his arm with a knife so that it won’t be used as an evidence against him. 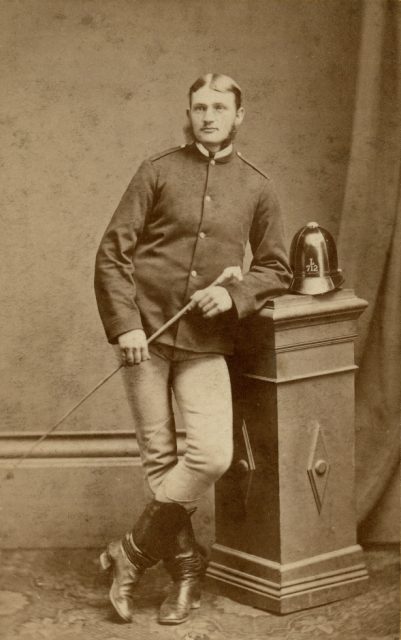 Frequently involved in robberies and shootings, the Kelly Gang was constantly on the run, hiding in the bush. In 1879, Ned published a 56-page document known as the “Jerilderie Letter” where he justified his actions and identified his struggle with that of the oppressed Irish Catholic and poor of Victoria.

Just to illustrate Kelly’s notoriety, the reward for his head was £8,000 (roughly A$1.5 million today). 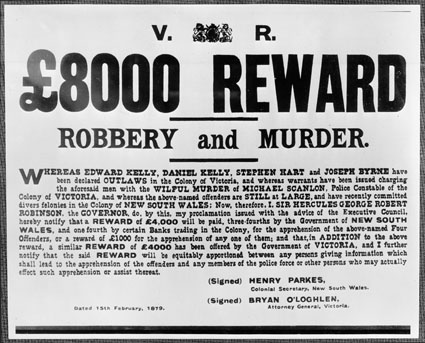 £8000 reward notice for the capture of the Kelly Gang, equivalent to $1.5 million in modern Australian currency.

That was when a great chase for the gang began by the police. In fact, the two were preparing for a war.

To protect themselves, the members of the gang created a special body armor weighing some 97 pounds. 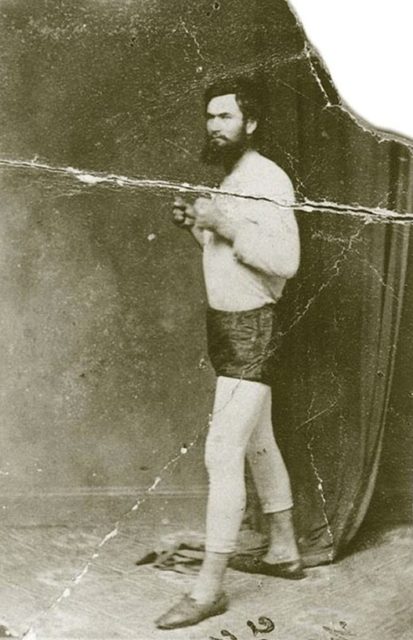 Kelly after defeating Isaiah “Wild” Wright in a 20-round bare-knuckle boxing match, August 1874.

Anticipating a great battle for his capture, Kelly and his gang took over the small town of Glenrowan, where they forced local railroad workers to destroy the tracks near the town.

They took the 62 inhabitants of Glenrowan and kept them hostage in the town’s hotel where they let them drink and play games. But one of them managed to inform the police who arrived in Glenrowan and surrounded the hotel. 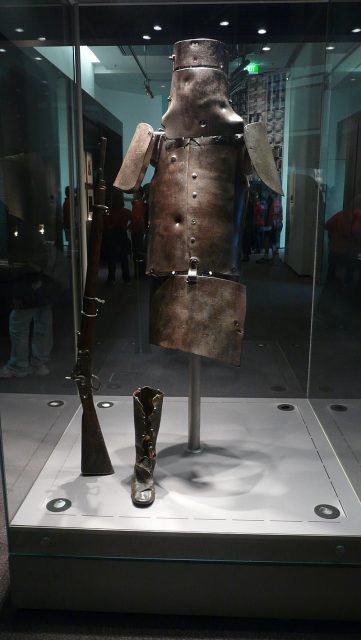 Kelly’s armour on display in the State Library of Victoria. The helmet, breastplate, backplate and shoulder plates show a total of 18 bullet marks. Also on display are Kelly’s Snider Enfield rifle and one of his boots. Photo by Chensiyuan CC BY SA 4.0

On June 28, 1880, Kelly, dressed in his newly designed armor, snuck behind the lines of police and started firing. Kelly moved calmly, firing from two pistols, while the police were amazed by him not falling down from their shots. 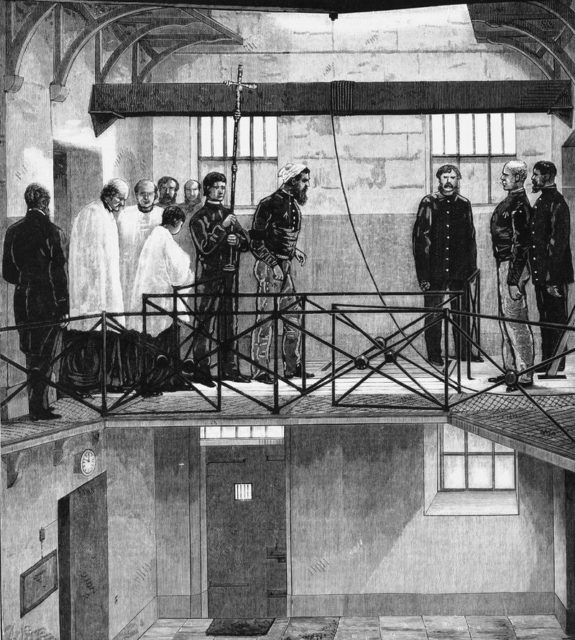 Kelly goes to the scaffold.

Kelly managed to injure many officers before they finally realized that his legs weren’t protected by the armor and shot him until he was unable to move. They kept him alive and killed all the other members of his gang.

Kelly was tried and hanged four months later, on November 11th. Apparently, he was calm and at peace with himself and his last words were “Such is life.”

Read another story from us: The Ultimate Rocket Scientist who went Mad with Sex and the Occult

The stories about Ned Kelly were told from generation to generation until he became a folk hero for many oppressed rural families in Australia who had little rights to land and lived in poverty. In some of the stories, 30,000 people signed a petition for a commutation of his sentence.