The Saint Behind Santa Claus – Unwrapping the Real St. Nicholas

The history of Santa Claus some say begins with a Saint. December 6th is the feast day of Saint Nicholas, a figure recognized as one of the many inspirations for Santa Claus. But the real saint is very different from the jolly old man we know. For a start, he is often named as the patron saint of merchants, bankers, sailors, small children, and prostitutes. Nicholas was born on March 15, 270 in Patara, Lycia in the Roman Empire to very wealthy parents.

Detail of a late medieval Greek Orthodox icon showing Saint Nicholas slapping Arius at the First Council of Nicaea, a famous incident whose historicity is disputed.

When Nicholas was only eighteen years old, his parents died and he inherited their fortune. However, he didn’t luxuriate in that money but tried to distribute it to the poor.

Nicholas was a devout Christian. He knew that to gain entry to Heaven, he needed to do good on Earth without reward or recognition. As such, he would often give his money away anonymously.

This attitude towards generosity gave rise to a story which many of us will identify as being a source for the modern day interpretation of Santa Claus. However, it is also this story which sets Saint Nicholas up as the patron saint of prostitutes. 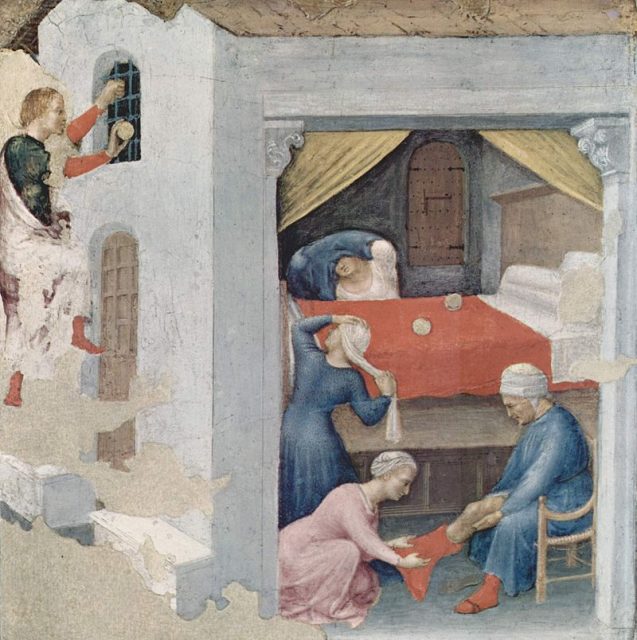 Nicholas heard tales of an honest man who had fallen into poverty. He had three daughters but with no money, he had no dowry to offer any suitors to marry them.

Given the times they lived in, poor and unmarried women would often be sold by their fathers into slavery or prostitution.

However, Nicholas was moved to help this family. One night, he strolled past their house and threw a bag of coins through the window. There was enough money for a dowry, and the father was delighted. He married off his eldest daughter very handsomely. 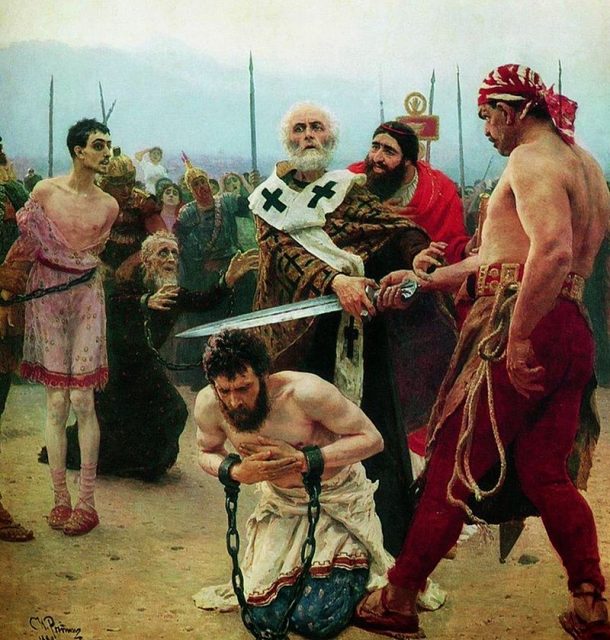 While it was good news for the eldest daughter, there were still the two other daughters to care for. The man’s poverty was unabated, and he faced having to sell his second daughter. The night before the sale was due to take place, Nicholas again threw in a bag of coins which enabled the second daughter to get married.

The poor man was determined to identify and thank his benefactor. So, the night before his third daughter was to be sold off, he waited up for and accosted Nicholas when he threw in the final purse.

The father fell to his knees and thanked Nicholas for his generosity. Nicholas would take nothing in return except the father’s solemn assurance that he would never reveal Nicholas as the mysterious benefactor.

Over the years, this story has been embellished and details have been added that tie Saint Nicholas to traditional Christmas customs. For example, in one version the money lands in a shoe, explaining the tradition in Holland of leaving out a shoe for “Sinterklaas” rather than a stocking. 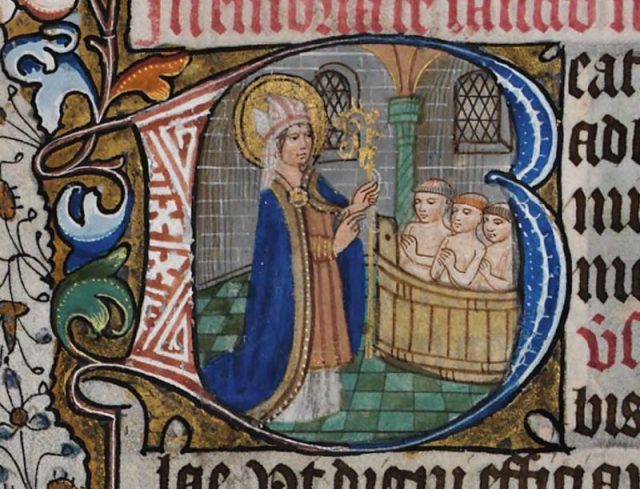 In another version, the father shut the window, hoping that the benefactor would be obliged to knock on the door, but Nicholas merely threw the coins down the chimney instead – starting an association between Saint Nicholas, chimneys, and gifts which persists to this day in our own culture.

Other tales are told about the saint, linking him with other poor unfortunates who then went on to claim him as their protector.

In one story, he was on a ship when a terrible storm hit. However, he rebuked the waves and shamed them into being calm. From then on, he was the patron saint of sailors. 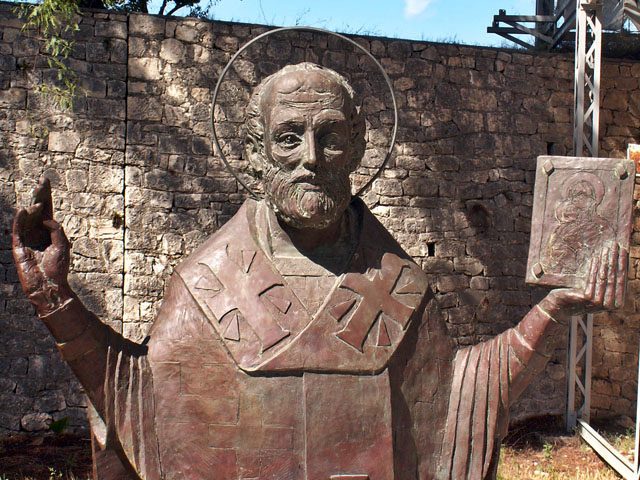 Russian Orthodox statue of Saint Nicolas, now in a corner near the church in Demre.

As well as the protector of young girls, he also became the patron saint of young boys after a resurrection miracle was attributed to him.

The stories differ as to whether the boys’ murderer was a butcher, a greedy innkeeper, or a shopkeeper who merely hated children. In any event, this odious man killed three young boys, stole their money, dismembered them and hid them in pickling barrels.

Nicholas heard of the incident. He visited the scene of the crime and prayed intensely to God who heard his prayers and brought the three boys back to life. 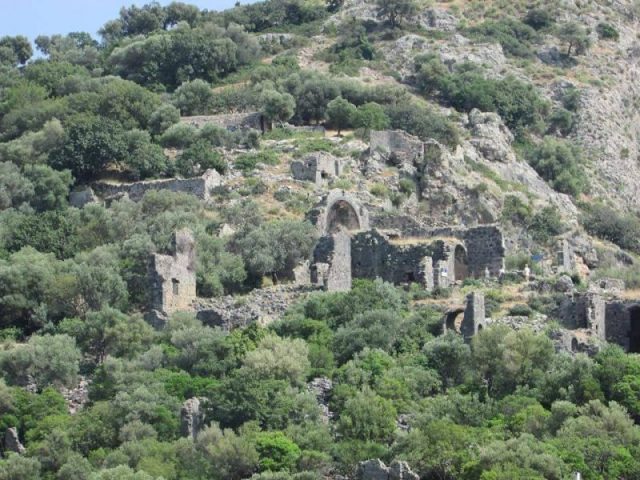 Ruins of the 4th century church on the island of Gemile where some scholars believe Saint Nicholas was originally entombed.

When he was Bishop of Myra, Nicholas is also said to have intervened in the execution of three men. He declared the men were innocent and that one of the jurors who had convicted them had received a bribe.

Because of this story, and due to his famously generous spirit as well as his trustworthiness, he became the patron saint of pawnbrokers, bankers, and money lenders.

Samuel Littlewood in his book The Story of Santa Claus links Nicholas’ trustworthiness and his patronage of children with a theory that when small children cry “Nix!” to call a playground truce, they are calling on this very saint to protect them and ensure that their agreement is honored.

In 1087, some sailors from the city of Bari took Nicholas’s bones from Myra and brought them back to their own land, arriving in port on May 9th. As a result, Nicholas was given two saint’s days: May 9th and December 6th.

However, a rather quaint old Russian tale provides an alternative reason for his dual celebrations. Saint Cassian was walking down a road when he came across a peasant whose cart was stuck in the mud. Cassian refused to help because it would sully his saint’s robes. Later on, Nicholas passed by and he helped the carter, becoming covered in mud as a result. 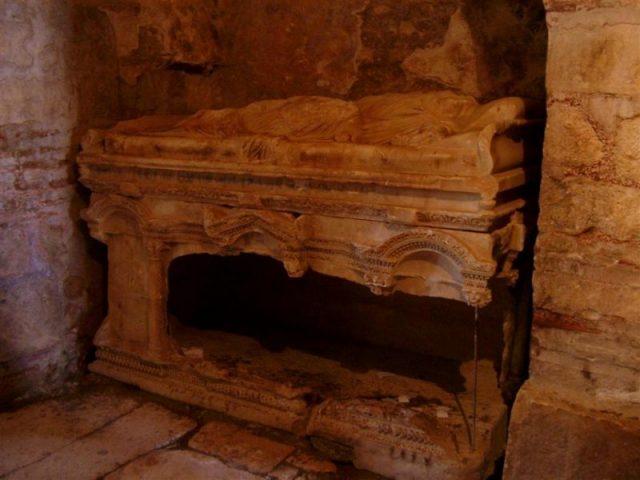 Photograph of the desecrated sarcophagus in the St. Nicholas Church, Demre, where Saint Nicholas’s bones were kept before they were removed and taken to Bari in 1087. Photo by Sjoehest CC BY-SA 3.0

When the two saints came back to heaven, Cassian assured God that he’d acted responsibly and had not soiled his heavenly clothes while walking the earth. Nicholas admitted that he had done the opposite, but God was so pleased with Nicholas’s actions that he decreed the saint should have two days honoring him.

In contrast, God decreed that Cassian should have only one day in his honor – that being February 29th (meaning his day comes round only once every four years).

While there are many tales told about Santa Claus and his generosity – with new ones being made up every year – it should be remembered that Saint Nicholas has just as many tales that deserve to be retold during the festive period.