Secrets of Japan’s Most Beautiful and Haunted Castle

Castles are typically associated with acts of war. Impenetrable fortresses which echo with the sound of battles past, their stones stained with blood. This isn’t the case with Himeji Castle in Japan.

The structure has certainly been involved in its fair share of chaos and political intrigue. Yet this impressively preserved remnant of feudal society represents peace as well as conflict. 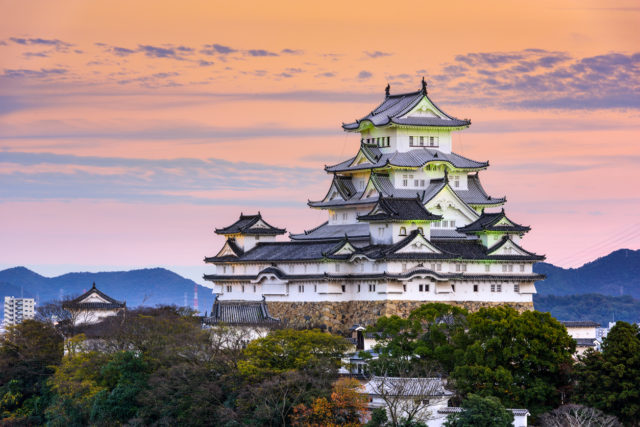 Overlooking the city of Himeji from the vantage point of the Himeyama hilltop, it has dominated the skyline in various forms since 1346.

Other names for it include Shirasagijo, or the “White Egret” castle, due to its dazzling exterior and wing-like architecture. The bird comparison also led to it being called Hakurojo, the “White Heron.”

The castle’s main support comprises a surprisingly simple arrangement, fashioned out of wood. 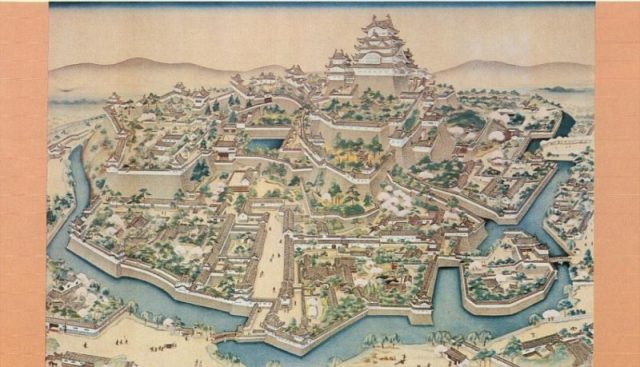 A depiction of the intricate castle complex

A Telegraph piece from 2015 described these main pillars as “a pair of gigantic chopsticks 87ft high, tapering from a diameter of around 38in at their base.” One is made of fir and the other cypress.

Himeji Castle is still standing thanks to these so-called sticks plus “some clever joinery and a lick of plaster,” though a lot of work has been done on the property over the centuries. As might be expected, it is classed as a World Heritage site. 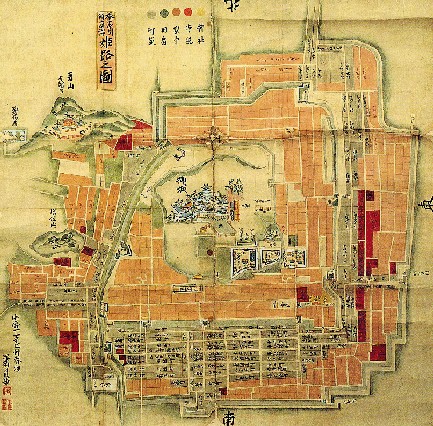 A 1761 depiction of the castle complex

The fact it stands at all is a historic miracle. Amazingly the castle has survived not only the bombing of Himeji during World War II (it was seen as a key strategic location by the Americans) but also a major natural disaster, the Great Hanshin earthquake of 1995.

When building commenced on the hill in 1333, it was actually for a fort which wound up being demolished 13 years later. The beginnings of the castle were the brainchild of Akamatsu Sadanori, son of Akamatsu Norimura, samurai and governor of Harima Province. Himeji is found in the middle of this Province. 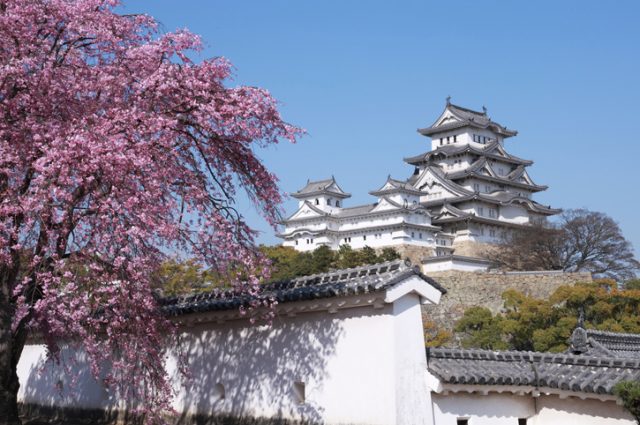 Himeji Castle in the spring of 2009

Over the next couple of centuries, the place saw some changes, not only in people but also structure. At first it was named Himeyama Castle, which was changed to Himeji Castle during the rule of Kuroda Shigetaka in the mid-16th century.

He remodeled the site, but it was only the tip of the iceberg when it came to home improvements. A keep was erected, then knocked down. The early 17th century saw the area developed into a complex resembling what tourists see today. 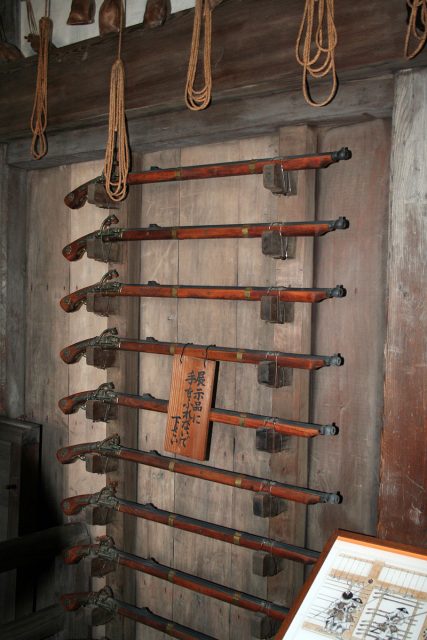 Weapon racks inside the keep Photo by Corpse Reviver CC BY 3.0

This was the idea of Ikeda Terumasa, who had three moats added, amongst other developments. His father in law, Tokugawa Ieyasu, was the previous owner and a renowned warrior-statesman.

He viewed Himeji Castle as a formidable symbol that would deter violence rather than encourage it. Ieyasu was considered a great unifying force in Japanese culture. 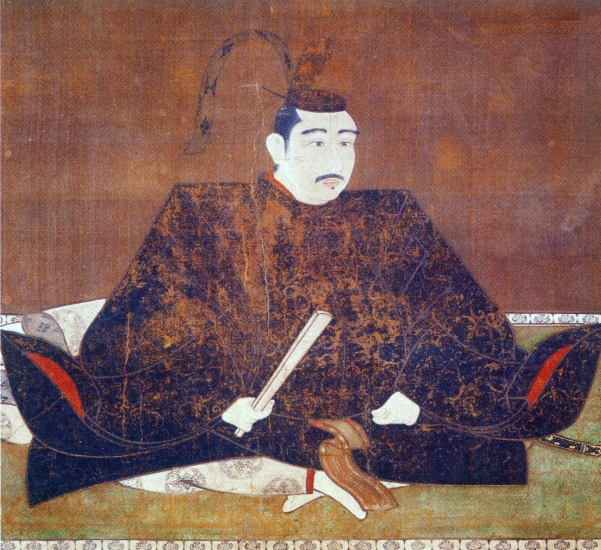 In a CNN interview from 2018, Dr. Jennifer Mitchelhill (author of Samurai Castles) explained that “the samurai were not just warriors. They were also castle-builders, politicians and local leaders with a great aesthetic sense.”

Ieyasu gave Himeji Castle to Ikeda Terumasa as thanks for his help during the recently-concluded Battle of Sekigahara. The structure became an intricate series of over 80 buildings designed to confuse invaders. 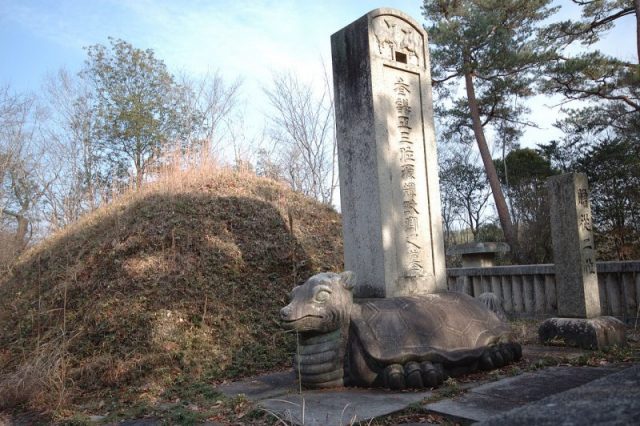 Grave of Ikeda Terumasa Photo by Reggaeman CC BY SA 3.0

Visitors to the castle face a challenge navigating the complex, and have to follow floor markers so they don’t get lost.

A tour guide is quoted as saying, “The layout is ingenious, with spiralling paths, blind corners, hidden hatches and “trick” gates which could be entirely blocked with rubble within seconds.”

Another unusual feature of castle defences was the policy of pouring boiling water on an enemy instead of oil. This was to avoid staining the plaster work. 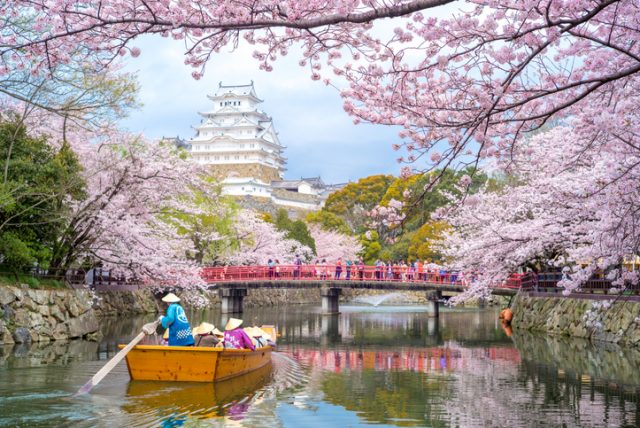 Himeji Castle isn’t a typical tourist attraction. According to the Telegraph “the ninja spirit of concealment and stealth is evoked in the design of the castle itself.” A troop of ninja even lived in the grounds.

Despite these intimidating details, the most famous battle fought at Himeji was a fictional one. The 1967 James Bond film You Only Live Twice used the castle as the setting for Sean Connery’s ninja training sequences. 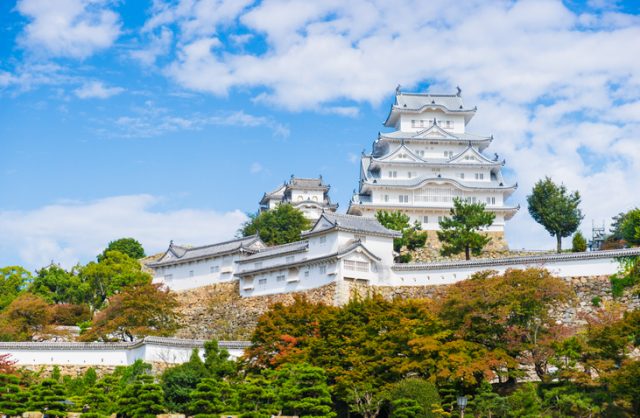 Himeji, Japan – October 24th, 2014: Autumn had arrived to Himeji-jo Castle. Himeji Castle is a hilltop Japanese castle complex located in Himeji, in Hy?go Prefecture, Japan. The castle is regarded as the finest surviving example of prototypical Japanese castle architecture, comprising a network of 83 buildings with advanced defensive systems from the feudal period.

Like any ancient building, Himeji Castle has its ghosts. It’s famous for inspiring one of the most frightening horror movies of recent years, The Ring (Ringu), via its tale of a spurned samurai and his brutal revenge on the object of his affection.

Tessan Aoyama was the woo’ing warrior, with his sights set on servant Okiku. However when she rejected him he devised a fiendish scheme to force her into a union. 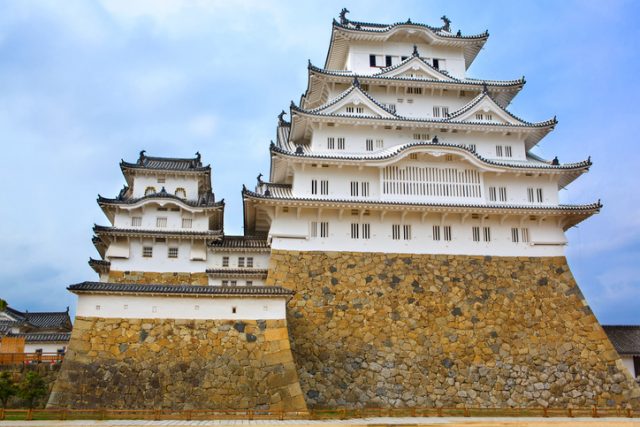 A 2017 article on the horror website Bloody Disgusting tells that “One of Okiku’s primary duties was to look after ten highly valuable golden plates that were owned by Aoyama, and one day, the samurai decided to hide one of them. He told Okiku that if she didn’t agree to be with him, he would blame her for stealing the plate, which would lead to her torture and execution.”

A charming character indeed! When that plan failed he killed her by throwing her down a well. This can be found outside the castle and is known as “Okiku’s Well.” Her ghost was said to emerge on all fours out of the well to torment Aoyama, who then lost his mind.

From this, the iconic black-haired Sadako/Samara was born to a terrified moviegoing public.

Himeji Castle has stood for hundreds of years, withstanding not only the test of time but the ravages of history.

Read another story from us: Ancient Italian ‘Castle in the Sky’ in Breathtaking Location Now Available to Rent

It remains a popular destination for culture buffs and ghost hunters alike. Will it still be there in another few centuries? On this evidence, the signs are highly encouraging.