Few embody the concept of “so bad it’s good” better than Ed Wood. The legendarily awful director entered movie history with his combination of ineptitude and pluck.

He was admired and criticized in equal measure. As Mental Floss put it in 2010, “What he lacked in filmmaking acumen he more than made up for in confidence, focus and panache.”

Add to those qualities an ability to surprise. With that in mind, here some of the more fantastic facts about Edward D. Wood Jr…

Plan 9 was ahead of its time! 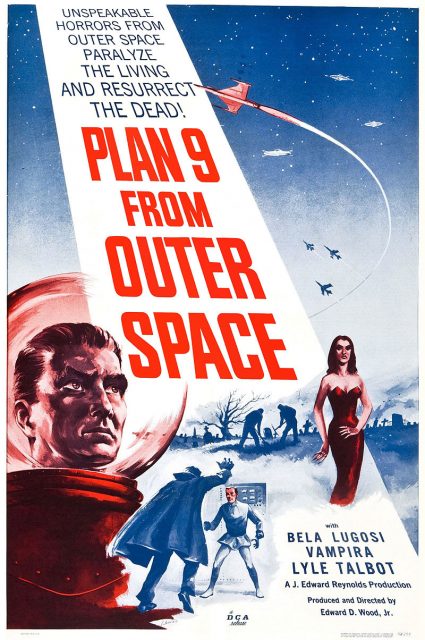 Wood’s best-known offering is 1959’s Plan 9 From Outer Space, an alien invasion picture like no other. The clumsy B movie thrills made Wood’s name, albeit 2 years after his death when the film was seized upon in the book The Golden Turkey Awards (1980) by Harry and Michael Medved.

It was typical of Wood’s output. Biography.com wrote that his films were “celebrated today for their many obvious errors, cheap special effects, strange dialogue, miscasting, and crazy plots.” 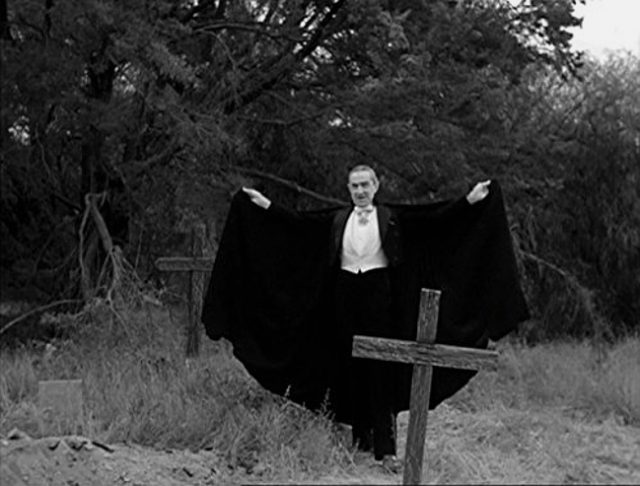 Bela Lugosi, in silent footage for the abandoned The Vampire’s Tomb, which was later recycled for Plan 9 from Outer Space.

However the movie also contained some edgy “anti-statist” content, which made it quite forward thinking. Wood’s characters opposed the state due to government cover ups of UFOs.

At the time this was an unusual concept. So while Plan 9 is wacky, it did have a subversive sensibility. 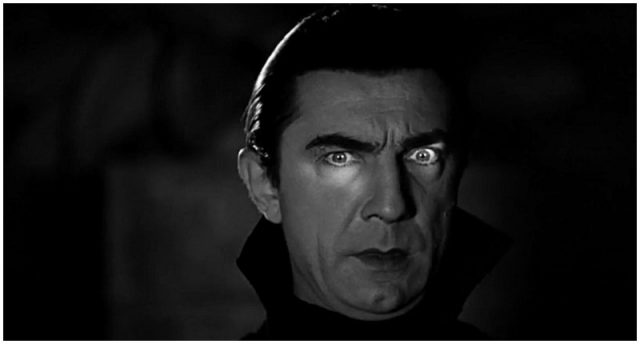 Wood’s story was launched on a global stage thanks to director Tim Burton, who made Ed Wood starring Johnny Depp in 1994. A major part of the film was the “father-son” relationship between its subject and veteran horror movie star Bela Lugosi (played by Martin Landau).

In a less flattering observation, the Washington Post wrote that “Lugosi helped Wood sucker backers into financing his disasters, and Wood gave Lugosi a reason to live — plus a little cash to buy more dope.” 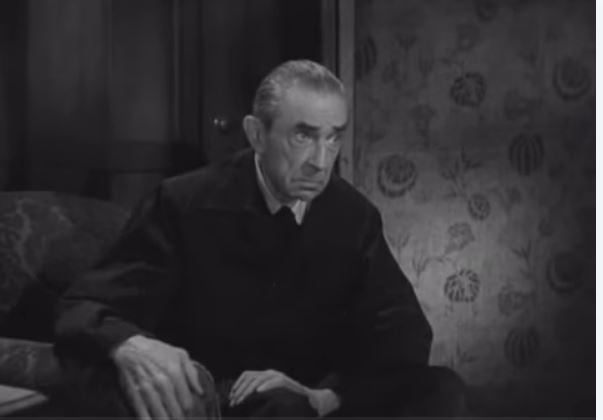 Lugosi appeared in Wood’s Bride of The Monster (1955) and also put in an appearance during Plan 9. That performance was a posthumous one, created from footage shot for uncompleted projects such as The Vampire’s Tomb.

To “flesh out,” so to speak, the role of “Ghoul Man” Wood hired Tom Mason, a chiropractor whose resemblance to Lugosi was far from uncanny. The solution was to have Mason stoop a bit and hold Lugosi’s infamous vampiric cape across his face.

It was a bizarre way to paper over the cracks, yet added to the movie’s uniquely substandard charm.

He wore women’s underwear in combat 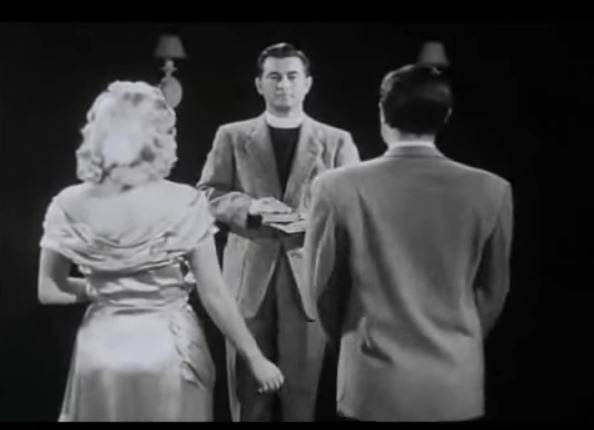 Glen or Glenda, Wood’s 1953 take on cross-dressing and gender issues, was reviled for its then-highly controversial subject matter as much as the shoddy production values. The film was a deeply personal one for the director, who enjoyed wearing women’s clothes.

The roots of this apparently lay in his upbringing. As mentioned by Biography.com, Wood’s mother Lillian “always wanted a girl and until Ed, Jr. was 12-years-old she dressed him in girls’ clothing.” 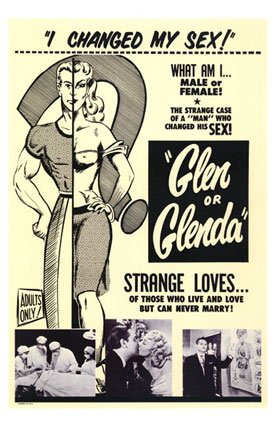 Poster for Glen or Glenda

According to the man himself, he even went as far as wearing ladies’ underwear whilst on active service as a Marine in the Pacific.

That detail appeared in Rudolph Grey’s Wood biography Nightmare of Ecstasy (1992), a key reference for Tim Burton when planning his film.

The 2017 book A Critical Companion to Tim Burton by Adam Barkman and Antonio Sanna cast doubt on this assertion, branding it “totally implausible.” The “personal intimacy of combat… precludes any possibility of concealing so volatile a secret.”

Whether true or not, Glen or Glenda became Wood’s heartfelt statement on a nature that many in his country thought beyond the pale.

There’s a Church of Ed Wood 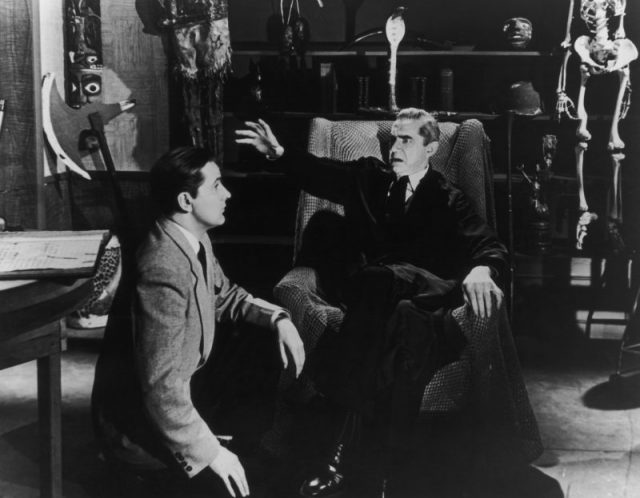 Arguably the ultimate tribute to Wood comes in the form of religious worship! Founded in 1996 by the Rev Steve Galindo, The Church of Ed Wood sees the horrific helmer’s time on Earth as instructional to the living of a healthy life.

The Church’s official website writes “We are an internet church that practices the religion known as Woodism… a pop-culture-based religion.” Describing Edward D. Wood Jr. as “a savior,” they “use Ed and his films to inject spirituality into those who get little fulfillment from more mainstream religions like Christianity… We strive for acceptance of others and of the self.”

Their motivations are serious, though like Wood they find joy in what they do, despite the naysayers. The Church reportedly has over 3,000 members.

He died because of a prank 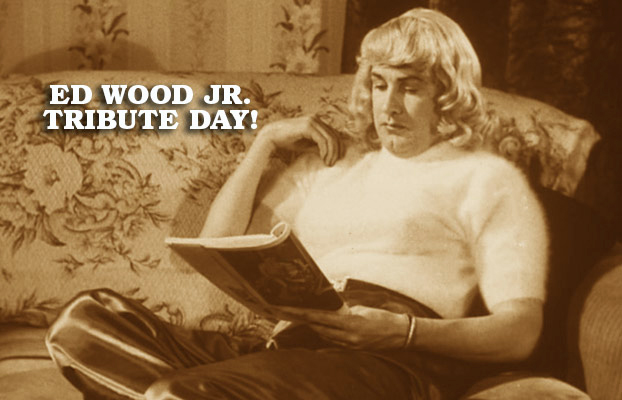 Mental Floss wrote that his love of a good gag proved his undoing. Living in a friend’s apartment with wife Kathy, who he “was known to frequently prank… by pretending to be dying,” he then “suffered a real heart attack… and allegedly yelled for his wife in the next room of their home for more than an hour.”

Believing him to be putting it on she inadvertently left him to his fate. When she did eventually check on him, it was too late. Quoted in A History of X: 100 Years of Sex in Film by Luke Ford (1999) Kathy said, “I’ll never forget the look in his eyes. He clutched at the sheets. It looked like he’d seen hell.”

Read another story from us: Dracula in the Trenches: When Bela Lugosi Served in WWI

It was a tragic end to the life of someone who went on to bring pleasure to millions, though perhaps not in the way he planned.