The Function of this 3,500-yr-old Bronze Hand is Mystifying Archaeologists

Swiss archaeologists have revealed that a bronze hand discovered by treasure hunters in 2017 may be Europe’s oldest bronze sculpture and possibly the world’s first artificial limb, according to National Geographic.

Made of solid bronze, weighing approximately a pound and gilded with gold leaf around the wrist, the hand is a remarkable and unique find. It has left archaeologists puzzling over its possible function.

The hand appears to have had a socket that would have allowed it to be mounted on a pole or stick (or stump), offering tantalizing clues about the use of such artifacts in Bronze Age society. 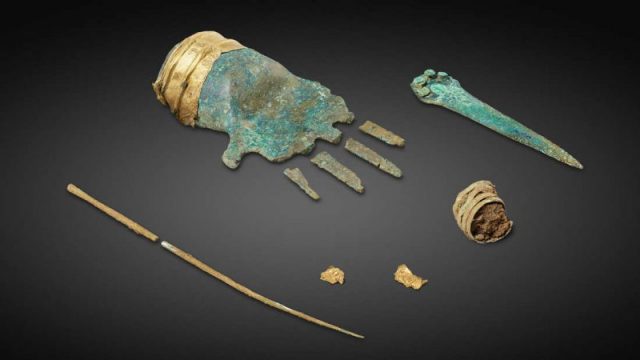 The hand was discovered close to Lake Biel in the Swiss canton of Bern, alongside a dagger and a bronze pin. A group of treasure hunters armed with metal detectors stumbled across the find in October 2017, and immediately alerted local archaeologists.

On the basis of this discovery, a team of archaeologists from the Ancient History and Roman Archaeology Department at the Archaeological Service of the Canton of Bern conducted a dig in the local area, and discovered near the grave of a middle-aged man.

According to National Geographic, the team was able to recover a number of bronze ‘fingers’ that matched those missing from the hand, thereby confirming that it would have originally been buried alongside the man. 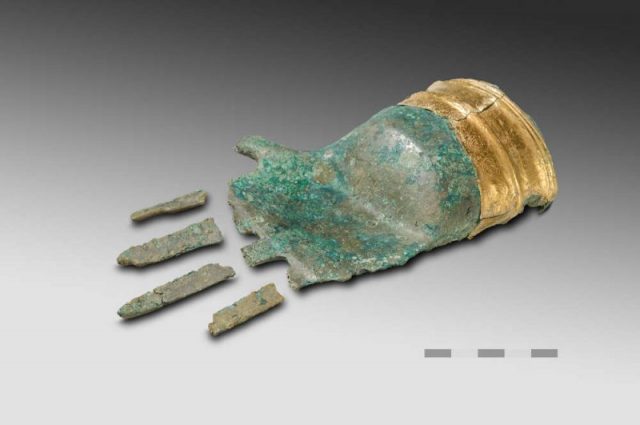 The dig also unearthed a number of other artifacts, including a spiraled hair ornament and several other fragments of gold leaf that matched the samples found on the hand. They also discovered a solid bronze leg bone, raising further speculation about the possible ritual functions that sculptures like this may have had in this period.

In the year since the discovery, a team of archaeologists and scientists has analyzed the finds, in order to confirm their age. Radiocarbon dating techniques used to analyze the adhesive binding the gold plating to the bronze hand have revealed that it is approximately 3,500 years old, dating from between 1400 and 1500 BC.

This would make the hand one of the oldest bronze sculptures in Europe, and certainly the earliest known metal representation of a human body part. 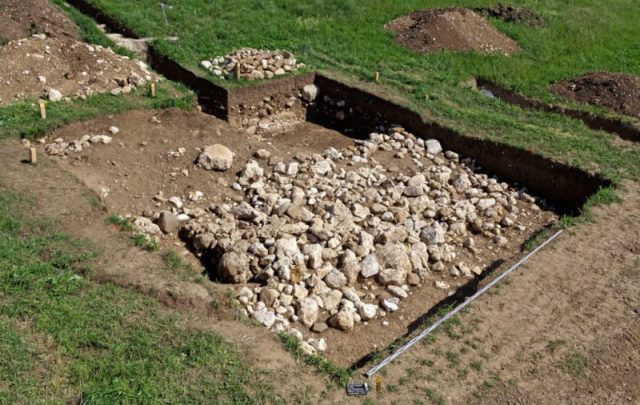 Photo Courtesy Archaeological Service of the Canton of Bern/Guy Jaquenod

The finds are certainly very unusual and unique. According to archaeologist Andrea Schaer, bronze artifacts such as these are rarely found dating from this period, and it is extremely unusual to find Bronze Age gold leaf objects in Switzerland. Although we have discovered thousands of Bronze Age graves in Western Europe, none have contained finds such as these.

Confirmation of the hand’s age has raised further speculation about what it may have been used for and why it was buried alongside this man. It is likely that he would have been a high-ranking individual, and the presence of gold leaf suggests that the hand was a symbol of power.

However, archaeologists working on the finds are currently at a loss to explain exactly how it was used, with some speculating that it could have been used as a prosthetic limb, or for aesthetic or ritual purposes. 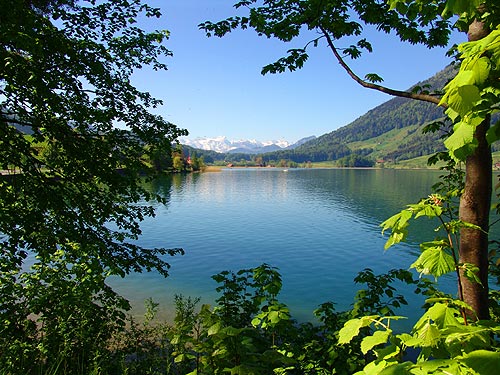 Other suggestions include the idea that it was a child’s toy, or simply part of a decorative statue. However, Stefan Hochuli, head of the department of Monument Preservation and Archaeology in the Swiss canton of Zug, believes that it may have had ritual significance, and could possibility have been used in religious ceremonies.

The grave in which it was originally placed was heavily damaged, and the hand appears to have been moved from its original location, making it very difficult to speculate how it would have been arranged in the grave.

If we can discover more about the possible uses of such an artifact, this hand may offer a revealing glimpse into spiritual practices and beliefs in Bronze Age Switzerland.

Read another story from us: Why Superstitious Thieves Turned Severed Hands Into Candles for Good Luck

One thing, however, is certain: these important and unique finds seem likely to puzzle archaeologists for some time to come.

« Marilyn Monroe and JFK’s Rumored “Tryst” House Up For Sale
What is the Mothman? An Enduring Mystery with Over 100 Sightings »