The very word harem conjures up the seediest fantasies of the wealth, splendor and decadence of Turkey’s Ottoman Empire.

There are cushions everywhere, shimmering curtains, incense breezes past the flickering candles, wine is poured and grapes are peeled, and, of course, seductive young women are stroking the beard of a powerful man old enough to be their father. 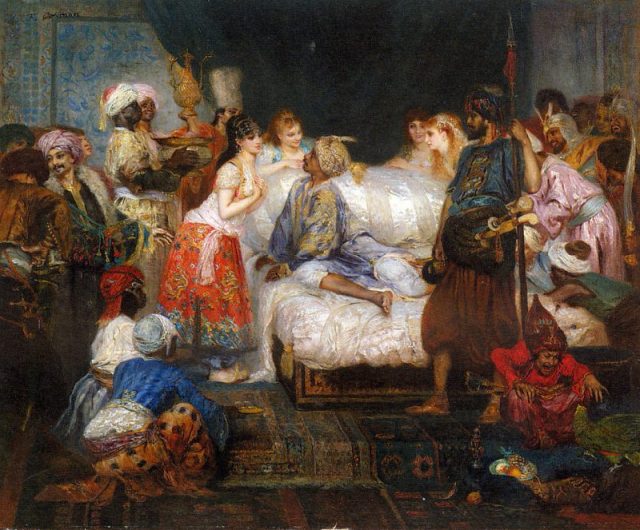 In the 15th and 16th centuries, Istanbul’s grand Topkapi Palace was the main residence of the ruling sultan. Now a museum and popular tourist site, it was then a sprawling complex of luxurious private chambers, grand state rooms, mosques, courtyards, kitchens, a library, a treasury and so much more.

At the heart of the sultan’s own rooms was the harem. Harem comes from the Arabic word haram, meaning a sacred or protected place — not to be confused with the haram pronounced “haraam” with a longer ‘a’ sound, which means forbidden. (It makes more sense in Arabic script) 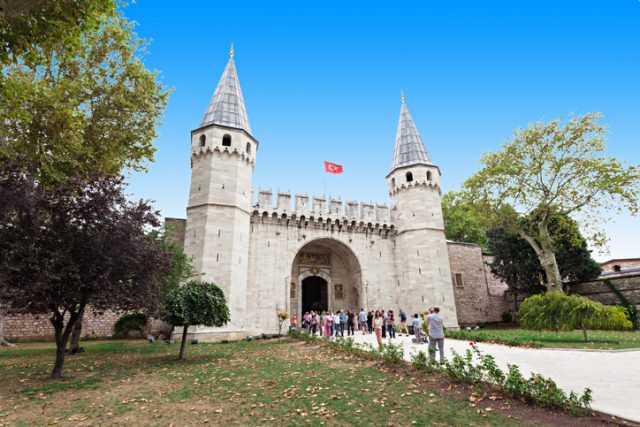 The harem refers to the area of the sultan’s household that belonged to the women. It was a perfectly sealed sanctuary with no view or direct route to the outside, accessible only to those who knew the route. It contained living quarters for the sultan’s mother, his wives, his sisters, his daughters, and the female servants and slaves.

So, yes, this latter category included concubines, but that wasn’t what the harem was for. The vast majority of Muslim homes in the Ottoman Empire would have had a harem, even if it was just a single room, so the family’s women had their own space. Some Christian and Jewish households in the empire also followed this segregated style out of custom. 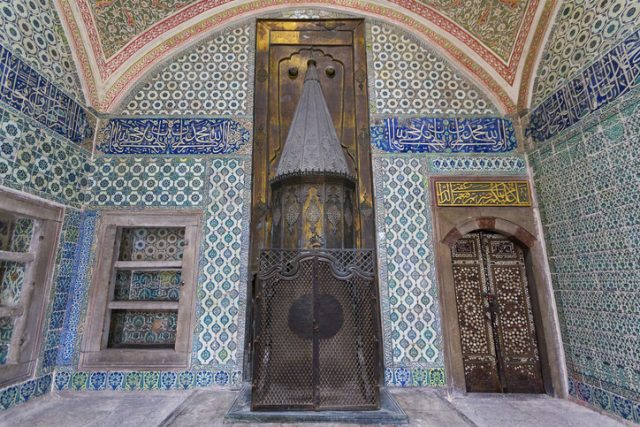 One of the rooms in the Harem section of Topkapi Palace, known as women’s quarters, in Istanbul, Turkey.

The harem was designed in accordance with the religious Sharia law, which ruled that in public women had to be watched closely by men and kept veiled. In the harem, however, they were free to do as they liked in the company of only other women.

For the vast majority of women the harem simply functioned as a household within a household and they had absolutely no contact with the sultan — the noble women did the things that noble women do, and their servants served them.

At the head of the house was the sultan’s mother, who held the title of Valide sultan. 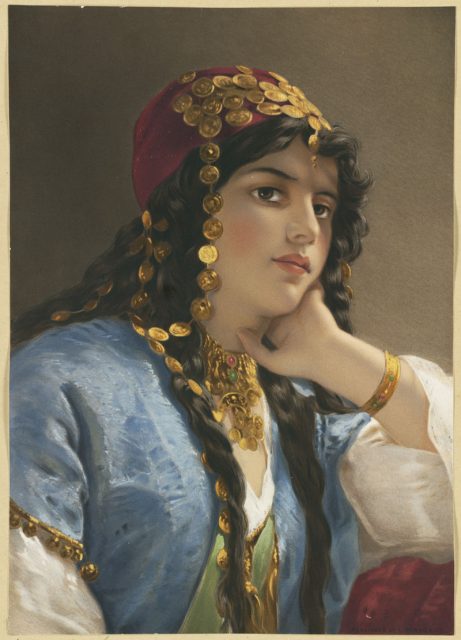 Within the harem the women were educated to become suitably sophisticated society brides and mothers for the bachelors in the sultan’s court, and the sultan’s daughters were useful chess pieces in wooing political allies.

The reality of the seedy myth though, is that the Ottoman Sultans kept large groups of concubines in the harem of Topkapi Palace. In fact they were permitted to sleep with any of their female servants and slaves who took their fancy — and often did — but only concubines were there primarily for sex. 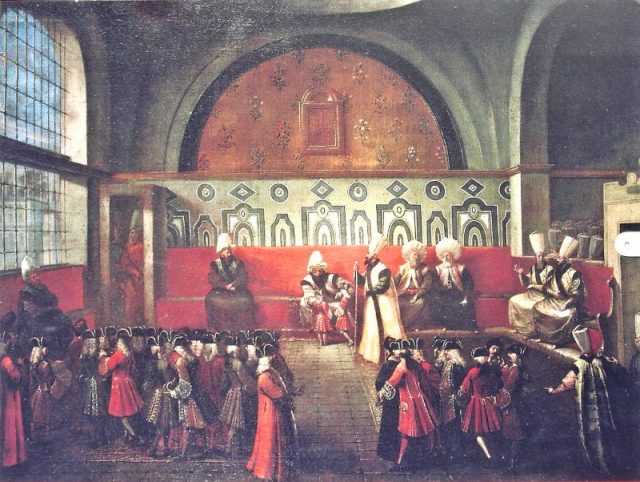 Reception of the children of Marquis de Bonnac by the Ottoman Sultan.

Muslims could not be sold as slaves, so the role of concubine was filled by purchases of Christian girls taken from the Caucuses, Syria and Africa and given exotic Persian names to make them worthy of an emperor’s attentions.

They were kept under the watchful eyes of eunuchs. They were seen as less than men and therefore able to enter the harem. Concubines were expected to cater for all the sultan’s pleasures, including reading poetry and playing music, but their main role was in bed and to give the sultan a male heir. 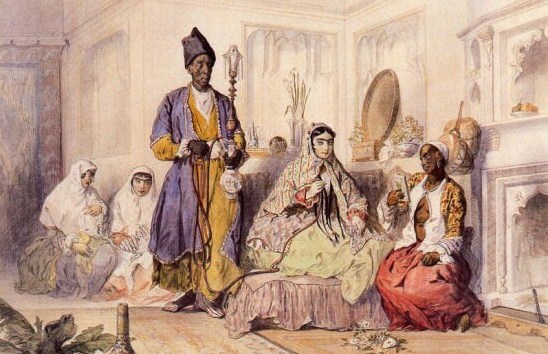 The children were raised in the harem with their mothers, who might be rewarded for their service by becoming one of the sultan’s four wives permitted under Islamic law.

With multiple wives and concubines producing large numbers of children with a potential claim to the throne (boys remained in the harem until puberty), the demise of an old sultan would generally end poorly for this extended family.

Beginning with Sultan Mehmed II — who on his accession in 1444 did away with his male relations — Ottoman law expected a new sultan to have his brothers got rid of, garotted with silk bowstrings or handkerchiefs at his command. It’s estimated that in total 78 Ottoman princes were done away with in this manner. 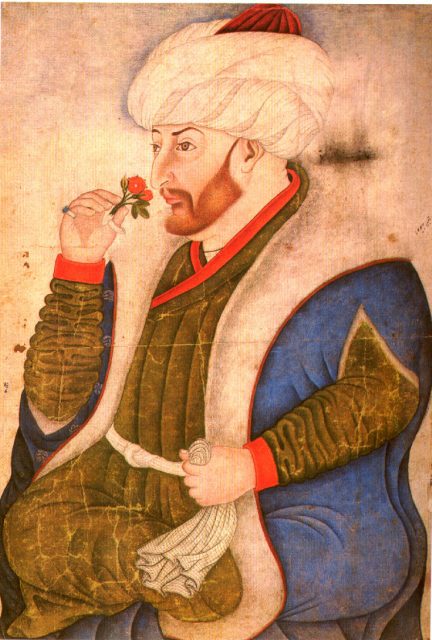 From 1603 a more “humane” solution was preferred — these potential rivals were imprisoned in the harem from childhood in kafes. The kafes, or prince’s cages, of Topkapi Palace were small apartments that were cut off from the outside world, even within the isolated harem.

Deprived of education so that they would be unqualified to rule, they were released once they hit puberty. Emotionally troubled and isolated, many of the young princes would take their own life on their release. 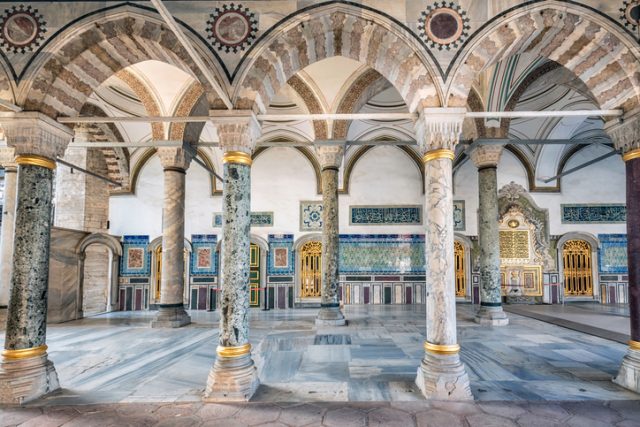 With only rumour and hearsay escaping beyond the palace walls, no wonder European travelers were driven to publish exaggerated and scandalous accounts of the goings on inside.

With few men having access to the mysterious, cloistered world of the harem, they could largely invent a steamy exotic world without fear of contradiction.

They claimed — amongst other things — that the sultan would flick his handkerchief at each unlucky girl to make his choice for night, that rebellious concubines were locked in iron cages, and that Sultan Ibrahim I, also known as “Ibrahim the Mad,” was said to have bedded 24 concubines in a single night.

Read another story from us: Incredible Portraits of Roman-Era Egyptians Give us a Glimpse Into the Past

Throughout the 19th century and into the early 20th, western writers wrote lustily of raunchy escapades behind the palace walls, and artists produced endless paintings of the female form inspired by the sultry image of the harem.