Five of the Greatest Viking Champions

For the Vikings, one of the most important things was renown. To have stories told about your deeds in battle, your cleverness, or wisdom in ruling was everything.

From the lowest hirdman in the shield-wall to the rulers of vast tracts of land, all wanted their deeds to be remembered in song and story.

A good skald was important and the Scandinavian bards were almost as famous as the men who employed them. Here are short bios of just some of the most well-known and accomplished Viking warriors – with the exception of those in the well-known TV series. 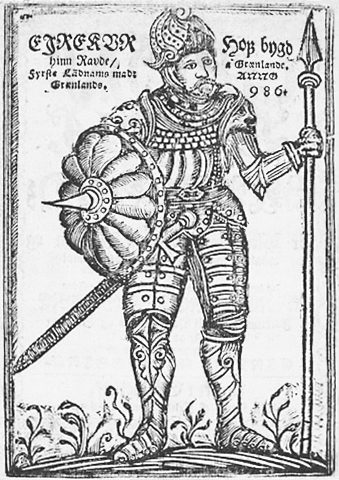 Erik the Red from Arngrímur Jónsson’s Grönlandia. Note anachronistic details in his weapons and armor.

Before the TV series, Erik the Red (born c. 950) was the most famous Viking of them all – with the possible exception of his son, Leif. His daughter, Freydis, who you will also read about here, was another fierce personality.

Erik (whose real name was Erik Thorvaldsson) was not a nice guy, even by Viking standards: when quite young, he killed a neighbor and was exiled from Norway along with his family. 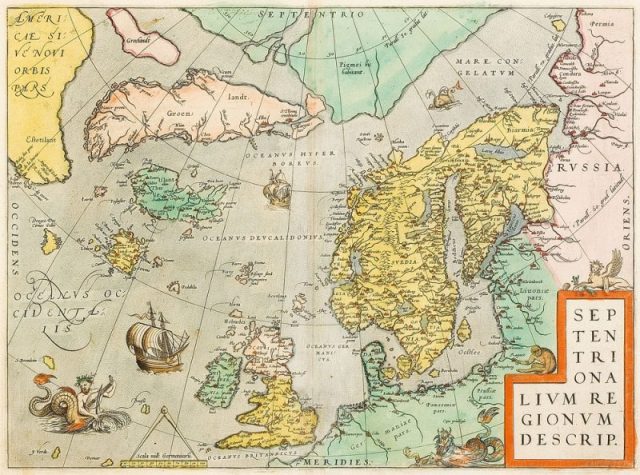 Map of the northern region (including some fantasy islands) by Abraham Ortelius, c. 1570

They went to the newly settled Iceland, but Erik found himself in trouble again. His slaves started a landslide which damaged a neighbors’ farm. When the neighbor killed Erik’s slaves, Erik took matters into his own hands and killed the neighbor and a kinsman.

Since he did not have the matter adjudicated at the Thing (the meeting where arguments were supposed to be resolved and laws made), Erik was exiled again to an offshore island. 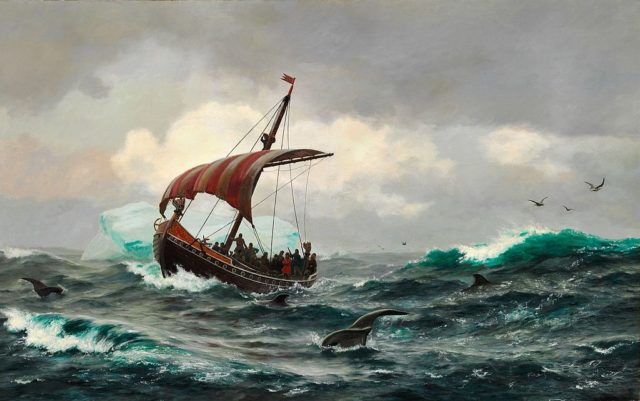 While building a new house, he was going to use some elaborately carved beams which had been in his family for years. Another family apparently stole them, and Erik sought revenge.

He killed two of the thieves, and apparently, with some of his friends, a few others friendly to them. At the next meeting of the Thing, Erik was outlawed. 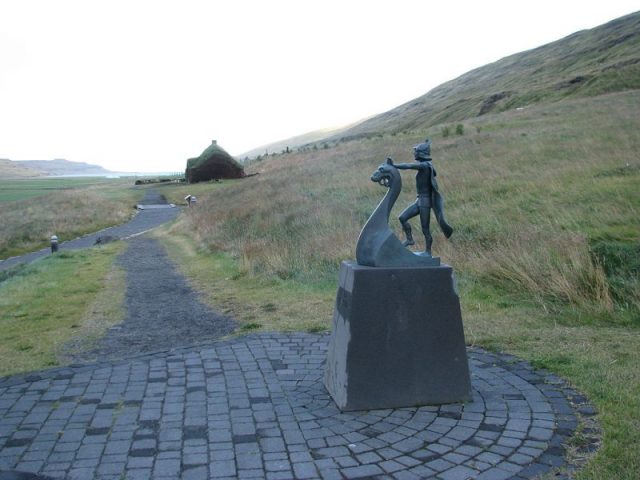 Being an outlaw in Viking times was not good. You were not protected by the law (not that that seemed to matter much), and anyone could harm you without consequence.

Erik decided to skedaddle. History records Erik as the first European to see Greenland, though others likely made it there first.

At any rate, he returned to Iceland despite his outlaw status and convinced some of the settlers there to come with him to a new “green” and fertile land. History may have found its first ad executive – for Greenland was anything but green and fertile, but that’s a story for another time.

Sweyn (or Sven) Forkbeard and Cnut the Great 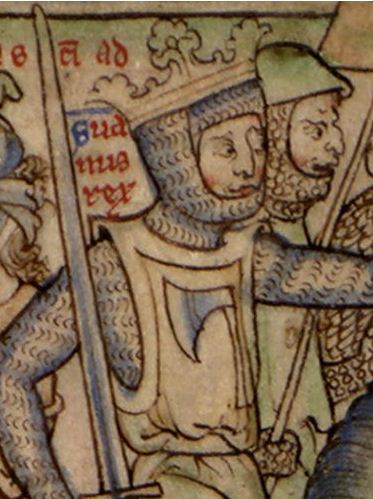 Sweyn was the son of the famous Danish king Harald Bluetooth (yes, the name of the technology comes from him). Harald ruled Denmark for some 30 years and was the first Viking of note to become Christian.

Many believe this was less a matter of faith than of self-preservation, as Harald’s neighbor was the powerful Christian Holy Roman Emperor Otto I. 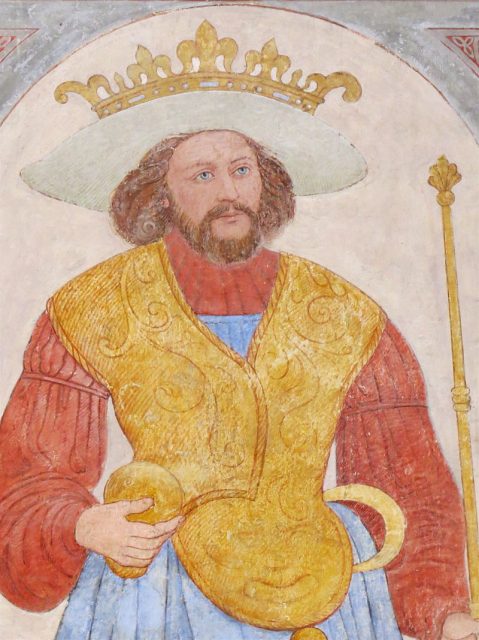 Apparently, Sweyn felt he had waited long enough for the throne, and deposed his father in around 986-987. Sweyn was a skilled warrior with many skilled warriors in his army, and led a brief campaign in Norway, eventually ruling most of the country along with a Norwegian jarl by the name of Erik.

Though he deposed his Christian father, Sweyn was no pagan. He took many priests and monks with him on his campaigns, hoping to spread the religion to new places. Being a Christian, however, did not mean that he wasn’t a Viking at heart. 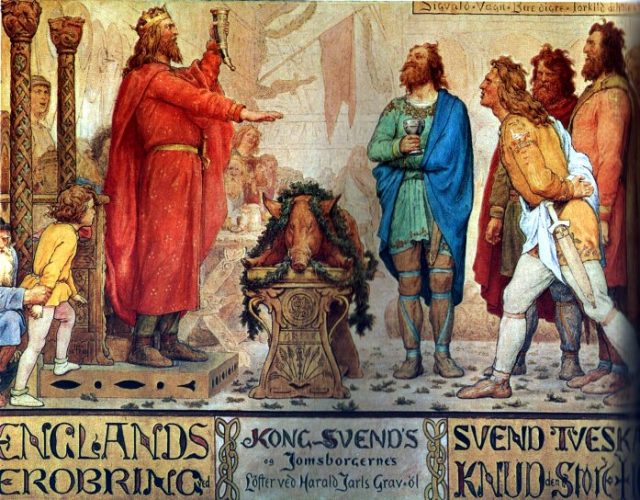 Sweyn and the Jomsvikings at the funeral ale of his father Harald Bluetooth. Painting by Lorenz Frølich, c. 1883–86, Frederiksborg Castle.

Sweyn led raids, massive raids, against England in 1002-5, 1006-7 and 1009-1012. This was done not only for riches and power but for revenge, for in 1002, English king Æthelred the Unready ordered that all the Danes in England be killed. This is known as the St. Brice’s Day Massacre.

In 1013, Sweyn could be bribed by the English to leave no more. He mounted a devastating campaign and conquered all of the major cities of England, forcing Æthelred and his family to flee. 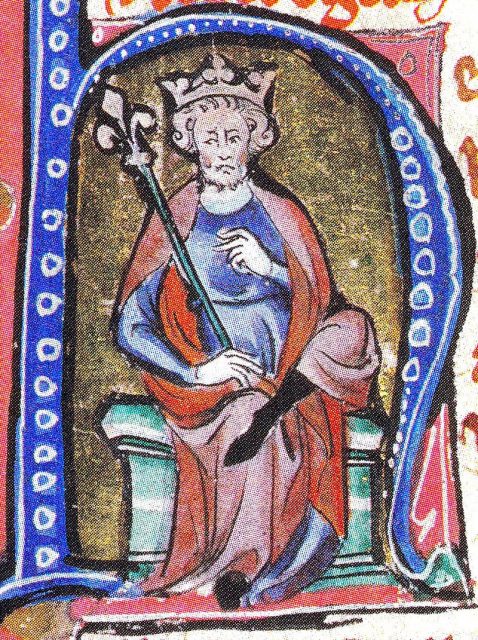 Ruling for but a short time, Sweyn gave Denmark to his son Harald, and England to his son Cnut. Æthelred returned to drive Cnut back to Norway in 1014, but in 1016, Cnut led a massive Viking army back to England and was crowned king in 1016.

He soon ruled Denmark after his brother’s demise and took by force most of Norway, parts of Sweden and ports along the Baltic Coast. History remembers him as “Cnut the Great.” 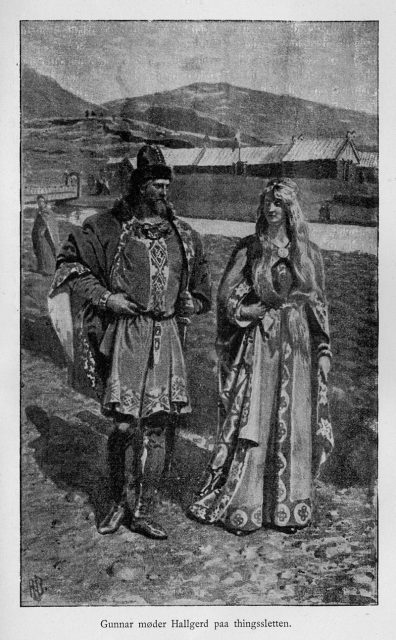 Japan’s greatest swordsman was Miyamoto Musashi, who was undefeated in 61 duels. Gunnar Hamundarson is “Iceland’s Musashi.” In the famous “Njal’s Saga,” Gunnar is described as being able to fight equally well with both hands and moved so fast that it seemed he was using three swords rather than one. He was equally good with a bow and could jump a man’s height wearing full battle gear.

Vikings didn’t only raid foreign shores. Knowing that others returned to Norway and Denmark with massive amounts of plunder and bribes, other Viking clans often tried to take what their “brothers” had. One of them was Gunnar, who raided the coasts of Norway and Denmark. 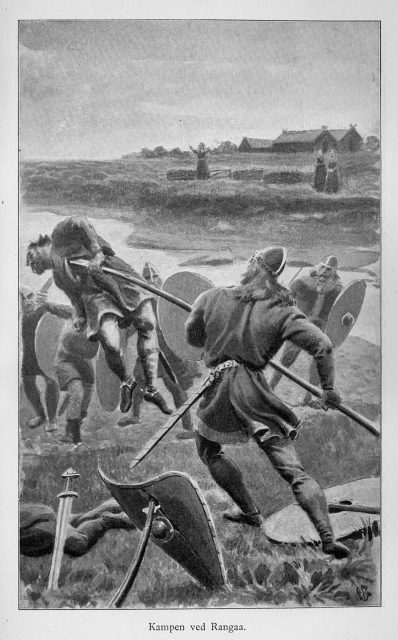 Gunnar defends himself at Rangá.

Gunnar was never defeated, but he did kill two men who angered him and found himself outnumbered as his victims’ clan came after him. Cornered but holding them off, he broke his bow-string.

When he asked his wife for help in repairing it, she refused, because he had recently hit her. With that, his enemies rushed in — and that was the end of Gunnar.

Freydis, whose last name followed Norse practice as Erik the Red’s daughter, was not a person to be trifled with, as you can imagine. According to two sagas, those tales of the Vikings mostly written centuries later, Freydis gave birth to a child in the New World, but history does not record the baby’s name.

Freydis was on the voyage led by Thorfinn Karlsefni, which allegedly was the first Viking expedition to land in North America. 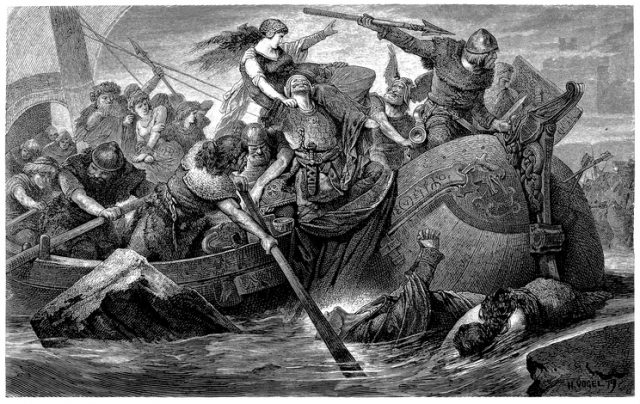 Illustration of a Viking raid, wood engraving by Hermann Vogel, published in 1881.

While in North America, the Vikings are attacked by what they called “Skraelings”, or “Screamers” — Native American tribesmen. The surprise attack, which came during the night, shocks the Vikings and they begin to panic.

Freydis then grabbed a sword from a fallen Viking and tells her Norse comrades: “Why run you away from such worthless creatures, stout men that ye are, when, as seems to me likely you might slaughter them like so many cattle? Give me a weapon! I know I could fight better than any of you.” She beats her breast with the flat of the sword, yells a battle cry, and the natives then panic and flee.

Check out 10 things you may not know about the Vikings:

As a side-note – a number of years ago, historians began putting forth the theory, which is still popular, that the previously friendly trading relationship between Vikings and Indians went bad because one of the trade items the Vikings gave was milk, or milk products like cheese or skyr.

Native Americans, not having domesticated cows, were lactose intolerant and believed the Vikings were trying to poison them. Or so the theory goes.