Thinking of the mid-19th century, it is hard to imagine seven sisters being popular for their physical features, attracting the public, being constantly followed by the media, and selling their own products. And yet, there lived seven, very popular sisters — the Sutherland sisters — famous for their Rapunzel-esque tresses.

Sarah, Victoria, Isabella, Grace, Naomi, Dora, and Mary Sutherland were born between 1845 and 1862. They grew up penniless and barefoot on a turkey farm in Cambria, in Niagara Country, New York.

However, the girls’ mother held a peculiar fixation for their long hair. She forbade them to trim their hair, and every evening slathered the girls’ heads with horrible smelling hair oil, believing that it would make their hair thick and strong. Apparently, she was right. 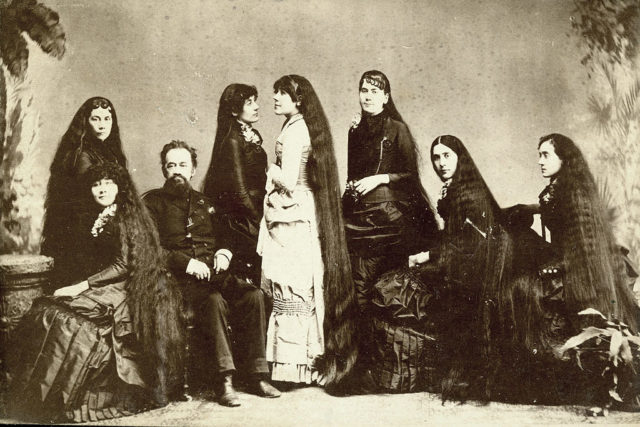 The girls sang and played instruments at local music performances, but their father, Fletcher Sutherland, noticed that nobody cared about their concerts. The audiences mainly came to admire the girls’ magical, almost mythical, long hair.

After the death of his wife in 1867, Fletcher thought of earning riches on the girls’ popular hair. He promoted them as “The Seven Wonders” and soon agents of circus and freak shows came knocking on their door.

By 1880, the girls made their Broadway debut, and in 1882 they joined Barnum and Bailey’s Greatest Show on Earth. At the time the sisters’ ages ranged from 18 (Mary) to 36 (Sarah). 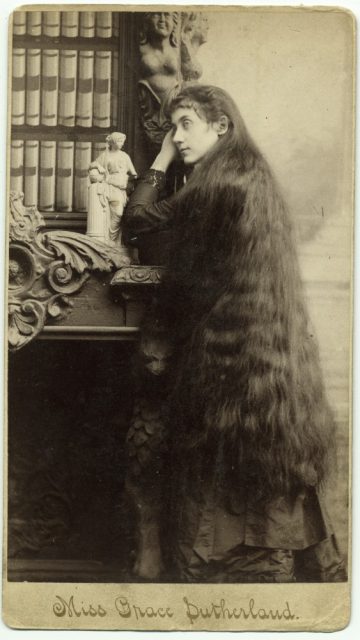 They all performed together on stage, wearing white gowns, singing, playing church music, and telling stories. At the end of their act, the sisters loosened their braids, letting their hair drape into the orchestra pit.

The sight of their hair gave them a goddess-like status. They were known as “The Seven most pleasing wonders of the world.” The Sutherland sisters became a symbol of the beauty of the Victorian era — every Victorian woman aspired to have such long hair.

Sarah had the shortest hair, at “only” three feet long. Therefore, every time the sisters posed for photo shoots, Sarah would sit while the others stood, slightly bent at the waist so their locks touched the ground. Between them, the Sutherland sisters had 37 feet of hair. 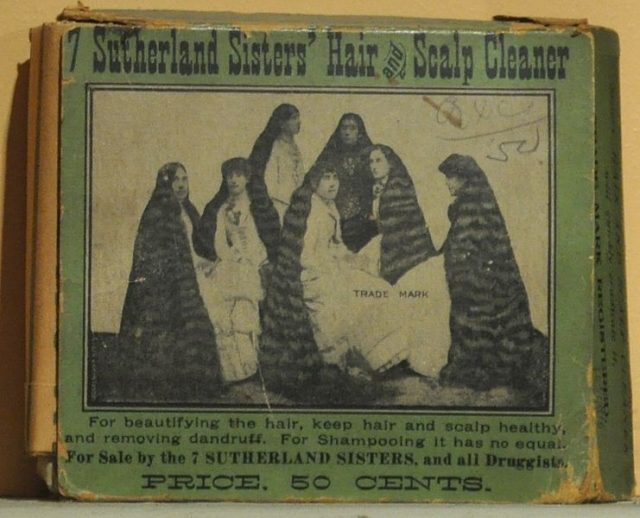 Victoria had the longest hair, a full seven feet. Naomi preferred wearing hers in a braid, four inches thick. The youngest of the sisters, Mary, was mentally unstable and some doctors and preachers blamed her six feet of hair for her condition.

Fletcher Sutherland proved to be a great businessman. Although the sisters were already rich, their father made them the richest women of the century.

In 1882, he came up with the idea of patenting and selling a Hair Growth tonic, made after the formula that his wife used for her hair oil. Targeting the American women of middle and upper-middle classes, the tonic was sold at the pricey sum of $1.50 a jar, an average American weekly salary at the time.

However, as the sisters dived into their fortune, one might say that they drowned in it. Their father died in 1888, and in 1893, the sisters returned home to rural Cambria where they built a 14-room mansion in which they lived together.

Both inside and outside, their home seemed like a royal castle, complete with turrets, cupolas, chandeliers, and marble bathrooms. They owned winter and summer wardrobes full of custom-made clothes, their carriage horses were covered in gold, the sisters’ pets treated like royalty, and each one of them had a personal maid paid to comb their precious hair every night.

Naomi died that same year at the age of 40 and didn’t enjoy the life of the sisterhood in this fairy tale home. The sisters were devastated.

They started organizing gala events with booze and drugs and soon everything started getting out of control with love triangles and in-fighting as their daily routine.

All that money in the hands of six single women attracted many adventurers. First, there was the 27-year-old eccentric Frenchman, Frederick Castlemaine who chased Dora but ended up marrying the 40-year-old Isabella. In 1897, while accompanying the sisters on one of their tours, Castlemaine committed suicide. The sisters brought his body home and kept it for weeks in the music room, unembalmed, in a glass-domed casket, and sang him his favorite songs.

The local health department had to intervene and force the sisters to bury the body. For the following two years, Isabella walked three miles to the cemetery, every night, until she met and married Alonzo Swain, 16 years her junior.

Victoria married a 19-year-old when she was 50. She was kicked out of the mansion and ostracized from the sisterhood until she was on her deathbed, three years later in 1902.

After draining all her shares and isolating Isabella from her sisters, Swain disappeared and Isabella died alone and in poverty in 1914. Five years later, in 1919, Sarah died.

In the 1920s, nobody was interested in the Hair Grower. Short bob hair promoted by the flappers became the new fashion, and women followed the new trend instead of growing their hair long. No shows, no incomes, no fame, no savings…the sisters fell from grace.

Read another story from us: Constantly Walking on Stilts – How One French Community Survived

In 1926, the three surviving sisters — Grace, Dora, and Mary — traveled to Hollywood, hoping to sell their story. Their trip was unsuccessful and ended in tragedy when Dora was killed in a traffic accident. Grace and Mary didn’t even have the money for the cremation.

Mary, with her periods of insanity, was often kept locked in her room and ended up in an asylum where she died in 1939. Grace followed her seven years later. Both of them were buried in unmarked graves.

The sister’s mansion burned to the ground in 1938.