Dinosaurs were not the only gargantuan creatures who roamed around our planet thousands of years ago. In fact, prehistory belonged to a vast array of species that would have dazzled any spectator precisely for their legendary size.

Forget about New York City’s unbelievably huge rats today — the biggest rodents of the early Pleistocene would have weighed up to a ton. Enter the hungry Andrewsarchus, whose jaw was more than capable of destroying the rock-like shell of a gigantic tortoise.

Below is a list of eight such huge megafauna mammals who left their trace on Earth in prehistory. 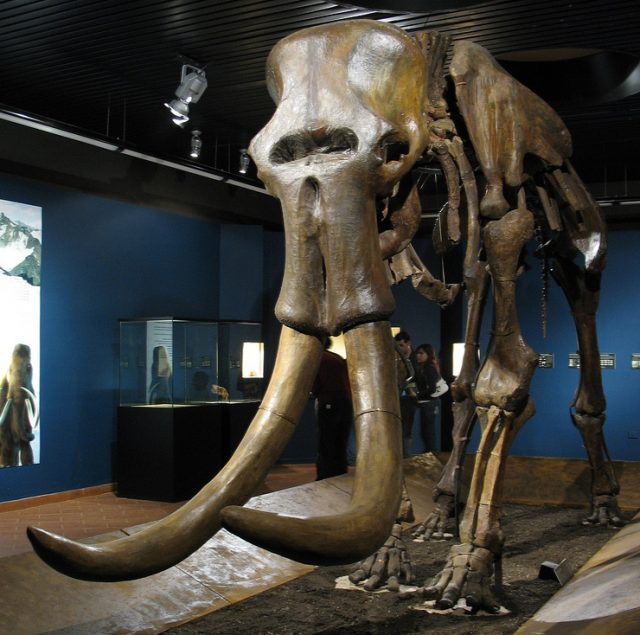 Recent, controversial de-extinction debates have brought plans of producing a clone of the woolly mammoth at some point in the near future to the table. However, any such plan does not mean reintroducing the biggest mammoth of them all.

The steppe mammoth (Mammuthus trogontherii) weighed as much as 10 tons, at least three tons more than their relative the woolly mammoth. Steppe mammoths likely originated from Siberia, but then dominated most of the north Eurasian plateau. The species thrived between 600,000 and 350,000 years ago, during the Middle Pleistocene period. 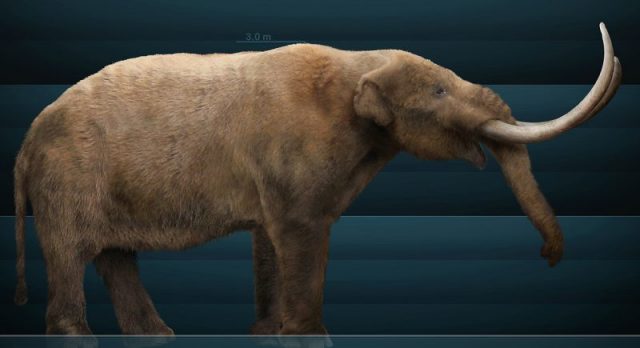 Before steppe mammoths, there were mastodons, which belonged to the genus Mammut, another distant relative of modern-day elephants. The most famous representative of this species was the American mastodon, M. americanum, which would have reached North America around 15 million years ago via the Bering Strait passage.

The first evidence of mastodons was a tooth weighing around five pounds, discovered in 1705, in New York’s Columbia County. When the tooth was sent to London it was labelled “tooth of a Giant,” a reference to a “statement in Genesis that ‘there were giants in the earth’ in the days before the Flood,” according to Smithsonian.

Mastodons had cusp-shaped teeth which were quite different than those in the mouth of a mammoth. Another body feature that distinguished the first from the former were the tusks. A mastodon’s tusks were long and curved, whereas mammoth tusks were much curlier.

These giant creatures shared more than a few similarities. Both were herbivores and both grew to roughly the same height, up to 14 feet. However, mastodons went extinct some 11,000 years ago, while a small population of mammoths survived until circa 1650 BC on Wrangel Island in the Arctic Ocean. 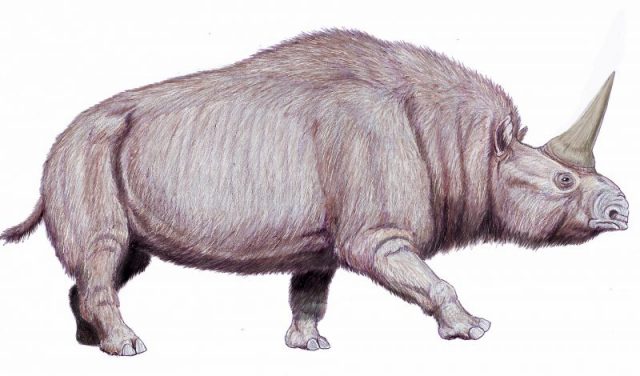 Restoration of E. sibiricum. Photo by ДиБгд CC BY SA 4.0

Another fur-covered paleo-giant herbivore was Elasmotherium sibiricum, also known as the giant rhinoceros or Siberian unicorn. Native to Siberia, these ancient rhinos could weigh in at up to 4 tons. That’s double the weight of a modern-day white rhinoceros.

The most notable feature of Elasmotherium was its mighty horn. While the it is speculated to have protruded around three feet, no fossil evidence of the animal’s horn has been found to date. As Palaeontologist Adrian Lister of the London Natural History Museum explained for LiveScience, “We have no horn preserved, or even part of one, because they were made of compressed hair and have decayed. But the animal does have this huge bony boss at the top of its skull — much bigger than in any other rhino — so the horn must have been massive. Maybe one day we’ll find one,” he said.

As a creature of the Ice Age, this ancient “unicorn” went extinct in between 40,000 and 35,000 years ago. In Europe and Asia, they would have lived alongside Neanderthals and early humans. 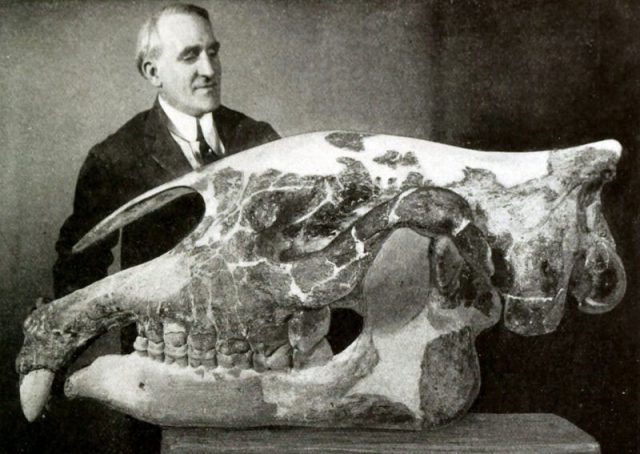 But even Elasmotherium was not the greatest rhino of all time. That designation is reserved for the Paraceratherium, which is actually “heralded as the largest mammal ever to tromp over the Earth,” notes National Geographic. Paraceratherium could grow more than 26 feet in length and is “often said to weigh as much as five elephants,” or more than 20 tons. 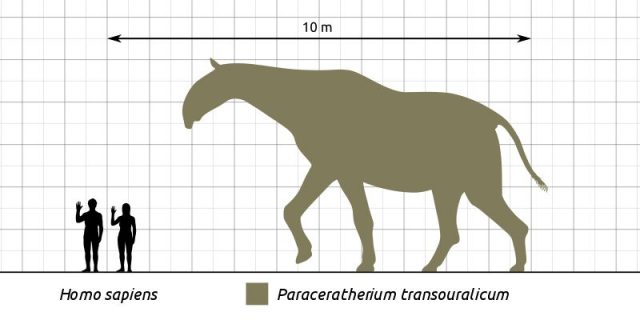 The gigantic creature thrived in Asia and Europe between 35 and 20 million years ago, and distinctively enough, there is no trace of any horn on the creature’s head. Paraceratherium, which belongs to an entirely extinct group of rhinos, was tall and had a long neck, enabling it to reach higher into the canopy for food than other rhinos. 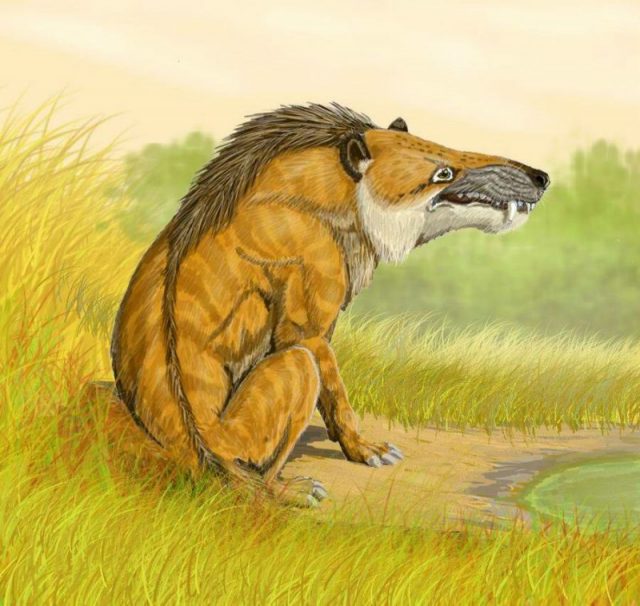 Andrewsarchus mongoliensis from the Late Eocene of Central Asia was a large cetancodontamorph ungulate, related to hippos, entelodonts and whales.

Our knowledge of the species known as Andrewsarchus is based on a single three-feet-long skull that was discovered at the the Irdin Manha Formation, Inner Mongolia in 1923. According to the American Museum of Natural History, there was disagreement among the expedition team — led by Roy Chapman Andrews, after whom the creature was named — over whether the wolf-like features belonged to a carnivore or an ancient omnivorous pig species.

Andrews later became the director of the American Museum of Natural History from 1935 until 1942. If he was right, then this makes Andrewsarchus “the largest known meat-eating land mammal that ever lived.”

Based on the skull, experts have concluded that Andrewsarchus would have weighed around one ton, with a body that stretched some 12 feet in length. Its jaw was very powerful and so were its legs. This ferocious beast perhaps ran faster than a modern-day wolf. The largest predator on four limbs — it lived in between 45 and 35 million years ago. 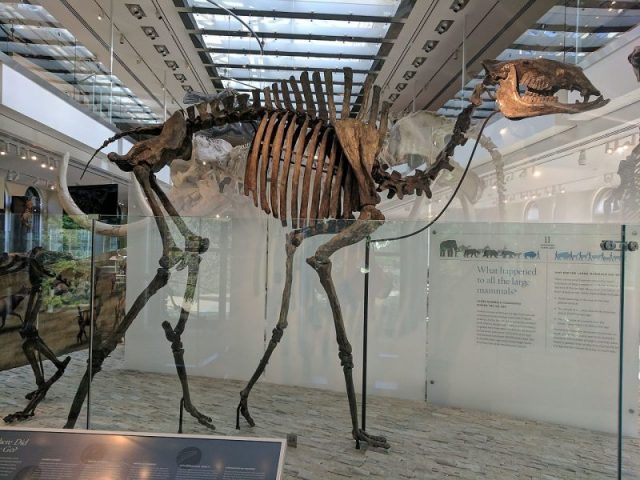 Famed for the unique fatty humps on their backs, camels are often our first association with deserts. Prehistoric relatives of these Bedouin friends were also much greater in size than the animals we are familiar with today.

An individual of Titanotylopus would have weighed probably a ton. Titanotylopus is thought to have originally evolved in North America and variants of the species took millions of years to populate areas in Asia.

The name Titanotylopus, which is derived from Greek meaning “giant knobby-foot,” refers to the giant camel’s most notable asset — its feet. They were flat and designed for the animal to easily move over dry, rugged landscapes. The species has been distinguished by palaeontologists thanks to their large upper canines, differentiating them from any other early big camelids. Titanotylopus disappeared some 30,000 years ago after a 10-million-year presence on Earth.

Skeleton at the Finnish Museum of Natural History

Steller’s Sea Cow, or Hydrodamalis gigas, once thrived on the shores of the north Pacific. It would have appeared as a species some two million years ago, and the last of its kin were among us until relatively recently.

This marine giant, which weighed some 10 tons and stretched 30 feet in length, was the precursor of modern-day manatees and dugongs. Its gargantuan body, which contrasted ridiculously with its small head, was reliant solely on seaweed for sustenance.

The species was named after German botanist Georg Wilhelm Steller who had the rare opportunity to study some of the last living specimens that survived in the area of the Commander Islands in the Bering Sea, back in the 18th century. Following Steller’s research, the last of this ancient sea cow population fell prey to sailors, who hunted them for their whale-quality oil. The meat of this prehistoric creature was probably tasty too. 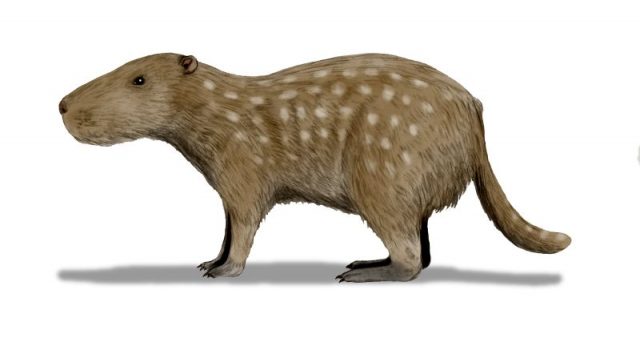 Josephoartigasia monesi, a rodent from the Pliocene of Uruguay, pencil drawing, digital coloring. Photo by Nobu Tamura – Own work CC BY 3.0

Millions of years ago was a time when even rodents were capable of growing to unimaginable proportions — as much as one ton in weight and 10 feet in length. Fossil evidence collected from South America confirms that was indeed the size of your average Josephoartigasia monesi — the largest rodent ever found.

Given its significantly amplified proportions, the biggest rodent from prehistory was a bit more sophisticated than rodents today. Its diet encompassed delicious fruits and plants. Its prominent teeth would have looked nothing but formidable — just imagine a rat larger than a cow.

Read another story from us: World’s Largest Bee Reappears After Missing for 38 Years

Palaeontologists first described Josephoartigasia as a species only a decade ago, in 2008. Like the case with the Andrewsarchus, they had to figure out the rodent’s features solely by working on one 20-inch-long skull retrieved from a 4.2 million-year-old rock in Uruguay.