The faces of the kings in the standard pack of playing cards may appear to be simply anonymous, generic representations of the monarchy, but according to the International Playing Card Society, in France, they once depicted some of the most famous leaders in history.

Although they have been subject to many design changes over the years, in 17th century France, the four kings in the deck of playing cards were given names and identities, reflecting the importance and grandeur of the French monarchy itself.

French rulers wanted to cast themselves as the heirs to the ancient kings of old, and as result, the kings on the playing cards represented some of history’s most iconic leaders: Charlemagne, David, Caesar and Alexander.

The origins of playing cards, as we know them today, are somewhat obscure. According to historian Joseph Needham, they first appeared in Tang China, in the 9th century AD, but these early cards were not organized into suits, with numbers and symbols, until much later. 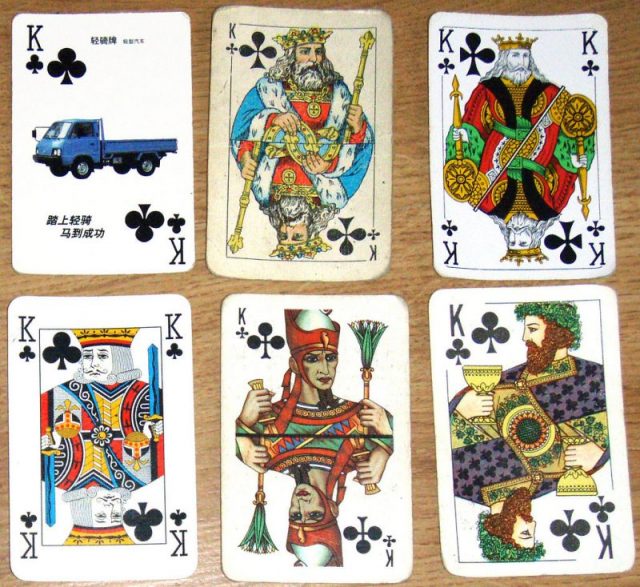 Six different representations of the king of clubs

It is thought that the king first appeared on playing cards produced in India or Persia, and that these cards were brought to Europe via the Iberian Peninsula in the Middle Ages.

We can be fairly sure that playing cards appeared in Europe in the late medieval period, probably in the second half of the 14th century. Around this time, sermons written by concerned clergymen in Italy, France and Spain referenced playing cards, usually in conjunction with prohibitions of dice and gambling. 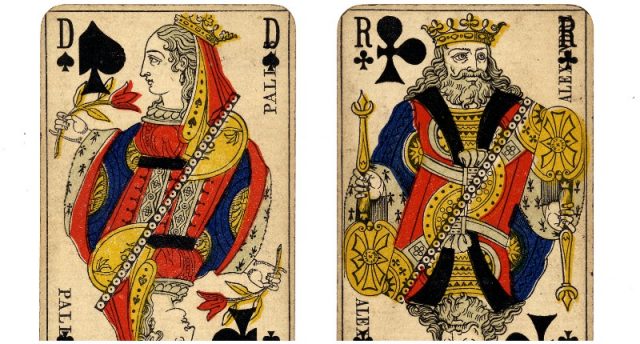 In the medieval period, the design of playing cards varied wildly, although there were some familiar elements that seemed to remain consistent. According to the International Playing Card Society, most variations included a combination of numbered cards with three or sometimes four “royal” cards: king, queen, knight and knave. These were then divided into suits represented by different symbols, including a cup, coin, sword and stick.

These cards, and the games associated with them, soon became incredibly popular across Europe, and manufacturers began to experiment with ways to streamline their production. 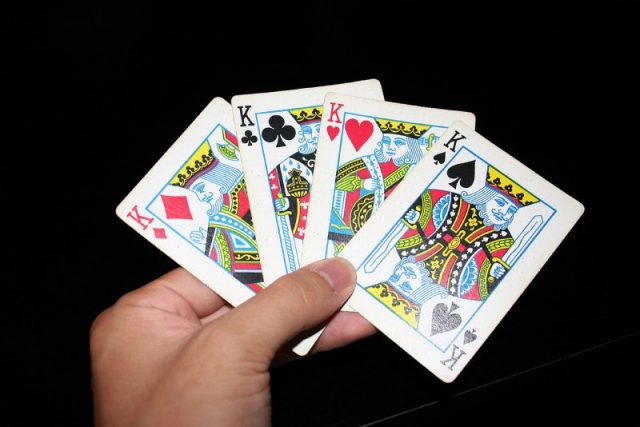 King cards of all four suits in the English pattern. Phoot by Enoch Lau CC BY SA 3.0

Regional variations began to develop, as different areas began to standardize the iconography associated with their cards. In Germany, for example, queens were removed entirely, and the original symbols were replaced with bells, hearts, leaves and acorns. 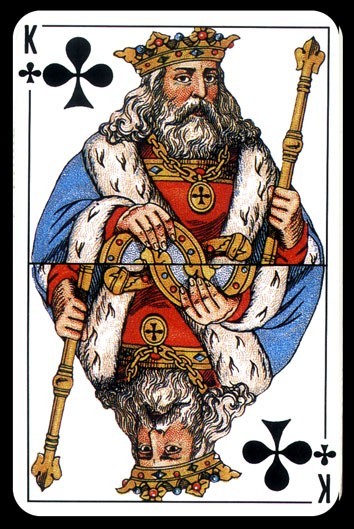 French craftsmen, however, soon learned new techniques to make the production of cards more efficient, and it was their designs that began to dominate within Europe. According to the International Playing Card Society, they reintroduced the queen, but kept some of the German icons to represent the suits, establishing the symbols that are so familiar today: hearts, spades, clubs and diamonds. 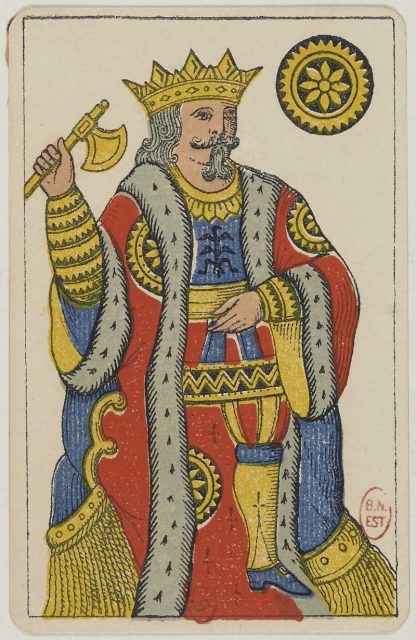 King of coins from Aluette, a Spanish-suited deck still in use in France. It is related to the Toledo pattern.

Where the French were truly innovative, however, was in giving the royal cards names from history. In the 16th century, card designers experimented with a variety of characters including Roman heroes such as Augustus or Constantine, or Biblical figures such as Solomon. However, by the early 17th century, they had settled on four key figures that resonated with France’s self image.

The king of hearts was identified as Charlemagne, the iconic French hero who unified the Franks and created the great Carolingian Empire. This was a reminder of France’s great past and the longevity of its monarchy. 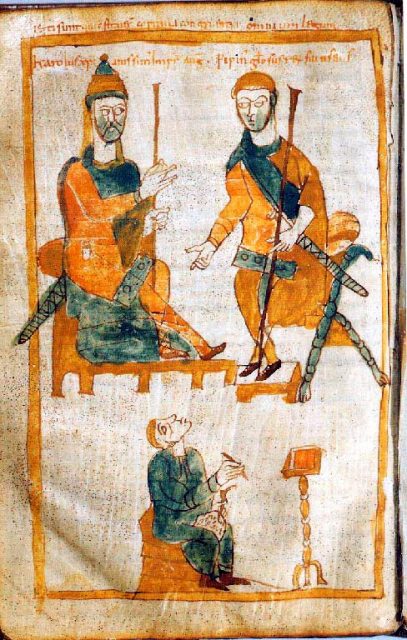 Charlemagne (left) and his eldest son, Pepin the Hunchback. 10th century copy of a lost original from about 830.

The biblical figure of David was the king of spades, representing the triumph of the righteous over the strong. The king of diamonds was represented by Julius Caesar, Roman hero and the conqueror of Gaul. Finally, the king of clubs was Alexander, the ancient Greek leader who defeated the Persians and conquered lands as far away as the Hindu Kush.

The practice of giving names and identities to the royal cards endured for almost 200 years in France, although it was not widely adopted across the rest of Europe.

By the end of the 18th century, however, French revolutionaries began to disapprove of the overtly monarchical overtones of the design of playing cards. Instead, they favored more neutral symbols and imagery that did not operate to glorify France’s monarchy.

As a result, the practice of identifying the royal cards as individuals from history died out in the early 19th century and today the kings on playing cards, even in France, have no historical connections.

Read another story from us: The Secret Meanings and Symbols Behind Playing Cards

However, for a time, the names of these four ancient rulers graced playing cards in France, providing fascinating insights into the self-fashioning of French monarchical identity in the early modern period.

« A Literal Piece of History: The Blood-Stained Garment from Lincoln’s Assassination
Beautiful 300-yr-old Churches Made Entirely out of Wood Without any Nails »