Lake Onega ― on the very brink of Northern Europe ― is sprinkled with more than 1,600 tiny islands. It is the second largest lake in Europe, located in northern Russia, between Lake Ladoga and the White Sea.

While most of these islands are uninhabited and have little to show apart from stunning nature, one of them holds a true wonder and a real gem of cultural heritage.

On the island of Kizhi, there is a 300-year-old Orthodox Christian complex, known as Kizhi Pogost (meaning enclosed cemetery), which includes two adjoining churches and an octagonal bell tower ― all made entirely out of wood. 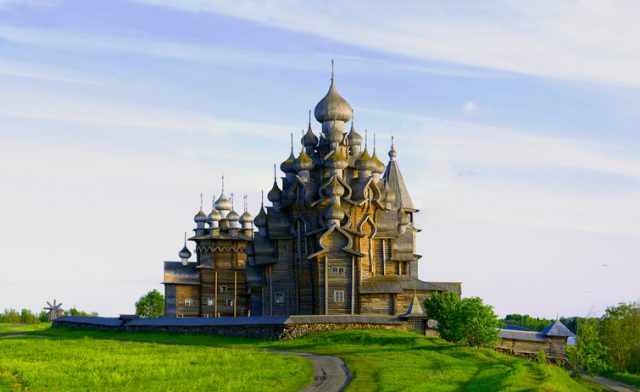 Although both of the churches were built in the 18th century, the bell tower was actually added in 1862, as the original one quickly deteriorated due to harsh weather conditions.

The bigger of the two churches, called the Church of Transfiguration, was built on the site where a previous temple was burnt by lighting. It was officially opened when its altar was laid on June 6, 1714, and was renovated in the 19th century, around the time the second bell tower was built. 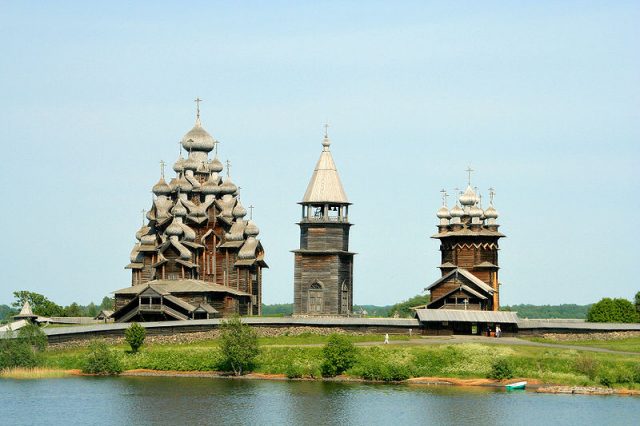 It is built entirely out of wood, using the octagonal shape of the building to provide the logs with necessary interlocking corner joinery. The traditional Russian carpentry relies on the use of such angular locks which fix the wooden logs in place — meaning no nails were used in the construction of the Kizhi Pogost. 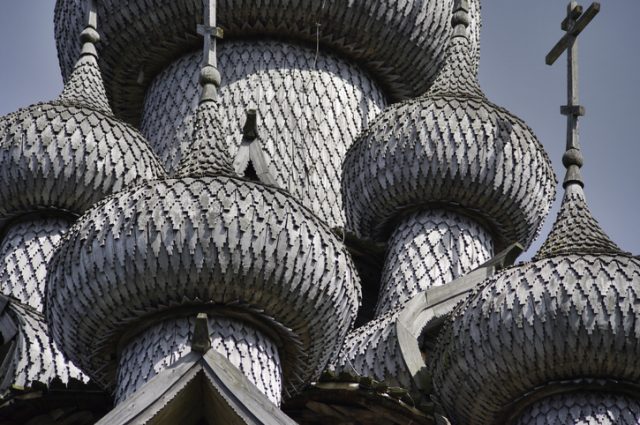 Close-up on the domes of the Church of Transfiguration, Kizhi Island, Russia.

Usually, a carpenter would carve with his axe a simple round notch or a dovetail joint, as this technique proved most effective with building large wooden structures such as this church. It holds 22 domes, all of which have a silvery shine once met with sunlight, due to the grey shingles made of aspen. The roofs are covered in spruce, and white pine was mostly used for the logs that make up the walls of the church. 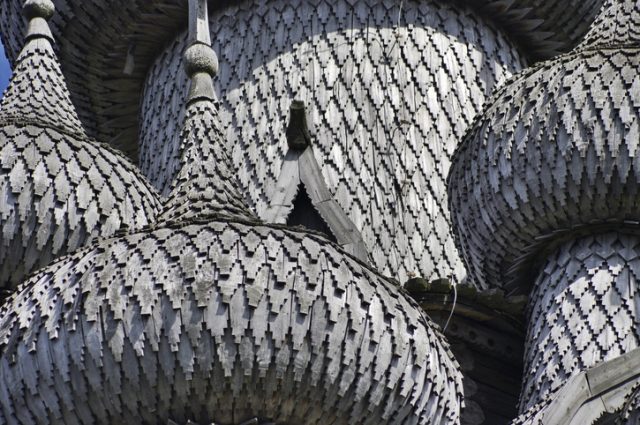 The Church of Transfiguration has no heating and is considered a “summer church”, only holding service during the summer months. With its height surpassing 37 meters, it is often hailed as the tallest wooden structure in Northern Europe.

Although the names of its builders remain unknown, legend has it that the church was erected by the hands of a single carpenter who, after completion, threw his axe into the lake and proclaimed: “There was not and will be not another one to match it.” 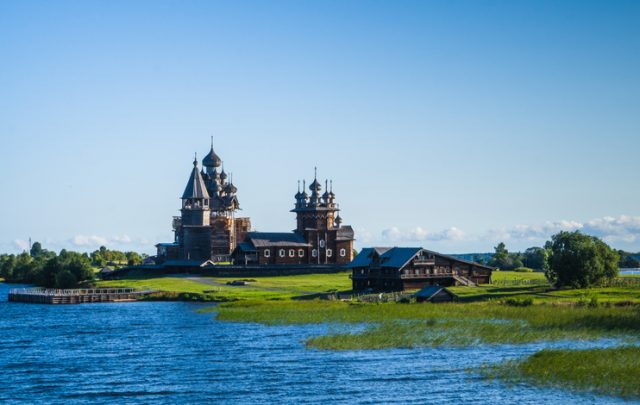 View of Kizhi Island, the historic site of churches on the marshy banks of the island which is a UNESCO World Heritage Site

While the church attracts visitors from afar, due to its breathtaking exterior, its collection of 102 icons, among which is the “The Transfiguration”, represents the true treasure of Russian cultural heritage.

As for its counterpart: the smaller yet equally dazzling Church of the Intercession was also constructed as part of the re-built Pogost after a fire swept away the previous churches in the late 17th century. First built as a single-dome, it was re-built between 1720–1749, only to get its iconic nine domes after another reconstruction in 1764. 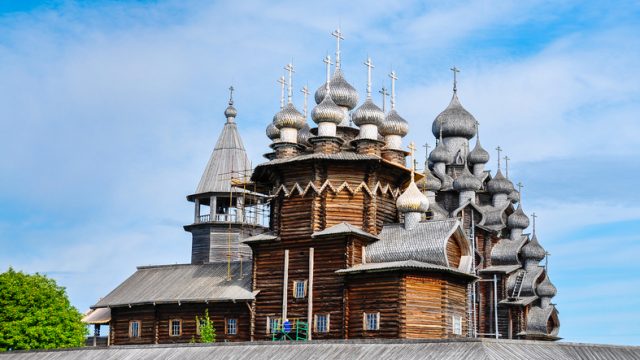 The design of the second church was intended to correspond with and complement the first one — the Church of Intercession is also known as the “winter church”, holding service from October 1st until Easter.

It is built in very similar fashion, also lacking steel nails and relying only on the logs fitting together for support. Although the inside decorum is more modest when compared to its older sister, the Church of Intercession possesses an intricate wall of icons, known as an iconostasis. 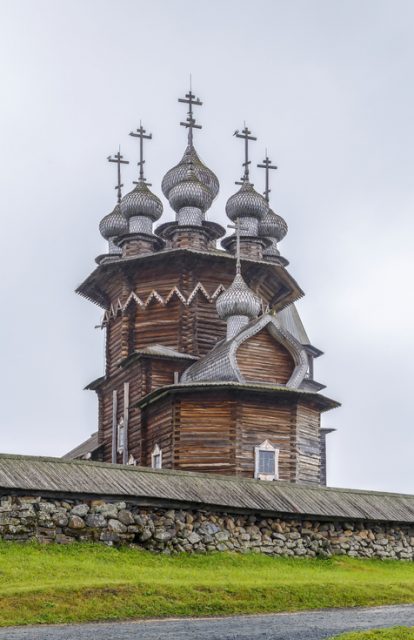 Historical site dating from the 17th century on Kizhi island, Russia. Church of the Intercession of the Virgin.

Although the complex has been exposed to harsh weather and has always been at risk of fire due to its wooden construction, the Kizhi Pogost has managed to survive for three centuries, a standing witness to the ingenuity of the 18th century engineers and architects who relied exclusively on wood.

Read another story from us: 800-yr-old Crusader Body Desecrated by Vandals in an Irish Church Vault

Since 1990, the entire Kizhi Pogost complex was included in the UNESCO list of World Heritage sites, and several years later it was proclaimed as a Russian Cultural Heritage site.