The “Doomsday Vault” in Norway in danger as world gets hotter

The idea that humanity should keep a vault that will secure life in case of global catastrophe has been conceived in stories such as the one about Noah’s Ark in the Bible.

With the advance of modern technology and engineering, the idea turned into reality in 2008, when the Svalbard Global Seed Vault was built on a remote Norwegian island.

The specialized facility is found far to the north in the mountains of Spitsbergen island, part of the Svalbard archipelago between mainland Norway and the North Pole. 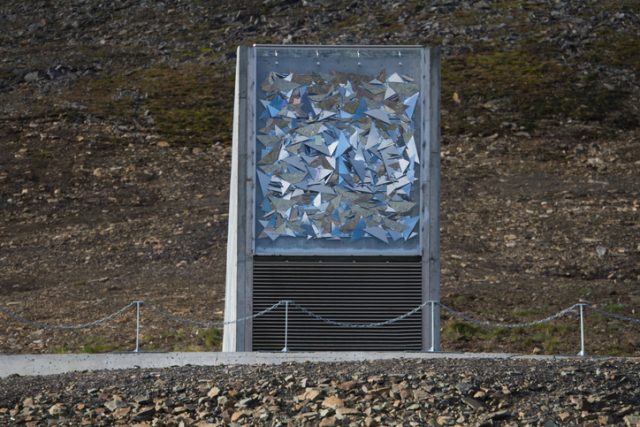 The site, which is famously known as the Doomsday Vault, “has a capacity for 4.5 million varieties of crops, with a maximum of 2.5 billion seeds,” reports Time.

Nearly a million samples of important seeds from all around the world have already been shipped to the island with hopes this will secure food resources in an Armageddon scenario. 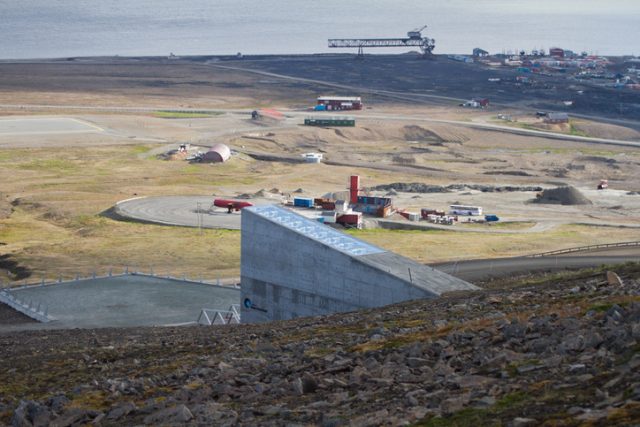 Time further notes: “It would be difficult to find a place more remote than the icy wilderness of Svalbard. It is the farthest north you can fly on a commercial airline, and apart from the nearby town of Longyearbyen, it is a vast white expanse of frozen emptiness.”

That is, until it will be a frozen emptiness no more if world governments fail to address the current climate crisis appropriately. 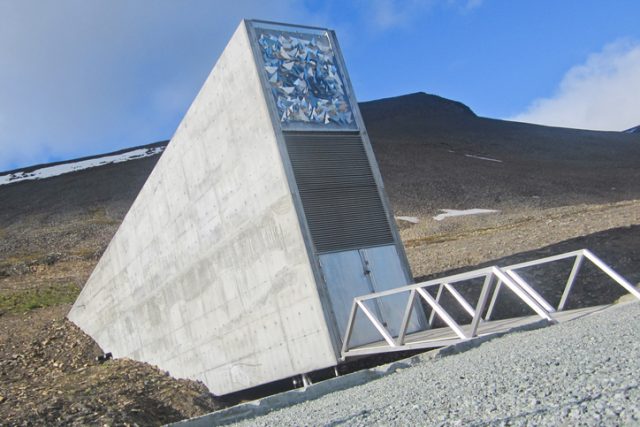 A report released by the Norwegian government in March 2019 shows that global warming is already altering the environment and weather events at the Svalbard Islands.

Five decades from now, the report suggests, the future may be grim for the region, where, ironically, a Doomsday Vault has been placed. 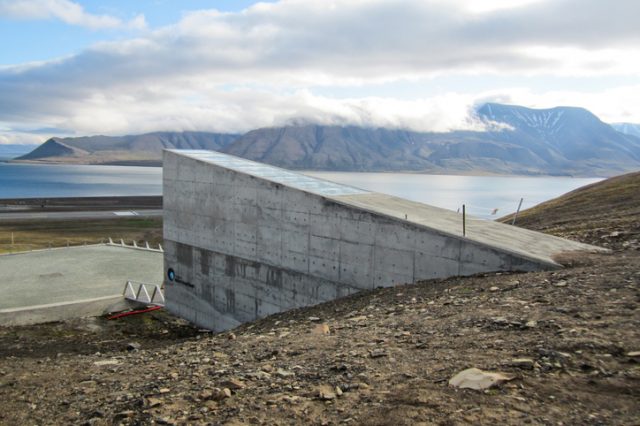 Svalbard could expect struggles with increased annual temperatures, and it is predicted that “events with heavy rainfall will be more intense and occur more frequently.”

With that will follow an array of other environmental changes such as shorter snowy seasons and increased flow of rivers, all increasing the rate of thawing of the permafrost surrounding the vault. 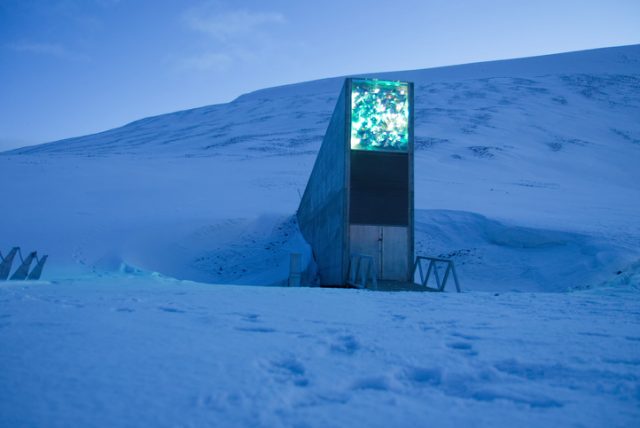 The Seed Vault represents the worlds largest collection of crop diversity in is located deep inside a mountain on the Svalbard archipelgo, halfway between mainland Norway and the north pole.

Bizarre weather has already been observed on the remote archipelago, however. Increased temperatures in the Arctic have been cited as a reason for heavy rainfalls in the region instead of snow falling.

In 2017, meltwater even managed to breach into the Doomsday Vault facility, which is designed to be impenetrable. No damage was reported on the stored seeds, but the event prompted Norway to plan improvements on the site and make it more resilient.

The Doomsday Vault, managed by the Nordic Genetic Resource Center, first opened in 2008. The storage facility is carved into solid rock some 390 feet inside the mountain, where the seeds are kept at a temperature of -18°C (-0.4°F), enough to significantly delay them from aging.

Several factors were considered before the Svalbard islands were chosen as a location for this sort of facility. The region’s permafrost, which hopefully remains abundant, helps keep the storage halls at the desired temperature. Tectonic plates are quite stable in the region, which means there is little risk of major natural disasters such as earthquakes or volcanic eruptions. 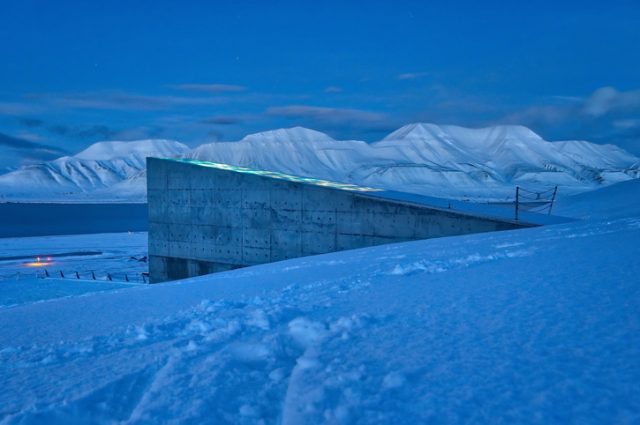 The Seed Vault represents the world’s largest collection of crop diversity. It is located deep inside a mountain on the Svalbard archipelago, Norway.

Elevated at a height of 430 feet, the site should remain dry in case of rising sea levels associated with global warming. Finally, the island is also perfect as it’s far away from any place on the planet suffering war and conflicts.

Norway’s Doomsday Vault inevitably reminds of the biblical Noah’s Ark. Eschatological stories — ones that describe the end of the world — reappear in different cultures and have different versions. 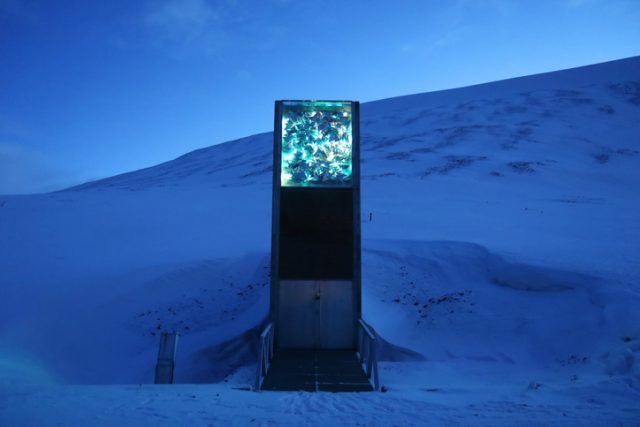 The Seed Vault represents the world’s largest collection of crop diversity in is located deep inside a mountain on the Svalbard archipelgo, halfway between mainland Norway and the north pole.

The ancient Greek version, for example, is similar to that of Noah. It says that when Zeus decided to send a flood and eradicate all of humanity, it was Deucalion, the son of Prometheus, who was instructed to build an ark, upon Mount Parnassus.

Read another story from us: The story behind London’s “Time-Traveling” Tomb

In each version of the story, life is restored on Earth as it is kept safe, preserved inside the ark until the divine deluge is over. It would be ironic indeed if things go south for the Svalbard Global Seed Vault.