The story behind London’s “Time-Traveling” Tomb

Cemeteries make natural breeding grounds for ghost stories and other fantastic tales. Usually, these fictions swell around Halloween, when a few brave teenagers visit them and scare themselves witless, then the tales fade into the ether for the rest of the year.

But Brompton Cemetery in London, England, has become the hub of a wild legend that isn’t a ghost story as much as it is science fiction. One mausoleum has become the focal point of a tale about time travel, Egyptian myths, and teleportation.

The largest tomb in the cemetery is the resting place of Hannah Courtoy and two of her daughters. According to local musician Stephen Coates, who has made something of a hobby of studying the tomb, the mausoleum may just be a teleportation chamber. It’s impossible to understand how this story arose without first understanding something about Hannah herself. 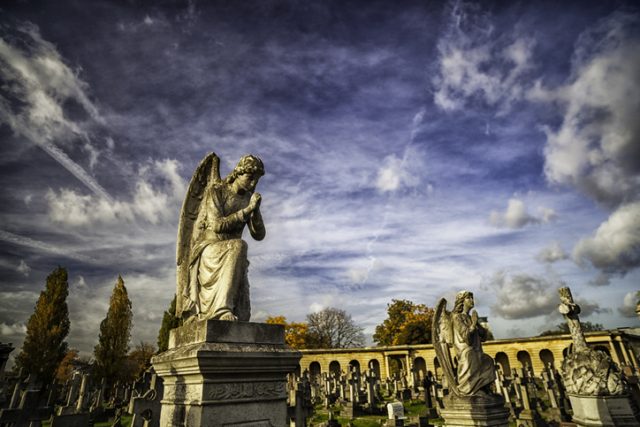 Born around 1784 (it isn’t clear exactly when), as a young woman Hannah went to work for a wealthy man named John Courtoy, as an employee of the household.

He was 70, but when Hannah gave birth to three daughters, she insisted Courtoy was the father. Although many doubted her claim and believed her to be a gold digger, paternity wasn’t provable in the 1800s.

Whatever the truth, Hannah took his name and, when he died, a huge battle began over his assets, which wasn’t settled until 1827. Hannah received the bulk of his estate. 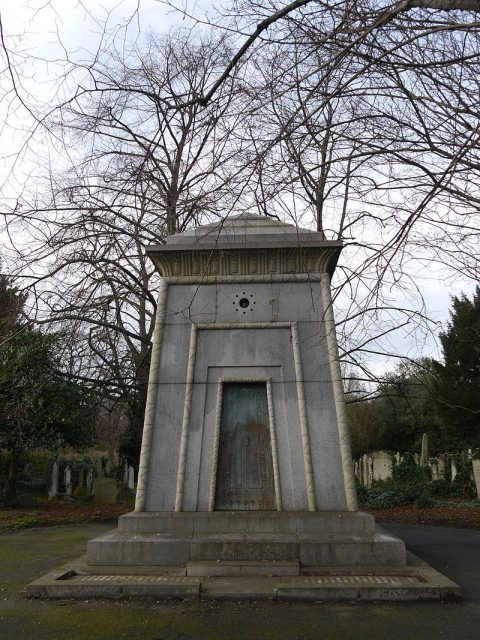 That money enabled her to indulge her fascination with all things Egyptian. She began a “friendship” with Egyptologist Joseph Bonomi, who dazzled her with stories of Egyptian iconography and astrology.

When she died in 1849, Hannah was placed within an elaborate mausoleum, one that was inscribed with hieroglyphics and other Egyptian symbols and had a pyramid shape to its top.

It also had a lock and key. The story gets truly weird when Bonomi died; his simple tombstone had a drawing of an Egyptian god that seemed to point toward Hannah’s grave — at least in the minds of those who believe there’s more to her tomb than meets the eye. But for all the speculation, the matter rested there for the following century. 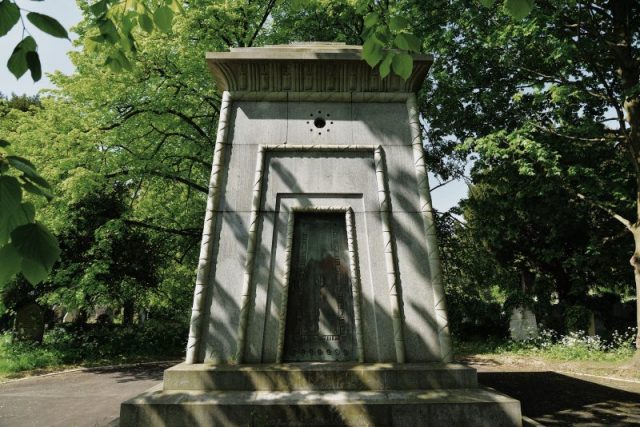 Stories abound that this tomb could house a Victorian-era time machine – or, even stranger, an occult teleportation device. Photo by Scott Wylie – Flickr CC BY 2.0

Cemeteries, however, are good places for creepy urban legends to evolve, and Brompton is no different. Almost 100 years later, one strange story is still swirling around Hannah’s tomb, thanks in great measure to its missing key.

The tale came to light when a reporter with the Associated Press wrote about the tomb in 1998. An associate of Bonomi, one Samuel Alfred Warner, wrote AP, claimed to have built a time machine and wanted it hidden in a cemetery so it wouldn’t attract attention. 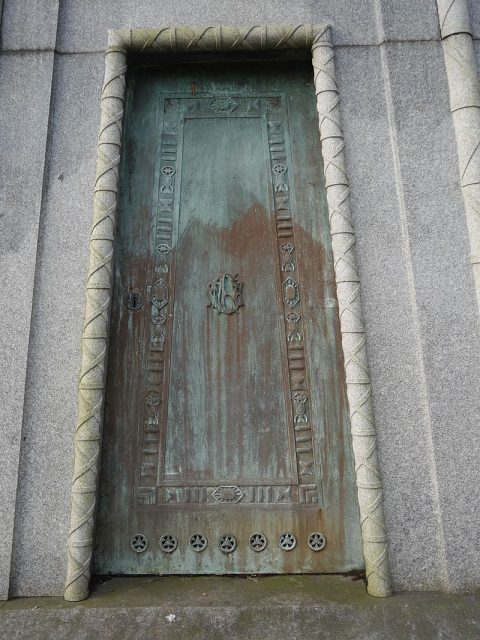 It is thought that the men were in cahoots to bilk Hannah of her money by telling her they needed funds to get the time machine built.

Over the years, the story came into the headlines, then faded away, until 2003, when local musician Drew Mulholland, used the tomb as a backdrop for an album cover, and once more the cemetery made news. The urban legend has persisted so stubbornly that the mausoleum has come to be called, the “Courtoy Time Machine.” 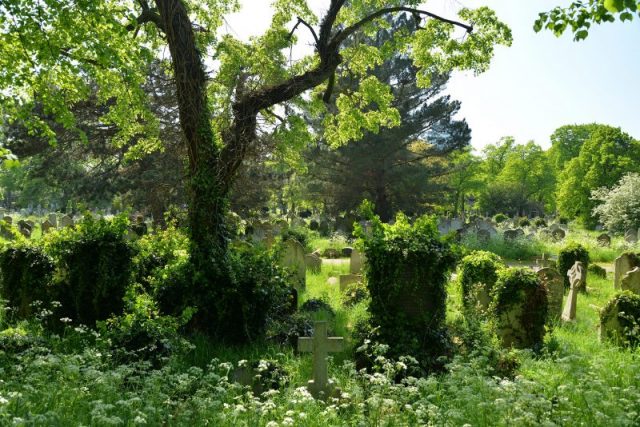 Coates, however, disagrees with this “fantastical idea.” Writing in his blog, The Clerkenwell Kid, he asserts that “In fact the tomb is one of five ‘teleportation’ chambers designed by Joseph Bonomi and built by his occult partner the Clerkenwell inventor Samuel Alfred Warner.” 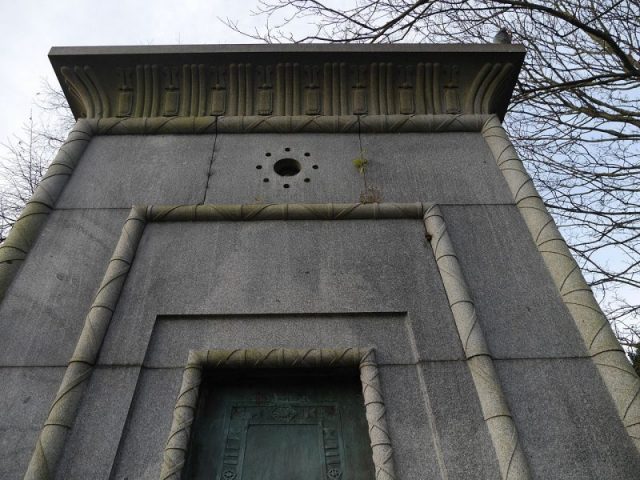 His 2011 blog article about Warner and Bonomi’s experiments with an ancient Egyptian “occult method of teleportation” reanimated public interest in the tomb and the stories around it.

But when asked directly by Mental Floss if he truly believes the story, he became coy. “It’s an alternative theory based on historical fact,” he said. But, in 2015, Coates and a descendant of Hannah, Roy Godson, told the Independent that they hope to find a way to open the tomb’s door.

Warner’s many “talents” included a gift for invention, and Coates told the Independent that, if he is somehow able to open the tomb, what he hopes to find is proof of a bomb that could be teleported a short distance, rather like “a psychic torpedo.” 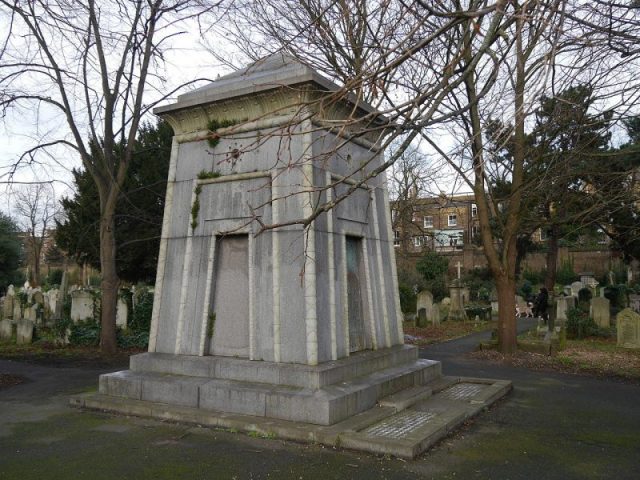 Warner claimed to have invented teleportation and managed to convince the Royal Navy that his invention had merit, at least enough to get it tested.

Alas, none of the tests supported his assertion that his machine worked. Coates hopes that, if the tomb is opened one day, it will in fact offer up the secrets of Warner’s labors.

Not everyone believes tales of time machines and teleporters, of course, but most think it’s all good fun – and good for business. Robert Stephenson, a Brompton Cemetery guide, told the Independent in 2015 that several of the mausoleums there are missing keys; there’s nothing odd about Hannah’s missing one. 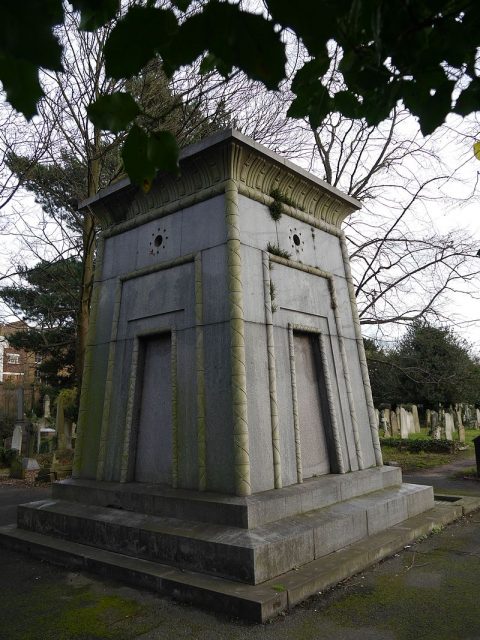 No one really knows the true story of Hannah, Bonomi, and Warner and how, or even if, their lives intersected. Photo by Edwardx CC BY-SA 4.0

He also said that the story brings attention to the cemetery and he enjoys it. “But,” he added with classic British understatement, “I wouldn’t say I was totally behind it.” Nor are Hannah’s descendants convinced that any of the stories are credible.

Ray Godson said during the same interview that, although he would find it nice, he doubts the tale’s validity. One individual, Vanessa Woolf, a self-described professional storyteller, loves the whole idea of the tomb’s history – which is not the same as saying she believes it.

Ever since she learned of it in 2015, Woolf has hosted presentations at the site to inform audiences about the legend. She told Mental Floss that she describes Warner as a “barking mad” inventor during her sessions, which she has led many times since 2015, after connecting with Coates. 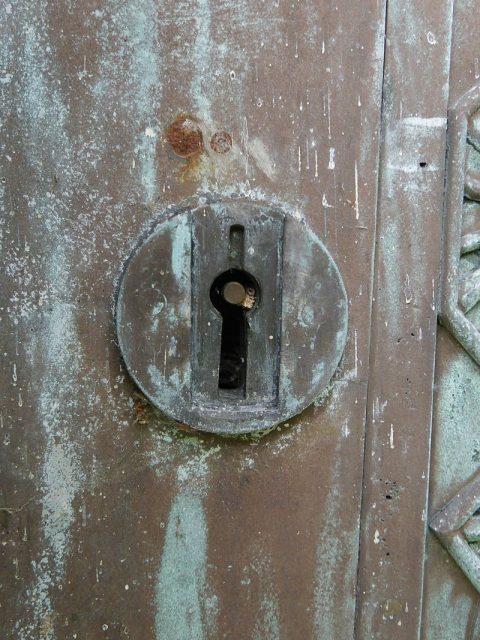 The mysterious tale continues to intrigue listeners, thanks in great measure to its missing key. Photo by Edwardx CC BY-SA 4.0

She says that Londoners are intrigued by the story and like knowing more about the fabric of the city. She, for one, doesn’t look forward to the tomb being opened.

“It’s much nicer, in a way, not having it (the key). It’s really in the minds of the audience. It’s a slab of rock. The real magic is in their minds.” Indeed, no one really knows the true story of Hannah, Bonomi, and Warner and how, or even if, their lives intersected.

Read another story from us: Tomb of King Tut Finally Reopened after a Decade Spent Repairing Tourist Damage

Hannah and the two men took those secrets to their graves. However, the tomb stands in mute testimony to Hannah’s interests. Whether there is a time machine or teleportation device in there seems highly dubious – but the idea will no doubt continue to tantalize imaginations.