The mythology behind Game of Thrones White Walkers

The eighth and last season of Game of Thrones appears poised for a final showdown among not only the main characters of the show — Jon Snow, Tyrion Lannister, Daenerys Targaryen, Cersei Lannister, Jamie Lannister, and the surviving Stark siblings — but between the living and the dead: the White Walkers.

In the fantasy world created by George R. R. Martin, the White Walkers are an ancient race of humanoid ice creatures who come from the Far North of Westeros. Some 8,000 years before the books begin, the longest winter in history descended and lasted an entire generation. It was only after a terrible war that humans ended the Long Winter. 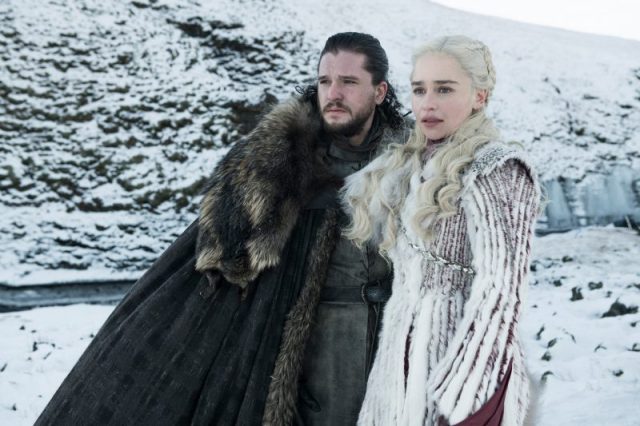 The Wall and the Night Watch brothers were created to guard men from the return of the White Walkers. At Winterfell, the farthest north of the seven kingdoms, the Starks take the threat far more seriously than anyone else, as do those who serve them. “Winter Is Coming” is an apocalyptic warning.

Nan, the Starks’ oldest servant, tells Bran Stark in Season One, “Fear is for the long night when the sun hides for years, and the children are born and live and die in darkness. That is the time for fear, my little lord, when the White Walkers move through the woods. Thousands of years ago there came a night that lasted a generation. Kings froze to death in their castles same as the shepherds in their huts.” 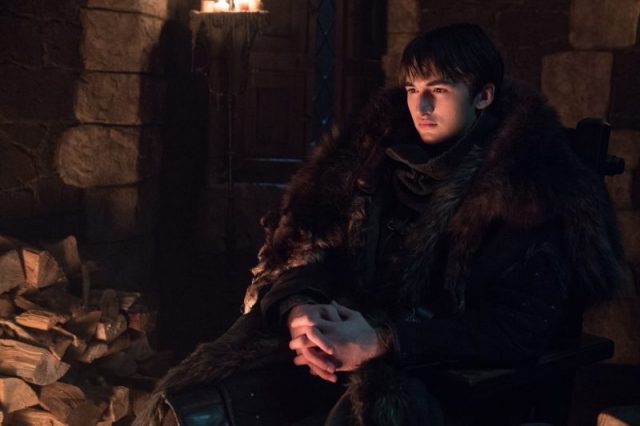 For those GOT fans who remember the HBO series’ beginning, the terrifying beings north of The Wall posed a threat since Episode One. In it, three Night’s Watch rangers discovered a group of dead north-of-the-wall humans called wildlings.

Two of the rangers were ripped to pieces by the White Walkers who had killed the wildings, and the third fled south of The Wall — which led to his execution for desertion by Ned Stark (Sean Bean), the star of the first season.

Some Game of Thrones insiders say the end of the series brings meaning to all of the many mysteries of Martin’s world.

Nikolaj Coster-Waldau, who plays Jaime Lannister, told The Wrap last July that “all the pieces fit into this massive jigsaw puzzle. I mean, when I read it — I’ve spent so many years working on this and been guessing and trying to figure out how this will end — and when I read it, some of the parts of it I’d get, and other parts of it were just completely shocking and surprising.” 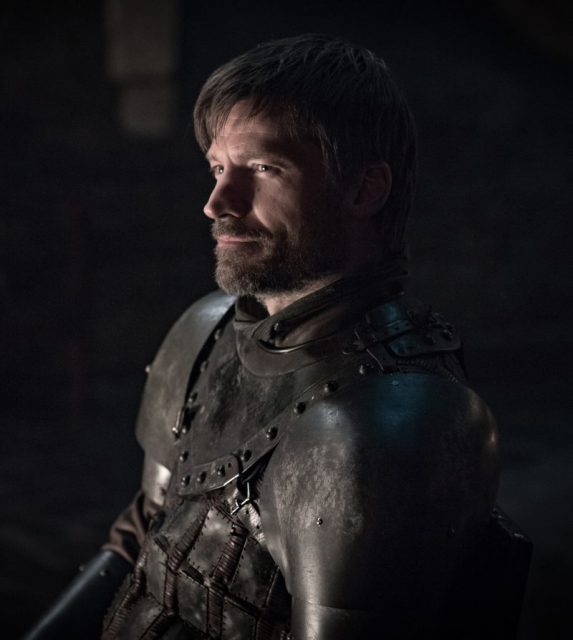 While there has been much written about the medieval origins of Game of Thrones, and how Martin made use of the Wars of the Roses to write the battle for power among the various families, the inspiration for the White Walkers is less certain.

There is a strong zombie element to their creation since the dead are reanimated as foot soldiers for the White Walker army.

But also Martin may have drawn on Celtic, Scandinavian, and Germanic myths to form this aspect of Game of Thrones. It is one of his strongest fantasy elements. 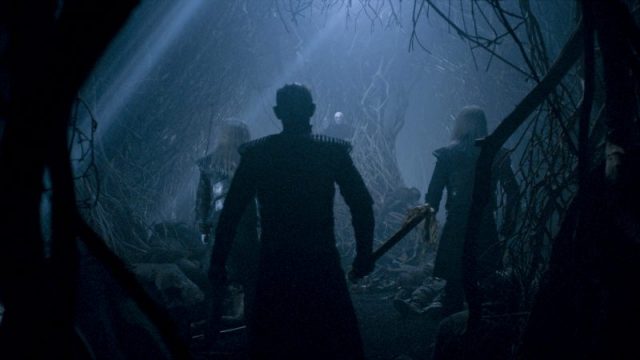 In one of his few comments on the White Walkers, Martin said, “They are strange, beautiful … think of Sidhe made of ice, something like that … a different sort of life … inhuman, elegant, dangerous.”

Picking up on this clue, Sidhe are an ancient supernatural race similar to fairies and elves that appear in Irish and Scottish mythology. “The belief in the Sidhe is part of the pre-Christian religion which survived for thousands of years and has never been completely wiped out from the minds of the people,” said The Celtic Society.

According to the site Winter Is Coming, “The Sidhe are said to live in unknown lands across the sea, underground in fairy mounds (‘aos si’ means ‘people of the mounds’ in Irish) or an alternate world connected by various means to the world of humans. Martin’s White Walkers are similar in their distant origins (far North) and their movement between regular space and time, as when the Night King interacted with Bran Stark in the latter’s greensight visions.” 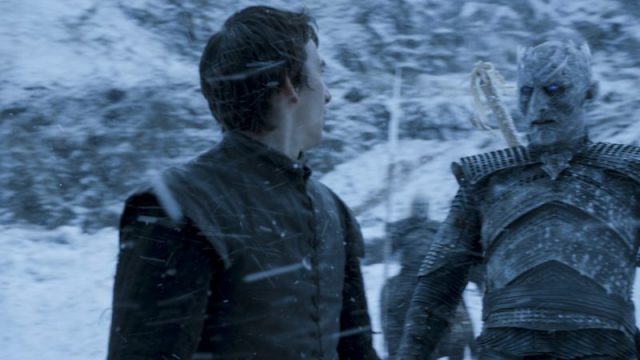 In Scottish mythology (where they are called the daoine sith), these folk are described as natural spirits but also as ancestors and gods.

Some observers see elements of the Wild Hunt in the White Walkers, a motif appearing in much European folklore. It is a stormy procession of ghostly or supernatural huntsmen passing across the winter sky in pursuit of game.

The leader (generally referred to as “The Hunter”) is believed to be associated with the Norse god Odin, the Devil, or a number of other mythological figures.

“The Wild Horde appears in the deepest, darkest and coldest reaches of midwinter, and its single leader, like the Night King, has great supernatural powers,” says Winter Is Coming. 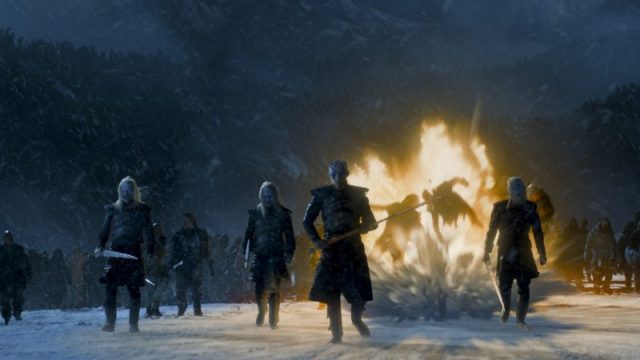 In other mythology, riding down from the heavens, the Old Norse Valkyrie (from the Old Norse valkyrja for “chooser of the slain”) are a host of female warriors who descend to earth to resurrect half the dead human warriors from the battlefield and carry them to Valhalla. The fairest Valkyrie has white skin.

No matter their origins, the White Walkers have a fearsome leader in the Night King. In the previous season, he killed one of Danny’s dragons, turning it into a zombie battle creature after its corpse was dredged from a deep lake. (And leading to dozens of memes asking how in a battlefield resembling Antarctica they managed to find the chains.) 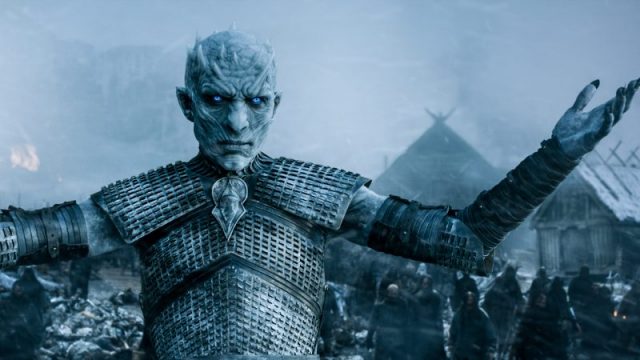 The theories about the White Walkers have become frenzied in the last several months, with speculation that the Stark family is connected by bloodline to the Night King. Bran Stark is a particular focus of this theory.

Perhaps the wildest theory is that ultimately it will be revealed that the White Walkers are the good guys, which makes the humans … the bad guys.