The river Seine is an intriguing combination of romanticism and the macabre. It’s located in Paris, one of the most lovestruck cities in the world, yet it also carries a reputation for dredging up corpses.

Establishing what happened to someone who perished in the water can be a tricky business. It isn’t the most dignified way to make an exit. Yet for one beautiful young woman, her demise formed the basis of a romanticized industry which ironically ended on a life-saving note.

The Unknown Woman of the Seine, or L’Inconnue de la Seine, is believed to have died “sometime in the 1870s or 1880s”, according to a 2009 Mental Floss article. 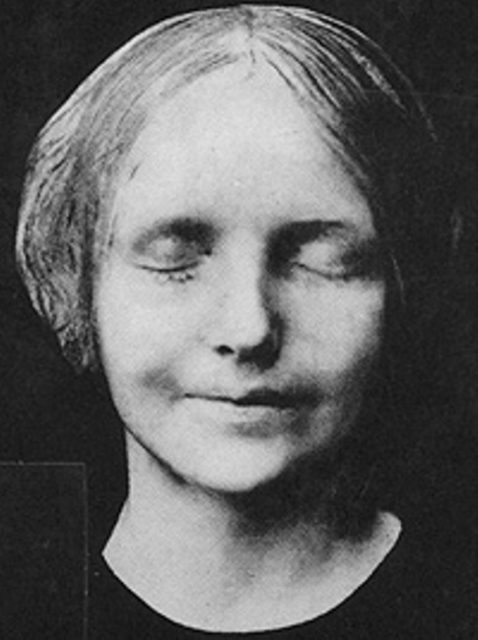 She appears to have been treated in the same fashion as any body dragged out of the murky depths. The disturbingly matter-of-fact routine was to publicly display the corpse on one of 12 black slabs in a mortuary window. This served a practical purpose of course, as it was hoped someone might put a name to a water-logged face.

However, there was a grotesque side to proceedings, with crowds getting a thrill from seeing who was on the slab that week. It was in the context of morbid entertainment that the legend of the Unknown Woman was born. A “death mask” or plaster cast was made, supposedly because the pathologist was taken with her visage. 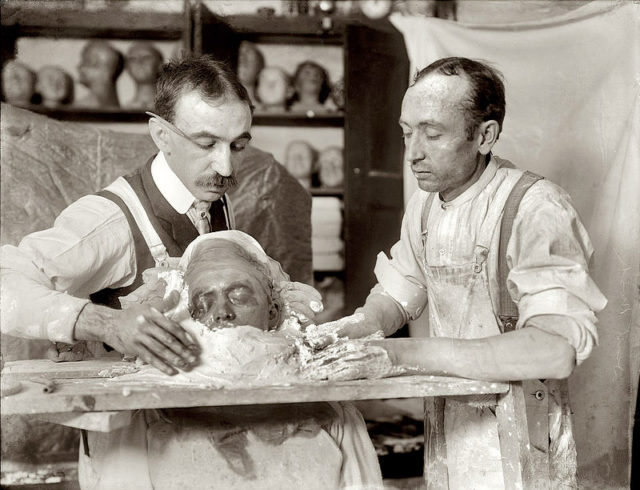 Two men in the process of making a death mask

“She has a pleasant, attractive face, with the hint of a smile playing on her lips,” BBC Magazine wrote in 2013. “Her eyes are closed but they look as if they might spring open at any moment. Hers is the one mask that has no name.”

This enigmatic nature has led to her being alternately described as the “Mona Lisa of the Seine”. And like Da Vinci’s mystery woman, her identity has been mulled over for centuries. Copies of the sentimentalized mask were circulated in high society and beyond. The enchanting face hung from every wall. 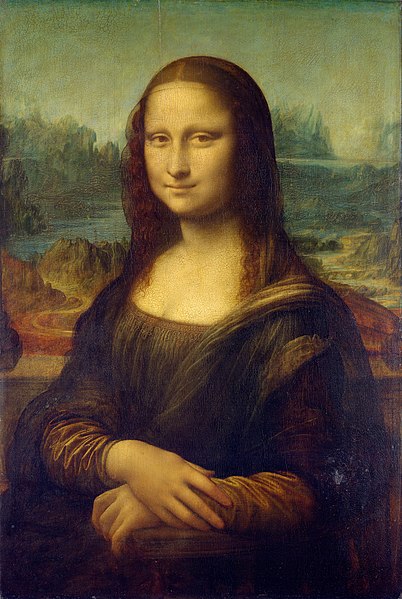 Like the Mona Lisa, Da Vinci’s mystery woman, her identity has been mulled over for centuries

Some observations about her border on the absurd. In 2007 The Guardian noted “The French philosopher and literary theorist Maurice Blanchot, who had the mask in the main room of his house on the Côte d’Azur, felt she must have died ‘in a moment of extreme happiness’.” Albert Camus, Vladimir Nabokov and Man Ray were just some of the illustrious names bewitched by her heavily-fictionalized spell.

1899 novella The Worshipper Of The Image was inspired by the L’Inconnue de la Seine and took the story into a literary dimension. Written by English author and poet Richard Le Gallienne, it tells the tale of “a young poet” who “shuts himself away with the mask in an isolated cottage in the woods. He has heard that the man who made the mask fell so much in love with the dead woman that he drowned himself in the Seine.” 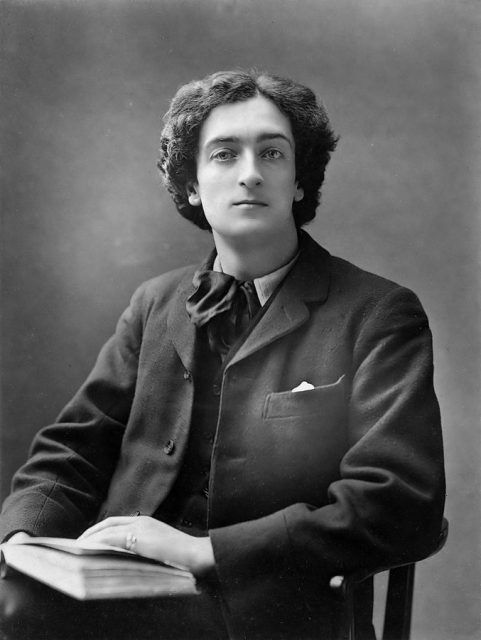 A similar fate awaits the foolhardy romantic, who loses his mind and his family in the ensuing tragedy. “All he wants is for the mask to open its eyes, but when it does a moth emerges from her mouth with the face of death between its wings.” For Le Gallienne, the beautiful mask concealed a horrifying nightmare.

The plaster was originally thought to have been cast at the Lorenzi workshop, whose descendants continue the craft today. Its location was described as “a small haven of peace and antiquity in the busy Parisian suburb of Arcueil” by BBC Magazine. The article adds that “it’s the last of its kind.”

As for what kind of person the Unknown Woman was, no-one knows for sure. Though there is a consensus that she isn’t what she appears. “Look at her full, rounded cheeks, her smooth skin,” commented Lorenzi descendant Claire Forestier to The Guardian, “this is certainly not a drowned woman, fished from the water. It would be impossible to take such a perfect face from a dead woman.” 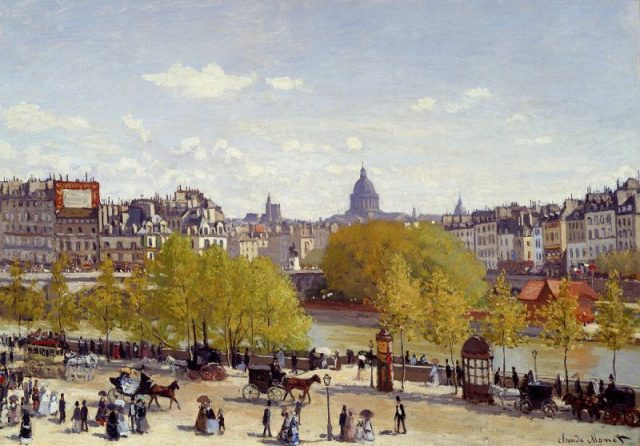 Quai du Louvre by Claude Monet, c.1867. The place where the Unknown Woman is said to have been pulled from the Seine.

The BBC remarks that “Even suicides fight for life at the last moment and their faces betray that struggle… the process of decomposition starts much more quickly in water too.” So it’s safe to assume that no matter how attractive the victim, a period in the Seine would have had a noticeable effect on their looks.

Whether those fished from the Parisian depths are innocent or otherwise, interest in them is always high. The Guardian writes that the river police “inspire fascination… and often appear on television discussing their work. Last year, 50 corpses were retrieved from the Seine’s murky water… Around 90 people attempt suicide in the river each year; roughly 70 are saved.”

It seems this Mona Lisa-like case is a something of a one off, albeit giving rise to a welter of stories which present her as everything from a wide-eyed country girl to a variation on Shakespeare’s Ophelia. 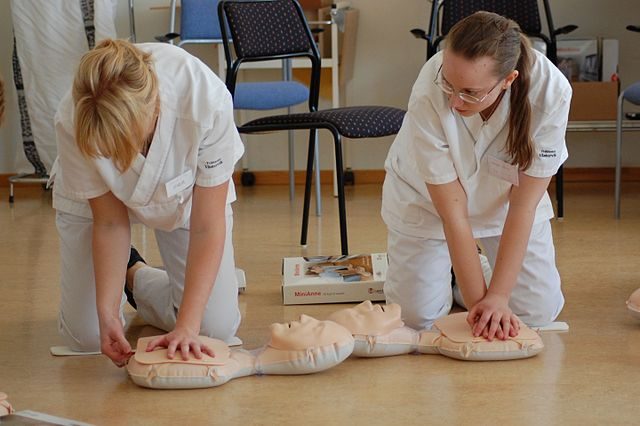 But there is one way she lives on that brings hope amongst the rose-tinted misery. The death mask has breathed life into various individuals, or rather had life breathed into her. This is due to CPR — CardioPulmonary Resuscitation. In this incarnation she even has her own brand name: Resusci Anne.

This is “the world’s most famous life-sized doll, and also the most kissed woman in the world.” Such a bizarre accolade has been earned alongside a strong track record in saving lives. “More than 300 million people have embraced her lifelike form to learn mouth-to-mouth resuscitation” since her creation in the 1960s.

The doll was the work of Asmund Laerdal, a toymaker from Norway who had previously revived his young son and was given the job of making something that could be used to train people in CPR. As BBC Magazine writes, he felt “that a female doll would seem less threatening to trainees” and recalled “a mask on the wall of his grandparents’ house many years earlier.”

Read another story from us: The story behind London’s “Time-Traveling” Tomb

The reasons behind the Unknown Woman’s fate will probably never be known. Some speculate her serene quality was provided by a living model, meaning the whole thing was an elaborate deception. Even so, she has taken on a life of her own. And while there has been a lot of money made at her expense, she also became a positive symbol for those in need of help in the direst of circumstances.