We all love getting lost in the pages of a good book. But what many agree on is that the HBO adaptation of George RR Martin’s epic series A Song of Ice and Fire is a huge success. On April 14, 2019, the final season of A Game of Thrones will premiere, tying up all the loose ends that fans have been wondering about for years.

GOT doesn’t pull its punches when portraying the complex and often brutal events in the books. In addition, the sets and costumes are crafted with intricate detail, and the locations are carefully chosen to be as close as possible to the fictional realm they represent.

Below we take a look at some of the places where the series was filmed. 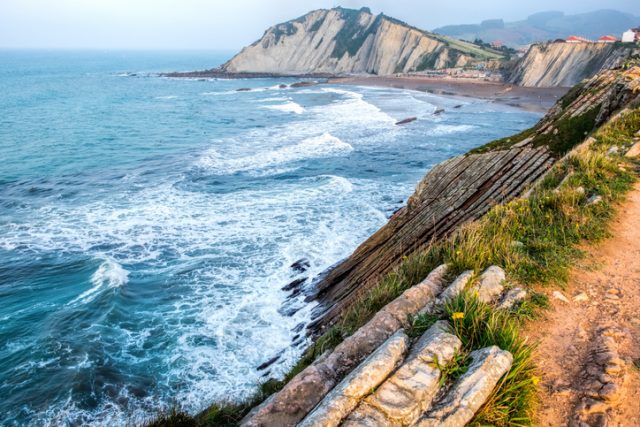 The town of Zumaia has two small beaches: Santiago and Itzurun. It’s the latter beach that was used as the shores of Dragonstone, where Daenerys sets up her army in anticipation of conquering the rest of Westeros. 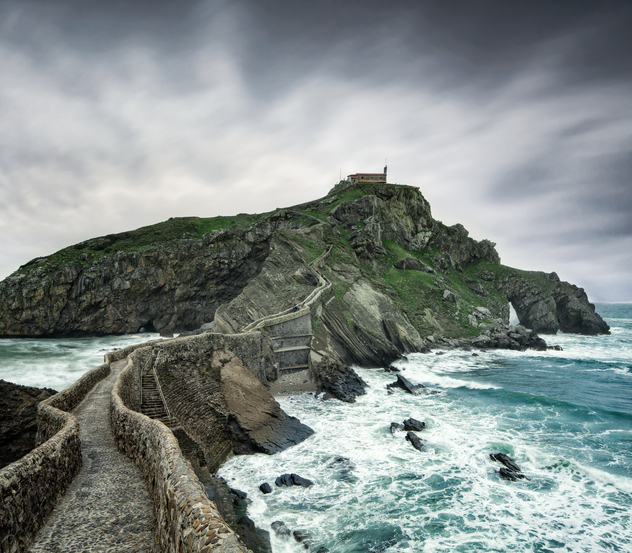 With the addition of a digital castle at the summit, this little islet on the coast of Biscay makes a very convincing Dragonstone. Its name translates as “the craggy fort,” and it certainly provides an ideal location for the island stronghold from the books. 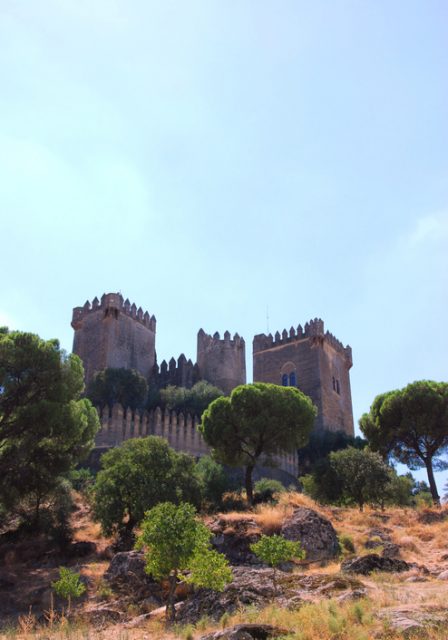 Highgarden is the verdant seat of the affluent House Tyrell, and Castillo de Almodóvar del Rio was chosen for this location.

The castle was originally a Roman fort although the current structure is of Moorish origin and underwent renovation and reconstruction in the Middle Ages and later. 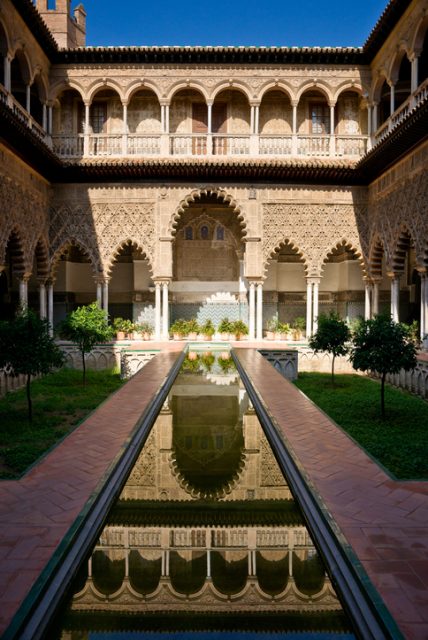 The lower level of the Patio was built for King Peter I in 1364 as a royal residence. The name “Courtyard of the Maidens” (Patio de las Doncellas) refers to the legend that the Moors demanded 100 virgins every year as tribute from Christian kingdoms in Iberia

Seville is the perfect setting for Dorne, and Alcázar is ideal as the Dornish palace, home to House Martell. 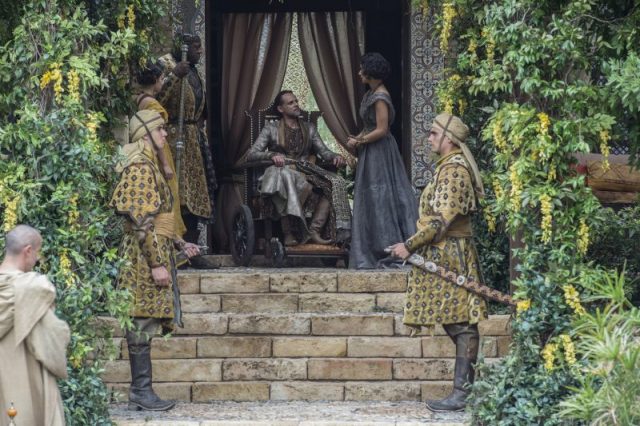 Photo by Macall B. Polay/courtesy of HBO

Dorne is the southernmost land in Westeros, so this hot but beautiful location fits the bill nicely. 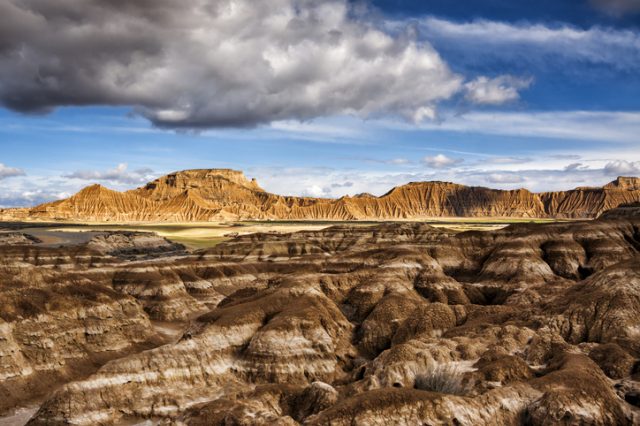 Just to prove that Spain has nearly all of the settings and climates you could want for the Game of Thrones series, the badlands in southeast Navarre are used to represent the land inhabited by the warlike Dothraki.

Seeing the sands of the Bardenas stretching in all directions, it’s easy to imagine that Vaes Dothrak might be just over the next horizon (although, in the show, Sandy Brae in Northern Ireland was used as the setting for the capital of the Dothraki people). 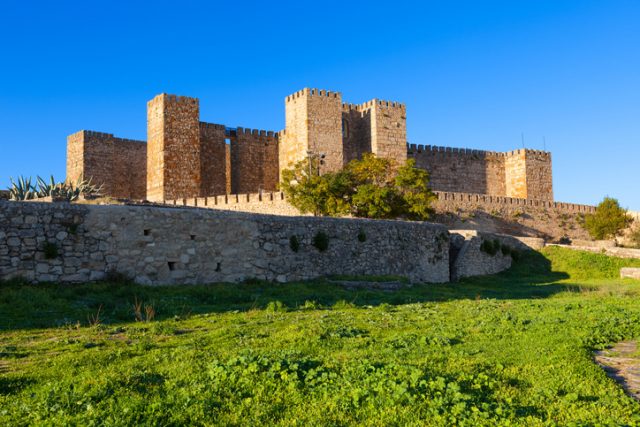 Trujillo, Spain – November 5, 2014: Castle of Trujillo, a medieval village in the province of Caceres, Spain

From the Dothraki Sea to the stronghold of the most influential family in Game of Thrones, Spain can also boast that one of its castles was featured as Casterly Rock.

Although Martin has been quoted as stating that the Rock of Gibraltar was his inspiration for the Lannister stronghold, it was actually Trujillo Castle in Cáceres that was seen to be most fitting as the home of Tywin Lannister and his family. 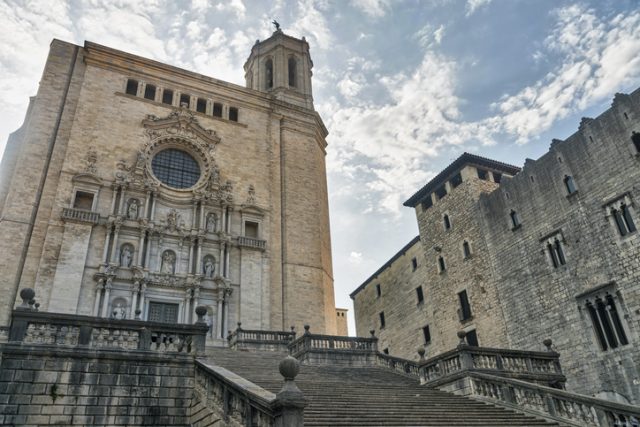 Everyday Girona might make up the streets of Braavos, but the city’s fabulous Gothic cathedral has a more important function. In season six, it was the exterior of the Great Sept of Baelor in King’s Landing. 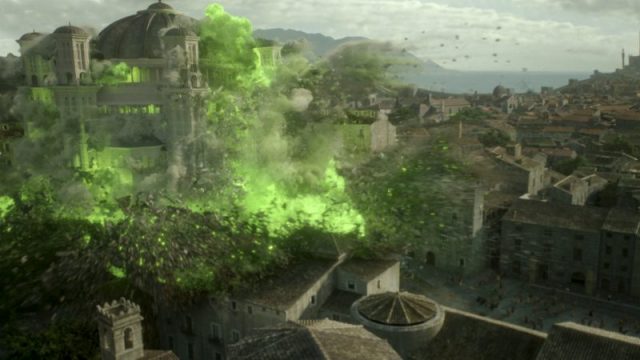 Stand at the bottom of the steps and try to imagine Jamie Lannister cantering up them on his white horse to rescue Margaery from her walk of atonement. 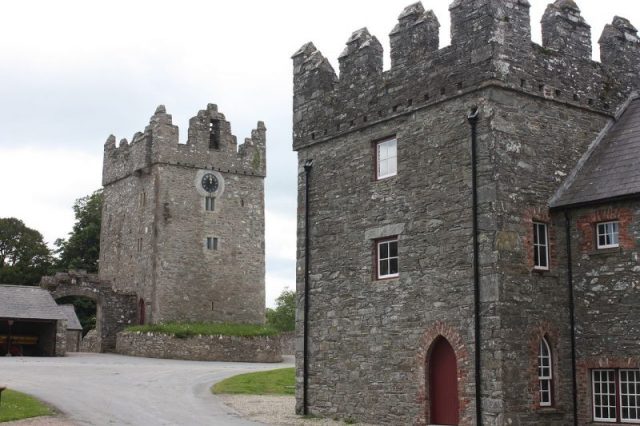 Anyone who wants to feel part of the Stark clan should head to Stangford’s Castle Ward and Castle Towers which have been part of the setting for Winterfell from season one.

Of course, no one location could live up to all that is demanded from the northern stronghold of Winterfell, so only some of the scenes are filmed at Castle Ward. 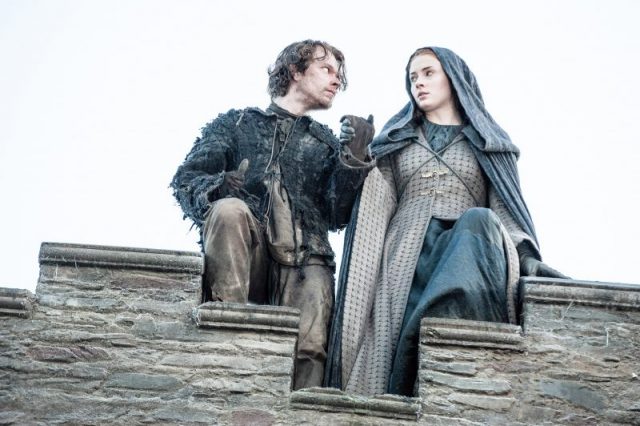 Photo by Helen Sloan/courtesy of HBO

Others are filmed at Doune Castle in Scotland, which is no stranger to filming, having been used as a location in Monty Python and the Holy Grail.

While Winterfell is isolated and bleak, these two castles are actually rather pretty and easily accessible in real life, making them the perfect tourist destinations.

The same is true of Ballintoy which is the setting for the Iron Islands.

The seven islands that make up Theon Greyjoy’s birthplace are barren and unforgiving, breeding ruthless Ironmen. However, Ballintoy is actually a rather charming Irish location with a plaque in the harbour to mark its use as a location on the HBO show. 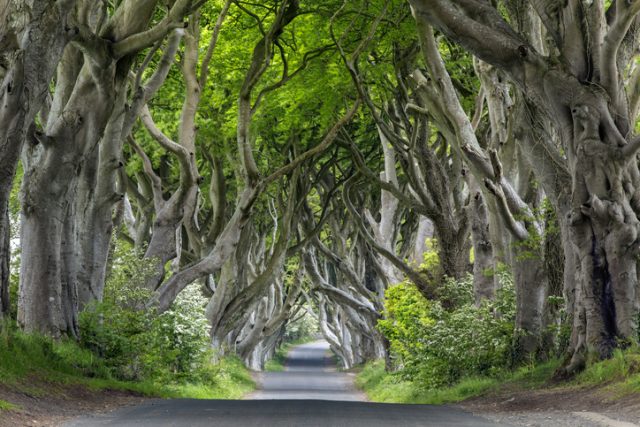 This avenue of trees with a strangely sinister name was turned into the Kingsroad for the series, and we see it when Arya tried to travel along it disguised as a boy. It is certainly an ethereal location. 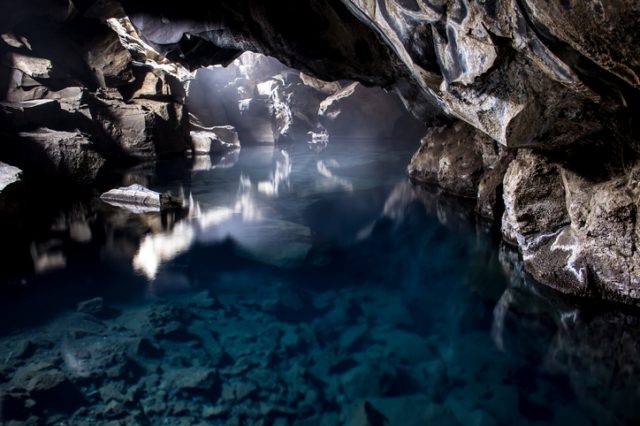 Those audience members who rooted for Jon Snow and Ygritte will remember the touching scene in a thermal spring where they enjoyed a moment of happiness.

That scene was filmed in the lava cave at Grjótagjá which has now become immensely popular with visitors, some of whom are perhaps trying to steal their own moment of romance in the warmth of the spring. 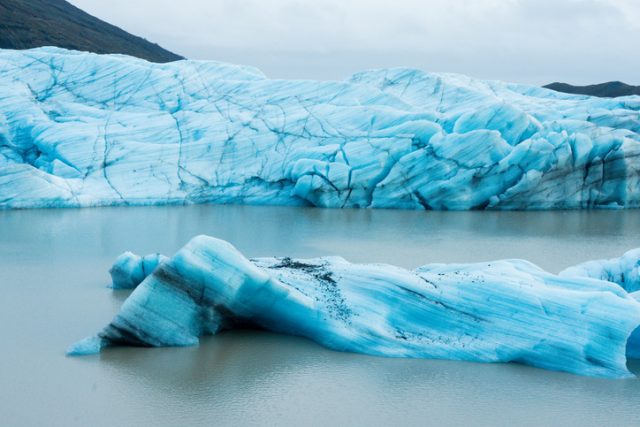 The lands Beyond the Wall, the home of Wildlings, is a barren and cold place. The production team clearly thought that these three glaciers epitomized the Fist of the First Men.

Vatnajökull is the largest glacier in Iceland, making it an ideal representation of the snowy wastes beyond the Wall. 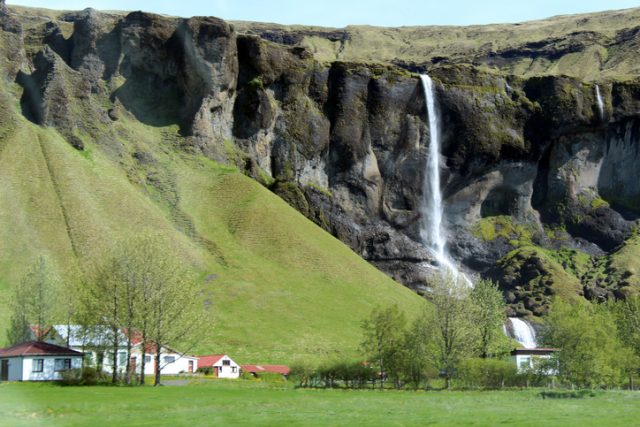 The film crew didn’t have far to venture for their next location. Vatnajökull glacier lies just north of the village of Vík í Mýrdal. The village’s distinctive beaches made up of black sand were used to film scenes for Eastwatch-by-the-Sea. 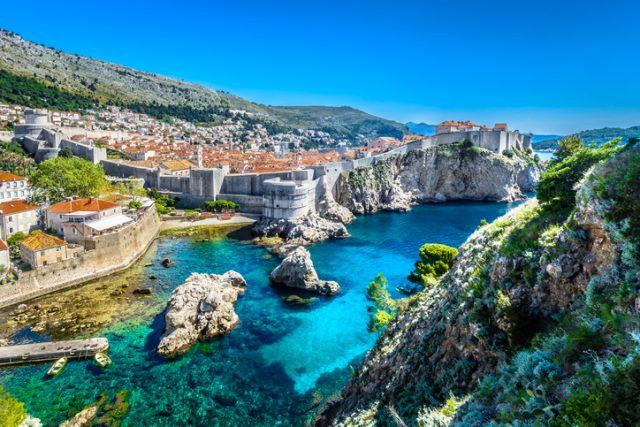 Spain’s Girona Cathedral might be the Sept of Baelor, but the way to it, through King’s Landing, is found in Dubrovnik. The terracotta roofs add just the right ambience to conjure up this imaginary city. The twisty streets of the old part of the town feature heavily in the show and are especially key in season five where Cersei undertakes her walk of shame. 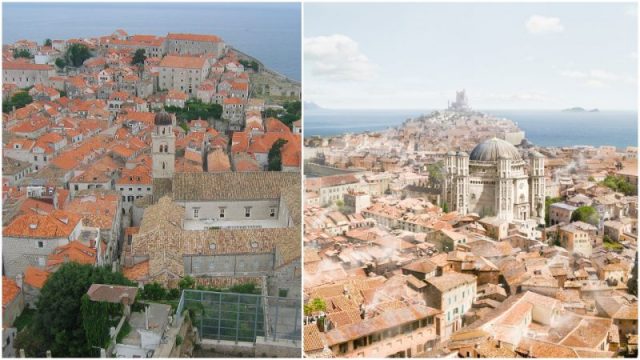 Another part of Croatia which depicts a section of Kings Landing is this arboretum which acts as the palace gardens. Walking through the hanging vines, you can almost imagine you’ll come across Lady Olenna and Margaery whispering in a corner.

Read another story from us: The mythology behind Game of Thrones White Walkers

So, if your holiday this year takes you to one of the countries above, why not detour and step into a world of fantasy and dragons (dragons not guaranteed)?