Antarctica’s red waterfall is a mysterious thing to behold. There’s no shortage of snow-bound horror movies that hint at terrible things (or at least, The Thing) lurking beneath the ice. Since its discovery in 1911 by the Australian geologist Thomas Griffith Taylor, Blood Falls has evaded easy explanation. In 2017 however the mystery was finally solved.

A gushing spout of crimson saltwater cascades down from the tongue of the Taylor Glacier (named in honor of its discoverer) and onto the ice-covered West Lake Bonney, less than 100 kilometers (65 miles) from the US research center McMurdo Station. 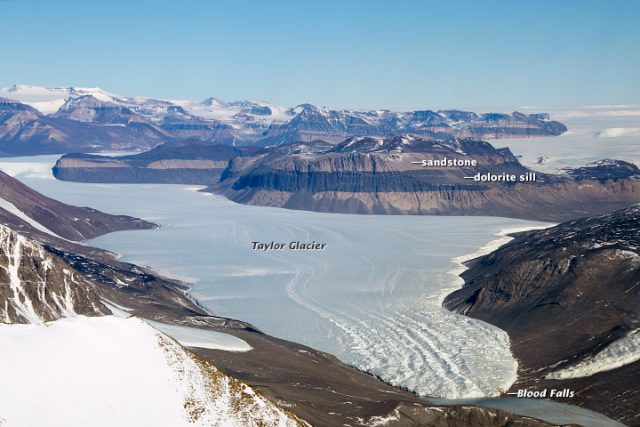 Blood Falls at the toe of Taylor Glacier, 2013

Taylor, who visited the region with the doomed Terra Nova expedition of Captain Robert F. Scott, theorized that the sinister coloration of the water was due to the presence of red algae. Although untested, this theory remained the most likely explanation for the best part of a century. Taylor was present for the 1911 trek only and in 1915 he described setting eyes on Blood Falls for the first time:

“I slid down the steep eastern face of the Riegel [exposed ridge of bedrock], where King Frost had gnawed away the cliff and built up a steep ramp of talus [pile of rocks at the base of a cliff], and reached the channel connecting the two parts of Lake Bonney. This was 20 feet deep and filled with water, of which only the top six inches was frozen. Large laminae of dull green algae covered the bottom of the lake, and just at the snout of the glacier a bright red alga lent an unusual touch of color.” 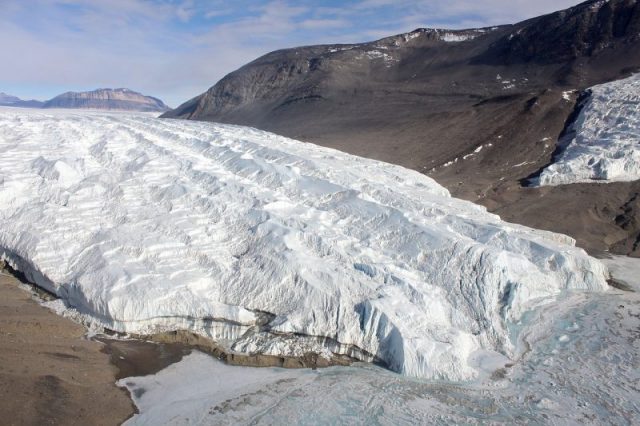 The Terra Nova expedition ended in 1913 with the demise of five members of the team (including Scott). According to Forbes, recent research by the University of Alaska Fairbanks revealed that the red color is due to the oxidized iron in brine saltwater. This is the same process which causes iron to turn red as it rusts. The iron in the saltwater comes into contact with oxygen as it churns, effectively dying the waterfall an eerie and chilling red.

The iron-rich saltwater is drawn from beneath the Taylor Glacier, and the researchers used radio-echo sounding (RES) to measure the landscape hidden as far as 1,150 feet beneath the glacier.

Saltwater has a greater density than freshwater and the RES scan exposed a ‘lake’ beneath the glacier which has picked up iron from the bedrock. As the glacier expanded towards the sea, it rolled over the lake and trapped it like an air pocket in shrinkwrap. 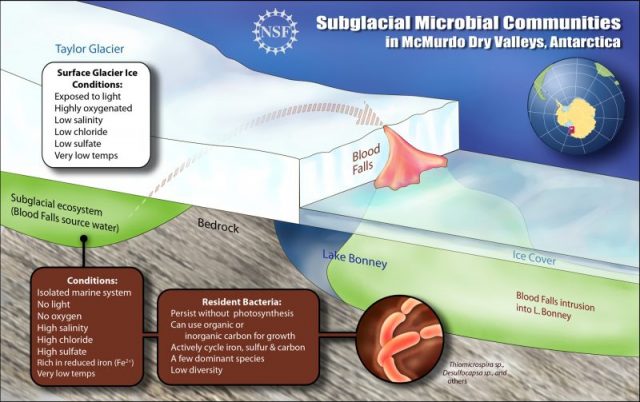 A schematic cross-section of Blood Falls showing how subglacial microbial communities have survived in cold, darkness, and absence of oxygen for a million years in brine water below Taylor Glacier

The iron-rich saltwater makes its way through fissures, forming channels in the glacier over a period of 1.5 million years. The lake water is forced by the pressure of the glacier above towards areas of lower pressure — finally bursting free at Blood Falls. Saltwater freezes at a lower temperature than freshwater (which is why roads are salted when it snows), which creates the bizarre phenomenon of running water slowly but surely flowing through a dense column of ice. 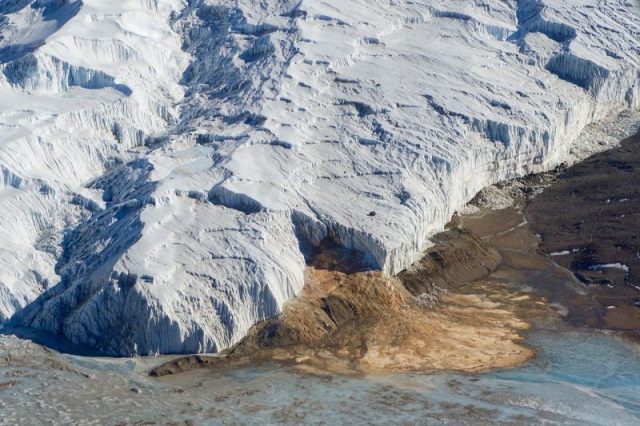 Blood Falls in the McMurdo Dry Valleys in Antarctica, as seen on November 11, 2016

Antartica’s bleeding glacier may be amazing but it’s hardly uncanny. However, in solving this geological mystery, scientists are able to consider an even greater one: the possibility of life on Mars.

For an estimated 5,000 years, Blood Falls, Antarctica’s red waterfall, has been home to microbes that can survive in the extreme cold and pressure beneath Taylor Glacier. These tiny lifeforms live off sulfates in the water, which they use to produce energy in the absence of oxygen. Microbial communities like these can help us to understand how life formed on Earth before oxygen was present in the atmosphere, as well as how life could develop on other planets without access to oxygen. It may seem like an oxymoron but this area of Antarctica is the coldest and driest desert on Earth and these conditions are not dissimilar to the subzero deserts on the surface of Mars. 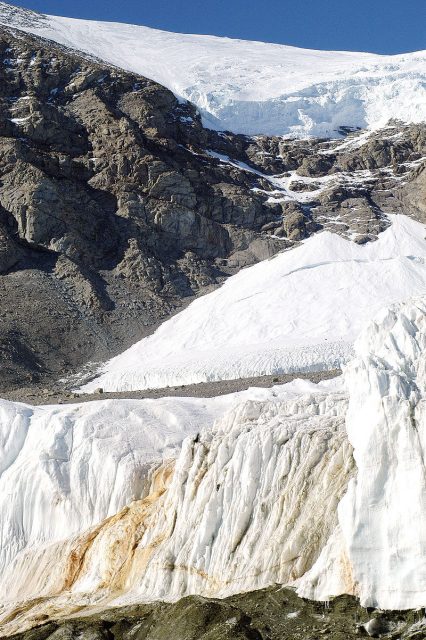 The McMurdo Dry Valleys, where Blood Falls can be found, are a series of parallel valleys between the East Antarctic Ice Sheet and the Ross Sea. A near constant cold, dry wind — katabatic wind — rolls downhill from the high altitudes of the ice sheet and strips the surface of snow and ice. These unique conditions leave in their wake only exposed rock and the mysterious frozen lakes like West Lake Bonney.

Read another story from us: Earth has Another Continent Called Zealandia – Only 6% of it is Above Water

By studying the complex networks of primitive life that have shrugged off the cold, the darkness, the lack of oxygen, and the immense pressure of Antarctica’s red waterfall in order to survive, scientists hope to understand how alien life might have clung to the inhospitable conditions of the Red Planet, perhaps thriving still beneath its unforgiving canals and valleys.