The Greatest Dog Devotion in Hollywood History – Valentino and Kabar

The bond between humans and dogs is ancient and strong. Anyone who has ever owned a dog knows full well about the deep ties that can form between a person and their canine companion. And this was no different for Rudolph Valentino and his dog, Kabar.

Rudolph Valentino was a movie actor in the 1920s. Known in Hollywood as the “Latin Lover”, he starred in numerous films before his untimely death from peritonitis at the age of 31. He was so popular that his end caused mass hysteria among his fans and perpetuated his status as a film icon. To this day, the name “Valentino” is associated with someone being handsome, debonair, and suave. 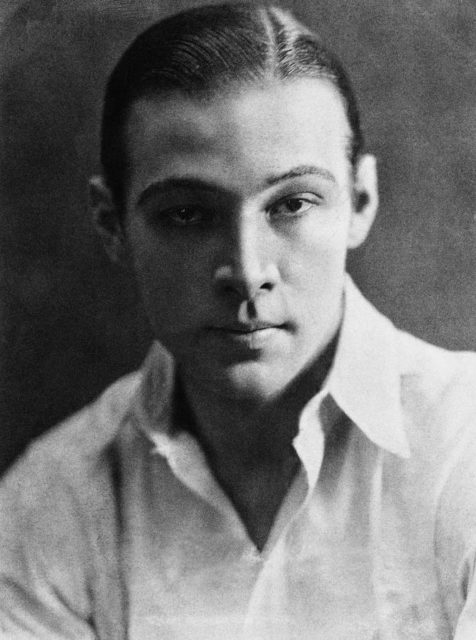 According to boxer Jack Dempsey, who had trained Valentino in the sport, “he was the most virile and masculine of men. The women were like flies to a honeypot. He could never shake them off, anywhere he went. What a lovely, lucky guy.”

Valentino was born in Italy in 1895 to an Italian father and French mother. He arrived in the US in 1913 at the age of 18 and found work doing odd jobs. He was eventually hired to dance the tango with Joan Sawyer in a restaurant, and soon found work dancing at Maxim’s Restaurant-Cabaret.

But he left New York after a relationship with an unhappily married woman caused much scandal, and made his way to Los Angeles, where he continued to dance and to teach dance classes. 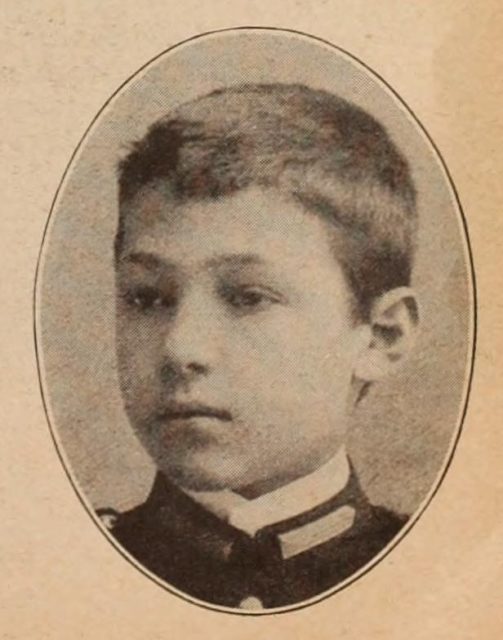 Rudolph Valentino as a boy

After playing lots of small “bit” parts, he finally had a break when he was cast in The Four Horsemen of the Apocalypse, which came out in 1921. The movie was a huge success, being one of the first to make over $1 million at the box office, and remains the sixth-highest grossing silent film of all time.

He would go on to star in many other films, including The Sainted Devil (1924), The Sheik (1921), and The Son of the Sheik (1926). Valentino was known to love animals, dogs and horses in particular. He was an avid horseman, doing many of his own stunts on horseback, causing much consternation to movie studios. 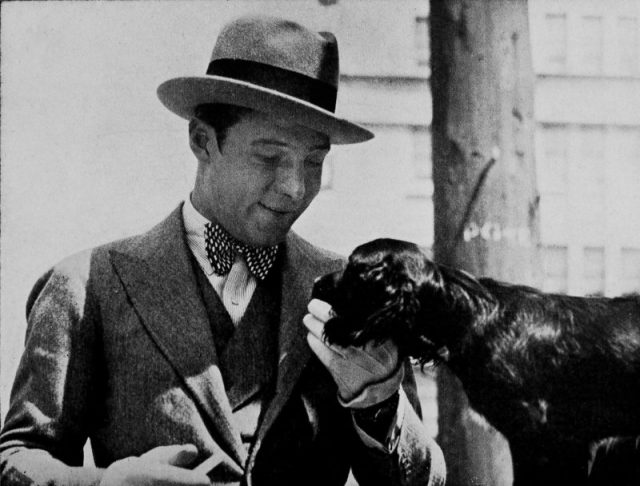 Rudolph Valentino with a Cocker Spaniel

In 1922, Valentino was given an Alsatian Doberman puppy by a Belgian diplomat (and fan) during his stay at a French estate owned by relatives of his then-wife, Natasha Rambova.

Valentino was immediately deeply smitten with his new dog, so much so that they slept in the same room wherever they were staying. When they traveled, Kabar was allowed to stay with Valentino in First Class (a perk of the wealthy) and the two were completely inseparable.

Despite this bond, Valentino did not take his beloved companion on what would be his final trip in July 1926, instead choosing to leave him behind at his mansion, Falcon Lair, in LA. While staying at the Hotel Ambassador in Manhattan on August 15th, Valentino collapsed. 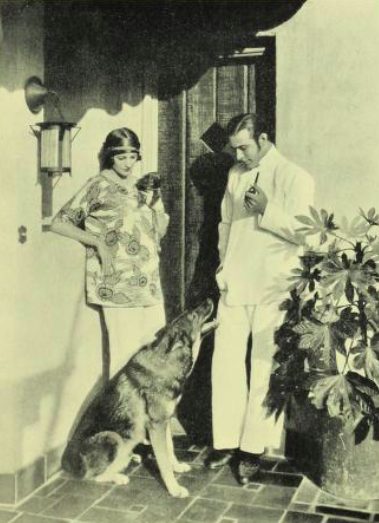 He was rushed to hospital where he was diagnosed with gastric ulcers mimicking appendicitis (now called Valentino’s syndrome), and surgery was immediately performed. However, his condition worsened a week later and he died on August 23rd, at the age of 31.

His funeral was held in Manhattan, where around 100,000 people attended, and he is buried next to his good friend June Mathis in the Hollywood Forever Cemetery in California. There has been a ceremony at the cemetery for Valentino every year since his death. 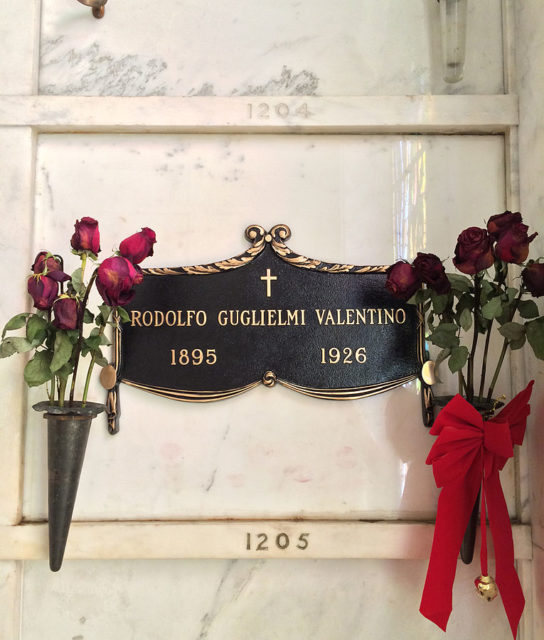 It is said that at the time of his death, some 2,700 miles away, Kabar began to howl, with the other dogs at Falcon Lair soon joining in. Although Valentino’s brother, Alberto, arrived and tried to calm Kabar, he remained restless and was continually sick, eventually running away. He returned to Falcon Lair a few months later but was in very poor condition.

His paws were raw, and he was desperately thin. News reports in the Lewiston Evening Journal at the time stated that he might have tried to travel as far as New York to find his master. 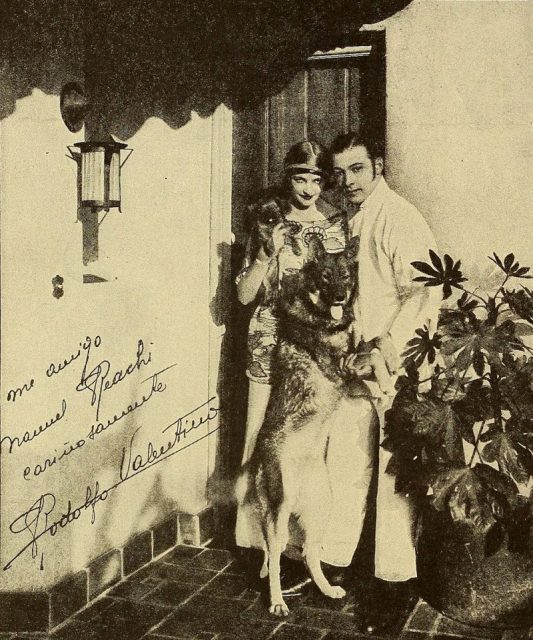 Valentino at home with Natacha Rambova and their dog

Unfortunately, he never fully recovered and died on January 17, 1929. His death was reported in the Chicago Daily Tribune in February that same year, and he is buried at the Los Angeles Pet Park in Calabasas. Just like the ghost of Valentino himself is said to haunt parts of Hollywood, the ghost of Kabar has also reportedly been seen, in particular at Falcon Lair around Valentino’s birthday. 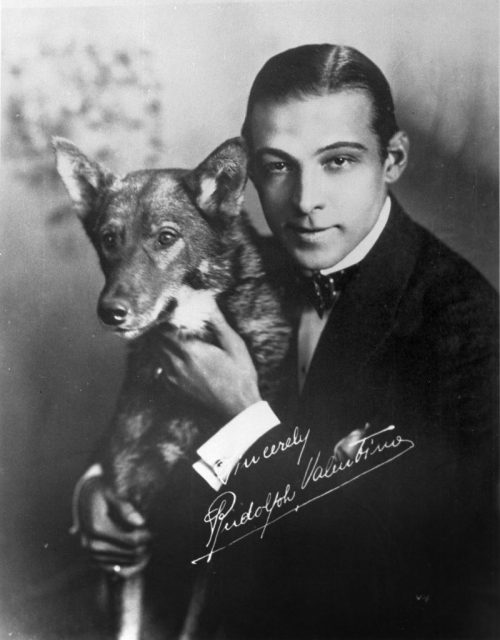 A black and white photograph of Rudolph Valentino with his dog

His spirit is also said to haunt the cemetery in which he is buried, and many people say they have heard a dog barking and panting near his grave. Some have even said they felt their hands being licked while visiting the site.

If these reports are to be believed, perhaps one could speculate that dog and owner are still trying to find one another. Or simply that the Valentino-Kabar story is another fantastic part of Hollywood lore. Either way, it would make a great movie.