Ever wonder if dinosaurs lived where you have? Before you start digging up your back yard, there’s another way to see how the land you live on has changed since early time. New technology lets you visualize this change all the way back to the Cryogenian Period, 750 million years ago — a time well before dinosaurs.

Many will recognize the name of the original supercontinent, Pangea, the land mass which broke up into all present-day continents. In school you may have learned about the separation of the continent in several stages, but what about in minute detail? What about the actual country, let alone state, let alone county in which you now live? Where did that piece of land factor? 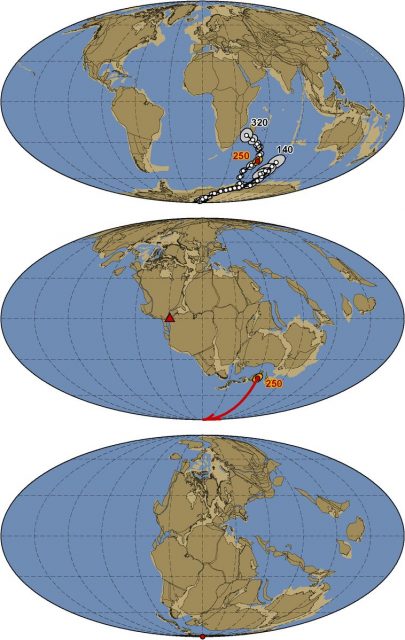 A free-access website shows you the development of planet Earth over the tens of hundreds of millennia it’s been changing. Following a simple, no-nonsense design, you can use the arrow keys on your keyboard to scroll from the Cryogenian Period (from 720-635 million years ago), to the Neogene Period (between 23 million and 2.6 million years ago), up to present day. A rotating globe depicts the development and outspreading of land masses, which are superimposed with the borders of Earth’s modern-day countries.

You can watch the Earth spin ’round as you slowly make your way through the Periods, or you can search by certain addresses: be it a general area, a national monument, or your own home address. All of this can be viewed over 26 different time frames, ending with today’s present globe. 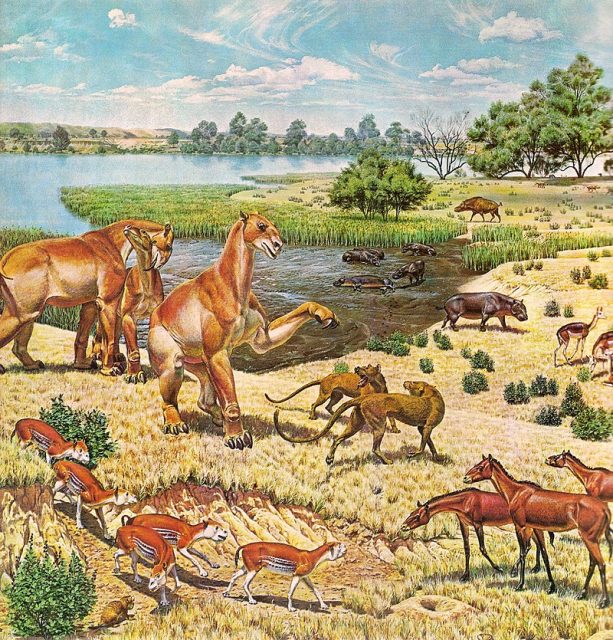 Another viewing option is given in a drop-down menu where you can choose to see the Earth during the time of the first vertebrates, the first land plants, the first primates, etc. You can zoom in and out of the globe for a better look and each Period is accompanied by a brief explanation of what existed on the planet at that time. It even provides links to the fossils found nearby your searched address so you can learn more about your property’s ancestors.

For example, 600 million years ago during the Ediacaran Period, Washington D.C. was on the edge of the singular continent, bordering the ocean and covered in ice. Jumping to the time of the first dinosaurs during the Middle Triassic (220 million years ago), the American capital was landlocked, neighbored with Western Sahara and Mauritania. 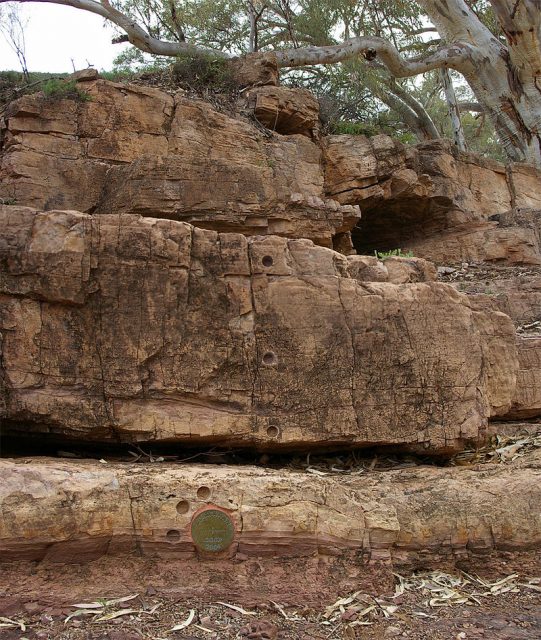 Photograph showing the ‘golden spike’ (bronze disk in the lower section of the image) of the Global Boundary Stratotype Section and Point (GSSP) for the Ediacaran period, located in the Flinders Ranges in South Australia. Photo by Peter Neaum CC BY-SA 3.0

It wouldn’t be until the famed Jurassic Period (170 million years ago) that D.C. was separated from the African continent by a budding ocean. Links take you to another page to learn about fossils recovered in the Washington D.C. area — creatures including the Astrodon, the Grallator, and the Mosasaurus.

Named Ancient Earth, this mapping tool is a part of dinosaurpictures.org, a database about — you guessed it — dinosaurs, created by Ian Webster. In order to realize his project, Webster tapped into the preexisting PALEOMAP Project by C.R. Scotese.

Latest project: enter an address and see where it was up to 750 million yrs ago. Screenshot of NYC on Pangaea during mid-Triassic (240Mya): https://t.co/YMNG0FWdXQ #webgl pic.twitter.com/7cyfXR3tP9

Using the cataloged information of changing plate tectonics along with the mapped-out development of Earth’s vast history of life forms, Webster condensed PALEOMAP’s sweeping database into a user-friendly visual aid. Under the username “typpo,” Webster wrote on a Hacker News thread, “I’m amazed that geologists collected enough data to actually plot my home 750M years ago, so I thought you all would enjoy it too.”

He admits that there was some artistic license taken, so as to enhance the visual aspect of the project, but criticism over the 3D rendering tends to come from more scientific points of view. “I’ve gotten emails from angry geologists because the globe does not advance one theory or another,” Webster writes.

Read another story from us: The First Highly-Detailed Maps of the Moon from the “Father of Lunar Topography”

His neutral standing and simple approach to the project reflects his hope for Ancient Earth to be used as tool to inspire, be it in the classroom or at home. Webster warns that although precise results come from plate tectonic models, “we will never be able to prove correctness.”

You can have fun seeing the approximate locations of various places with the interactive globe at dinosaurpictures.org.