It’s a little known fact that Parisians are keeping beehives on the rooftops of their best-known buildings. Not all, but bees are found for instance at the Musée d’Orsay, the Grand Palais, and Palais Garnier, as well as Notre Dame — which on April 15th, was sadly engulfed by a huge fire in which its spire and most of the roof collapsed within a few hours.

Early investigation results have shown that the fire may have spread due to a possible fire alarm system sensor issue. The fire may also be related to the building of elevators for construction work that was ongoing in the cathedral at the time. Investigators are also seeking to find out whether an electrical short-circuit led to the appalling event. 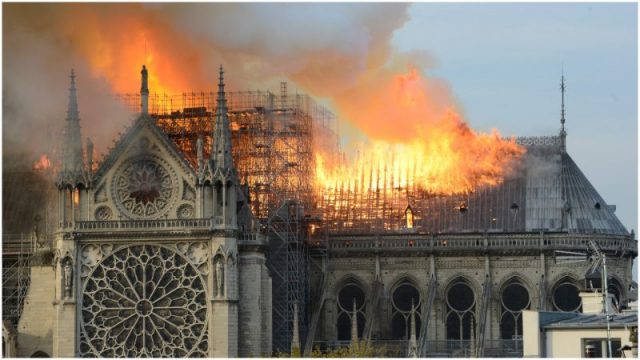 But back to the bees. For the past few years, Notre Dame has been the home of approximately 180,000 bees. Their three hives are secured on the first floor roof above the sacristy of the Gothic structure. It was initially thought that the colony must have perished in the fire but Notre Dame’s own beekeeper (apiculteur in French), Nicolas Géant, has confirmed that against all odds, the bees made it through the blaze.

The news that the Notre Dame bees are safe and sound was shared also by French urban beekeeping company Beeopic Apiculture, who posted a confirmatory Instagram photo on Thursday, April 18th. 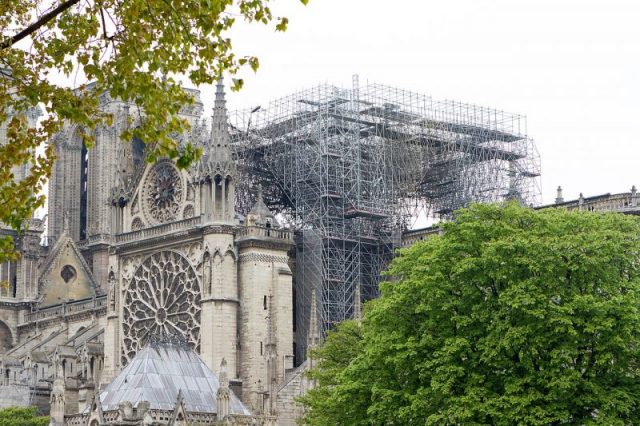 Notre-Dame after the fire. Photo by Pyb CC BY-SA 4.0

However, in the days in between, everyone remained worried about Notre Dame’s smallest, honey-making tenants. As French officers were examining the building if it has any weak points that may still threaten structural failure, not even Mr. Géant was allowed to take a look at the hives. Géant had in the meantime received hundreds of messages asking about the bees. Aerial photos of Notre Dame’s roof previously showed the hives themselves had survived the great calamity.

Géant has been taking care of the cathedral’s bees since 2013, the year this sort of clandestine activity first started there. Bee-keeping was introduced on Notre Dame as part of an effort to increase the number of bees across Paris. Honeymaking has since rooted in businesses within the French capital, with some of its honey being sold at double the prices of brands produced in the countryside. 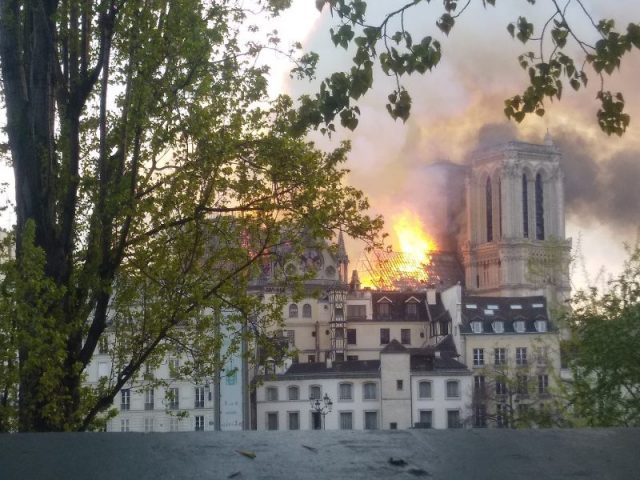 The Notre Dame beehives were located on the top of a sacristy on the south side of the cathedral, roughly 100 feet away from where the blaze was ravaging. That was enough distance for the hives to remain intact. But had they been closer to the fire, or in the middle of it, the wax within the hives would have easily melted, trapping the hard-working insects inside. Géant commented that the survival of the bees was like a miracle. “Thank goodness the flames didn’t touch them,” he said in a statement for CNN. Take a closer look with this video:

Typically for bees found in Europe, the ones on Notre Dame would have sought shelter inside the hives upon sensing the imminent threat nearby. The biggest threat for them would have been the extreme heat of the raging flames, but as Mr. Géant also explains, they were exposed to the smoke which has a specific effect on bees in general.

180,000 bees were living on top of Notre Dame when the fire broke out – and they survived https://t.co/pxjR5Zm9fm pic.twitter.com/wTGgW6cnzh

“Instead of killing them, the carbon dioxide makes them drowsy, puts them to sleep,” Mr. Géant told the AP. Smoke is frequently used by beekeepers to sedate bee colonies. This allows for the beekeeper to approach the hive and access the much-treasured honey produced there. “I was incredibly sad about Notre-Dame because it’s such a beautiful building,” Mr. Géant commented. 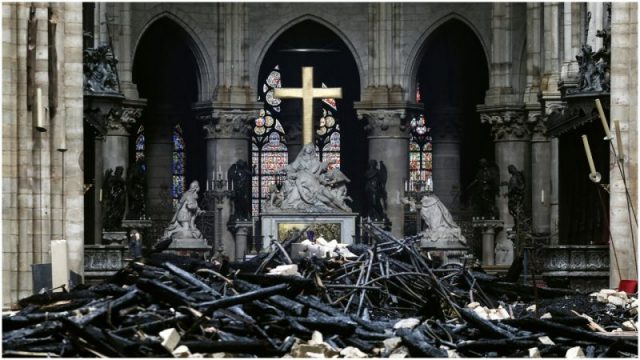 “But to hear there is life when it comes to the bees, that’s just wonderful,” he said.

Read another story from us: How the Hunchback of Notre Dame Once Saved the Crumbling Cathedral

Beekeeping on Parisian rooftops has increased in popularity within the past decade. Just ten years ago, the city reportedly had approximately 300 hives, and today there is an estimated 700. More often than not, the general public is unaware of where these hives are being quietly kept. In his media statements, Mr. Géant was also noted as saying that it had always been one of his dreams to take care of bees atop “the most beautiful church in the world.”