On April 22, 2019, the wreck of the SS Iron Crown, an Australian freight ship, was finally located after 77 years. The ship had been sunk by a Japanese submarine during World War II.

The Iron Crown was hit by a torpedo on June 4, 1942, while sailing through Bass Strait, off the coast of the Australian state of Victoria. The cargo ship, which was carrying manganese ore, sank within only 60 seconds, killing 38 of its 43 crew members.

Following the bombing of Pearl Harbor on December 7, 1941, the Imperial Japanese Navy targeted other Allied objectives, including Australian ports that would harbor allied warships. In May and June of 1942, the Japanese operated in Sydney harbor using midget submarines, as reported by Robert Nichols for Wartime. 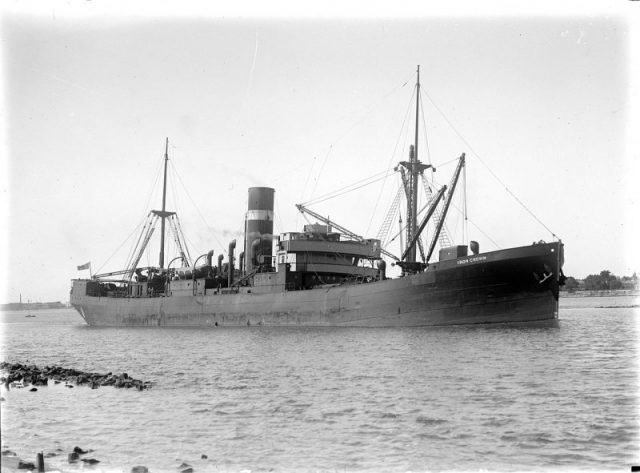 The SS Iron Crown, a bulk ore carrier which was torpedoed by a Japanese submarine on June 4, 1942 off the coast of Victoria, Australia

According to Nichols, the Japanese specifically targeted two cruisers: the American USS Chicago and Australian HMAS Canberra. After failing to sink them during their missions in the New South Wales ports of Sydney and Newcastle, and losing two submarines in the process, the Japanese expanded their theatre of operations to the whole Australian East coast.

It is during one of these mission that the Iron Crown was sunk. David Stevens wrote “A Critical Vulnerability” for the Australian Sea Power Center, in which he analyzes the Japanese submarine attacks during World War II. Stevens explains that while the Japanese sank five ships and damaged a few others, they missed their most important military objectives. However, these operations were successful in disturbing Australian supply routes.

The SS Iron Crown was hit by a torpedo on June 4, 1942 while carting ore in waters off Australia’s southern coastline. pic.twitter.com/RZHPBVqtUP

The wreck of the Iron Crown was located by the scientists aboard research ship Investigator thanks to multi-beam sonar equipment and a special drop camera, according to Maritime Executive. It lies more than 700 meters deep underwater, about 100 kilometers away (about 62 miles) from the Australian coast. The ship was found almost intact, but is too deep in the ocean to be reached by divers, according to The Guardian. It has already been subject to exploration however, as scientists have used deep water cameras to capture footage of the wreck.

“The fact that so many lives were lost … hit home with all scientists, staff and ship crew working on [the project],” said Emily Jateff, chief scientist from the Australian National Maritime museum. Peter Harvey is a maritime archaeologist for the Heritage Victoria foundation. Harvey said this event was significant for Victorians and how they remember this episode of World War II, and how it touched their state.

It took only 60 seconds for Australia’s SS Iron Crown to sink after being torpedoed on June 4, 1942. Thirty-eight of its 43 crew were killed. Seventy-seven years later, their final resting place has been found at the bottom of Bass Strait https://t.co/SOnkRjnuxU

“Locating the wreck after 77 years of not knowing its final resting place will bring closure for relatives and family of those that were lost at sea,” Harvey said.

Harvey pointed out that the Iron Crown is the only World War II wreck lie in Victorian waters. The Iron Crown’s oldest survivor, George Fisher, died in 2012. He was only 18-years-old when the Iron Crown was sunk, where he was serving as a deck boy. According to the Australian Broadcasting Company, Fisher said that he did not feel haunted by the sinking of the Iron Crown, but still felt that great sorrow about it.

“That’s a very sad part of my life,” Fisher said. “One of the saddest.”

Fisher was dedicated to the remembrance of his companions who died in the sinking of the ship. Lorraine Silvester, his partner at the time of his death, said Fisher had been working towards establishing a plaque in remembrance of his shipmates at the War Memorial in the city of Mallacoota, Australia.

Read another story from us: 3,600-yr-old Shipwreck Uncovered Could be Oldest Ever Found in the Mediterranean

Silvester said that the story of the Iron Crown remained always important for Fisher, even after many years had passed.

“George was so passionate about having his shipmates remembered,” she said.

With the finding of the Iron Crown’s wreck on Monday, Fisher’s work of establishing a memorial has been advanced further, as Australians can now pinpoint where his shipmates lie.