Caligula – The Mad Emperor of Rome

One of the Roman Empire’s most notorious characters was its third emperor, Caligula. He was tyrannical, possibly insane, and had tendencies towards debauchery and even the merciless taking of life. There are only a few surviving primary sources from Caligula’s time regarding his reign, and those that we do have describe his cruelty, extravagance, sadism, and perversions.

While these sources are not infallible, we do know that Caligula tried to increase as much personal power of the emperor as he could during his short time in power. 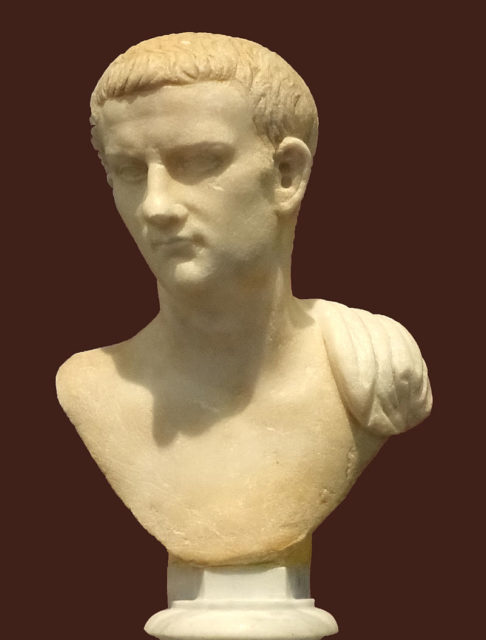 Portrait of Caligula from Palazzo Massimo in Rome. Photo by Tomk2ski CC BY-SA 4.0

Born in Antium as Gaius Julius Ceasar Augustus Germanicus in 12 AD, Caligula earned his nickname, which means “little soldier’s boot”, as a child by going on campaigns with his father, Germanicus, a Roman general. One of six children (the others being Nero, Drusus, Agrippina the Younger, Julia Drusilla and Julia Livilla), Caligula was born into the first ruling family of the Roman Empire – his mother, Agrippina was the granddaughter of Augustus, the first emperor.

When their father died in 19 AD, the family returned to Rome, and Agrippina became embroiled in a terrible feud with the new emperor, Tiberius, who she believed to have been responsible for her husband’s untimely end. 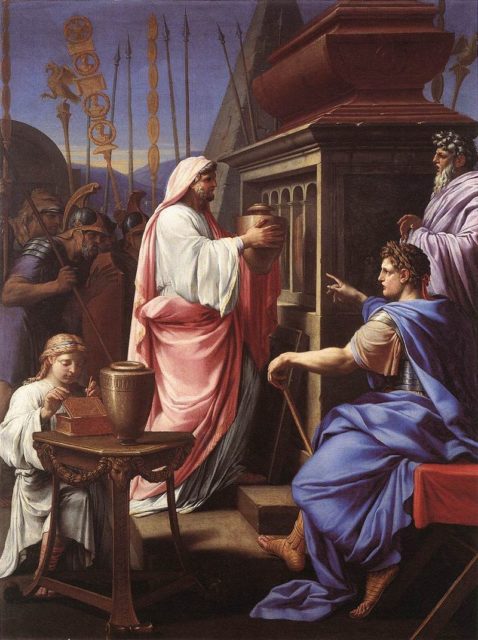 ‘Caligula Depositing the Ashes of his Mother and Brother in the Tomb of his Ancestors’, by Eustache Le Sueur, 1647

As a result, Agrippina and two of her children, Nero and Drusus, were considered political rivals and were banished or imprisoned for life. Caligula, as the only male survivor, was first sent to live with his great-grandmother, Livia, who was also Tiberius’ mother, and then later with his grandmother, Antonia Minor, who managed to protect him from political intrigue.

“During the reign of Caligula, coins like the one pictured here were issued depicting his three sisters, Drusilla, Livilla, and Agrippina the Younger”. Photo by Classical Numismatic Group, Inc. http://www.cngcoins.com CC BY-SA 2.5

Roman historian Suetonius wrote that after the banishment of his mother, Caligula and his sisters were no more than prisoners of Tiberius under the close supervision of soldiers. In 31 AD, he was summoned to Capri by a now aging Tiberius, who adopted him and made him and his cousin Tiberius Gemellus equal heirs to the throne. 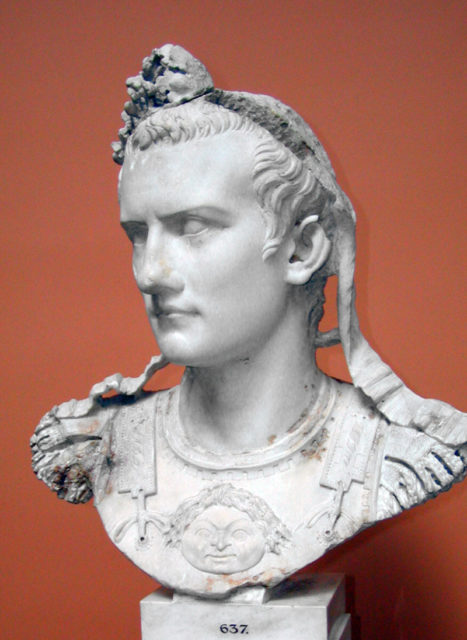 Tiberius was not exactly the model of good leadership and was known to be a predator and deviant, according to Suetonius and another Roman historian, Tacitus.

He indulged Caligula’s behavior, commenting that he was “nursing a viper in Rome’s bosom.” Suetonius noted that Caligula was a good actor, and knew that he needed to hide all resentment towards Tiberius in order to survive. An observer at the time noted, “Never was there a better servant or a worse master.” 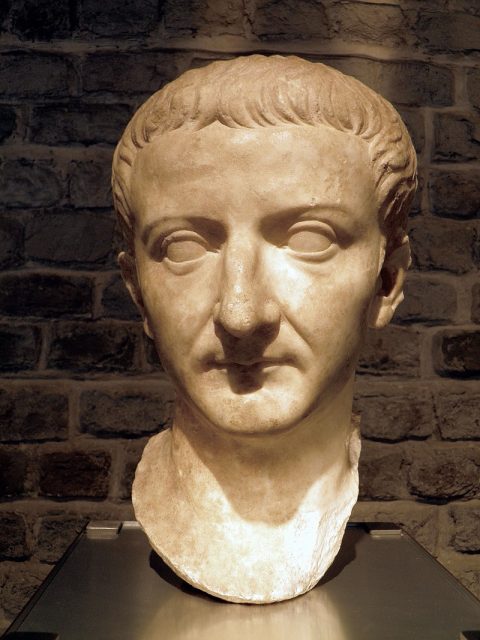 When Tiberius died in 37 AD, Caligula’s friend and Praetorian ally, Naevius Surtorius Marco, made arrangements for Caligula to be declared the sole emperor of Rome.

According to Tacitus, Marco may have also had a hand in Tiberius’ ebd, writing that Marco smothered the emperor with a pillow to accelerate Caligula’s ascension. Suetonius, on the other hand, accused Caligula of the deed, while both Seneca the Elder and Philo, who were alive during the time of Tiberius, noted that the emperor died of natural causes. 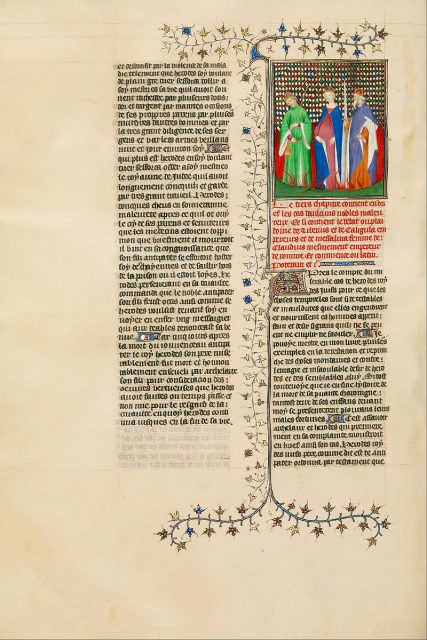 Tiberius, Messalina, and Caligula Reproach One Another in the Midst of Flames

For the first few months of his time on the Roman throne, Caligula was generous, creating bonuses for the military, as well as the Praetorian Guard. He declared Tiberius’ treason trials to be in the past and welcomed back those who had been sent into exile (and were still alive). He ordered the remains of both his mother and brothers to be returned to Rome and placed in the tomb of Augustus.

He is described as being the first emperor who was generally admired by everyone, “all the world, from the rising to the setting sun,” particularly as his father had also been very popular. But the blissful period, as noted by Philo, was not to last. 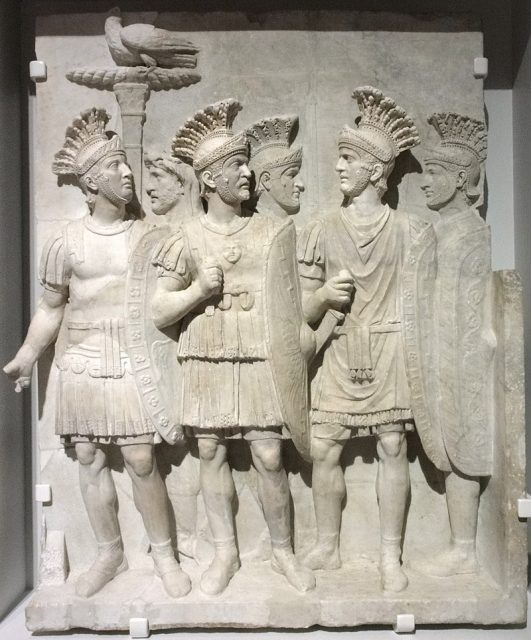 “The Praetorians Relief with an aquila (eagle) grasping a thunderbolt through its claws, in reference to the Roman interpretatio graeca form of Jupiter”

A few months after becoming emperor, Caligula became very ill, and rumors swirled that he had been poisoned. Many believed that this turned him mad (it is possible he suffered from epilepsy, or could even have had meningitis or hyperthyroidism). As a result, he started to distrust and even do away with anyone and everyone that he believed to be a threat or who had wronged him in some way.

He had his cousin, Gemellus, done away with, which led to the demise of his distraught grandmother, Antonia Minor. While some contemporary sources said she took her own life, Suetonius hinted that it was Caligula who was directly responsible for her end by poisoning. He got rid of both his father- and brother-in-law, and exiled two of his sisters (the third, his favorite, died in 38 AD). 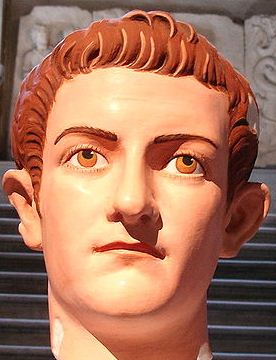 “A marble bust of Caligula restored to its original colours. The colours were identified from particles trapped in the marble.” Photo by G.dallorto

He even went so far as to state that his mother, whose remains were once lovingly interred with those of Augustus, was the incestuous result of a relationship between Augustus and his own daughter, Julia the Elder. Even his friend Marco died within the first year of Caligula’s reign – although whether he took his own life or something worse remains open to question. 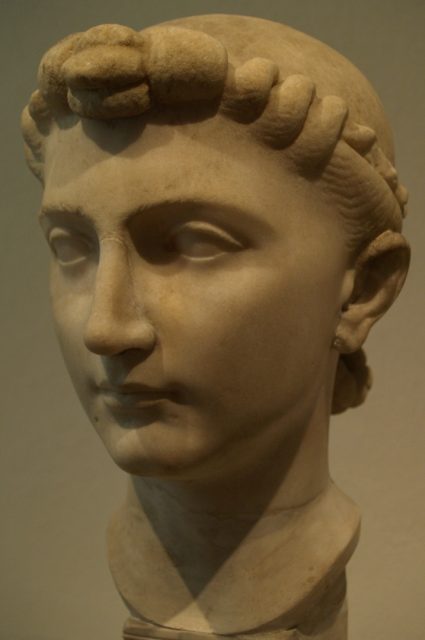 The empire was in financial crisis by 39 AD, its leader having spent most of the state’s treasury. To help fund his rule, Caligula levied taxes on weddings, lawsuits and prostitution.

He auctioned the lives of gladiators in the arena. Centurions and some government officials, such as highway commissioners, were forced to turn over to the state property or money that they had acquired. According to Suetonius, in the first year of Caligula’s reign, he managed to waste 2.7 billion sesterces – a colossal sum. 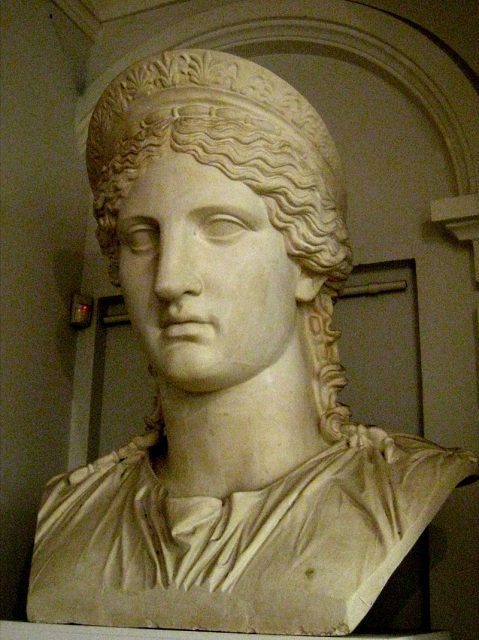 Caligula also began referring to himself using divine language. He started dressing as various gods and demigods, and referred to himself as a god when he met with politicians. He was even called “Jupiter” in some public documents.

Several conspiracies pertaining to the possible demise of Caligula whirled throughout Rome during this period, but it all came to a final conclusion in 41 AD when officers in the Praetorian Guard brutally did away with Caligula. According to Suetonius, on January 24th, Caligula was accosted while he was talking to a group of actors in the imperial palace.

The leader of the Guard, Cassius Chaerea, is believed to have been the first to stab Caligula, and he was stabbed a total of 30 times by the group. He was gone before the Germanic guard could respond.

His uncle, Claudius, who had the support of the Praetorian Guard, succeeded Caligula. Chaerea was executed, as well as other known conspirators, and Caligula’s body was cremated and then entombed in the Mausoleum of Augustus, with his family. His ashes were scattered during the sack of Rome in 410.