The Monumental Colossi of Memnon that “Wail” at Sunrise

The Colossi of Memnon are some of the most imposing structures on Earth. For centuries, the deserts of Egypt have concealed the engineering wonders of the country’s ancient past and the achievements of its greatest pharaohs. One of them was Pharaoh Amenhotep III, the ninth king of the 18th dynasty (c. 1386 – 1353 B.C.), under whom the ancient Egyptian kingdom thrived and prospered.

Amenhotep III’s reign was marked by peace and territorial expansions. His was also an era of proliferation of the arts, with a number of the most remarkable landmark sites of ancient Egypt being constructed during his rule.

The Colossi of Memnon, nestled in the Theban necropolis, close to Luxor and the Nile River, was completed in around 1350 BC and was built in honor of this pharaoh. 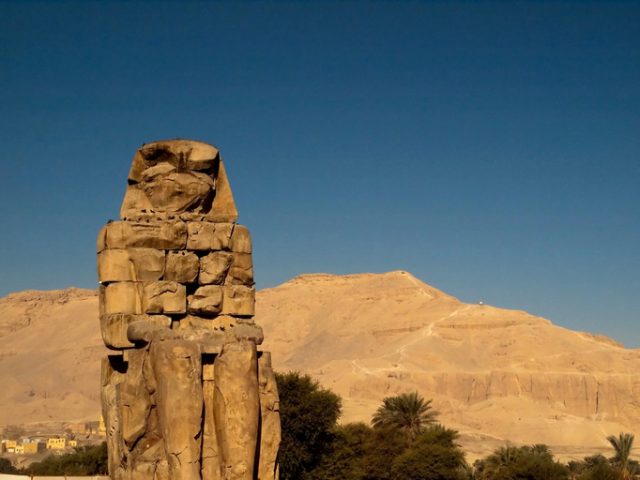 One of the two Collosi of Memnon, Luxor, Egypt

The Colossi of Memnon is a pair of huge quartzite sandstone monuments, both depicting the figure of Pharaoh Amenhotep III. Some people use the names el-Salamat or el-Colossat for the structures, while others use the references of Northern and Southern structures respectively. 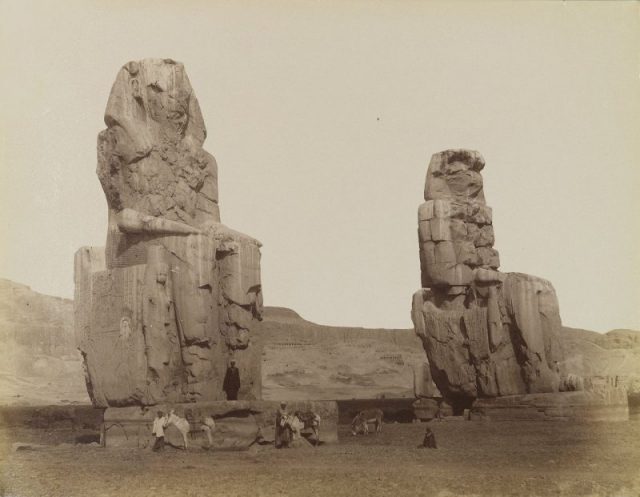 Gazing towards the east, the colossal figures are carved in a seated position, with the pharaoh’s hands resting on his knees. Once in the distant past, the structures would have graced the entrance of a temple in his name, which is said to have been the most bountiful and beautiful across Egypt at its peak. 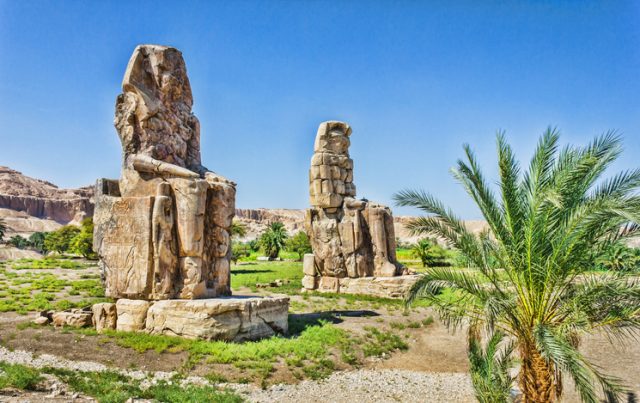 Colossi of Memnon, Valley of Kings, Luxor, Egypt in 2012

Sadly, Amenhotep III’s temple is no more than rubble and ruins, the output of time and long sequences of natural calamities such as floods and earthquakes. While the temple was lost, the two monuments have survived almost intact.

One of those natural disasters purportedly helped the two monuments enter into legend. In the 1st century, the Greek philosopher, geographer, and historian Strabo wrote that when an earthquake struck the region in 27 BC, the upper part of the Northern colossus broke and fell. 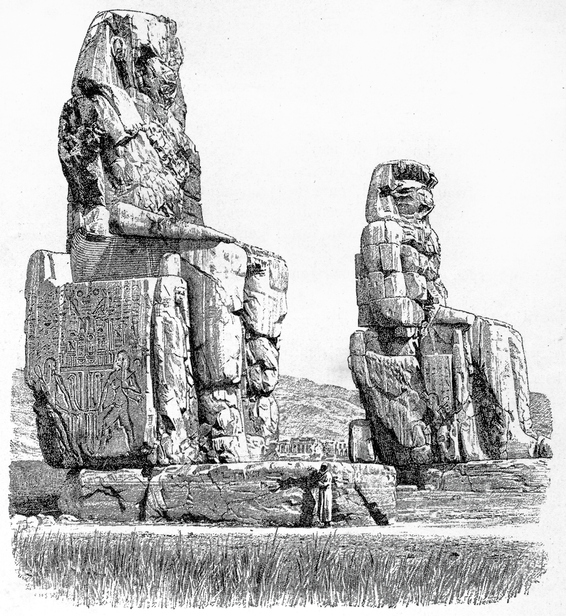 Colossi of Memnon, Egypt, depicted in the 1895 book ‘The Earth and Her People’

The natural catastrophe left cracks and fissures in the rock that made the monument “sing,” “whistle” or “wail” early in the mornings at sunrise.

Scientifically explained, the sounds were probably produced by evaporating dew contained in the fissured stone, however the legend told that good fortune would follow those hearing the sounds. Quickly, the site began to lure many visitors, including the great Roman Emperor. 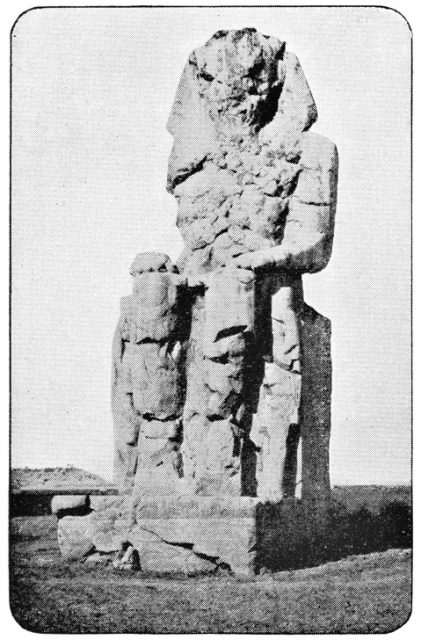 The mysterious sound also helped the name Memnon stick for the figures, a name adopted from ancient Greek mythology — according to which, Memnon was born to Eos, goddess of the Dawn, and he loses his life during the Trojan War. He was among those done away with by Achilles as revenge for his befallen dear friend Patroclus. The strange sound from the cracks of the Colossus was said to be Memnon calling for his mother every morning.

Beyond legends, the two figures of the pharaoh come with intriguing decor details. The Northern one has a figure of Mutemwiya, the Pharaoh’s mother, carved in the side. Her name translates to “Mut in the divine bark.” This is likely the reason why some have interpreted the monument’s sound as being the voice of Amenhotep III calling for his mother instead. 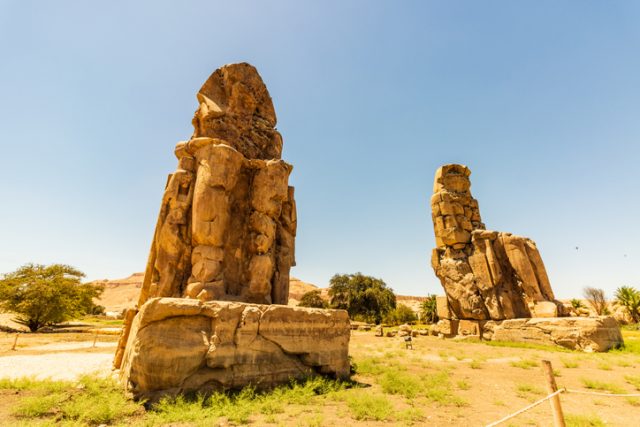 Luxor, Egypt. The Colossi of Memnon

When the Romans attempted to repair the structure fissures during the 3rd century AD, the sound vanished. The refurbishment was under the orders of Emperor Septimius Severus, however, his initiative also distorted the original image of the monuments.

Previously the Northern and the Southern structures were identical depictions of the great pharaoh. Following the Roman retouch, the two figures differentiated. 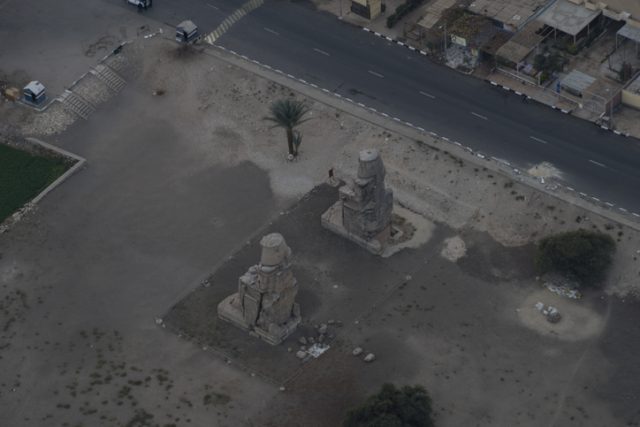 The view from a hot air balloon of the Colossi of Memnon in Luxor, Egypt, in Northern Africa

Other portrayals that can be seen on the colossi include one of pharaoh’s wives, one of his daughters, and the Nile deity Hapy. The wife depicted is Tiy, one of the most distinguished queens of ancient Egypt who, as the preferred spouse of Amenhotep III, held the title Great Royal Wife.

Hapy was the god of water and fertility, associated with the Nile River and its floodings. This deity also manifested the unity between Upper and Lower Egypt. 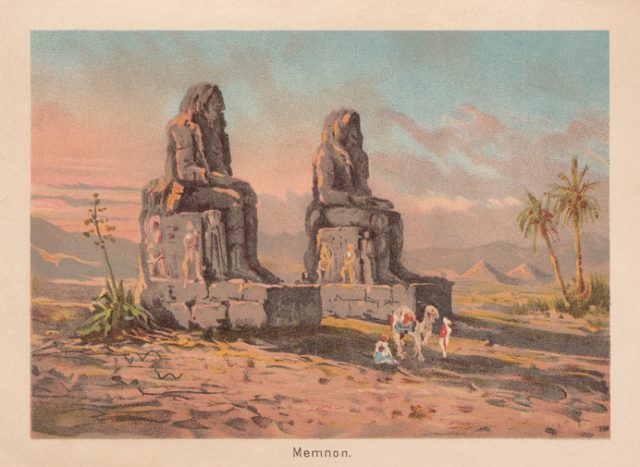 The Colossi of Memnon, near Theben in Egypt. Lithograph, published in 1887

The principal function of the monuments, which reach a height of 75 feet, was to guard the temple of Amenhotep III behind them. In his day people believed he was a real god walking the earth.

The Colossi of Memnon remains one of Egypt’s most important sites of interest as a historic reminder of the greatness and prestige Egypt earned internationally under Amenhotep III. People come to see Tammy and Shammy, as the figures have been nicknamed by contemporaries, derived from the Arabic words for left and right.

Other artifacts accessible at the site include an unusual pair of headless sphinxes, and one which has a tail of a crocodile.