An Irish Viking. The concept has become more real and more captivating. Anyone who’s read even a bit about the history of the Vikings knows that their DNA is likely to be found in people living in the British Isles today. New research shows that the Irish definitely have their fair share of Viking heritage–in fact, the Irish are more genetically diverse than most people may assume.

The Irish have Viking and Norman ancestry in similar proportions to the English. A comprehensive DNA map of the Irish has for the first time revealed lasting contributions from British, Scandinavian, and French invasions.

“By comparing 1,000 Irish genomes with over 6,000 genomes from Britain and mainland Europe, genetic clusters within the west of Ireland, in particular, were discovered for the first time, leading the researchers to investigate if invasions from the Vikings and Normans to the east may have influenced genetics in that part of the country,” according to Irish Central.

Because of extensive Irish immigration to the United States and other countries, these findings have ramifications. There are 80 million people in the world who claim Irish heritage.  “This subtle genetic structure within such a small country has implications for medical genetic association studies,” said Trinity College Dublin geneticist Dr. Ross Byrne. In fact a number of American slang words have roots coming from the Irish:

Researchers found 23 distinct genetic clusters, separated by geography by comparing mutations from almost 1,000 Irish genomes with over 6,000 from Britain and mainland Europe. “These are most distinct in western Ireland, but less pronounced in the east, where historical migrations have erased the genetic variations,” said the Irish Mirror.

The researchers studied genes from Europe and calculated the timing of the historical migrations of the Norse-Vikings and the Anglo-Normans to Ireland, yielding dates consistent with historical records.

The Vikings invaded Ireland for the first time in the 8th century, raiding a monastery on Rathlin Island on the northeast coast. The Viking warriors were large in numbers and well armed. They moved inland along river-ways, attacking the monastic settlements they came across. They also took captives to trade as slaves. 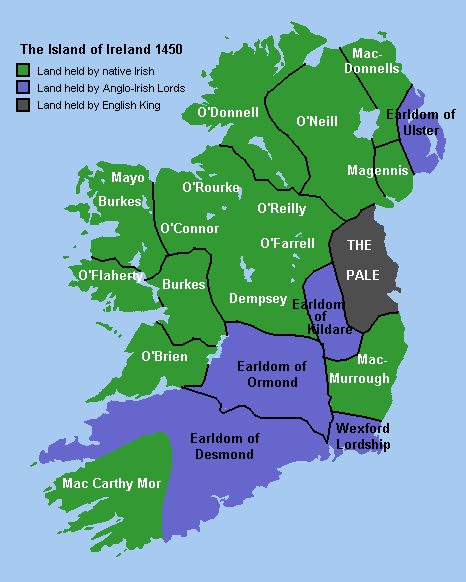 The Vikings in Ireland built wintering camps, known as longphorts (derived from the Irish words boat & fort), a ship port. This meant they could settle on the island longer. They used their longphorts as a base allowing them to perform further in-land raids.

Although longphorts were mainly built to only last one winter, some of them became major settlements, such as the one in Dublin, Dyflinn, founded in 841 AD.  Excavations during the 1970’s discovered more than 100 homes from this early period and thousands of daily household objects in Dublin.

The Viking conquest in Ireland would continue for more than 200 years, until the arrival of the Anglo-Normans. In the late 12th century, the Norman lords who had already subjugated England came to Ireland to take large plots of land. In the 16th century, under Elizabeth I, many more English Protestant families arrived, often displacing the native Catholics.

It’s believed that the first group of Vikings to invade Ireland were from Scandinavia. They had also settled in Scotland and would later became known as Gallowglass, an elite mercenary warrior group. From the mid-13th to the early 17th centuries they fought for hire in Ireland itself. Their name is an Anglicization of the Gaelic word gallóglach (roughly pronounced GAHL-o-glukh), which translates as “foreign warrior.”

Gallowglass are descendants of not only Vikings but of Scots native to the western Highlands and Hebrides. As Scottish historian Fergus Cannan notes, the Gallowglass “lived for war.…His sole function was to fight, and his only contribution to society was destruction.”