A gold Roman coin has just set a new record at auction. Many a metal detectorist is fueled by fantasy, but one 30-year-old man succeeded beyond many people’s dreams when a coin he found in March 2019 in a field in Kent, England, turned out to date to the 3rd Century Roman Empire and was recently sold for $700,000 in auction.

The 1,700-year-old coin, an ancient Roman aureus, shows the face of Allectus, a finance minister in Roman Britain who usurped the crown when he took out Emperor Carausius. The gold coin from his reign is considered rare, and a bidding war defied the auctioneer’s estimate for the piece and set new records. It is the most money ever paid for a coin depicting Allectus and is reportedly the most valuable Roman coin minted in Britain to have been sold at auction.

“After fierce competition in the room, on the internet and on the telephone, it was bought by private collector bidding on the telephone,” said the auctioneer DNW.  “The detectorist, who has followed the pursuit for seven years, wishes to remain anonymous but commented after the sale: ‘I cannot believe it, we are ecstatic! We expected it to sell for a little over estimate, but not five times the estimate! We are sharing the money with the farmer, who is also thrilled!’ ”

The detectorist had secured the owner’s permission to investigate the land, which is near an old Roman road. The coin was authenticated by the British Museum and described as an exceptional find.

Emperor Allectus has been humorously touted as “the first Brexiteer” because he took Britain out of the Roman Empire during his reign from 293 AD to 296 AD. He is best known for his attempts to lead a rebel empire, effectively annexing Britain from Rome. However, Allectus was killed in battle after Constantinus’s army arrived in Britain to deal with him. Constantinus was the father of Constantine the Great, the first Roman emperor to convert to Christianity. 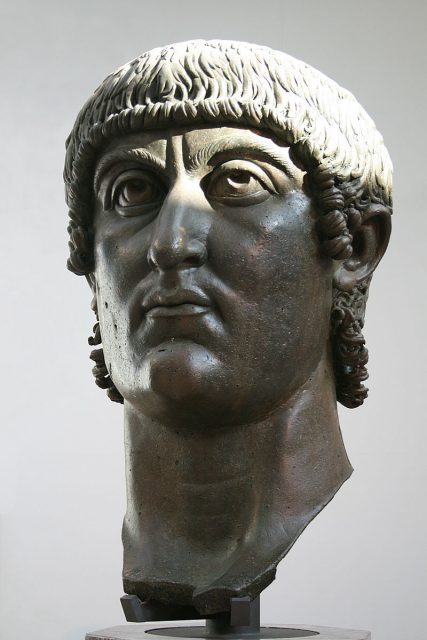 Head of emperor Constantine I. Photo by Jean-Pol Grandmont CC by SA 3.0

Roman rule continued in Britain until the early 5th century AD, when because of economic decline and the collapse of the empire the Roman officials withdrew.

As Christopher Webb, Director and Head of DNW’s Coin Department, said: “I am delighted with the phenomenal price achieved in today’s sale. This is the most expensive coin that we have ever sold at Dix Noonan Webb – as well as being one of the world’s most expensive Roman coins, it is the most money ever paid for a coin of Allectus and it is now the most valuable Roman coin minted in Britain to have been sold at auction. It was a unique opportunity to acquire a stunning coin and the only other one known struck from the same pair of dies is in the British Museum.” 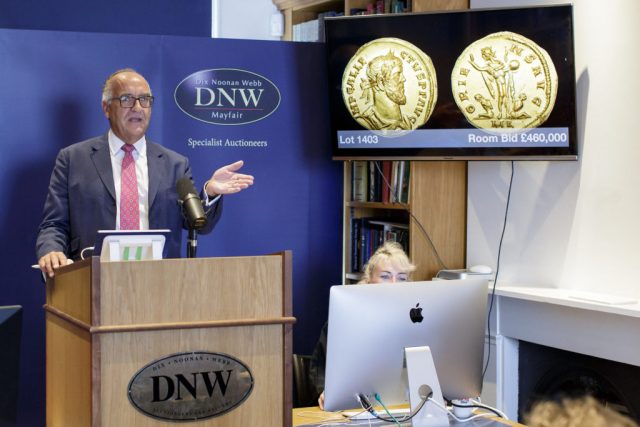 He continued: “There are only 24 aurei of Allectus known worldwide. Gold coins were initially produced to pay an accession donation in AD 293 but continued to be issued throughout his reign and were probably demonetized after his death in AD 296, as no coins of Carausius or Allectus are found in later hoards.”

The Antiques Gazette quoted the anonymous detectorist as saying that “at first we found bits of old tractors and shotgun cartridges, but after 45 minutes I found the coin.” Initially, he and his brother believed they had a gold sovereign, a coin from modern times. The man brought his discovery to the attention of the authorities as required by law.