Nike Shoe Controversy Brings Betsy Ross into the Spotlight – Who was she Really?

Nike created a shoe with a version of the “Betsy Ross Flag”–a U.S. flag with 13 white stars that was was created during the American Revolution–but then said on July 2nd that it was canceling the release of the flag-themed shoe the week of July 4th because it could “offend and detract” on the holiday.

The Wall Street Journal reported that Nike pulled the shoes after NFL-quarterback-turned-activist Colin Kaepernick, who is a Nike endorser, said he found the flag design offensive due to its association with a time of slavery in America. Nike’s decision has caused controversy, with Arizona Governor Doug Ducey calling for the withdrawal of financial incentives for Nike to open a plant in the state.

“It shouldn’t take a controversy over a shoe for our kids to know who Betsy Ross is,” Governor Ducey posted on Twitter. “A founding mother. Her story should be taught in all American schools.” 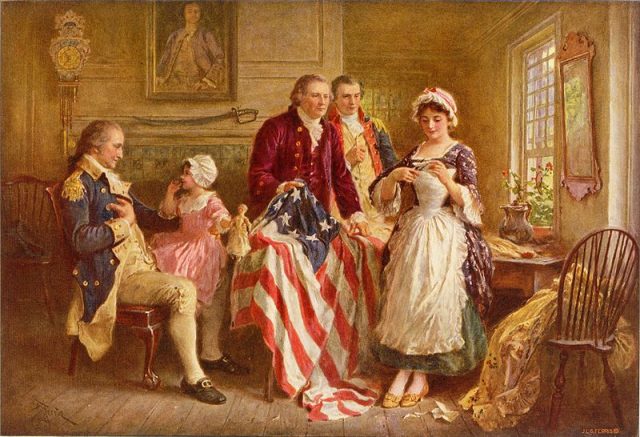 Betsy Ross showing Major Ross and Robert Morris how she cut the stars for the American flag. George Washington sits in a chair on the left.

The Betsy Ross story has some patchy areas but she is far from a myth. The most well known version of the Betsy Ross legend is that while the colonies were fighting Great Britain for their freedom in 1776, George Washington and other leaders visited Betsy Ross’s upholstery shop in Philadelphia, unannounced, and talked about the need for a flag for the American side. Ross then whipped up a red, white, and blue flag with 13 stripes and 13 stars. 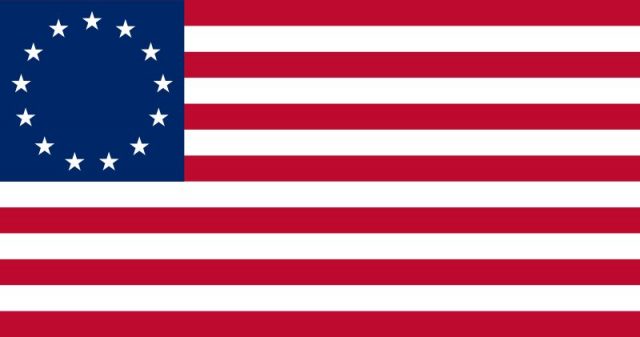 The first design of the American flag

Betsy Ross, whose full name is Elizabeth Griscom Ross, did exist. She was a fourth-generation American, born on January 1, 1752, one of 17 children, and grew up as a Quaker. The Quakers opposed slavery since the 17th century. The beginnings of their opposition is pinpointed to 1657, when their founder, George Fox, wrote to his slave-holding peers to remind them of the Quaker belief in equality. 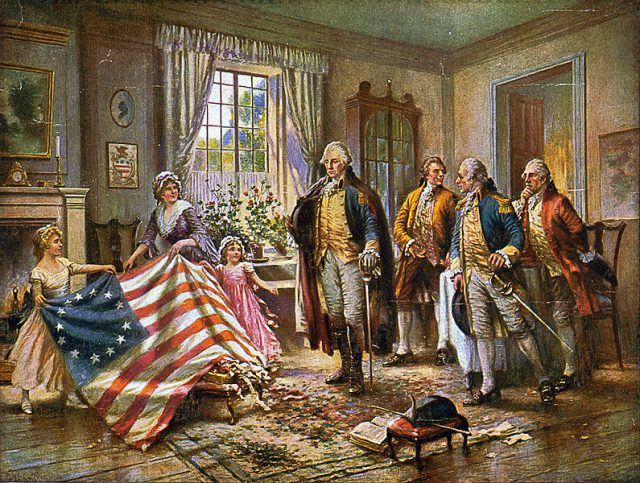 “The Birth of Old Glory” by Percy Moran, 1917. Betsy Ross and two children presenting the flag to George Washington and three other men.

While she was working as an apprentice at an upholsterer, Betsy fell in love with a fellow upholsterer, John Ross, and married him. Since John was an Anglican and not a Quaker, she left her church at that time. Eventually, the couple opened their own upholstery business.

It’s contained in the historical record that Betsy Ross made flags for the Pennsylvania navy during the war. She also lost her husband when he was killed by a gunpowder explosion while on militia duty at the Philadelphia waterfront. Following his death, Betsy acquired his property and kept the upholstery business going, working day and night to make flags. 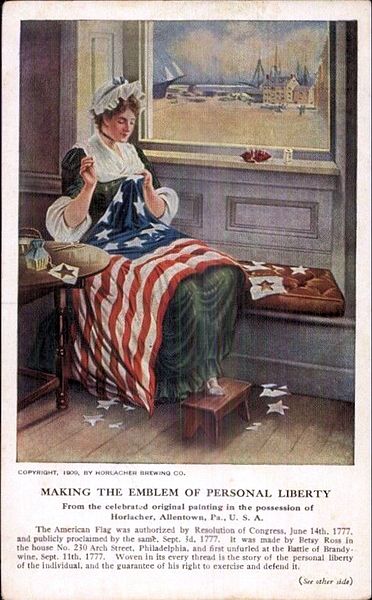 Betsy Ross married twice more. After her third husband died in 1817 after 20 years of poor health, she kept the upholstery business going for another 10 years. She had seven children, not all of whom survived infancy. Betsy Ross died on January 30, 1836, at the age of 84. She is not known to have ever owned slaves.

There is no historical evidence or documentation that proves Betsy Ross was the one to create the flag attributed to her. She never claimed any contribution to the flag design in her lifetime. A century after the American Revolution, Ross’s grandson, William J. Canby, presented a paper to a state historical society in which he said that his grandmother “made with her hands the first flag” of the United States. The story grew from there.

In “Betsy Ross and the Making of America,” Marla R. Miller wrote that “there’s no doubt that Ross was working as a Philadelphia flag maker by 1777, and over her sixty-year career she made hundreds of flags.” Supporters of the Betsy Ross flag story said that her first husband had connections to leading patriots, that Washington was in Philadelphia in the spring of 1776, and she was paid a sizable sum of money for making flags. But others have said insisted that Betsy did not have anything to do with the first flag of the U.S., and this was a story invented by her descendants.

Related Article: The 50-Star American Flag was Designed by a High School Student

“Although the Betsy Ross House, where she is reputed to have made the flag, is one of the most visited tourist sites in Philadelphia, the claim that she once lived there is also matter of dispute,” said Biography. “Despite the unlikelihood of the story for which she is known, Betsy Ross is, however, a fine example of what many women of her time audaciously endured: widowhood, single motherhood, managing household and property independently and quickly remarrying for economic reasons, and her story and her life are nonetheless stitched into the fabric of American history.”