The 13-panel painting depicts what is viewed as violence against Native Americans and slaves and reportedly that was the artist’s intention. Nearly 90 years ago, Russian-born artist Victor Arnautoff painted the mural, titled “The Life of George Washington,”  as one of more than a dozen such public works that were part of President Franklin Roosevelt’s Works Progress Administration initiative. The first president’s rise to power is shown in Arnautoff’s frescoes, including one that depicts slaves working on Washington’s property and men stepping past the body of a deceased Native American.

Although it is said Arnautoff was, through his art, criticizing Washington rather than glorifying him, opponents of the mural say it is too upsetting for some people to look at slaves and Native Americans being mistreated. “I understand the position where people believe you should leave the murals and the monuments up so we don’t forget,” said James Taylor, University of San Francisco politics professor, in an interview. “The problem is on a daily basis, unless that’s contextualized, it causes injury to young people and to their families and to the staff.”

Some who wanted to keep the murals as they were praise their artistic value. Born and raised in Russia, Arnautoff moved to the Bay Area to study art. He was a Communist, mentored by the prominent Mexican artist Diego Rivera. “At the time, his school mural was considered something of a subversive work, illustrating Washington’s connections to slavery and slaughter,” said the San Francisco Chronicle. 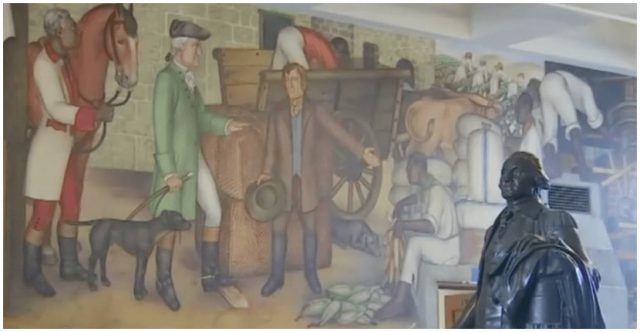 Another controversial image of the George Washington mural. Photo via KTVU CC by 2.0

“This mural was meant to correct the whitewashed — in both senses of the word — textbooks of the time that remained whitewashed until recent times,” said Leslie Correll, a 1961 Washington High graduate who knew Arnautoff through her artist father.

Arnautoff was a prolific muralist who taught for 20 years at Stanford University. After the death of his wife in 1961, Arnautoff left the U.S. and returned to the Soviet Union in 1963, settling in Ukraine. He published a memoir, created large tile mosaics, and had several art exhibitions. He died in Leningrad in 1979. 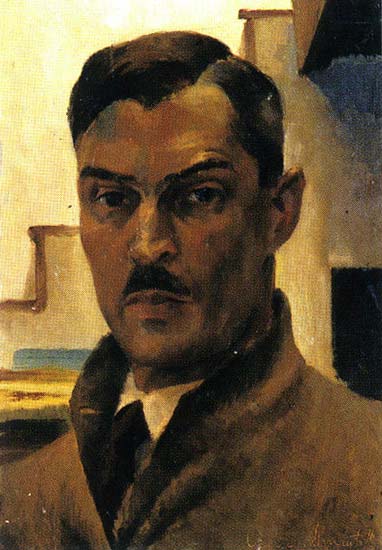 ArtNews said, “The debate over the Washington murals has stirred up bigger questions about how to approach depictions of dark historic events, especially within educational institutions. Should these images be preserved to learn from, or removed so as not to be venerated? What’s more, does it help or hurt students to witness challenging material that may make them uncomfortable in the classroom?”

Some people had lobbied for the artist’s legacy. Three months ago, the Russian Community Council of the U.S.A. created an online petition to preserve the mural. More than 1,000 people signed it.

Lope Yap Jr., the vice president of the school’s alumni association, told the New York Times, “The content and the art quality is priceless. Every day — in contrast to opponents — teachers, librarians use it as a teaching point. No matter where I go, no matter who I meet, 85 percent of people are in favor of retaining the murals.”

New York Times columnist Bari Weiss went further, and wrote, “The implications of this logic are chilling. What happens when a student suggests that looking at photographs of the My Lai massacre in history class is too traumatic?”

On the other side, some say the emotional damage to students was the most important factor. “Think of all the families, the children who have walked through there,” said Joely Proudfit, professor of American Indian Studies at California State University, San Marcos, in an interview with the San Francisco Chronicle. “What images do they see? Dead Indians to the left and African Americans to the right in bondage.”

The school board has yet to decide whether the George Washington murals will be covered with panels or painted over, but the decision has indeed been made to cover them.

« Nike Shoe Controversy Brings Betsy Ross into the Spotlight – Who was she Really?
900-yr-old Viking Chess Piece Bought for $6 Just Auctioned for $1.3 Million »