Over a million people have signed up for a Facebook event to “storm” the restricted military base in southeastern Nevada known as Area 51 on September 20th at dawn. For decades the site has captivated conspiracy theorists, convinced that the 4,000-square-mile desert zone might hold advanced technology from aliens who have visited planet Earth.

Titled “Storm Area 51, They Can’t Stop All of Us,” the event invites users from around the world to join a “Naruto run” — a Japanese manga-inspired running style featuring arms outstretched backwards and heads forward — into the area. “We can move faster than their bullets,” says the event page, which is written lightly. 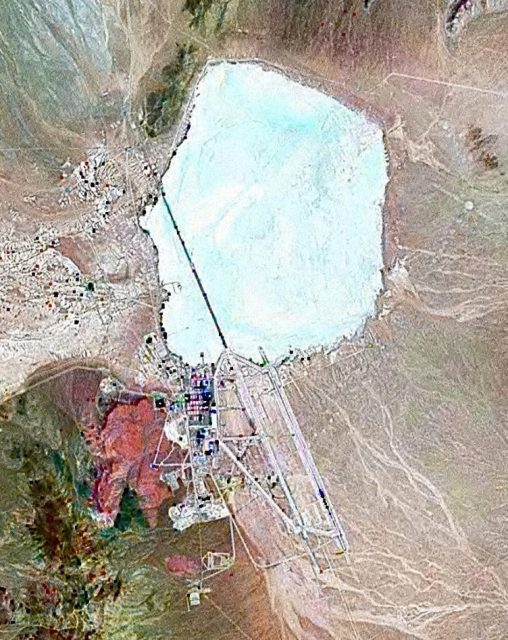 According to the event’s organizers, the raid will require the invaders to run “faster than their bullets,” but it will be worth it to “see them aliens.” An Air Force spokesperson told NBC News the service branch was aware of the Facebook post but declined to provide additional comment. 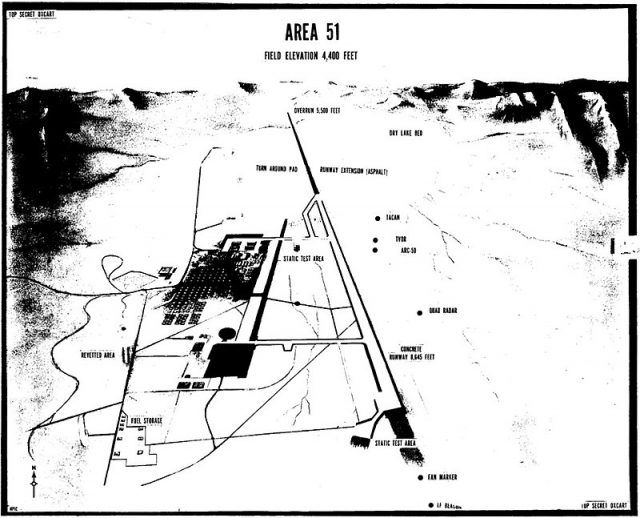 A 1966 CIA diagram of Area 51, found in an untitled, declassified paper.

Officially an outpost of Edwards Air Force Base in California, the site became known as Area 51, which was its designation on maps of the Atomic Energy Commission, at some point in the 1950s. The base is huge, covering a total of 2.9 million acres and 5,000 square miles of restricted airspace. It is the largest combined air and ground space for peacetime military operations in the free world. 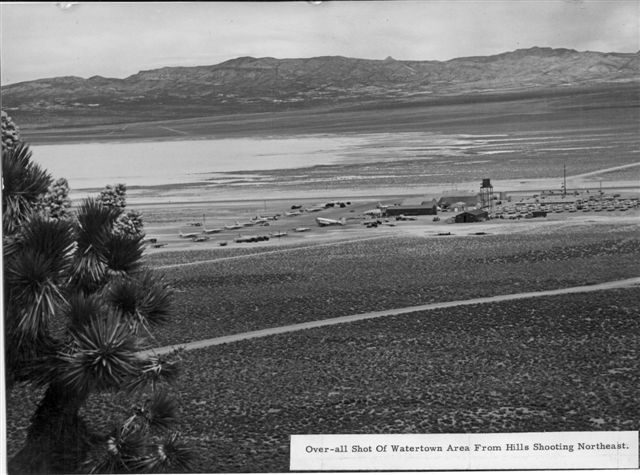 The base’s current purpose is unknown. Theories of its history range from developing aircraft such as the U-2 plane to examining technology obtained through stealth from foreign governments. Some believe the Apollo 11 Moon landing was faked and filmed at Area 51. In the late 1980s, a man alleging to have worked at the installation claimed that the government was examining recovered alien spacecraft there. 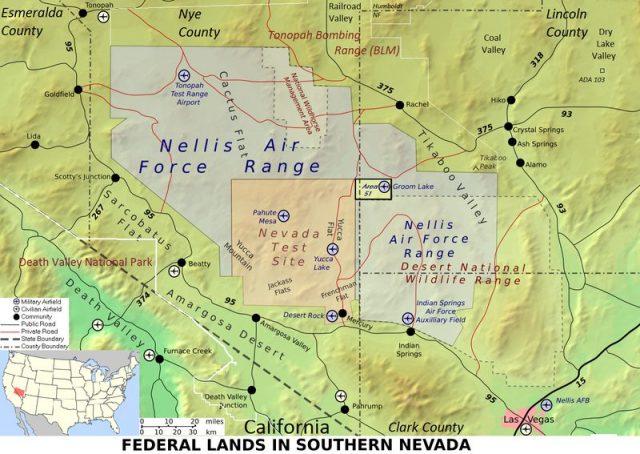 Map of federal lands in southern Nevada including Area 51. Image by Finlay McWalter CC by SA-3.0

The area was officially acknowledged as a military site in 2013. That year the National Security Archive at George Washington University obtained through the Freedom of Information Act (FOIA) a formerly classified CIA document that chronicled the history of the U-2 spy plane. 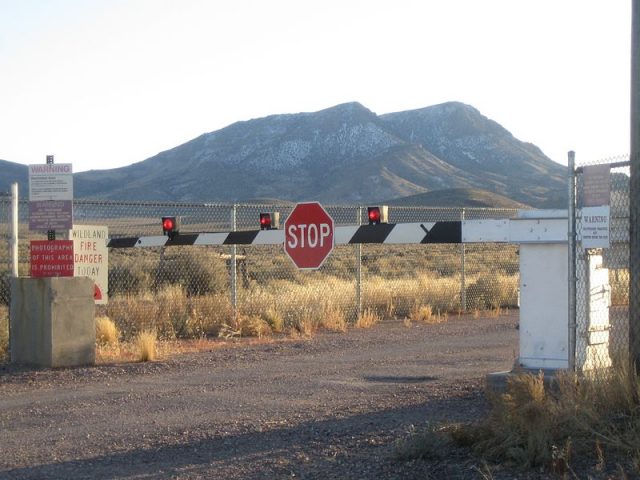 Back Gate to Area 51

The tongue-in-cheek Facebook event comes just a few weeks after a group of  Senators was briefed about reported encounters between the US Navy and an unidentified aircraft that defies explanation. The government’s secrecy regarding Area 51 is no joke. The area is permanently off-limits to both civilian and military air traffic. Security clearances are checked; cameras are not allowed. 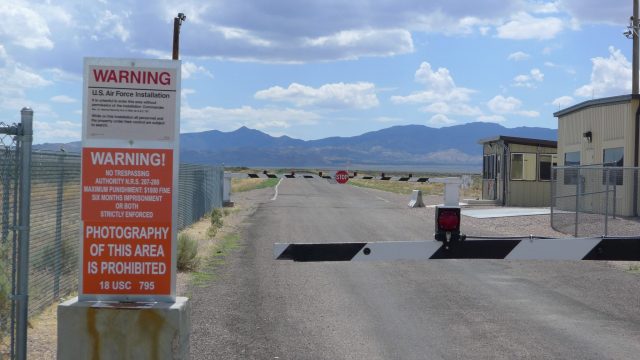 The check point into Area 51 just behind Rachel, Nevada. Photo by notevenathing CC by 2.0

The facility is “strictly a place for testing and evaluating aircraft and associated weapons systems,” said Peter Merlin, a Los Angeles-based aerospace historian who has written extensively about Area 51, in an interview with NBC.  He said that anyone who actually shows up Sept. 20 may find the biggest threats they face won’t be bullets but the unforgiving desert terrain. 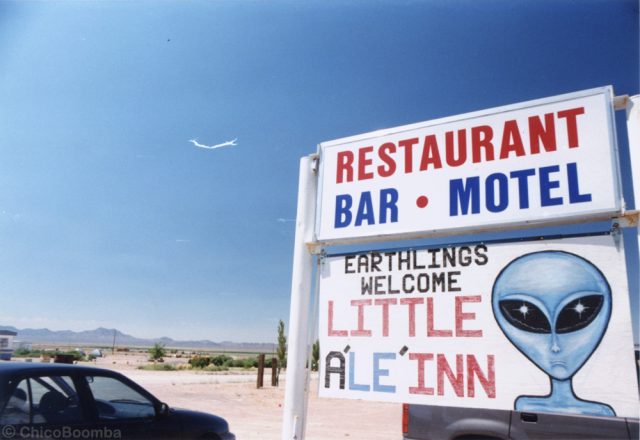 The Little Ale Inn on the Extraterrestrial Highway across from “Area 51”. Photo by Chico Boomba CC by 2.0

“The security guards could just sit back and wait,” Merlin said. “They don’t have to do anything if they don’t want to. The desert will take care of these people.” 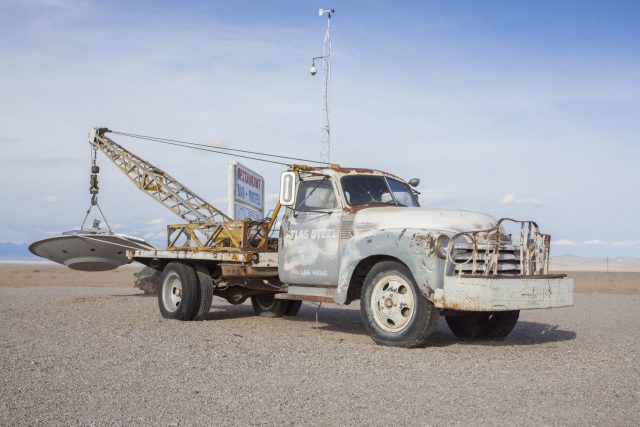 Truck outside of the Little Ale Inn near Area 51.

In 2014, a tour bus carrying visitors to the edge of Area 51 crossed the line and entered the base. The driver and his four passengers learned a quick lesson about how serious Area 51 is about its boundary and its security. Less than two minutes after crossing the boundary, the passengers informed their tour guide that a white truck was right on their tail. “A gentleman in full military garb gets out,” said the guide later. “The one on the passenger side, he had a fully automatic rifle.”

The driver and four passengers were each cited with a $650 fine and a misdemeanor charge. The passengers eventually got their charges dropped, but the driver had to pay the fine and was banned from leading tours in the area.