Perhaps no other female in history has used her feminine charms to such effect as Margaretha Zelle, better known by her alias Mata Hari. During the first world war she cunningly and flamboyantly crossed sides to become one of the most famous double-agents in history. Born in The Netherlands in 1876 she became an exotic dancer and courtesan, spending most of her time in Paris, who was later convicted of being a spy for the German Empire and executed by firing squad in Paris in 1917.

She did not have a happy childhood in The Netherlands. Her mother died young and her father fell on devastating economic hardships. When Margaretha turned 18, she answered a newspaper ad for a wife from the wealthy Captain Rudolf MacLeod in the Dutch Colonial Army. In 1895, they married and went to live on the island of Java (nowadays part of Indonesia) which was a Dutch possession at the time. There she gave birth to two children, Norman-John MacLeod in 1897, and Louise Jeanne MacLeod in 1898.

It was not a happy marriage and soon Margaretha left her husband and moved in with a Dutch officer. During this time she studied Indonesian dance and customs and came up with her famous stage name: Mata Hari, which means “eye of the day” in Malay. Some fabulous colorizations of Mata Hari have been produced by Russian artist Olga Shirnina. 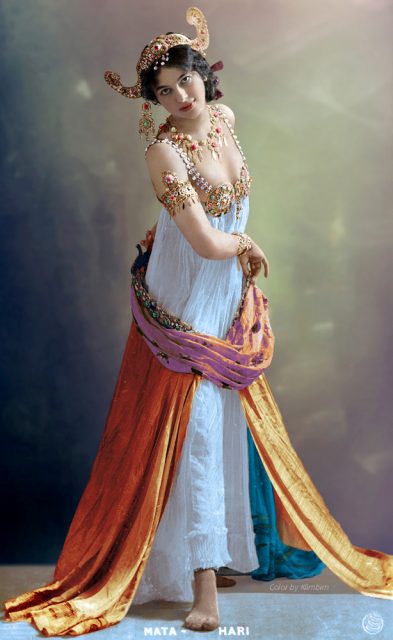 In 1899, her children became seriously ill, her son in the end succumbing to the disease. After the untimely passing of their son, the couple moved back to the Netherlands. where they officially divorced in 1906. Margaretha gained custody of her daughter. 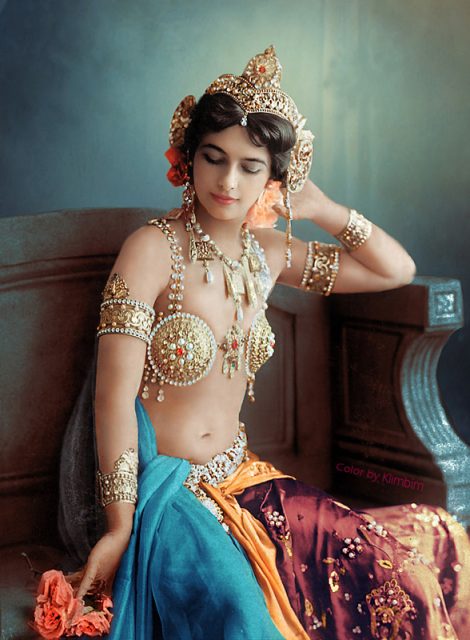 However disaster struck when, after one of the arranged visits with his daughter, the Captain refused to give the child back to Margaretha. Women had very few rights concerning their children at that time and Margaretha was unable to get her daughter back. Consequently she was never returned and sadly passed away at the early age of 21. Devastated, Margaretha moved to Paris in 1903 and began her stage life. At first she performed as a horsewoman in a circus and as an artist’s model. Within two years, she had made a name for herself as an exotic dancer – the legendary Mata Hari. 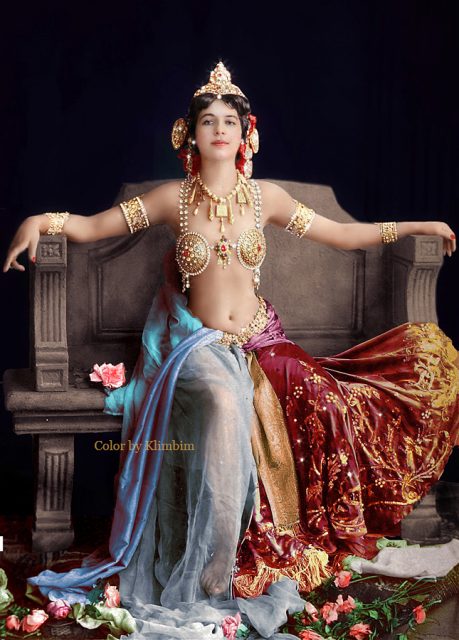 The story behind the Mata Hari persona she assumed was that of a Hindu princess who had been involved in sacred Hindu dance since childhood. She became a sensation, posing for scintillating photographs which showed much more skin than people were used to at the time. She mostly wore East Asian styles of jewelry, especially her signature headpieces and jeweled bras. 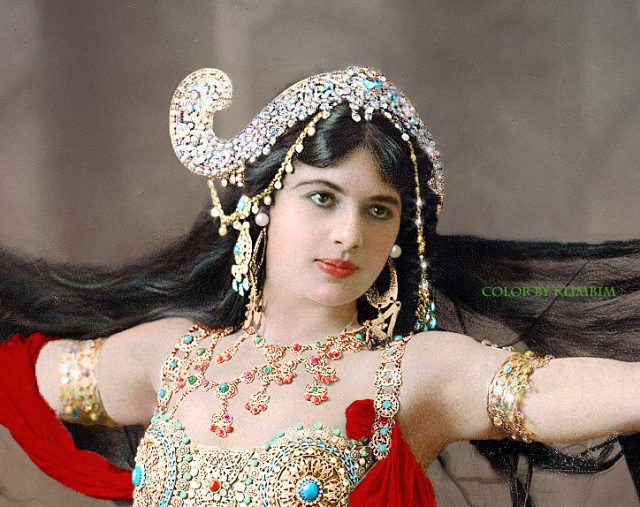 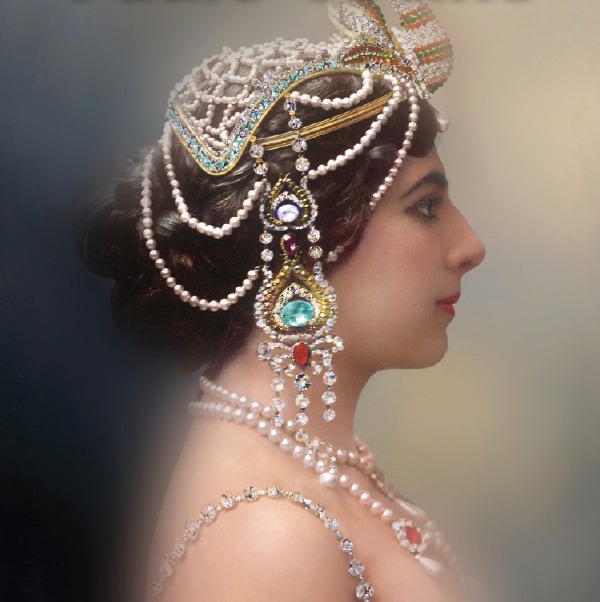 Her style of dance was all the rage in Paris. She helped to popularize exotic dancing due to her acceptance in wealthy social circles and attractive free spirit. She had publicized affairs with military officers and high-ranking politicians, allowing her to cross international borders freely. However, when the first world war commenced the public’s attitude swiftly changed and her promiscuous behavior and lifestyle were no longer seen as desirable or acceptable. Due to this public disapproval and her aging body, her final performance was held in 1915. 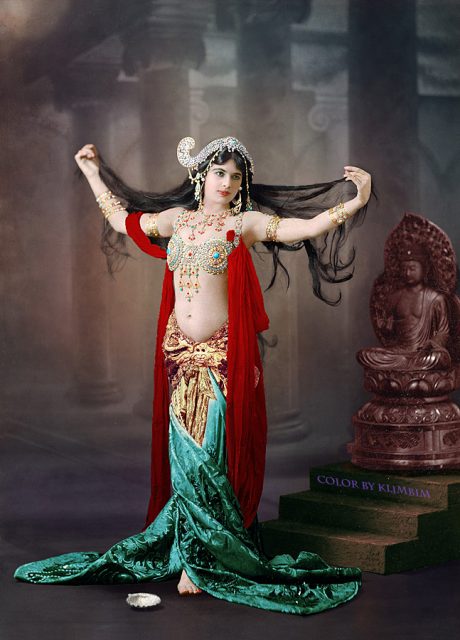 She returned to The Netherlands and, in 1916 was approached by the German consul who offered her money in exchange for being a spy. Out of work and without any real loyalty to either side, Margarethe accepted and became Agent H21. French author Frédéric Guelton says of her decision: “At the time she imagined that she would spy by manipulating men, the way she had before the war. She didn’t have any political or ideological convictions. Her only conviction was living the good life.” 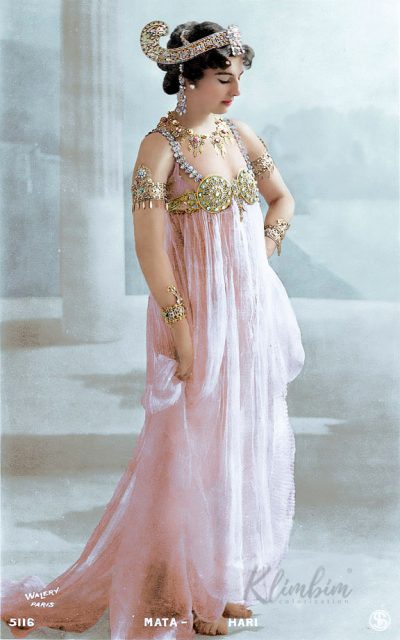 During her time back in Paris, Mata Hari soon became involved with Captain Vadim Maslov, a Russian pilot serving in the French Army. When he was shot down over Germany, she obtained permission from France’s foreign military intelligence agency, the Deuxième Bureau, to visit him beyond enemy lines. However the one condition was that she become a spy for them. And so Mata Hari became a double agent. 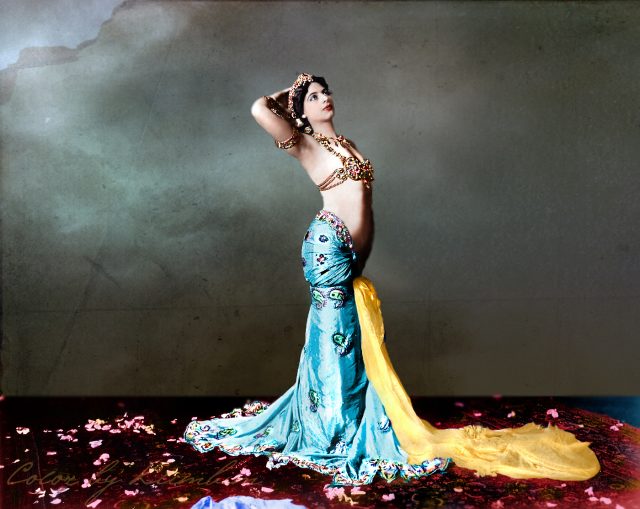 Her well-known dancing shows for Crown Prince Wilhelm of Germany led French Captain Georges Ladoux to believe she could seductively acquire enemy secrets. Unknown to the French however, the Crown Prince had little to offer in terms of valuable intelligence. 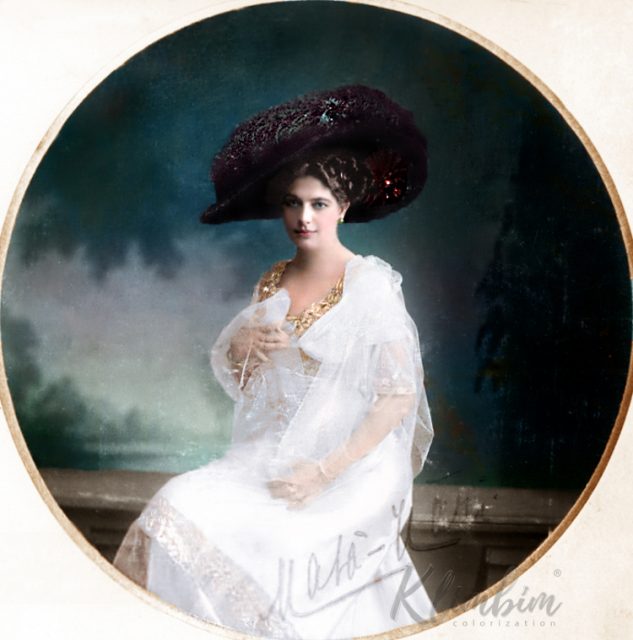 Margarethe made arrangements to meet with the Crown Prince and to see her lover by offering to share French intelligence with the Germans, while at the same time on a mission to gather intelligence for the French. When General Walter Nicolai, chief intelligence officer of the German Army, realized she had nothing more than gossip to offer, he accused her of being a French spy and sent her back to France. 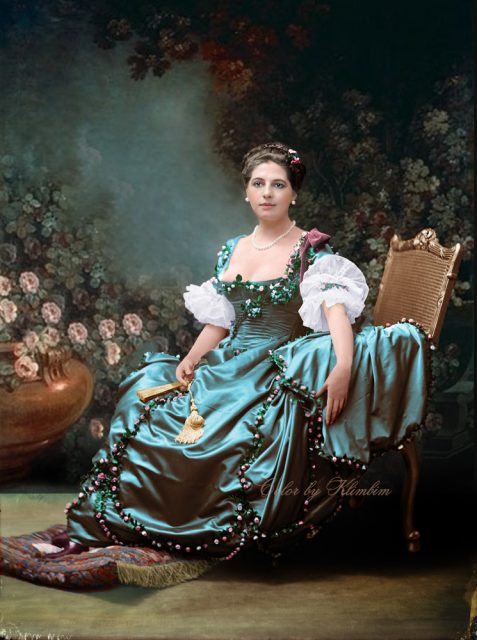 Upon returning in 1917, Margaretha was arrested in Paris, allegedly carrying a German check on her for a substantial sum. She was put on trial, accused of spying for the Germans and blamed for the fate of fifty thousand soldiers. She maintained her innocence, but the angry public of France, which at the time was suffering huge losses in the war, was having none of it. To make matters worse her Mata Hari persona was exposed as being false, which further shattered her reputation and credibility. Her lover Captain Maslov abandoned her and refused to testify on her behalf. 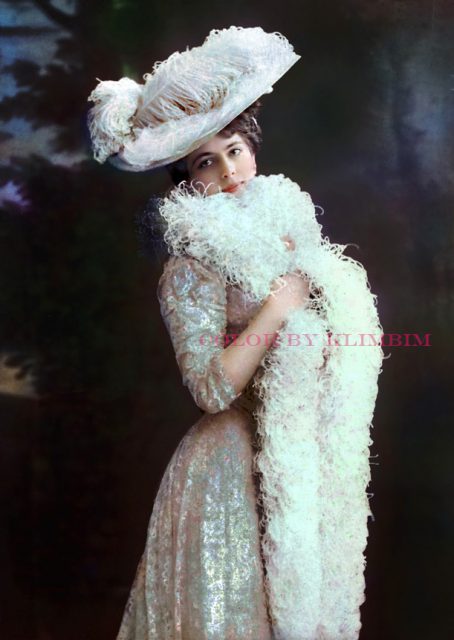 In regards to how she’s historically viewed, British historian Julie Wheelwright has stated about Mata Hari: “Margaretha was an independent woman, a divorcee, a citizen of a neutral country, a courtesan and a dancer, which made her a perfect scapegoat for the French, who were then losing the war. She was kind of held up as an example of what might happen if your morals were too loose.” 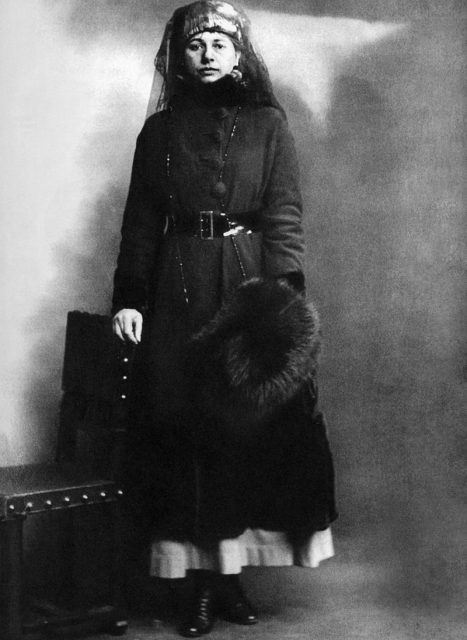 Author Frédéric Guelton commented “There was enough evidence to sentence her to jail for having been recruited by the Germans, but execution… She didn’t deserve that.”

At age 41, after blowing kisses to her executioners and refusing a blindfold, Margaretha Zelle faced her death before the French firing squad on October 15, 1917. With the passing of time her Mata Hari persona has assumed an elevated, almost mythical status as numerous films (such as Greta Garbo’s legendary 1931 portrayal), plays, and books have presented her as a mysterious and cunning femme fatale. The ultimate exotic spy.