Ever wanted your own Saturn 1 rocket? For anyone with the means to transport it, it can be yours. Live or work in one place for a long enough time, and you being to accumulate a growing stockpile of, well… stuff. That’s true for the average person’s home, but it’s equally true for organizations, even NASA. According to news site cnet.com, NASA’s Marshall Space Flight Center (MSFC) in Alabama has ‘excessed’ a Saturn 1 Block 1 Booster, which is part of the Saturn rocket, and the space organization is looking to find it a good home.

The booster itself is the bottom-most stage of the Saturn 1 rockets.  It’s a beefy apparatus designed to power out of the Earth’s atmosphere, and a precursor to the Saturn V that was used for Armstrong, Aldrin, and Collins’ historic trip to the moon. The MSFC was a major player in the development of the Saturn rockets in the 1960s. 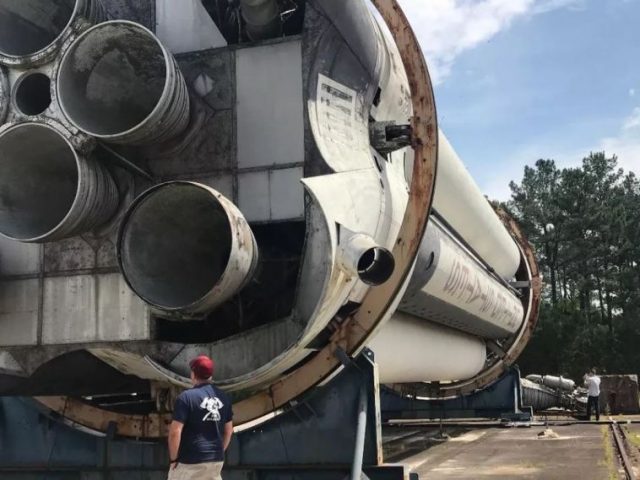 If you find yourself in the market for a rocket, there are two things you should know about this one.  The first is that it’s in mint condition and has never been used.  If it had, it would be at the bottom of the ocean somewhere, and not available for interested parties.

The second thing you should be aware of is that even though NASA will ‘re-home’ it for free, there is one catch.  Whomever takes the rocket has to pay the whopping $250,000 cost to have it shipped.  The cost for transporting the behemoth certainly puts most individuals out of the running for getting it, but shouldn’t be a problem for many museums or educational institutions.

Saturn 1B rocket on display at the rocket garden of the Visitor’s Center at Kennedy Space Center in Florida. Photo credit: Dan Broadbent. His article and science blog can be found here.

NASA does pre-screening for applicants who might be interested in obtaining this piece of our nation’s space history.  If you either have the cash to burn, or are part of an institution that would be interested in having the rocket, you can start the prescreening process here.

The agency is still in possession of a lot of equipment from both the Apollo era and the shuttle program.  Some of it can be found in the rocket garden at the Kennedy Space center, but much of it is still in various NASA facilities, taking up — pardon the pun – space. 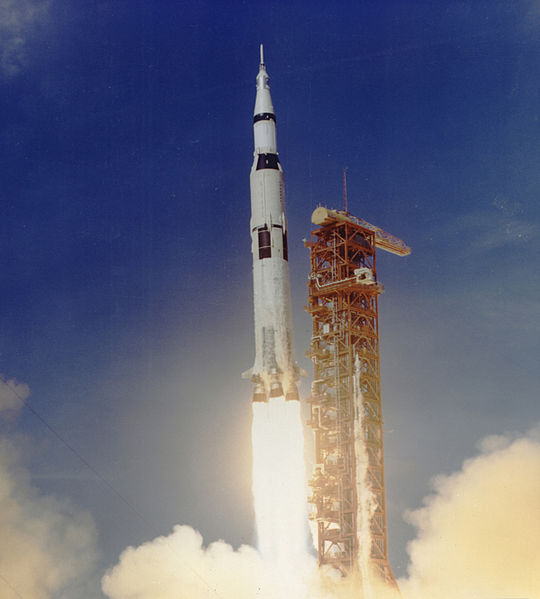 They have other bits of equipment available for those that are interested in obtaining items which have a significantly lower cost to ship, ranging from dehydrated food packets to bits and pieces from the shuttle program ranging from thermal blankets to strike test plates and shuttle tiles.

Currently, they’re even offering a turbine blade.  You can see photos of the various items currently available and the cost of having them shipped if you follow the link for pre-screening.  Unlike the hefty tag for shipping the Saturn 1, any of the smaller items can be shipped for less than $40, making them much more easily accessible to smaller schools and libraries.

The main reason for having all of that outdated equipment cluttering up the corners is a pretty straightforward one: moving it is an expensive nuisance.  If it’s in a place where it’s not taking up space needed for something more current, or it hasn’t been purchased, it’s simpler, cheaper, and more convenient to just let it stay where it is.  When that becomes a problem, NASA often offers items, such as this rocket booster, to cultural and educational institutions, which is a win-win for both of the groups involved.

It’s refreshing to find out that even NASA isn’t immune to the tendency to keep holding on to its old stuff, and exciting to know that when they finally need to clean out the corners in their facilities, they do it in a way that makes it possible for average people to touch the mysteries of space.