Sometimes a good cleaning of the kitchen and a little reorganization can make the space feel refreshed, sometimes it can lead to a Medieval artwork. For one woman in France, finding an extremely valuable 13th century painting that had originally been appraised for a 6 million dollars but just recently sold at auction for a whopping 24 million euros ($26 million)! This enormous windfall was the last thing she expected when getting her kitchen in order.

On rare occasions, folks do discover that something they’ve had for ages, sitting in plain sight and right under their noses, so to speak, turn out to have great value. That lucky individual could forget the reorganizing and just buy an entirely new home. Having such a treasure merely hanging on the wall and not knowing its value — that’s not just luck; that’s like having heaven itself in your corner!

An elderly woman in Compiegne, France, had exactly that kind of terrific good fortune recently when she was reorganizing her kitchen. During the work she found what she thought was perhaps an old religious artifact of some kind, and fortunately she took it to experts for their appraisal. The artwork in her kitchen, the experts discovered, was a small Medieval painting by a 13th century Italian painter, who went by the name Cenni di Pepo, but also Cimabue.

The painting, done on wood, is part of a polyptych, a series of several paintings done of a number of panels. This one measures approximately 10 inches by 8 inches. The unexpectedly high price it received now makes it one of the biggest selling medieval paintings of all time and the eighth highest for a medieval or old master painting. It now ranks alongside artists such as Leonardo da Vinci, Rubens, Rembrandt and Raphael to be included in the list of the top 10 most expensive old painting sales.

“When a unique work of a painter as rare as Cimabue comes to market, you have to be ready for surprises,” said Dominique Le Coent, who heads the Actéon auction house in Senlis where the sale took place. “This is the only Cimabue that has ever come on the market.” 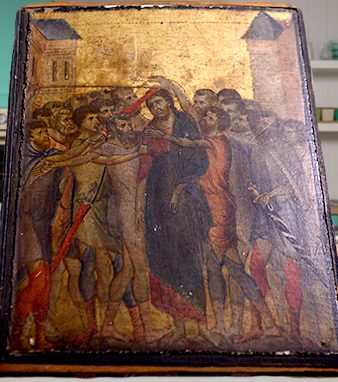 (Not surprisingly, the woman’s name has not been released to the media).

The painting, “Christ Mocked,” was examined by art appraiser Eric Turquin. He told The Art Newspaper that, when he compared “Christ Mocked” to other works in the series by Cimabue, he knew almost immediately that it was a genuine masterpiece. Although they used infrared to authenticate the painting’s provenance, something else confirmed the date it was painted, something that had nothing to do with science and everything to do with nature. The telltale signs of a little critter were present, and that gave Turquin the final reassurance he needed. 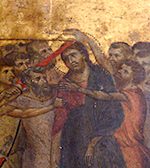 Close up of the painting

Wood eating bugs leave distinct traces, and they were there on “Christ Mocked,” as they are on other panels in the polyptych. “You can follow the tunnels made by the worms,” he told The Art Newspaper. “It’s the same poplar panel,” he explained, as other works the artist did on that particular wood.

Cimabue lived from 1240 until 1302, and several of his works hang in the Louvre, France’s famous and prestigious museum in Paris. This particular painting will be put up for auction on October 27th. It marks the very first time the painter’s works have ever been put up for auction, and some sources say it could fetch as much as $8 million (USD). The auction will take place at the Acteon Auction House in Senlis, France. 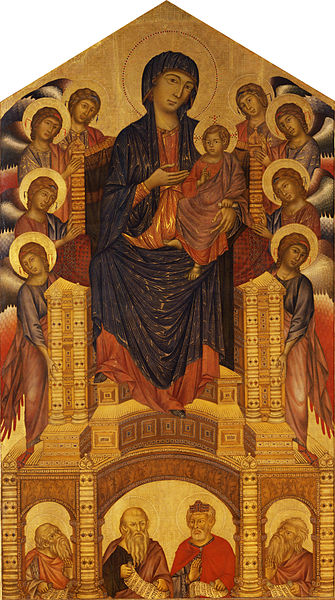 Cimabue’s work hangs in other esteemed galleries too; his paintings are on exhibit at the National Gallery in London, and the Frick Gallery in New York City.  He was considered a vital contributer to pre-Renaissance art, and The Art Newspaper called him “the father of Western painting” in its piece about the discovery.

Related Article: Homeowner Finds Dusty old Painting in the Attic – Turns out to be a Lost Caravaggio

Thank goodness the owner, who is now a multimillionaire, did not decide to simply toss out the treasure while revamping her kitchen.